A Little Damp Around The Edges

Did I mention it poured my last night in Newport?  It rained so hard water came in under the slide topper and ran down the side of the slide to the carpet, which soaked up probably two cups of the nice liquid.  All that before I pulled the slides in, when I had to clean up even MORE water.  I think I need to have that slide seal checked.

Once the mess was cleaned up, I disconnected everything and pulled out to hook up the car.  In two short minutes, I looked like a drowned rat!!  It wasn't raining as hard as at night, but it never did quit.  I'm pretty sure there was more dirt on my floor than in the campsite I just left.  At any rate, we were OFF to greener pastures .... or rather WETTER pastures. 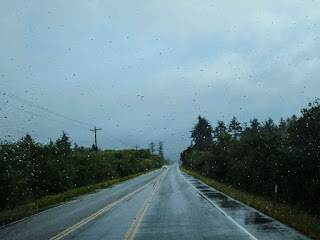 I crossed the bridge having the distinct feeling I missed most of the town.  There just weren't enough hours in the day to check out all my haunts, including Pacific Seafood, Nye Beach and the lighthouse.    I'd like to spend more time on the way back, but a September Rally in Santa Cruz has cut my time short everywhere else.  Maybe I can hang out there for a few weeks. 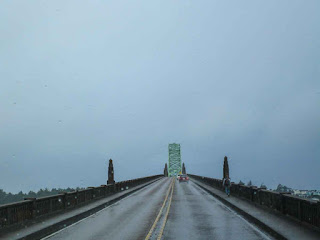 The ocean was roaring ... perfect for pictures ... but I couldn't stop.  Dixie at the Tillamook Elks Campground said to get there early to be sure I got a pull through spot.  She was right!! 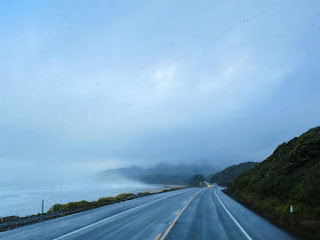 Just before getting into Cheese Country, the sun came out, but not in time to keep this little red car from sliding off the wet road.  There is something to be said for following the speed limits. 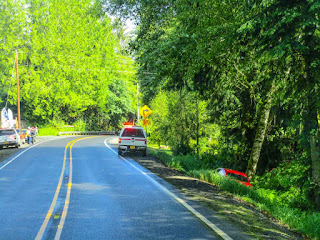 I KNOW you know where this is.  Once I was parked at the Elks campground, my first stop was Jane's Fabric Patch, but when I saw the bus out front full of 40 women unloading and couldn't even get in the door, I kept right on going to my second favorite place.  Can you say CHEESE? 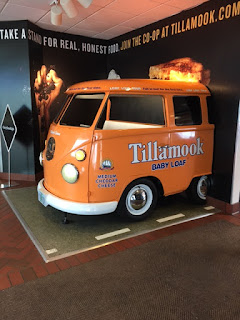 As usual, I worked backwards.  First thing in the door, I headed for the ice cream counter.  This is Fireside S'mores.  You should pass on this one.  It was chocolate ice cream with soggy crushed graham crackers.  They completely forgot the marshmallows!!  For $2 I can't complain however ... it WAS good chocolate ice cream. 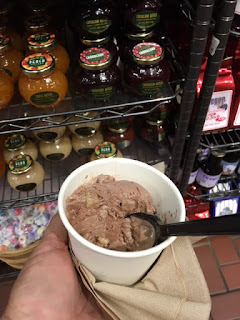 I snagged my other favorite, Tillabars.  Yummy vanilla ice cream with a tart lemon center, all smothered in white chocolate.  YUM YUM!!  I know friends Dave and Marcia will be jealous ... this is their favorite too!! 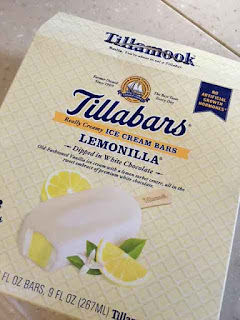 While waiting for the bus to leave, I ran back home to deposit the ice cream in the freezer.  As long as I had all that great extra sharp white cheddar and Monterey jack, I might as well make a grilled three cheese sandwich.  I was in heaven!!! 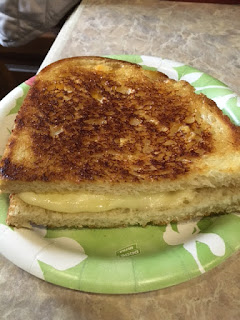 With my stomach no longer a distraction, I drove back to Jane's to pick out fabric for my new bedroom quilt.  Almost two hours later, I finally had my selections, just as they were closing early.  After all, it was Sunday!! 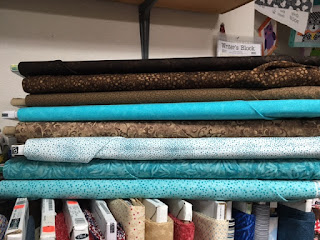 On the drive back home, it bothered me that I didn't have time to stop at the Tea Shop or the Yarn Store.  Do you ever feel like you just didn't get to see everything? 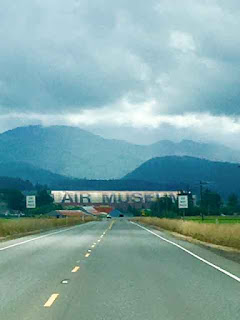 I'm off early again this morning, traveling to Seaside where I will finally set down roots for three weeks.  I hope to get in lots of kite flying ... I REALLY need the practice!!  I haven't flown since last year, meaning I'll be lucky if I even remember how to set them up!!!

Diplomat Agent Ralph Lloyd has solved all my problems today.  He has just arrived at the airport with my valued ATM card of $4.8 million mines ago (must be auto correct ... I think he meant minutes) and wants to confirm my name, address, phone number and email.  I guess I'm IN THE MONEY NOW!!!  Good grief ... will these guys never give up???