As if single whammies aren't enough, I had a DOUBLE whammy yesterday and this morning.  It was 80 degrees at 9:00 am when I packed up the rig and headed off on yet another untraveled road.  I suppose I should brave the freeways a little more.  Highway 20 went straight over to I-84 where a Flying J Truck Stop lived.  The beast needed breakfast and a little extra for lunch.  After 25 stoplights and 45 minutes, I pulled in to the fuel bay backwards, to the applause of ten truckers fueling up.  There was no way in from my direction of travel.  What's up with that?  Next time I'll take the freeway. 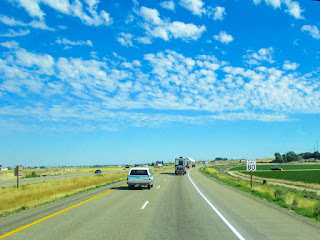 Since the entire drive was uphill, I figured the weather would cool off, but that was not to be.  It promptly rose to 95 as I kept an eye on my rig's temperature gauge.  MY temperature gauge wasn't working.  About ten years ago I got heat stroke sitting at a ballgame.  It snuck up on me, even though I was drinking plenty of fluids.  Ever since, my thermostat runs about 10 degrees hotter than everyone else, meaning I don't do well in the heat. 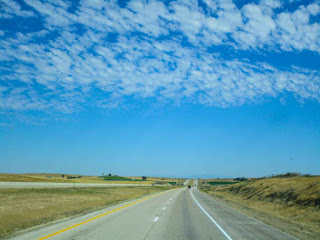 I crossed over into Oregon for another big WHAMMY.  I'm going straight north, so who would have thought there would be a time change involved?  Heat and time change ... YUP ... double whammy!! 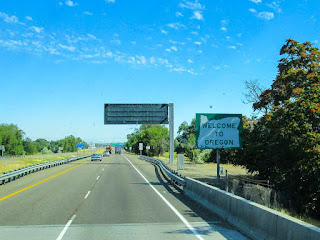 Oblivious to the upcoming assault on my brain and body, I cruised up through the beautiful bare mountains of desert.  Trucks and cars were flying by at the usual rate of speed ... 70 for trucks, 80 for cars.  I cruised along at 60 enjoying the scenery. 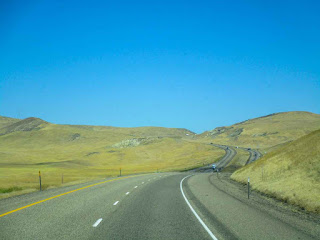 When I got to Baker City, I saw probably a hundred people walking alongside the road.  It took awhile for it to sink in.  This is Oregon Trail country, and these people are re-enacting the saga ... in long sleeve shirts and long skirts .... and it's 93 degrees out.  Most were pulling wagons by hand.  What happened to the horses??? 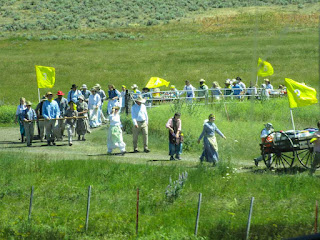 I arrived at Hot Lake Springs RV Park,  and have a full hookup for $31 a night.  Several of our Golden Spike group were already here, with another 6 following me in.  Thankfully, it's a 50 amp site with great power that kept BOTH of my AC units running yesterday.  As the temperatures climbed, I slowed down to a crawl.  That's when it dawned on me that my lackadaisical attitude was from the heat over the last few days. 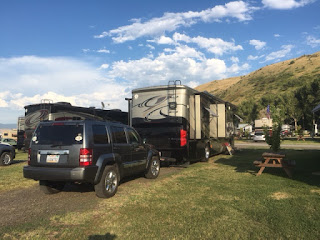 When happy hour came around, I decided they cancelled the event ... no one showed up at 5:00.  Pretty soon, I saw someone carrying chairs over to the shade tree.  It was then I realized there was a time change ... it was only 4:00.  So you KNOW what happened this morning ... I was up bright and early at 4:00 am!!!!  Hopefully I can adjust quickly.  I'm afraid I'm stuck with the heat ... 77 degrees in my rig when I got up.  I turned on all three fans and opened several windows.  It finally feels nice ... YAWN.

Not much on the schedule today as the rest of the troops arrive for this train riding rally.  It appears there will be a Mystery Adventure when Dan and Patty Chance arrive around noon.  That sounds exciting!!!