I don't know why I'm so fascinated with old prisons.   Maybe it's because of the Old West Cowboy shoot 'em up movies I used to watch as a kid or because I'm just hoping one of their ghosts will show up in my camera or maybe I just like the bad boys.  At any rate, I spent a good portion of yesterday in the Idaho Penitentiary which finally closed it's doors in 1973. 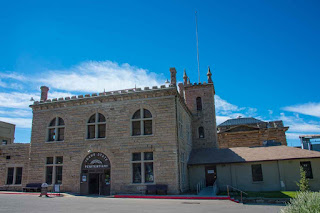 The buildings are pretty spectacular, having been built by the prisoners in 1872 using stone they quarried very close to the site.  The Wardens here were thrilled to announce to the world they had saved the State of Idaho $800,000 by using prison labor.  I guess that's what the Judge meant when he sentenced them to hard labor. 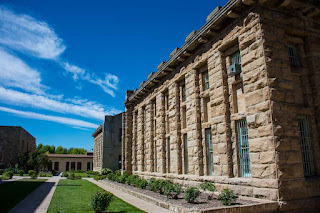 If you thought being self-sustained was a new thing, these guys have been doing just that since day one.  Every prisoner was assigned a job, including growing vegetables in the corner of the yard.  Eventually, they added on a huge yard surrounded by steel fence, where they raised chickens, hogs and all the groceries used by the prison.  Finally, they began to work the Prison Farm, purchased for $75,000, growing wheat, oats, corn, barley, vegetables and all kinds of livestock.

These buildings were used as a recreation area, the commissary where they could buy what they grew and later, a hospital/quarantine area saving thousands of lives in a flu epidemic.  In their spare time, not that they had much since they worked so hard, they were allowed to make crafts and sell them in the prison store to make extra money for themselves. 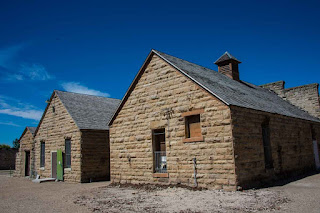 The stories these walls could tell.  This is Cora, who was sentenced to nine months for adultery, even though she and her husband were separated.  Back in 1908 they put the women in the same prison as the men, causing all kinds of problems for the Warden, as you can imagine.  Cora was finally pardoned, but that law is still on the books, so be careful if you come to Idaho. 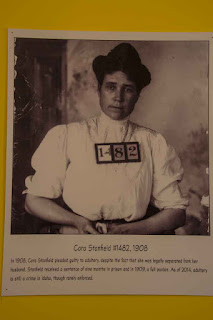 Another way to save money was for the prisoners to wash all their own laundry.  They were so good at it, they enlarged the facility and washed all the uniforms from the Mountain Home Military Base. 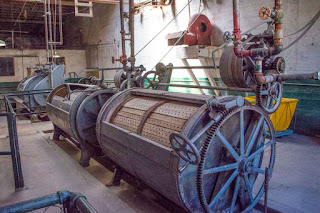 Here's the mangle iron they used ... a slightly larger version than I used as a kid.  They solved the lost sock problem by only using ONE dryer for ALL socks.  If a sock's mate could not be found, it was hung on the wall until another similar one showed up. 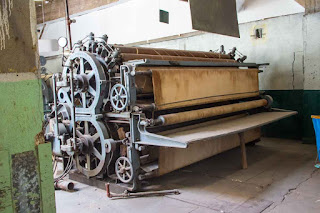 Other jobs included working in the steam plant which provided all the heat and energy used by the prison, as well as shucking and canning peas (sold for profit), pitting fruit and peeling apples, not to mention raising hogs and cattle for milk and meat.  These guys would do anything to keep from spending 24 hours a day in these 4-person cells. 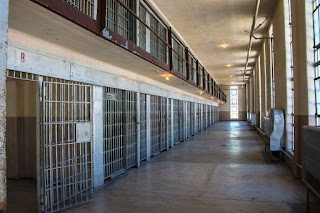 Eventually they allowed prisoners to decorate their cells, thinking it would make them happier and therefore less of a problem.  The square hole in the triangle to the left was for eavesdropping on inmates.  There's a big hallway behind the wall for maintenance of plumbing, also used to spy on anyone who might be plotting an escape. 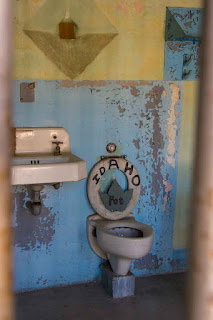 There were a few escapes, including a couple of women, but most were recaptured using the Prison Hound Dogs who tracked them down.   Many ended up in this section, Death Row. 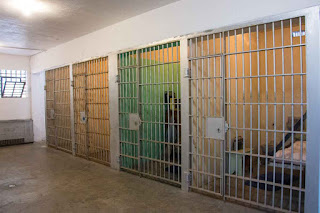 Over the years, there were only a handful that were hanged from the gallows in the outside yard for all to see.  When this unit was built, Ray Snowden spent his last days here for murdering his friend/girlfriend. 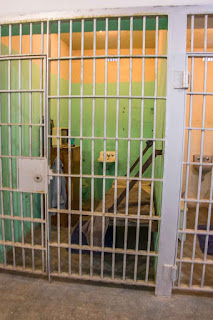 This room, right next to the above cell, was the chamber built for that purpose.  From the time we entered this building, I called out to Ray who is supposed to haunt the area.  I was hoping he would make an appearance and scare us real good.  Alas, I didn't meet up with him.

You can see the trap door on which he stood with the release lever to the right.  The dark shadow on the left is my camera reflection in the window.  But WAIT!!  See the two blue dots on the wall next to the shadow??  I looked at every picture I took of this room and that wall is solid white.  Even pictures I took from the exact same spot.  Ray ..... Is that YOU???  Talk to me Ray!!! 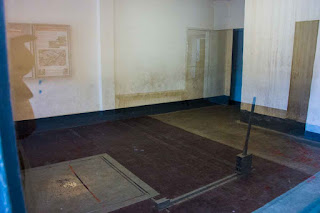 With all the female problems they had (including magic pregnancies), this building was finally surrounded by a rock wall and called the 1920 Womens Ward.  Lyda Southward spent her last days here after boiling down fly paper to get enough arsenic to kill her husband.  When they found out her last three husbands died the same way, she was dubbed Lady Bluebeard.  The guards said she could charm the wildest cat, let alone all the menfolk she encountered. 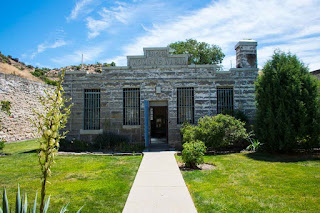 This is all the room the women were allotted ... two to a cell.  One had to stay in bed while the other got dressed since there wasn't enough room for two.  They didn't work like the men did, but they were allowed to make crafts, play cards and socialize in the central area all day long. 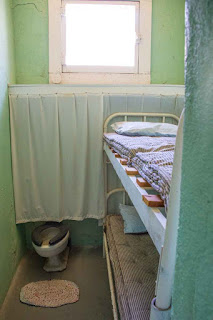 So many more pictures and stories to show and tell, but it's time to move on.  By the way, my camera keeps count of the number of shots I take.  I just crossed over the 10,000 mark where it starts back at number 1.

From the prison we went to the Boise Depot ... a story for another day ... and on to tonight's baseball game.  The Colorado Rockies A team ... not triple A or double A but their "A" farm team, plays right next to my RV park.  I know that because I heard the announcer half the night like he was right outside my door!!  On Tuesday, for a measly $2, you can sit in the sun and get a free hot dog.  Our plan is to barbecue our OWN dogs and sit in the shade.