BBQ In A Box

While wandering around the house yesterday trying to remember everything I needed to take, I spotted my new Q1000 barbecue sitting on the patio.  YIKES!!  I can't forget THAT!  Sometimes I should just sit and watch television instead.

I unhooked the little propane tank, actually remembering there was a little cover for the valve.  Trouble is, I couldn't find it.  The little yellow strap was there, but the cover was gone.  That's when I remembered cleaning up and throwing it away.  Gosh darn it!!!!!  I thought it was from the little tank, not my bbq!!

That's also when I realized the entire inside is covered in grease and crud.  I did a quick clean, brushing most of it into the little pan underneath, which I totally forgot about as I placed the really nice fitting cover over the top.  Of course the only box I had to put it in was a little small ... don't want grease all over the motorhome bay, you know ...  I stuffed it in.

That's when I realized I had forgotten to take the nasty grease-filled pan OUT and throw it away.  But NOT before it spilled on the bottom of the box.  Good grief!!!  I un-stuck the bbq legs, scraped and bloodied my knuckles, took the pan out and replaced everything back in the box.  It fit nicely in my only open bay area.  When I checked on it later, I noticed grease along the entire bottom of the box.  (Big sigh)  Now to find ANOTHER piece of cardboard to put UNDER the box. 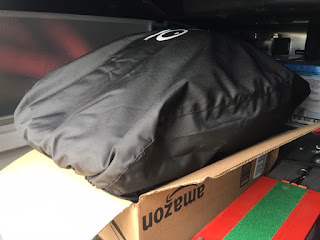 Since I was on a roll, even if it was DOWNHILL, I trotted off to Harbor Freight (gotta love 'em) to pick up some allen wrenches.  $8.99 and I was in business. 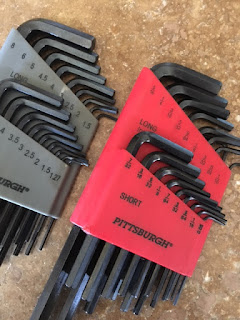 I fixed the hose attachment on the power washer and drug everything out to the porch.  I vaguely remember something about letting the water flow through before turning it on, but nothing came out the hose.  It's that mechanical thing again!!  I reread the directions three times before giving it another shot.  Finally ... water came out the end of the wand, so I stood as far away as I could and flipped the "ON" switch.

YAY!!!  It's working .... or maybe not.  It would start spraying, then stop.  I know from experience when you hear a motor screaming, it's not a good sign.  I turned it off.  After three times, just when I was ready to give up, it started working.  I'm guessing there was still air in the lines or something, because it began to purr like a kitten as I aimed the wand at the ceiling.  YAY!!! 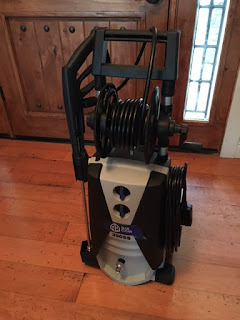 Just so you know, pointing a powerful spray of water at the ceiling instantly removes all the spider webs and bug carcasses, whereupon they immediately land on your head!!  In two seconds I was a wet buggy mess!!  Pretty soon I got the hang of it and cleaned away years of dirt and bugs.  SUCCESS!!  Sort of anyway ... by the time I was done, I needed to turn the power washer on myself. 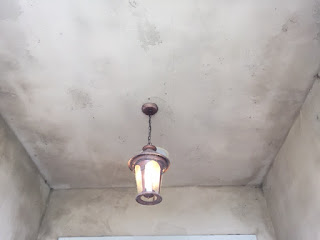 Honestly I didn't do that great of a job, but it's better than it was!!  I'm taping the instruction manual to the back of the unit, just in case I forget by next time.  On a side note, do you know how hard it is to get wet spider webs and dead bugs out of curly hair???

Since I received notification this morning that I won the MILLION EURO LOTTERY and now have financing from some foreign bank for that yacht I've been eyeing, I can probably afford to hire a full time maintenance man.  Experienced, mechanically-inclined applicants, please apply within.