It's time to start the countdown to take off and hopefully a little respite from the hot weather.  103 yesterday at my house and it's predicted to be up to 105 today.  I've found the coolest place to be is laying on the grass with Cooper in the back yard.  With all the water I've been pouring on it, it's very refreshing!!

One of my RV friends Rex sent this little cartoon to me.  Yes Rex, that is exactly how it feels.  I'm so excited to have another one complete, especially if it turns out nice!!  Sometimes it's like "nope" ... this one is being donated!!  You really do put your life into these quilts while they are in process.  I can almost tell you what television program I was watching while I was sewing each one!!  The good news is I can just whip out another pattern and start on the next of 35 I still have in my closet waiting to be brought to light!! 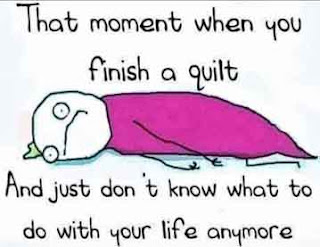 On the other hand, THIS one was a definite donation until I saw the quilting.  It instantly became a keeper.  The trick is to sew the binding very   S  L  O  W   so it takes a long time to finish!!  Now I'm looking for a way to display them ... a ladder-like contraption. 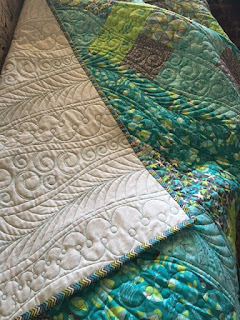 I spent most of the day making sure all my BIG payments were made ... mostly insurance and DMV stuff so I don't get in trouble while on the road.  I actually keep a list and check them off.  With company coming for the night, I tried to come up with something for dinner ... but failed.  Applebees it is.

The biggest challenge was trying to get rid of the queen bed that's been haunting my guest bathroom for the last month.  It was a good place to keep it away from the dogs while I waited for the donation people to pick it up, only they never showed.  I finally told them "I" would haul it to their storage facility, only they wouldn't tell me where that was ... I might try to dump off more stuff.

Finally, with a little help from my girlfriend, we got it loaded into my truck.  This morning I'll tie it down and deliver it to the recipient of the bed myself.  I really AM trying to downsize!!

With that done, I'll start on the motorhome.  First up, disengage the multiple families of spiders that have almost permanently glued my rig to the concrete, followed by lots of bug spray!!  Once I finish cleaning the front section, the loading process will begin, not that I have a lot to load.   Since I own two of everything, I never take much OUT.

I'm not looking forward to cleaning the fridge, but that's on the list also.  That leaves giving it a bath and giving the Jeep a once-over.  I'm a short-timer now ... and I can feel the stress creeping in.