Yesterday Was A Scorcher!!

I have to say I really like Boise Idaho.  Even though it's basically at the edge of the desert, there's plenty of water flowing from the mountains and the people are really nice.  That being said, the temperature got to me yesterday.  100 degrees here is about the same as 107 where I'm from.  It was HOT!!  As soon as I stepped out into the afternoon sun, I felt the burn!!  So here's that Train Depot story I talked about at the end of last week.

The Boise Union Pacific Depot was built in 1925 by who else, the Union Pacific Railroad.  Train service was provided by the Portland Rose between Chicago and Portland Oregon. 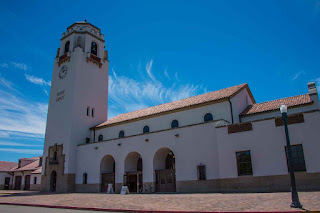 The building is spectacular, reminding me of Union Station in Kansas City.  It's only open two days a week, in case you are headed this direction.  We were lucky enough to catch it with unlocked doors and stepped back in history.  All service was discontinued in 1971 the day Amtrak began operating.  In 1990, Morrison Knutsen purchased the building and restored it to pristine condition. 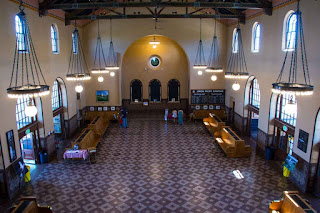 The tower is pretty spectacular ... definitely take the elevator to the top to see the bells and the view.  The bells are still in use and VERY loud.  Eventually the City of Boise took it over and now rents it for special occasions.  For $500, you get five hours of depot fun. 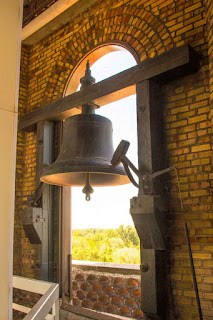 Built in the middle of farmland, this old picture shows what it looked like when first in operation. 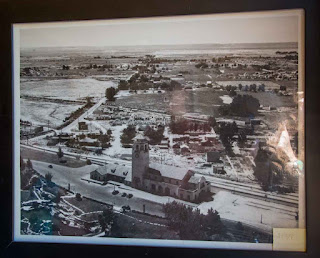 Today, looking at the same view, there's no farmland in sight.  Unfortunately for photographers, netting surrounds the entire tower to keep pigeons out. 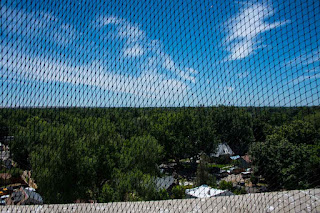 This is the view looking Northeast I think.  You can see Boise sits at the bottom of the mountain range called the Boise Foothills by locals.  Like Los Angeles, it's spread out all over Treasure Valley. 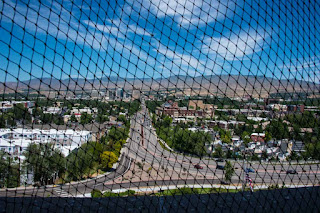 This is Big Mike, a Mikado-type steam locomotive built in 1920.  The name comes from the first     2-8-2 engines being built for Japan.  Used for pulling freight, she (he) ran from Nebraska to Idaho.  Retired in 1956, Big Mike was moved to this location in 2007 and spruced up.  Renamed the MacArthur in World War II after hauling materials in support of the war effort, the new name never took hold. 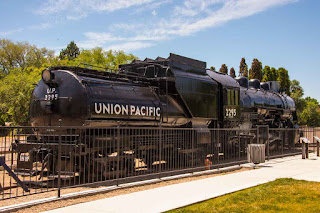 Just below the depot are the Platt Gardens with lots of ponds and koi fish.  Not your typical foo-foo park, you can climb all over every inch of this rock pond. 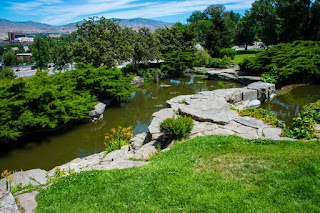 Being a little hungry, we headed off to find food, ending up at the Trolley House.  Originally the end of the line for the Boise Transit System street cars, when the company went bankrupt in the 1920's, it was turned into a restaurant.  In 1976 it was purchased by a family who has kept it in operation ever since. 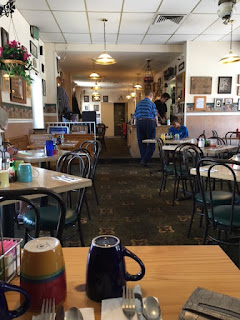 The food was great ... huge portions ... and very reasonably priced.  Check out the pictures all around the walls of this Historical Register building. 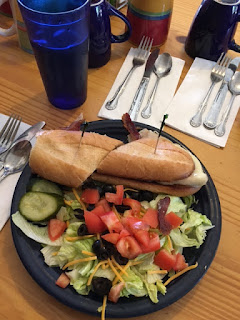 Not that you want to see this picture right after lunch, but I missed this one taken at the zoo.  These are HUGE fruit bats.  Rather hard to see since I was not only looking through glass, but totally in the dark with only infrared light available.  Cute little guys, right?? 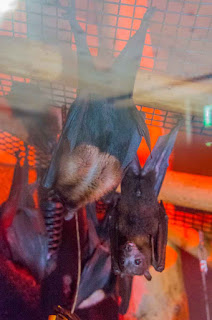 I actually spent most of yesterday snoozing here and there with the puppies.  It was just TOO hot to go out and I needed to catch up on sleep deprivation, between the rock bands and the early morning tap-tap-buzz of probably the inverter.  By the way, the band playing at eardrum-breaking sound level was BOSTON.  Had I known, I might have drug my chair a little closer, not that I needed to be closer to hear!!

My Ex-Sis and I barbecued on her patio under misting fans with entertainment provided by the quail fighting for space on her fence.  Another beautiful but very warm day in Boise.