Lately, I've seen a lot of talk on social media about salesmen.  If their lips are moving, they're lying ... that sort of thing.  Unfortunately, in my experience, that has been the truth.  It's bad enough that nowadays every third phone call I get is from someone selling SOMETHING ... but when they come to your door, it's another story entirely. 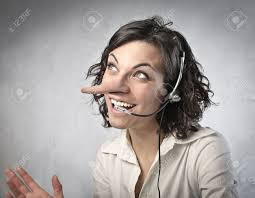 Yesterday, it was a salesman .... woman actually ... from a security service.  Since she was driving one of their vehicles and had on a uniform of sorts (terribly ill fitting, I might add), I opened the door.  That was my mistake.

She went directly into her sales pitch.  She has many, MANY ... emphasis on MANY ... years of experience in the military, specializing in security.  I thanked her for her service.  Without hesitation, she explained to me her mission was to be sure everyone's house was secure ... with HER company's system.

I already have a system ... a VERY good one, installed by my longtime neighbor, friend and security company owner of 35 years.  "Oh I know EXACTLY what you have, but I also know about all the BURGLARIES that have been happening right here in your neighborhood!!"   Really??  That's funny ... I know all my neighbors and no one has had a break-in, and how could you know what system I have?

It was then she put the icing on the cake.  My "friend" she said, (who was also HER close friend) didn't really know what he was doing.  He wasn't into SECURITY, he just installed wiring, and a lot of times he didn't write down what he should, bringing into question many of his installations.  That was it for me!!  You come to MY house to sell me on an upgrade by insulting my friend who just passed away?????  OH H&LL NO!!!

Now I know people need to work ... they need to make a living, and some choose to be salesmen.  I'm very sorry for that choice.  Even my Dad was a salesman after the ranch tanked ... he was in Real Estate at first.  Trouble was, he told the truth about that 200 acres that wouldn't support 20 cows, let alone the 150 the owner was telling everyone.  His career ended rather quickly and he moved over to Farm Bureau insurance, where he thrived because he was so honest with people.

The thing is, I was put off by her SCARE tactics alone, not to mention being totally offended when she insulted my friend.  I said no, then I said no again and finally I said NO NO NO!!!  Okay she said, I'm just trying to save you.  If you choose not to be safe and secure, I understand completely.  It took all my strength not to punch her in the mouth!!

I stewed about that for an hour or so, then went outside and washed the rig to get rid of some of the aggression.  It's all pretty now and made me smile!!  Since today is clean-the-house day, my least favorite thing to do in the entire world .... I'll be able to work off any residual bad feelings.  The good news is I doubt she'll be back!!