Take Me Out To The Ballgame!!

You KNOW I'm crazy about baseball, so when my Outlaw sister Lynda said there was a game, I was all over it.  Let's GO!!  I quickly found out where the park was ... right next door to the RV park, as the announcer called the game loudly on Monday, followed by fireworks ... it was their opening game of the season. 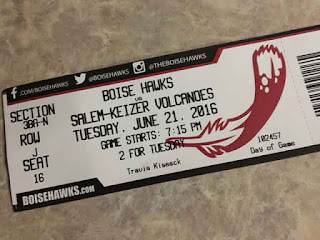 This is the field for the Boise Hawks, "A" league farm team for the Colorado Rockies.  On Tuesdays, you can get a ticket for the game, along with a free hotdog for $2.00.  The down side is you have to sit facing the sun for two hours.  It isn't AT&T Park, but it's baseball!! 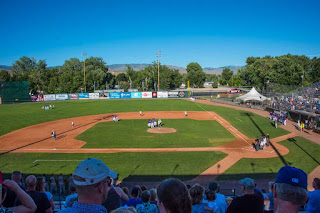 The net screens strung up across the entire baseline made picture taking a little difficult and since the only thing the announcer announced was their names, it was a little hard to follow the game.  We had to be constantly looking at the scoreboard to see what was happening.  The Rockies have just recently changed uniforms, so these purple shirts are all new.  Too bad they didn't change the batting helmets also ... they are the old green color.

I cheered for the Hawks and booed the other team along with the crowd, so my Outlaw family wouldn't disown me. 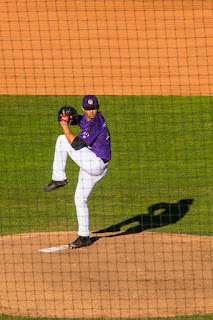 With hawks and falcons so prevalent in this area, and of course light standards being the perfect nest location, the locals helped this baby along by providing a platform.  She flew in during the game and parked on the nest.  A peregrine falcon they said. 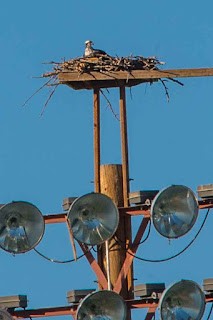 The opposing team was the Salem Volcanos.  Who's ever heard of them??  I decided to check and see what team they were associated with.  HOLY COW!!!  They are the GIANT'S "A" league team.  I switched sides immediately!!  Trouble is, I was the only Giants fan in the entire stadium, which caused a little riff.  I silently rooted for them the rest of the night. 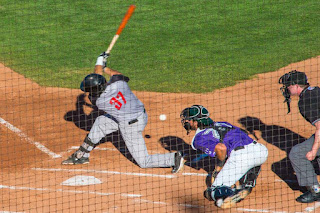 About that time, Dad falcon came along and perched on the second light pole.  It was just a little too far away for my short lens.  He spent a good part of the game preening and cleaning up for Mom. 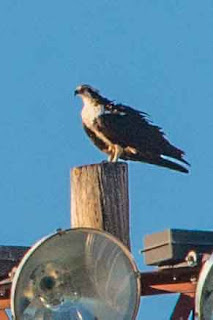 There were lots of bad plays and then there were good ones like this.  The Giants player started his slide a little early ...... 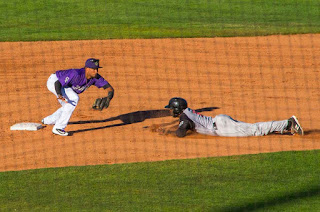 and was definitely OUT.  There were also some pretty BAD calls by the umpires.  A killer shot to center field and the Giants player had a triple, but was called out on his slide to third base.  Even the Hawks fans agreed he was safe.  There's no big screen around here however, so no instant replay or challenges.  By then it was 3-2 Hawks, who held on to win the game.  That's okay since the Giants beat them on their opening day 6-2!!  Series tied ... tonight is the last game for the Giants before moving on. 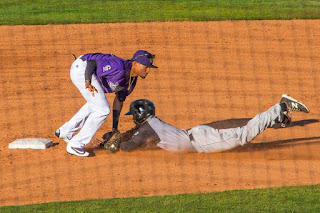 Here's the Hawks mascot, Humphrey, who came up to visit us at the end of the game.  Did you notice it's still light outside??  It was a 7:15 start, the game is over and it's still light.  Daytime lasts MANY hours up here.  It's light at 5 am and STILL light at 10 pm, making for some L-O-N-G days!! 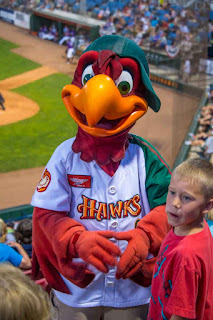 I tried to sleep in, but of course that never works.  Today we're hitting the botanical gardens and a couple of quilt stores.  My fabric-feeling fingers are getting itchy!!