Another early start to a second amazing day of Revolution Team Kite flying.  It's so early there's NO ONE on the highway ... I breezed right along through Astoria and across the bridge, arriving at 8:00 am.  Plenty of time for a parking spot. 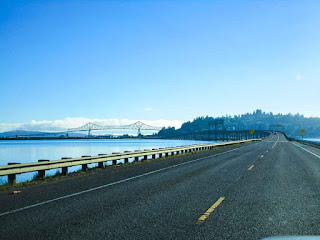 Thankfully, two mothers took videos of us flying, otherwise I'd have nothing to show you.  We were flying almost every minute of the day ... and believe me, it was a WORKOUT!

The winds came up to around 20 mph according to my weather app, whipping sand everywhere.  Being a bunch of diehards, we flew regardless!!

That's John on the right, I'm second, and from there I have no idea.  I snipped this image from a video posted online, so it's not too clear.  I do know the far left is the 8 years old.  MAN that kid can fly!!

This is threading the needle??  Forgive me, I don't remember all the names of what we did.  My head was stuffed so full of information on how to get my kite to do what I wanted, there was no room left for names of any kind!!  At any rate, odd numbers went up, then as they came down, even numbers went up through the holes.   I think we managed this three times in a row!! 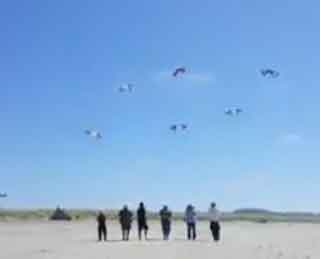 Double arch ... I do remember this one.  Same as above, John on the far right, top arch, me second from the right top arch.  From here, we would all burst OUT of the arch trying to keep our same positions, then fly backwards to this position, repeat, then to a straight line, then land together. 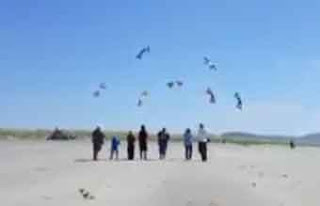 With so much wind, no matter how much I adjusted my lines, every time we went UP, it drug me a few feet forward.  My arms now feel like they are going to fall off.  On my right is Mark who has been flying for many years and knows all the routines.  He helped me out a lot!! 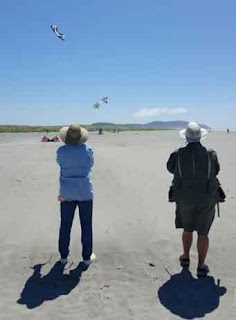 This is John and Mark flying a dog stake.  They wrap their lines around a stake and fly the kite over their heads.  There's no way I'm trying THAT!! 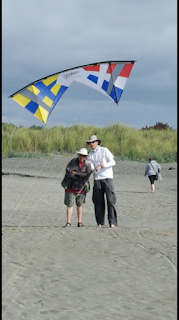 Just look at these poor kids trying to hang on!  That was me .... I should have some really great shoulder and back muscles now!!  We did more boxes and triangles, before finally trying the figure eight.  Here's how this works ... or at least SHOULD work.  Sorry I don't have pictures of this, but you would only have seen a big jumble of twisted kites!!

Everyone goes up ... John starts by making a right hand turn, flying down, then around and up to the top left.  I follow ... sort of ... winding my line under everyone else.  Each one follows, making a tangled mess in the middle.  John now turns left, flies down and around, ending up in his first position with me and everyone else following.  As you can imagine, that didn't work so well the first eight times we tried it!!  Mostly because two of us had never even done that maneuver before by ourselves!!  Finally, on the last try,  I got it right and came out unscathed.  The last four crashed and burned, so we went on to easier things. 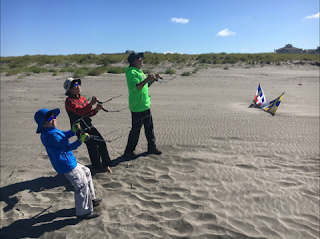 If you've never tried flying this type of kite and are up for a little challenge, you should give it a shot. It's great exercise, not to mention being on the beach all day.  My advice is to take a chair with you, because you're going to love it and won't want to leave.  Trust me, after a couple of hours, you're going to want to sit!!

I can't thank Joanna enough for letting me know about this clinic.  It was the most fun I've had in ages, even with all the sand I swallowed, my burned feet and sore shoulders.  To make it even better, I asked John to show me Joanna's secret to her magic fingers AND HE DID!!  Not that I can do it, but maybe with another 100 hours of practice!! 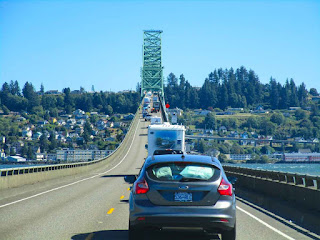 I drove home with my head in the clouds.  I even had extra time to contemplate all my new knowledge as the bridge was backed up for two miles on each side.  Seems a truck conked out right in the middle of the UP section.  I spent 30 minutes on that bridge, hoping THE BIG ONE didn't hit and throw me in the water!!

I slept pretty good, but this morning noticed my arms almost reach the floor.  If I need anything on the top shelf today, I won't need a step stool.  I'm thinking aspirin and the couch should fix me up just fine!!