I think that was the number the nice guy on my weather radio spouted out when it went off four times last night.  The storms just keep coming.  If only we could get some of this rain to California!!

Yesterday started off nice enough ... I hit the laundry with everything I could carry to try and wash away the buggy problem.  Although my GPS is new, it pays to call ahead to your destination to make sure it's still in business.  The first laundromat was packed with people waiting in line, which should have been a red flag.  The next TWO I drove to were out of business, one being a "cleaners", not a laundromat.  The third one in Grain Valley fit the bill, except the owner questioned everything I put in the washer.  He thought I should make three loads out of one!!  When I refused, he said okay ... he was getting pretty good at repairing what people broke.  Hmmm what happened to that Missouri hospitality??

That done, it was on to the grocery store.  I thought homemade ice cream would be in order for July 4th, so I picked up a $25 plastic model at Target.  One of Barbara's favorites is Cinnamon Ice Cream, so I set about making a test run custard ... which was when I discovered all I had was Saigon Cinnamon.  It has a little different flavor.  No matter, throw it in and see what happens.  I put the entire thing in a large plastic bucket so it could be made inside the rig ... it's equal to 99 degrees outside with 98% humidity.  With Tom's help (telling me to put the lid on first) we hauled it over to their rig for processing.  Boy is that a noisy operation!!  Locked in their bedroom, it soon slowed down and stopped entirely.  It was Ice Cream Time!!!  Smooth, creamy ... maybe a little TOO creamy ... deliciousness!!

Just as I wandered back to my house, the big storm got close enough to see lighting.  I'm not talking a strike here or there ... I'm talking five strikes at once that light up the sky constantly.  You can see how bad it is ... this very grainy picture was taken with my i-Phone!!  I thought about getting my real camera and standing outside holding it up towards the sky ... but common sense kicked in and told me to put the camera down!! 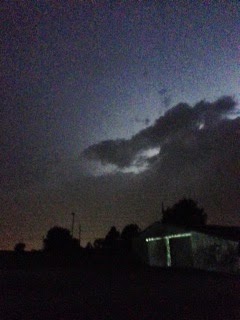 When the weather announcer on local television said the storm was heading exactly our way, I was in the Westerfield rig in a flash!!  It's hard to decide what to do ... the storms that come through are never as bad as they predict ... so I understand why people around here pay no attention.  The 60 mph winds just over the hill however, convinced us to pull our slides in ... which broke one of my small cabinet doors that was open (I know Tom's a master cabinet maker, so I'm hoping he might be able to fix it) ... and the interference was so bad my television reception went out completely.  Braced for whatever the Weather Gods had in store for us, the dogs and I sat on the couch in anticipation of the worst storm yet.  It never happened.   There was some rain, some small hail, NO tornado and very little wind.  The only result of all that is my rig is now listing to the North and I have two more bug bites!!

I'm not about to tempt the fate of the Gods, so I'll still keep a weather eye on the horizon, hoping that since I've decided to relax, we don't get hit with the BIG ONE!!!  We'll be on the road to St. Louis as soon as another part comes in for Tom's awning.  If we wait long enough, the Elks are having a pulled pork barbecue!!  :-)
Posted by Nancy Kissack at 5:31 AM