By 9:00 I was off to the post office to pick up a package with camera cleaner, and discovered that the people parked at the Elks Lodge had left early.  Since a family of 7 with 3 under 3 years of age just moved in to my backyard, I quickly packed up and moved back to the best RV space in town!! 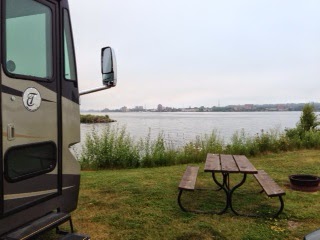 The weather has cooled considerably, so instead of the boat trip up the windy river, we stopped in at the Old Courthouse for some pics.  What a beauty!!!  I'm just crazy about the 1800's architecture!!  An added surprise ... when I checked for a geocache, there was one located close by which we promptly found!!  That makes 60 for me!! 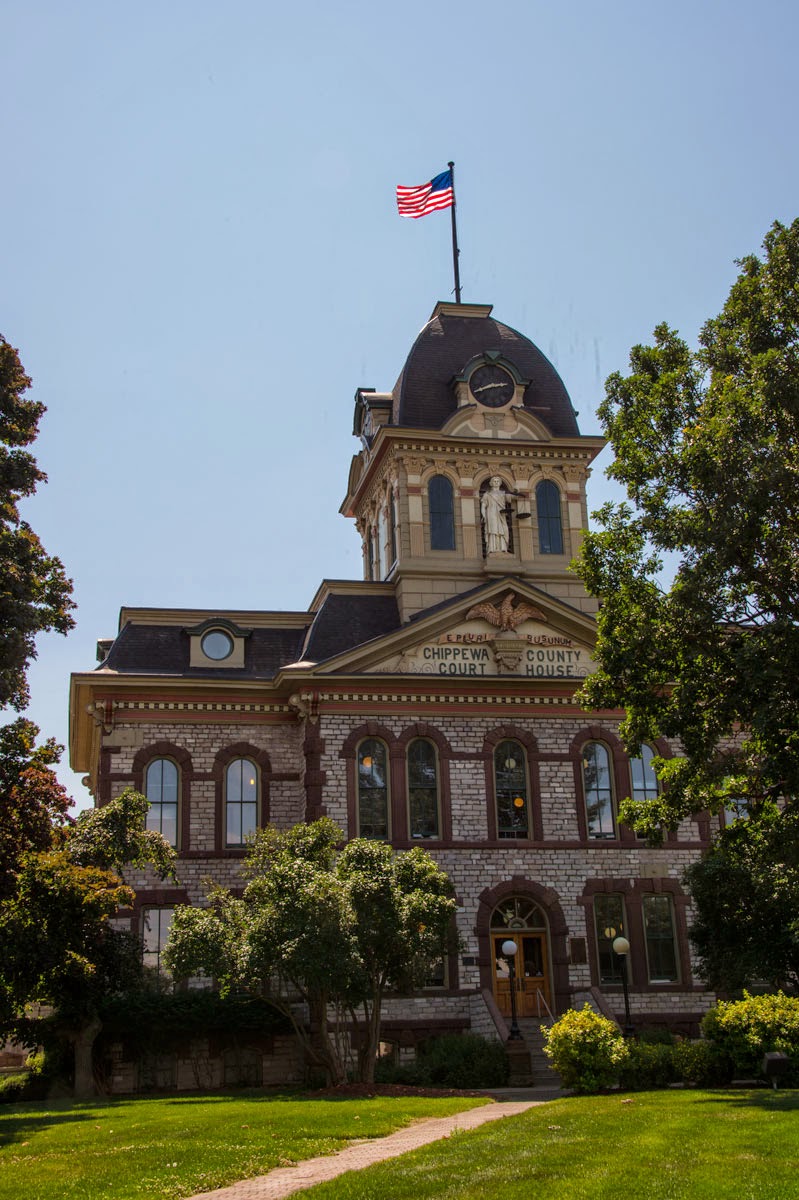 This statue was near the Courthouse with a very interesting story.  This is the Crane of the Sault.  The story goes that two boys ran away from their horrible mother.  When they met the crane and told their story, he flew them to the other side.  When the mother came along looking for them, the crane said he would fly HER to the other side also ... except halfway across he dropped her in the river, smashing her brains all over the rocks ... which became the whitefish in the river.  Comforting story .... but that's exactly what the plaque said!! 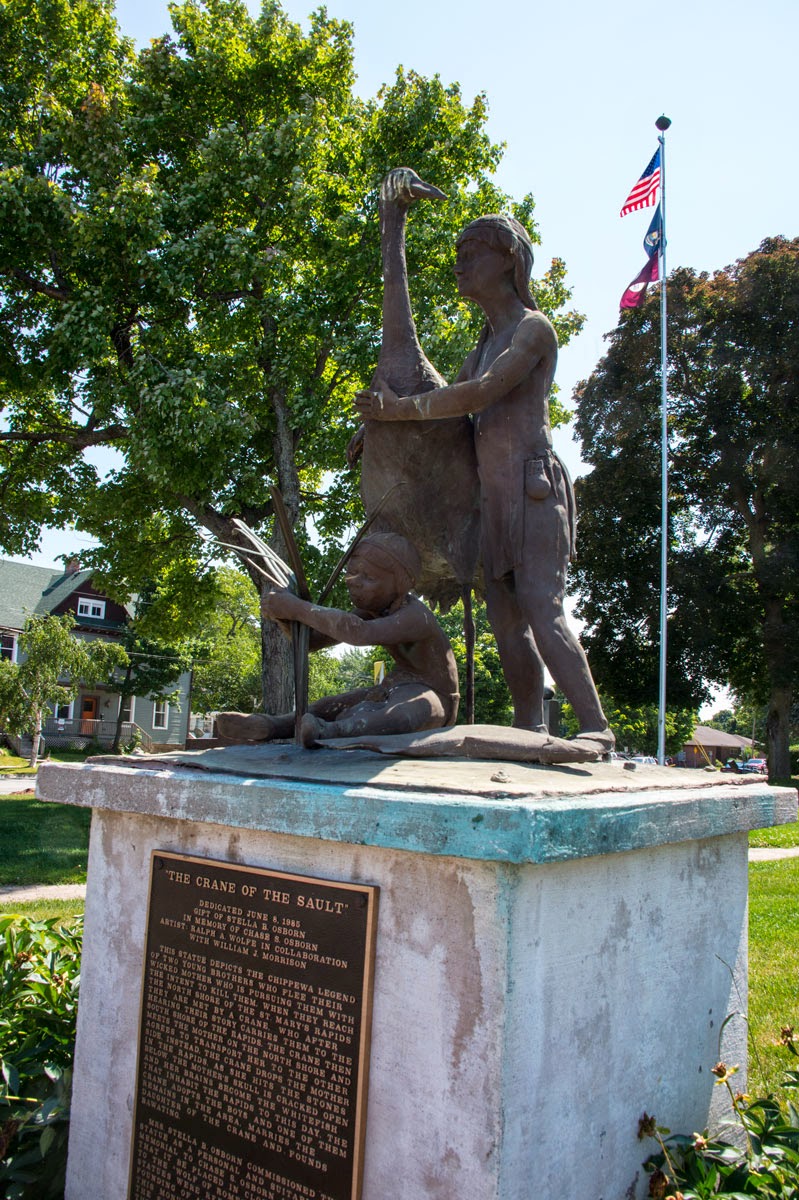 From the Courthouse we went to the Kewadin Indian Casino for a players card loaded with $10 (for free) that we could play.  It's not much from the outside, but the inside is very nice with walls of Indian artwork.  Once loaded up with our $10, we headed to the penny machines.  I haven't played any slot machines in years and have no idea which buttons to push.  By the time I figured it out, I was broke, as was Tom.  Barbara left with a little over $3.00 to pay for almost half her dinner, which we ate in the restaurant buffet. 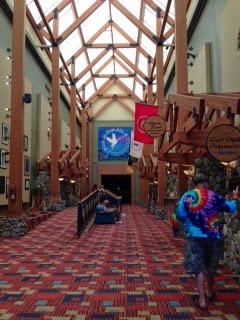 On a quick trip through the gift shop, we all scored Mackinac Island Fudge, so at least we didn't go home empty handed!! 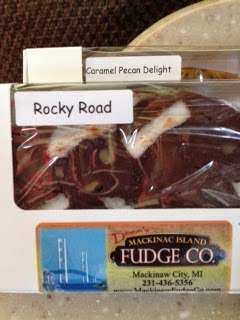 Back at the rig with my view again exquisite, I watched with the puppies as the Lakers passed by.  It's pretty windy and a chilly 60 degrees, dropping down to 49 at night ... time to dig out the heater!! 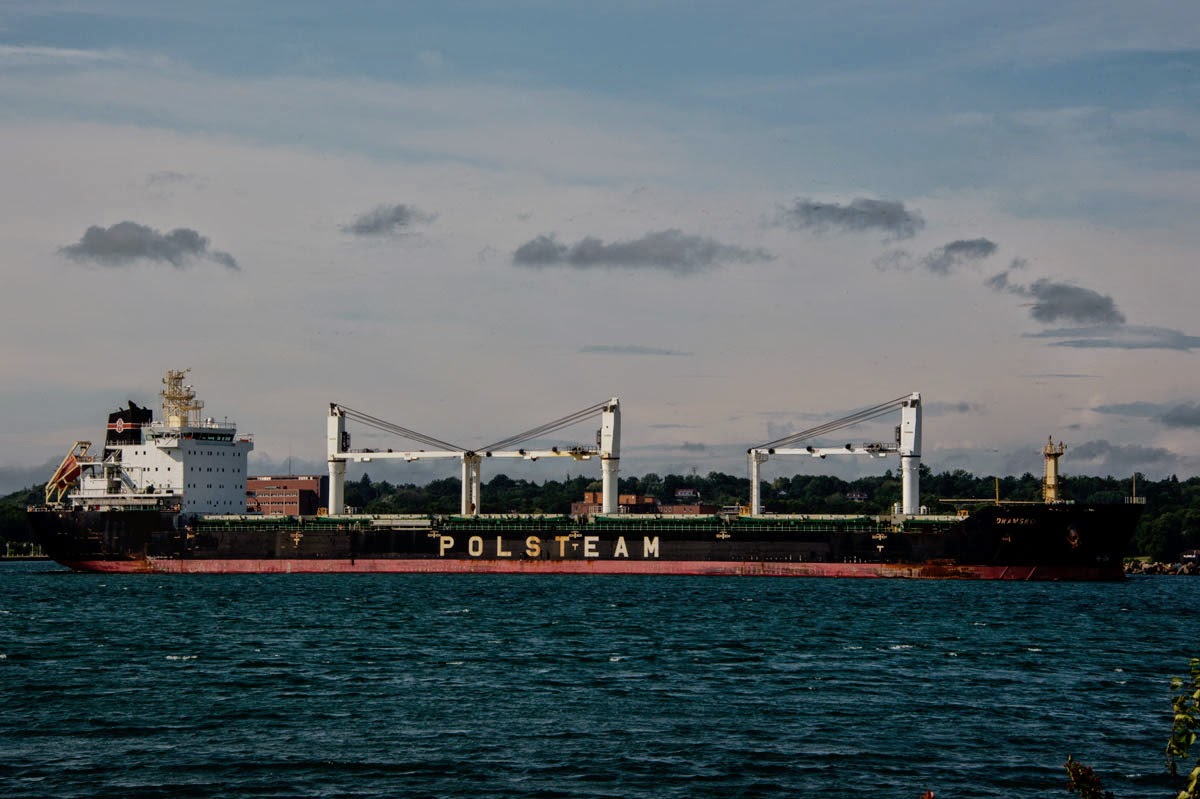 As it got dark, I got the itch to shoot some of my favorite kind of photography ... long exposure night images.  The trouble around here is that it doesn't get dark until 10:00 pm and I was shaking in my moccasins from the cold wind coming off the water, as was the camera!!  That small vibration is disastrous in photography, making almost every image blurry!!  Finally, with a 45 second exposure, I was able to capture the beauty of the river!! 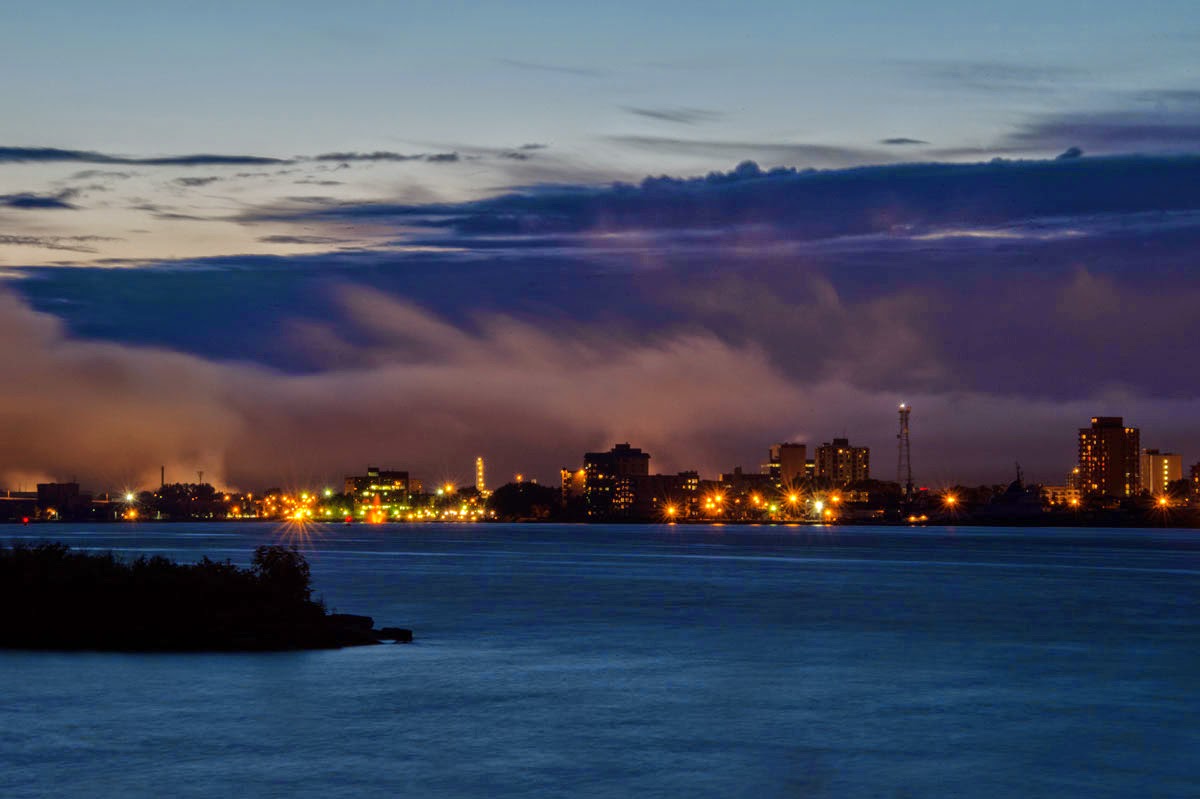 For those interested in statistics ... here's a couple about this trip.  Travel from California to the Great Lakes has taken three months, spending lots of "tourist" time (but could have spent more) has cost $1,715 in RV Park fees (no dry camping), and I have driven approximately 3,750 miles using $1,295 of fuel.  Don't ask how much yarn I've purchased ... I threw those tags away ... nor have I kept track of food.  We eat breakfast in and usually have a late lunch/dinner out.  All in all, I think our expenses have been very reasonable!!!  So come on!!!  Don't just go to the same park year after year ... get out and see some of this beautiful country of ours!!!