But I Don't WANT To Be An Electrician!!!

As much as I was dreading the next part of the electrical service drama, it was time to put on my "man" pants, suck it up and get the job done!!  Anything electrical scares me ... sometimes I even have a hard time flipping the breaker switch when it's 50 amp.  As a kid, I was zinged on my neck by a hotwire horse fence across the top of a gate that fell over on me.  I can still feel that terrible paralyzing sensation to this day!!

I called Progressive Industries and was directed to Donald, who gave me specific instructions on how to remove the old module and install the new.  Okie dokie ... here we go!!  I unplugged the main power cord and turned off everything I could think of, including the inverter and the 12 volt system.  Removing the cover was the easy part!! 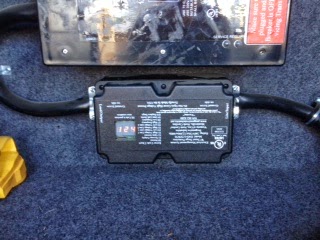 Donald suggested I take pictures of everything so I could replace it all exactly the same way.  Here's the display panel that gives me all the readings with some very large terrifying wires directly behind!!  This easily pulls out to reveal the problem board ... in fact, it is plugged IN to the problem board!! 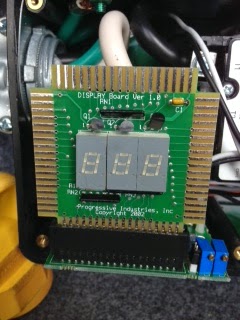 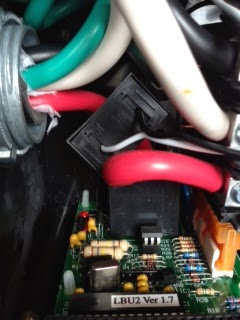 See those two little white pins sticking up on the left side??  They are about 3/8 of an inch tall with a tiny little piece of something in the middle that won't let me raise the board up, not to mention the big black box piece sitting between the two red wires.  Into this mess must go two screwdrivers and a pair of needlenose pliers.  After two more phone calls to Donald and much cursing, I was able to lift it up on three out of four pins.  Hey ... just get a bigger screwdriver, right? ... which finally, with lots of prying and a little more cursing, released the board.  Trouble was, I knew the new one wasn't going to go back in any easier!! In fact, it was going to be much more difficult NOT to damage the new module.

About this time, Barbara and Tom came back from town, and Barbara helped me push, shove, pry, moan and groan until she was able to get it on 3 of 4 pins while I pried stuff out of the way.   That last pin??  It was a stinker, to say the least.  Finally, with my nose 5 inches away, a flashlight so I could see better and a gripping pair of needlenose pliers, it snapped into place.  EUREKA!!!!!!!  I didn't have the nerve to plug the rig in and hit the breaker, so Barbara did it for me.  ERROR ERROR ERROR ... Oh no ... Open Ground.  Really?  How did I do that??  Flip the breaker off  ...  QUICK!!

Another call to Donald and he explained in detail what that was, as Tom got his meter out for me to check all the wires, which you have to do AFTER you turn the power back on.  As Barbara again flipped the breaker switch, it started to read everything normally and there were NO error codes!!!  I THINK WE GOT IT!!!!

What a major relief it was to go inside and have everything work without hearing the breaker snap off.  I kept listening, believe me, because I just wasn't sure I hadn't damaged the NEW module during installation.  Everything just kept humming along, and as nervous as I was about leaving the rig, we headed out for dinner.  As I think back, a really HUGE marguerita would have been better, but half a slab of baby back ribs from Hickory River Smokehouse was mighty tasty ... and I have leftovers for breakfast!! 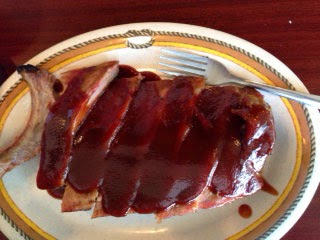 As of now, the Progressive Electrical Management System is working like a charm.  I run out and check it often, just to be sure!!  I will mail the old module back to them so I have a zero balance on my account.  Not only did they send me this part by priority mail less than a day after I reported the problem, but they patiently took all my crazy phone calls where I offered to buy their plane ticket to come fix this thing!!  That's pretty good service I think!!  If YOURS fails, I can tell you exactly how to replace it, but I don't think my body can take another stressful two hours of thinking I'm going to get electrocuted, so you'll have to do it yourself, because really ... I don't WANT to be an electrician after all!!