What Happened Where You Are Camping??

Do you know what happened in the town you're staying in??  Why was it settled in the first place? Who was the very first to tread foot on the land you are camping on?  Or do you just scream into town, park for the night, leave at the break of dawn driving for 10 hours, only to park in the dark!!

That doesn't sound much like fun to me, but I understand if history isn't your thing.  Every place we spend the night, I get on the internet and read all I can about the area, including what it was known for way back when ... and what it may (or may not) be known for now.  It makes your travels MUCH more interesting!!  Such was the case in Janesville Wisconsin.

This town of Rock County, with the Rock River close by, was settled by William Tallman, a lawyer from the East who purchased almost 4500 acres.  In order to keep an eye on his holdings, he built this amazingly modern home in 1870. 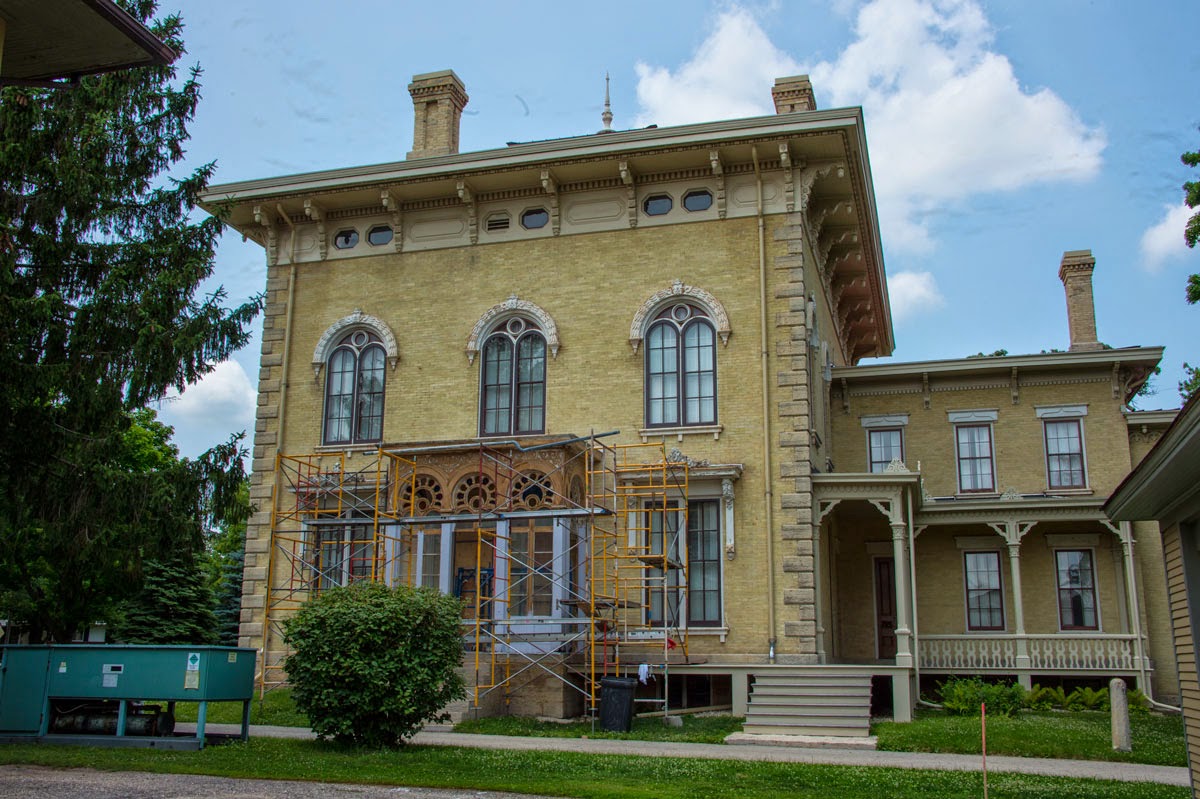 Before we toured the house, we spent some time at the Saturday Farmers Market gathering up more groceries.  The Asian influence is definitely here with lots of goodies from the short growing season.  There were also vendors with wood carving projects, critters made of glass, olive oil and items made and sold by the local nuns. 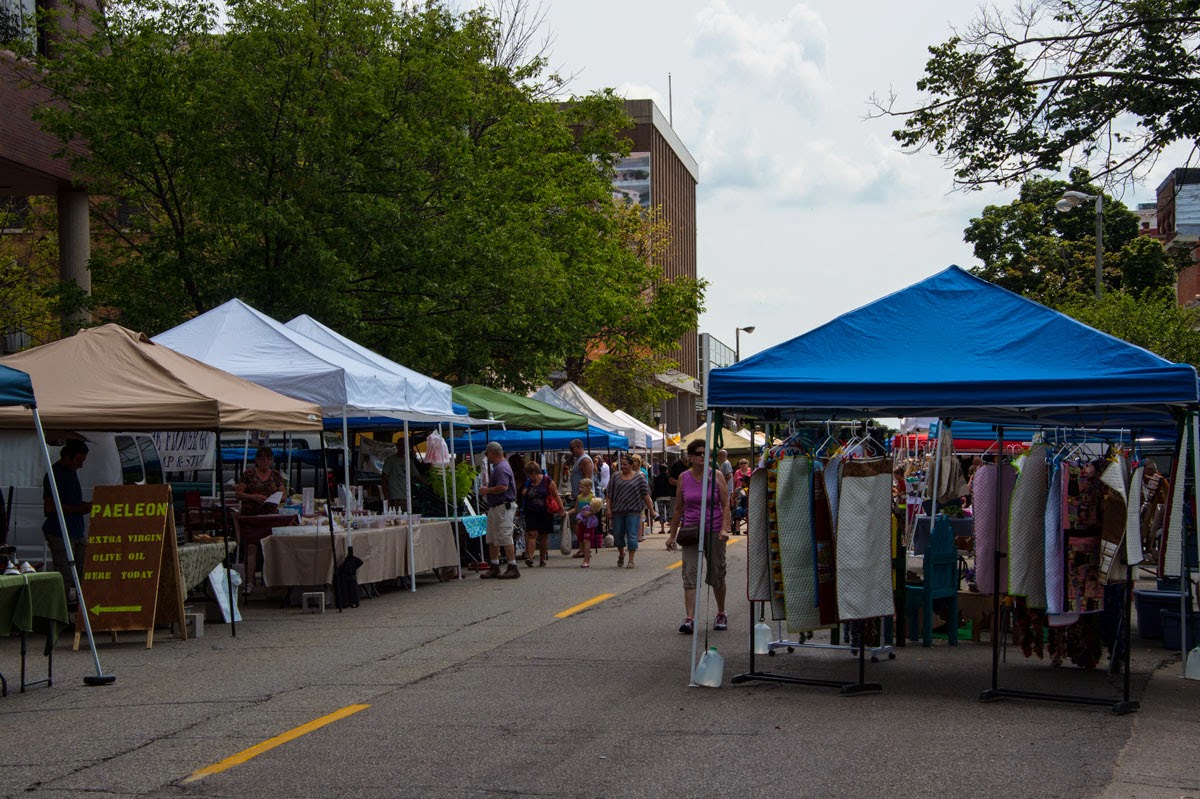 Have you ever heard of ground cherries?  Pretty yummy ... you peel them and eat the little green grape-like fruit inside.  Kind of sweet, they taste a little different to everyone. 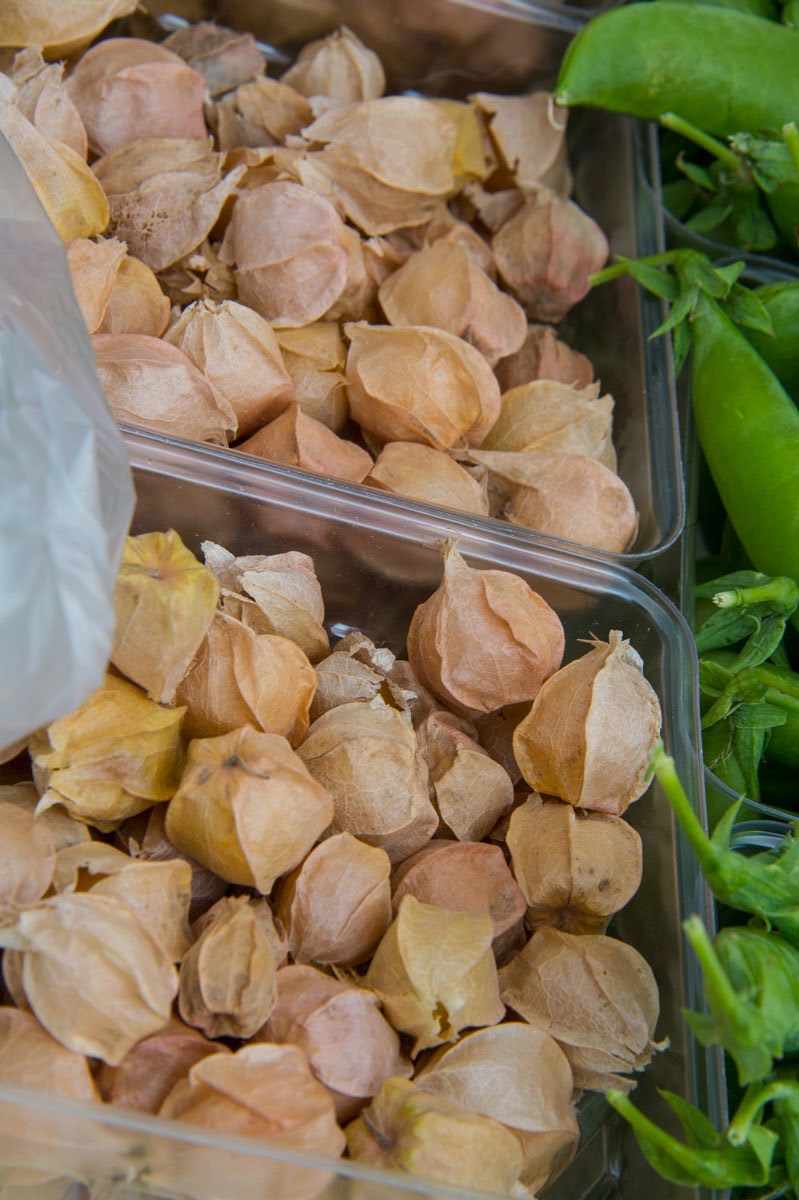 From there, we stopped by the Lincoln Tallman house.  It is the ONLY house still standing where Lincoln spent the night in Wisconsin ... maybe even the only house period!!  Mr. Tallman was an abolitionist, and when he heard Lincoln's speech in Beloit, he invited him to come speak in Janesville, which he did.  What a house Lincoln walked through ... MUCH more elegant than his own, for sure.  As you walk in, there was a huge hallway from front to back, with large double doors on each side ... one to the "company" living room and one to the "family" room.  It had central heat from a wood fired heater in the basement, gas piping to the lights, running water, walk-in closets and an indoor privy built so rain water came down the back washing everything through the pipes to the river below.  They weren't concerned about contaminating the water back then!! 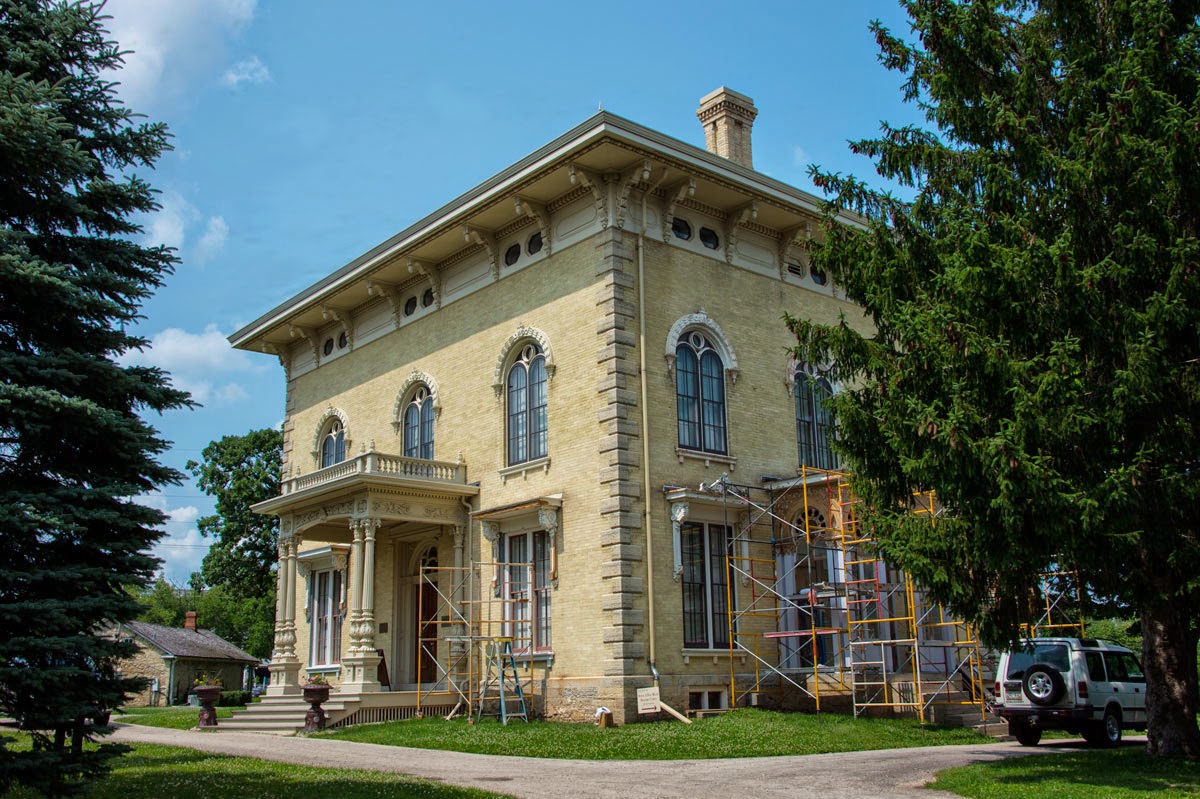 This is the Rock River ... the same one Mr. Tallman used for his sewer!!  Funny, it smelled a lot like algae when we walked by towards the Farmers Market. 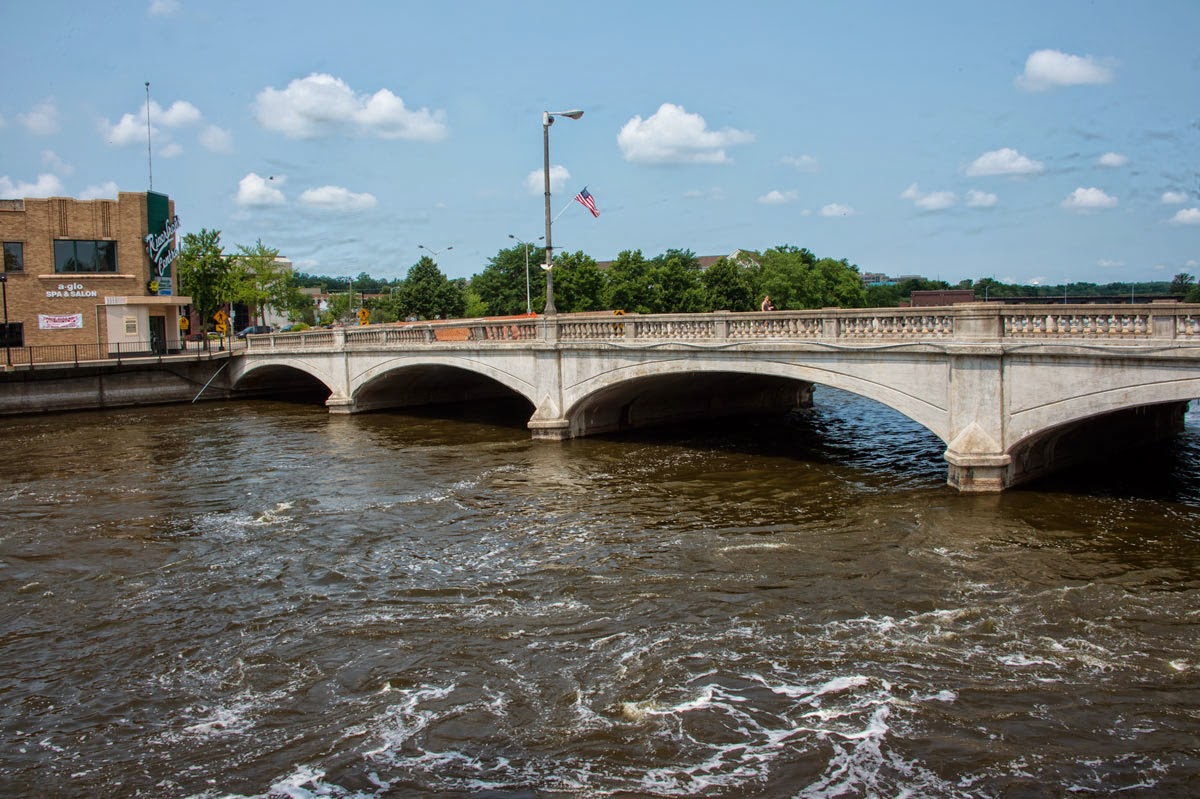 As I snapped this image, I was told AGAIN no pictures.  Gee ... you're putting a crimp in my style!!!  Every room in the house had moldings like those seen here, reinforced with horsehair allowing them to withstand the passage of time.  The Tallmans moved out in the 1915's and it remained vacant until 1950 when donated to the Historical Society.  You HAVE to see this house ... it is truly amazing. 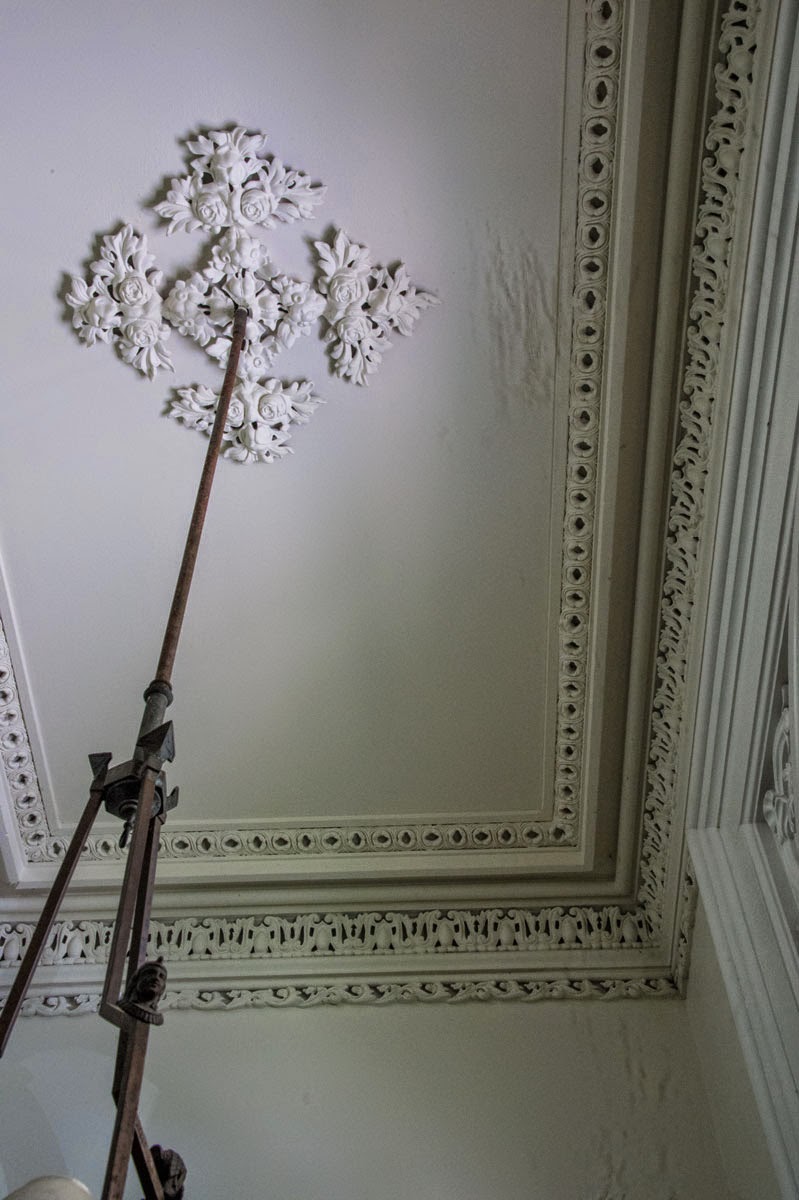 As I was saying Mr. Tallman was an abolitionist, and it is believed he was part of the underground railroad.  When the house was abandoned, local kids still living, attested to the fact that they went from the river, through the tunnel to play in the house, but it cannot be found ... as yet.  To the right of the two second floor windows is what looks like a brown door.  It is actually a window that looks normal from the outside ... but on the inside the glass panes are covered with colored panels.  A light in one pane means don't come in ... a light in a different colored pane means it's safe. 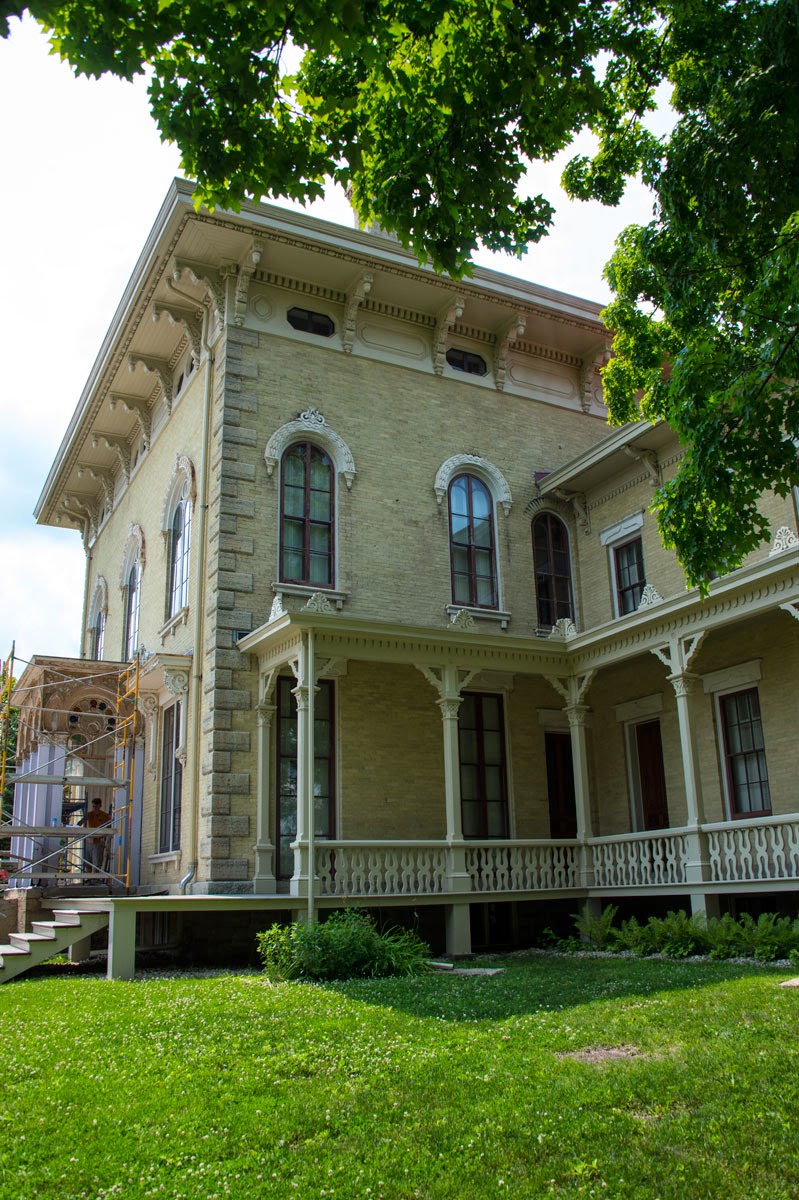 They aren't sure if the slaves would then stay in the basement, which actually had several rooms ... one for laundry, one for food storage, one for the kitchen ... or in the attic, looking out the the windows seen under the eaves ... or even possibly in the cupola. 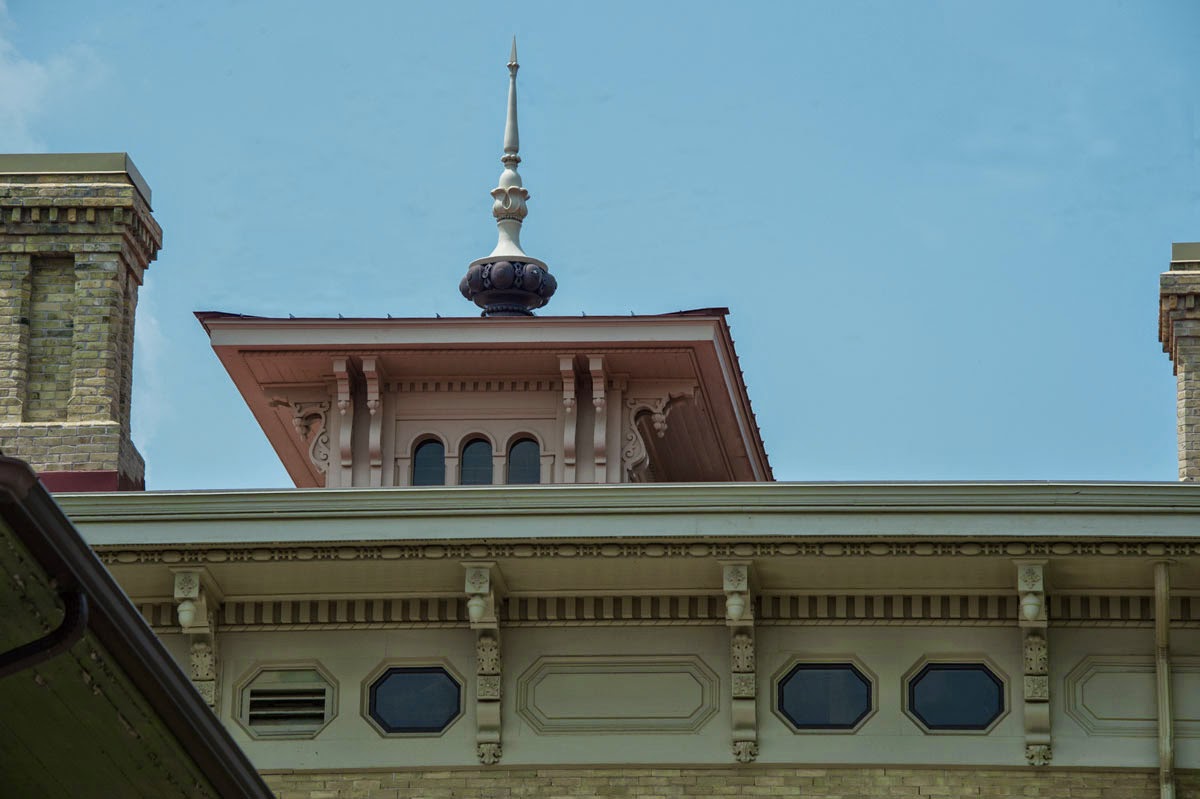 Of course if you are wealthy you also have a carriage house for your wagons and horses, just behind the big 20 room house.  The "Lincoln" story was that in getting ready to leave the next day, he left his boots in his room, which were picked up for cleaning by the servants.  They left the boots in the boot room like they did for the family.  When Lincoln awoke, he had no boots, and would have been terribly embarrassed to walk about the home in his sock feet.  So he stayed in his room until they came looking for him.  That made him late for his train ... so he stayed another night. 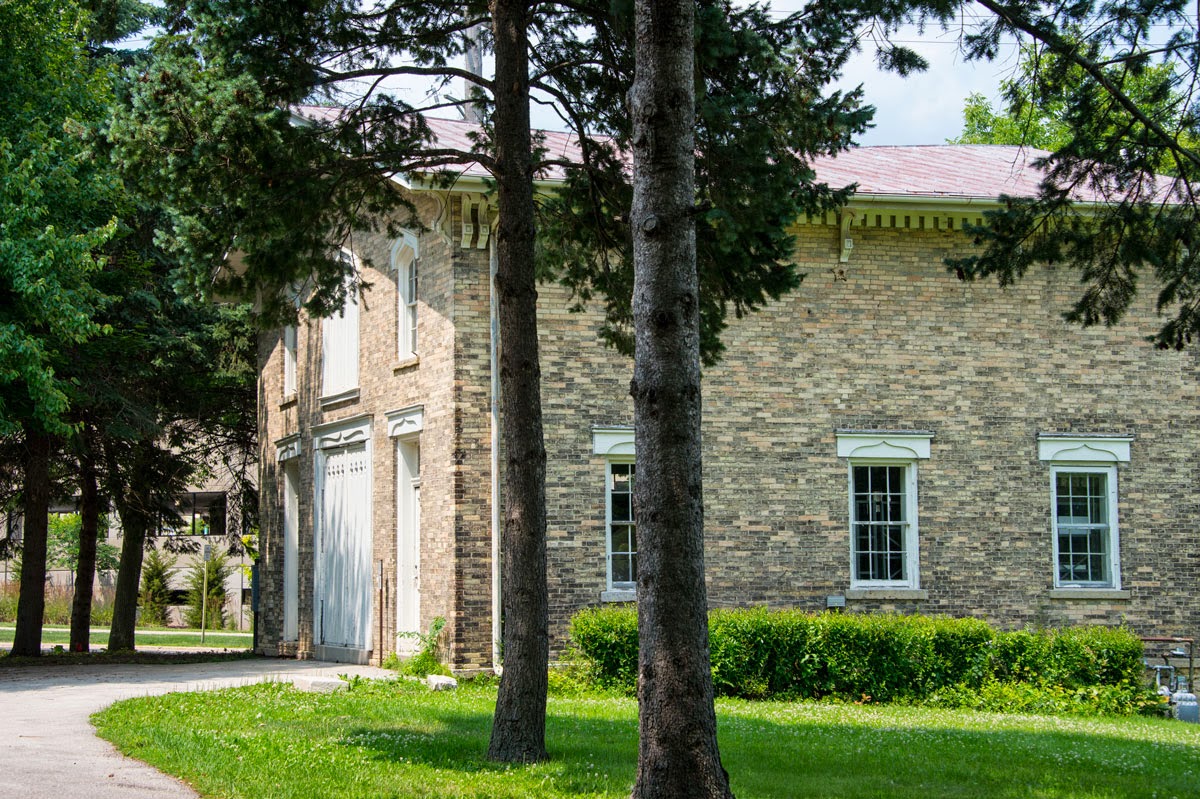 Two of the children of Mr. Tallman built homes right next door, which the Historical Society also owns.  In one .. totally modernized (what a shame) is a collection of Pauline Pottery.  Pauline Jacobus was an accomplished china painter.  When she heard there was good white clay in Edgerton, just a few miles away, she moved here and made these beautiful examples of china around 1888 which were sold at Tiffany's in New York.  With a huge contract for ceramic cups with Bell Telephone Company in hand, the advent of dry cell batteries forced her into bankruptcy in 1894. 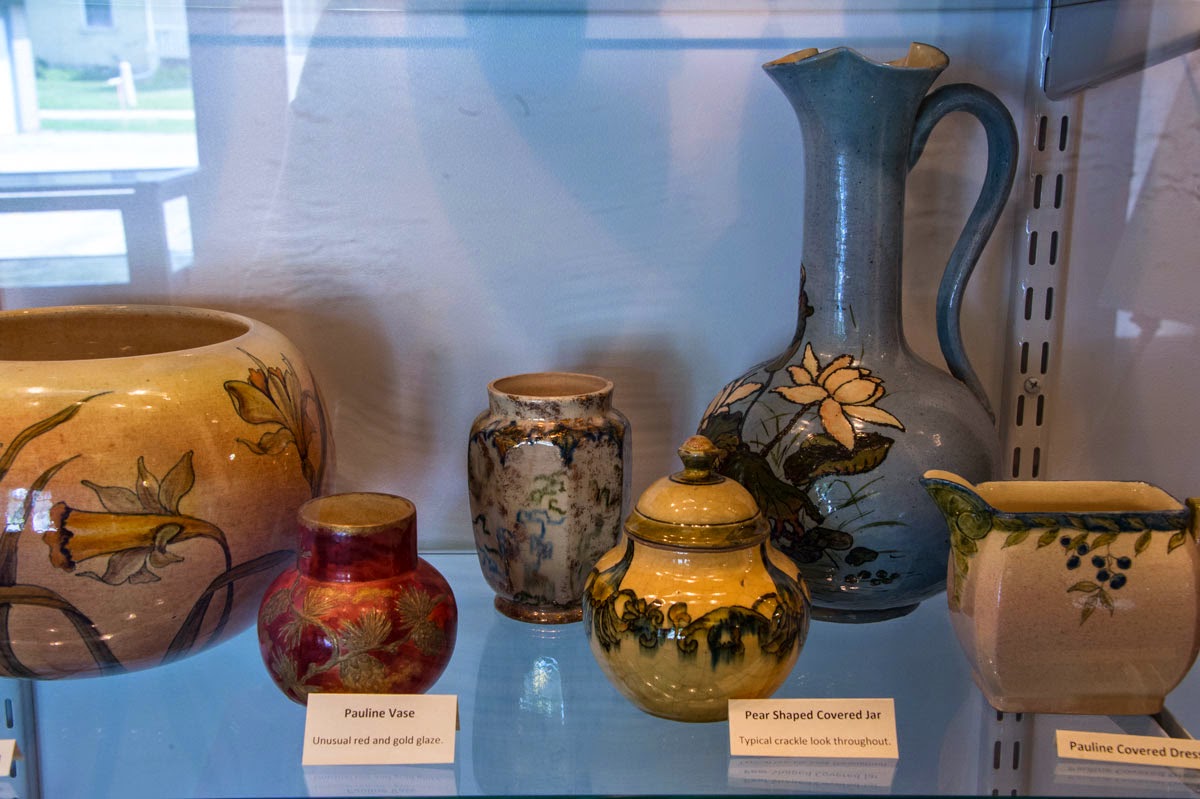 One of her painters, Mr. Pickard, went on to make Pickard China, hiring painters from Europe to create these fabulous works of art.  You may even have a piece of this history. 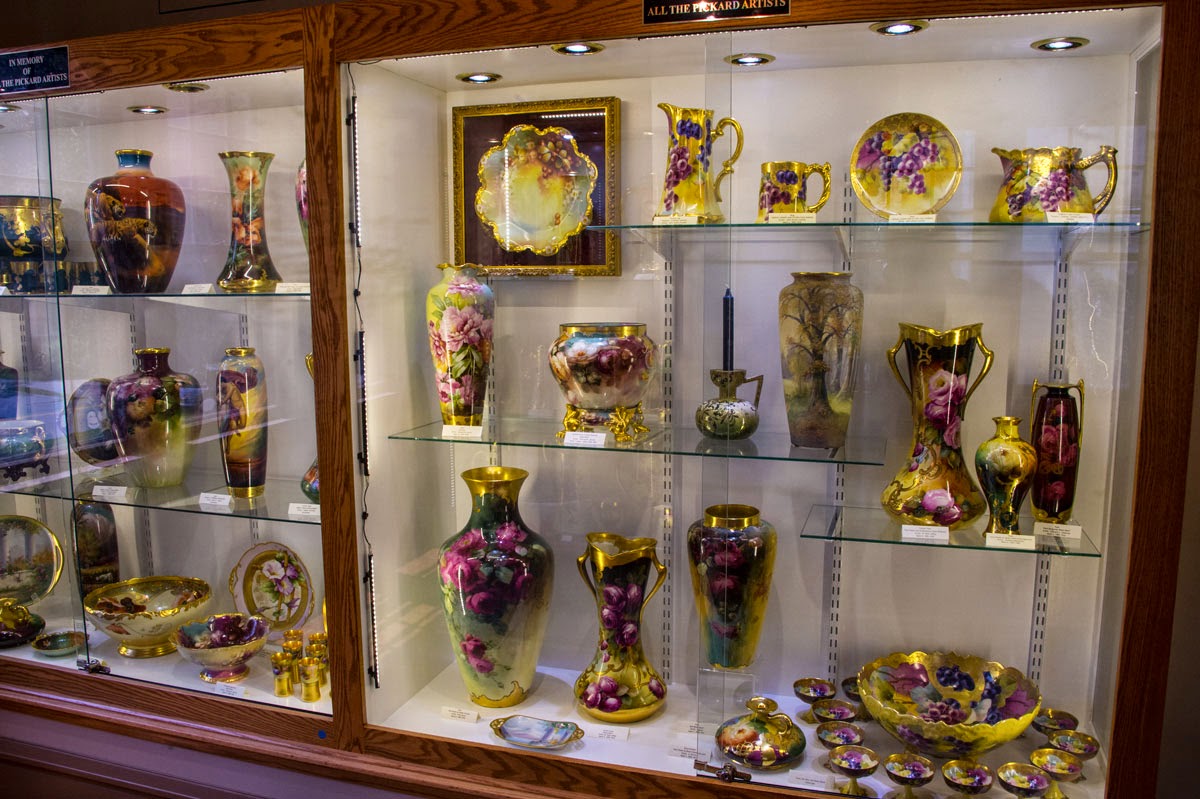 Janesville is also the home of Parker Pens ... this small sample being shown by the Historical Society also.  See what you can learn about a town if you just take a little time??? 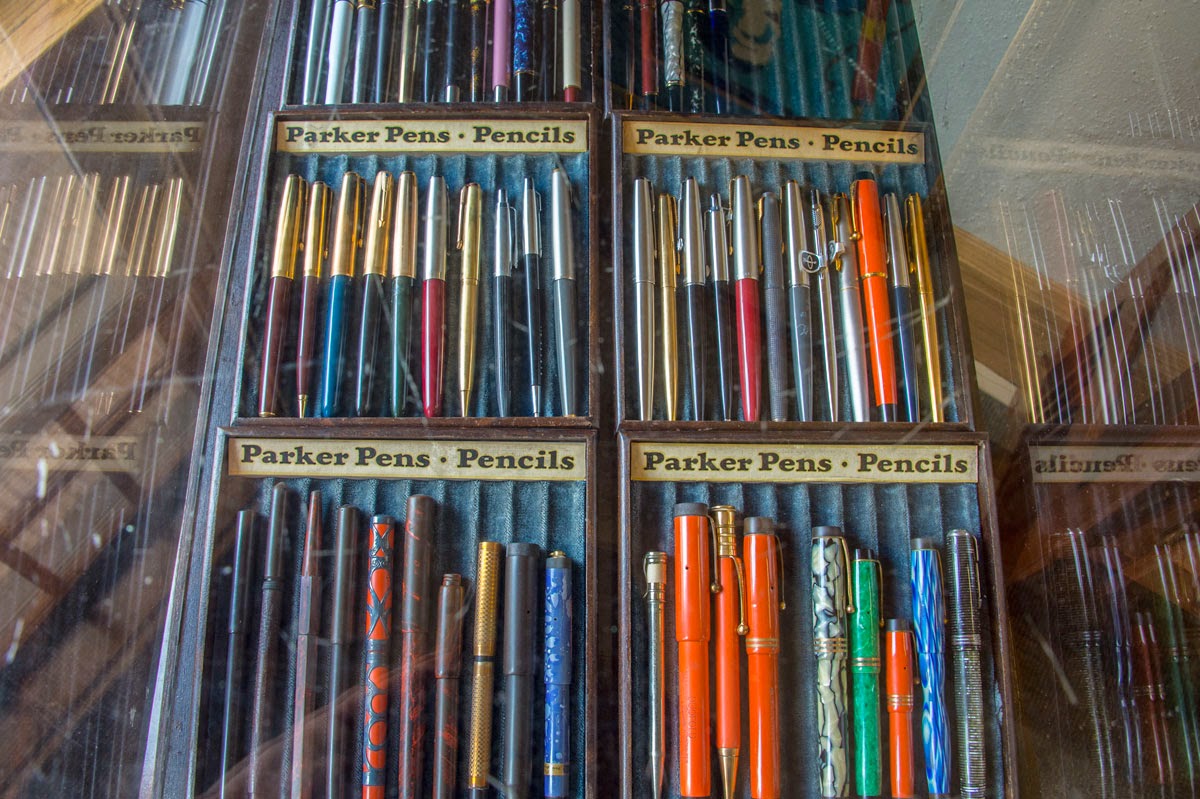 This area had many large manufacturing plants in it's time, most of which have gone out of business, including the big General Motors plant that made Suburbans.  The plant still has a maintenance crew keeping up everything but the parking lot ... maybe it will return to it's glory days making something else!!

Yesterday I passed the day knitting a new easier pattern and playing with the puppies.  This morning we will check out the Parker Pen exhibit before heading North once more towards Green Bay!!
Posted by Nancy Kissack at 6:10 AM