You just never know what the weather will be this far north!!  One minute it looks like this, the next it's pouring rain and hail!!  Friday night when we arrived, ships were passing by right and left.  Since they are headed for the Soo Locks, that's where we went after dinner. 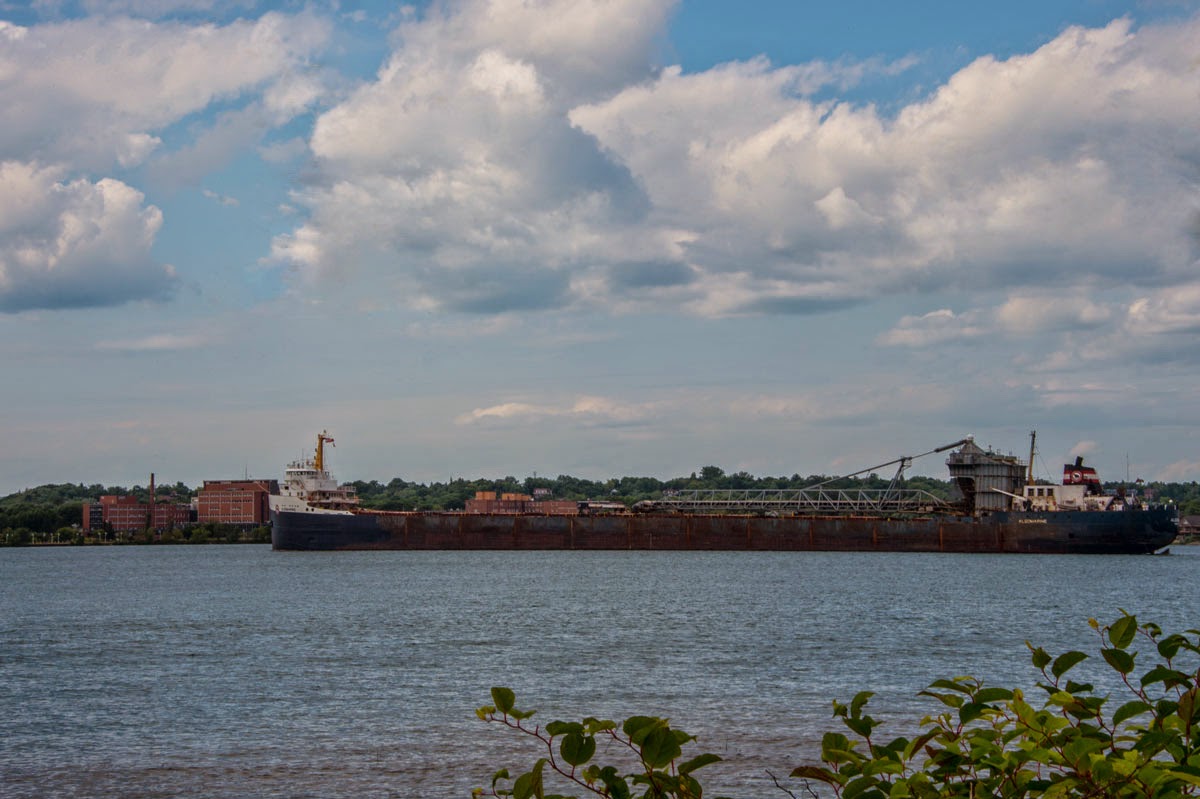 In the distance behind the cranes is the bridge connecting Canada to the U.S.  This is the one you don't want to cross without a passport!!  The lock below us here is the MacArthur, with the Poe Lock next door.  All the ships scheduled for today had passed through before we arrived, with one due at 10:15 pm.  We passed on that one ... I'm sure there will be plenty more!! 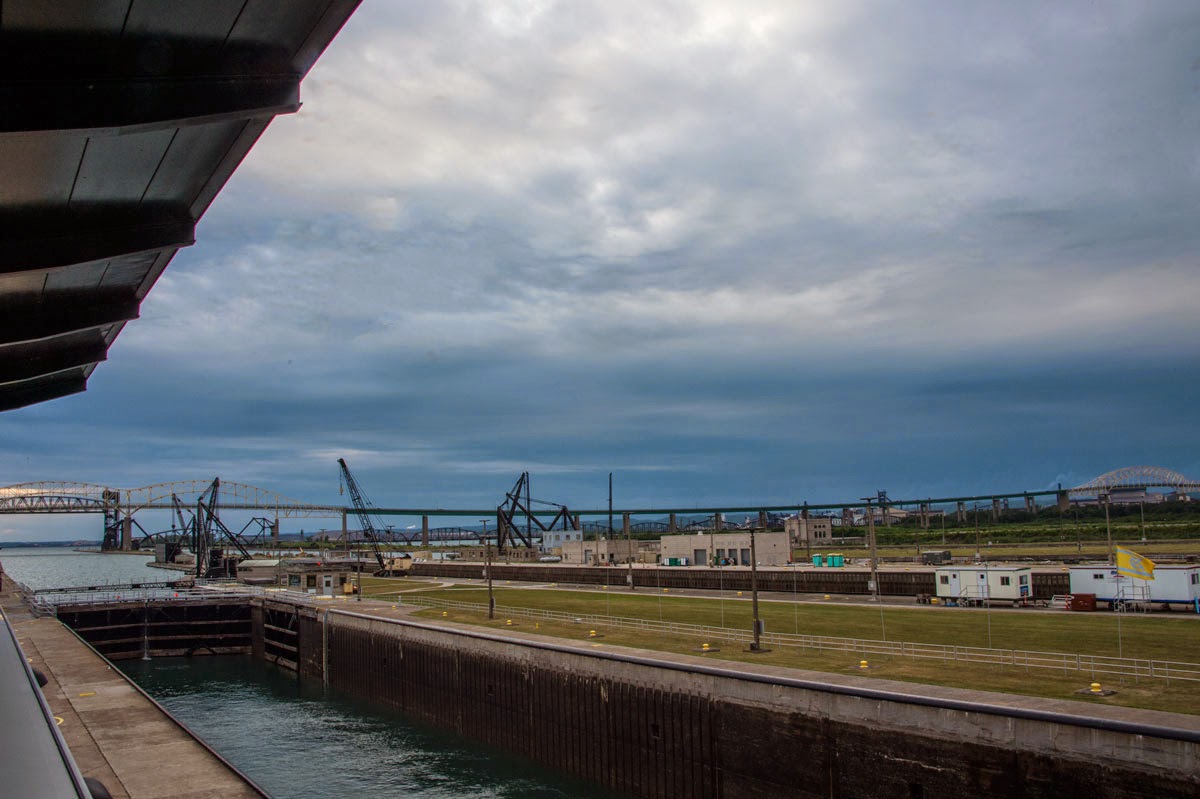 As we looked down into the lock however, this tour boat was just leaving.  They dock just south of where we are parked, and we plan on taking their tour soon.  Wow ... this just doesn't look wide enough for the huge Lakers we've seen gliding up the river.  Up or down, they must all pass through these locks or the Canadian Lock on the opposite side of the river. 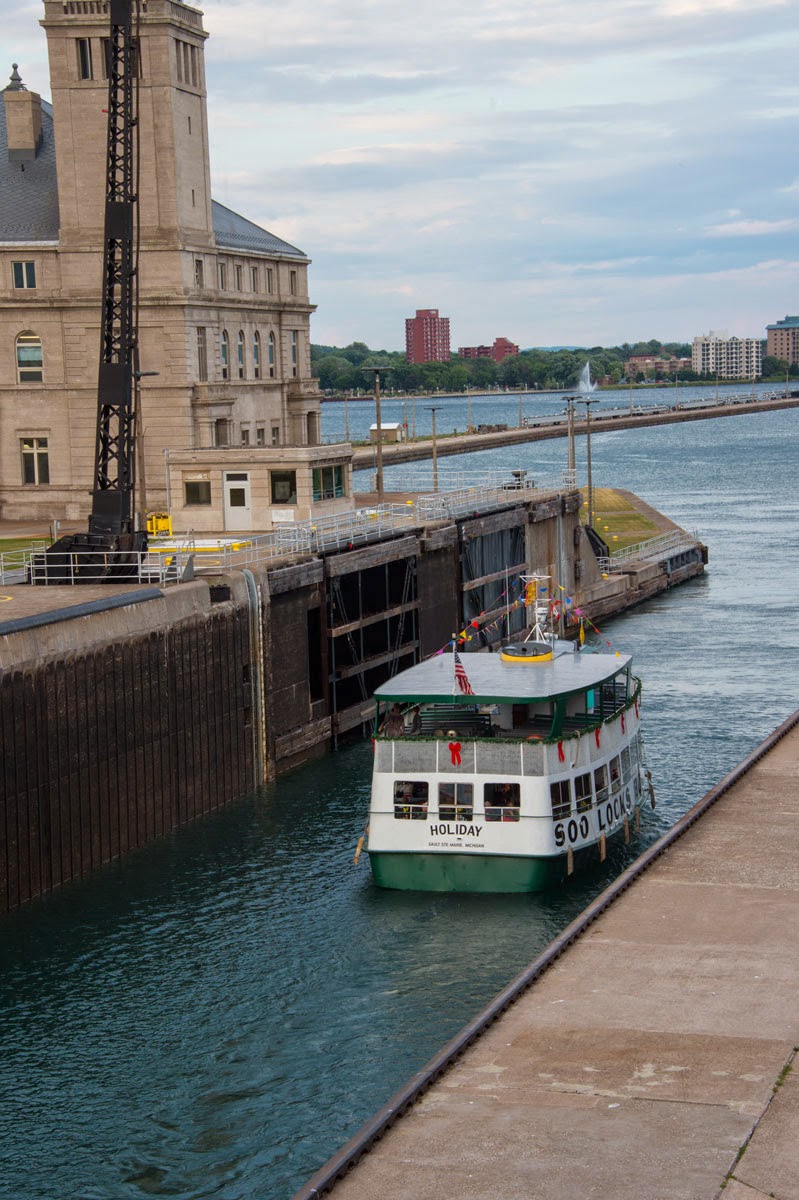 A better shot of the water level drop, these locks don't hold back ALL the water ... maybe half of the river is diverted to a canal located to the west where it runs through an electrical generator plant.  If you're interested in seeing where the ships hail from, there is an app (of course) called Marine Traffic.  It will show you any waterway and what vessels are passing through, even private boats.  All the info about the ships is also available, including what she hauls, her draught, the year built and much more. 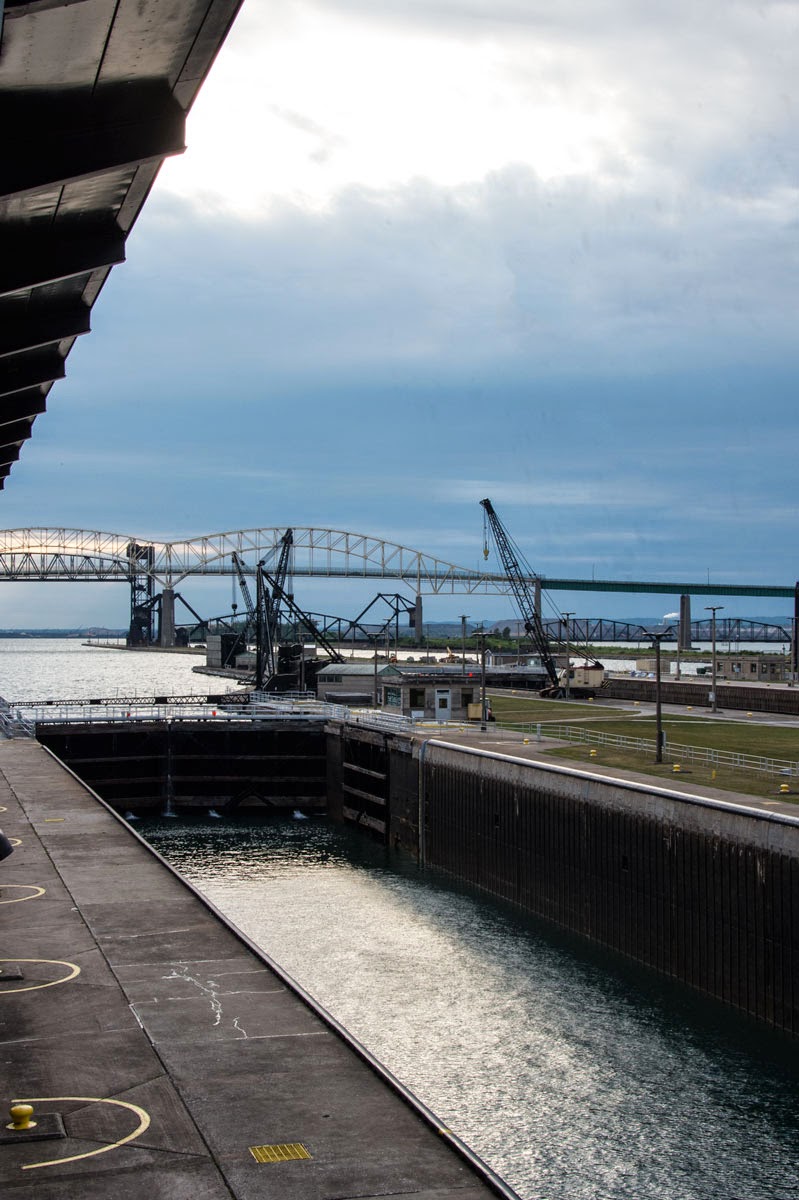 They started building these locks in 1914 to skirt around the rapids in the river between Lake Superior and Lake Huron.  Over the years, the ships have become bigger, requiring they be reconstructed.  Valves open in the floor of the lock, allowing water from above to enter and fill the lock.  Once the ship is inside, the gates are closed and a second set of valves open, allowing the water to run into the river below.  Once it has leveled out, the ship moves out towards the next lake.  Pretty brilliant those Engineers of Old!! 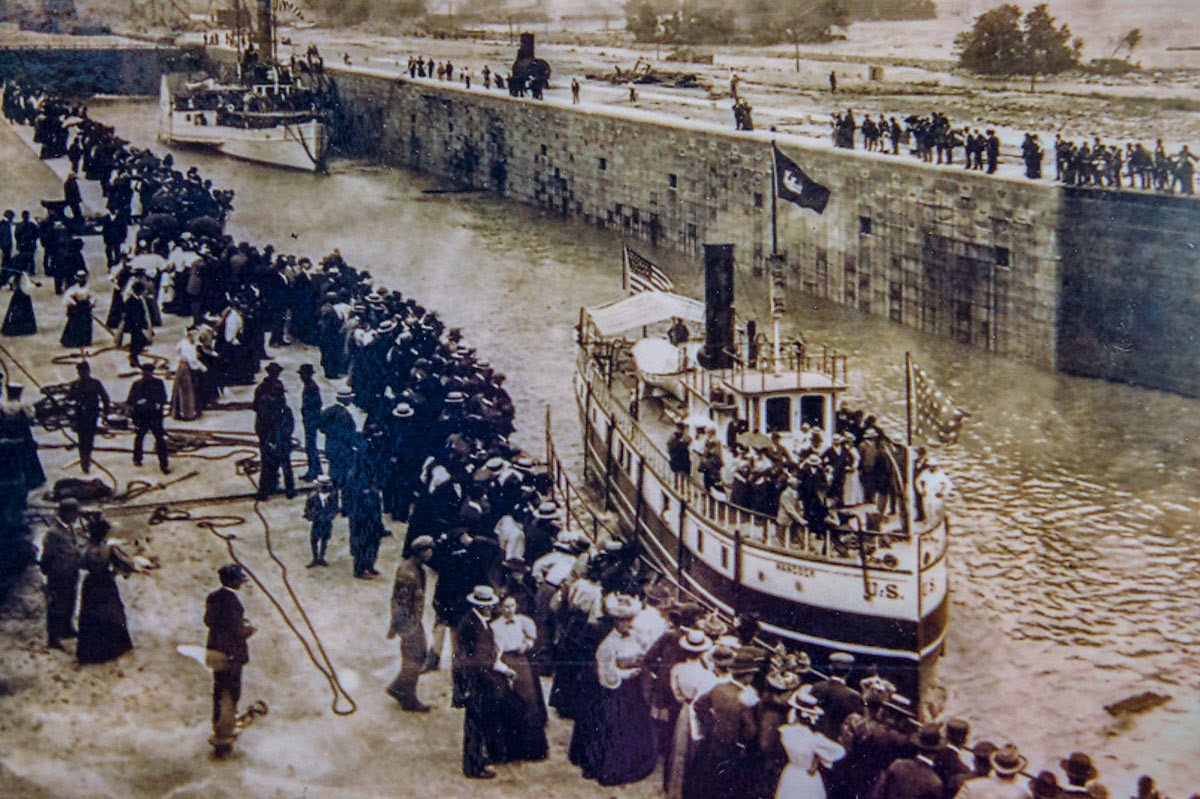 Everywhere you go, there are amazingly colorful flowers.  It certainly doesn't take long for winter to leave and spring to come into bloom!! 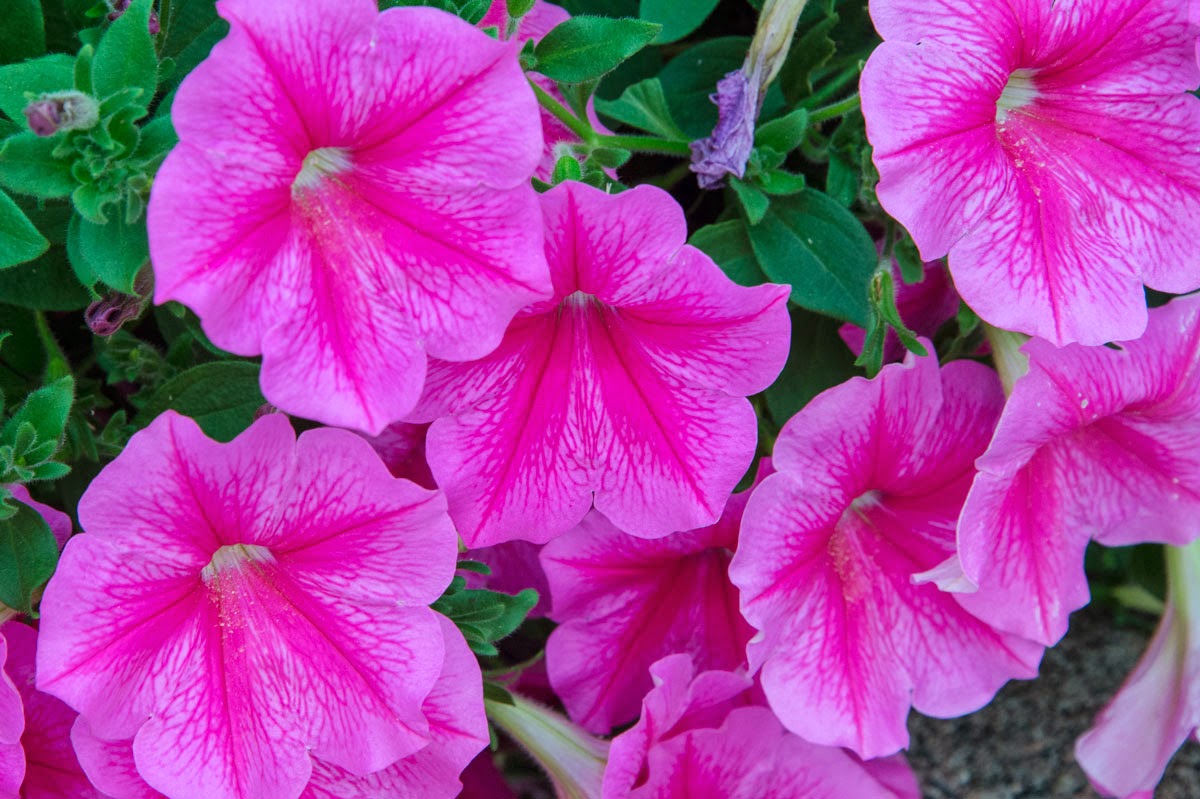 On the way back to the rigs, we stopped at a geocache so I could get a Michigan Medallion, and what should I find, but my first travel bug.  This tiny American Girl doll wants to travel around the world.  Since I have plenty of room, I'll give her a lift to Maine where I'll drop her off at a new cache and she'll wait for her next ride.  You can actually track her progress on the internet!! 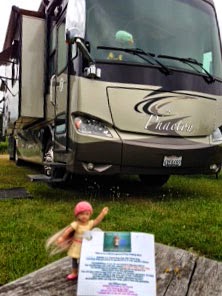 Yesterday the weather man said rain most of the day, which turned out to be so much more than I expected!!  Rain here means RAIN!!!!  BUCKETS OF RAIN AND HAIL!!  Barbara made a good call and we stayed home to weather watch.   While here, the Tregurtha came by ... one of the biggest Lakers sailing the Great Lakes.  She's over 1013 feet long and 96 feet wide.  The small tug at her side kept her straight on course until she peeled off and they blew their horns ... which was deafening!!!  I could watch these babies all day!!!  And that's exactly what I did!! 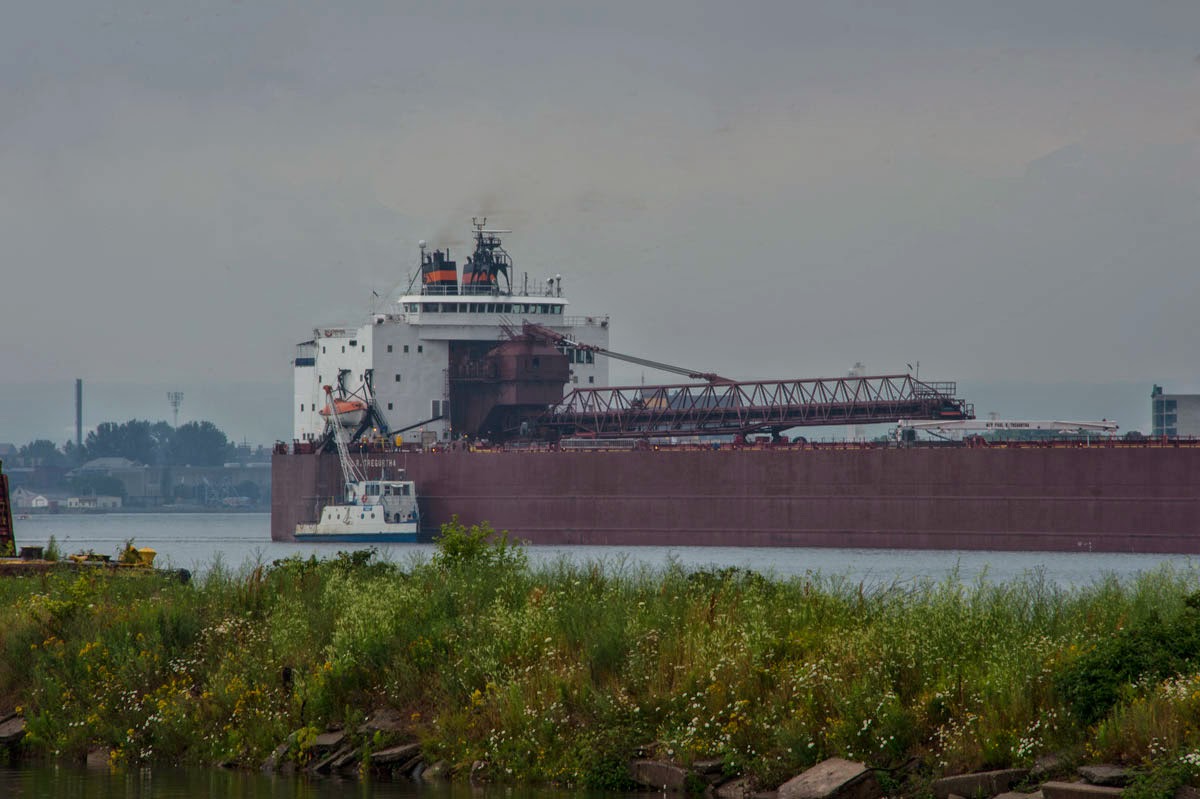 The view here never gets old ... nor does the picture-taking, balancing on my steps trying not to get wet!! 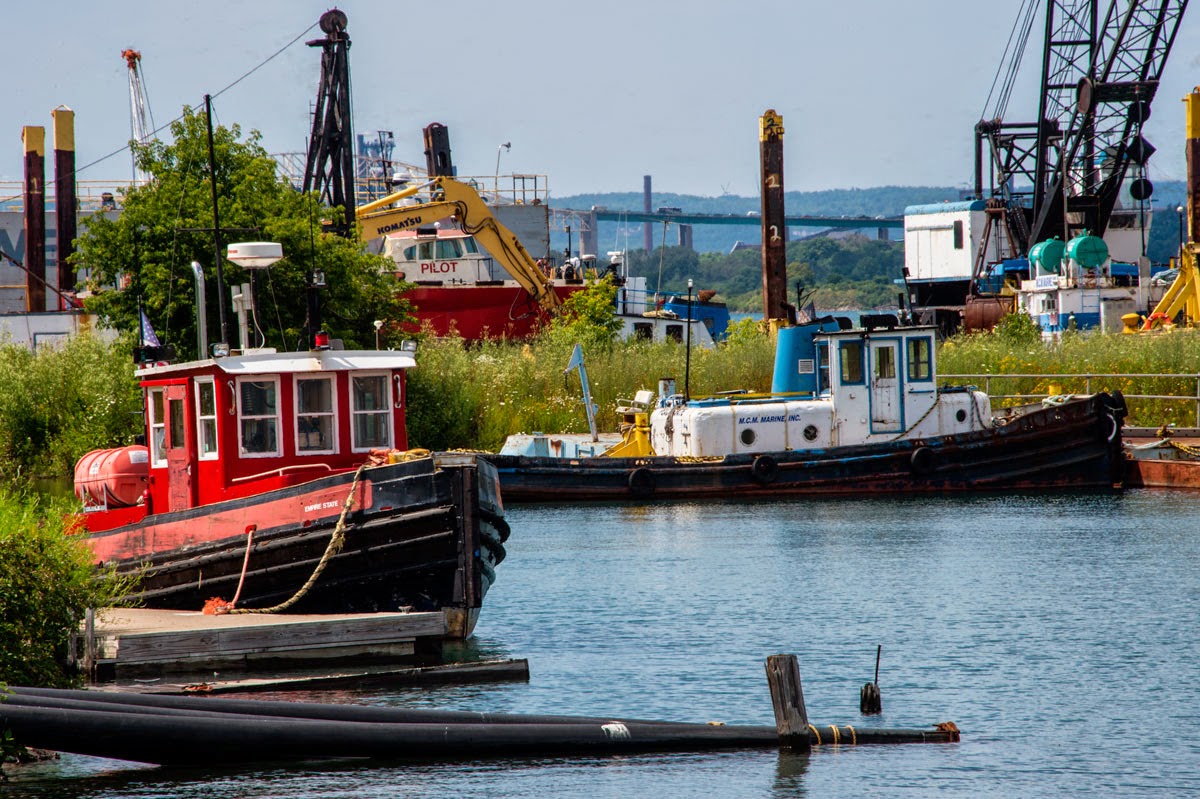 Every time it cleared up a might, I would check Marine Traffic and run out for pictures.  Mostly they glide by with hardly any sound ... you can tell from the black smoke that this guy was quite noisy, his diesel engines a little older like me!  Most of these Lakers have only one screw (a big propeller) to move them through the water, which means they really aren't very maneuverable like the cruise ships of today. 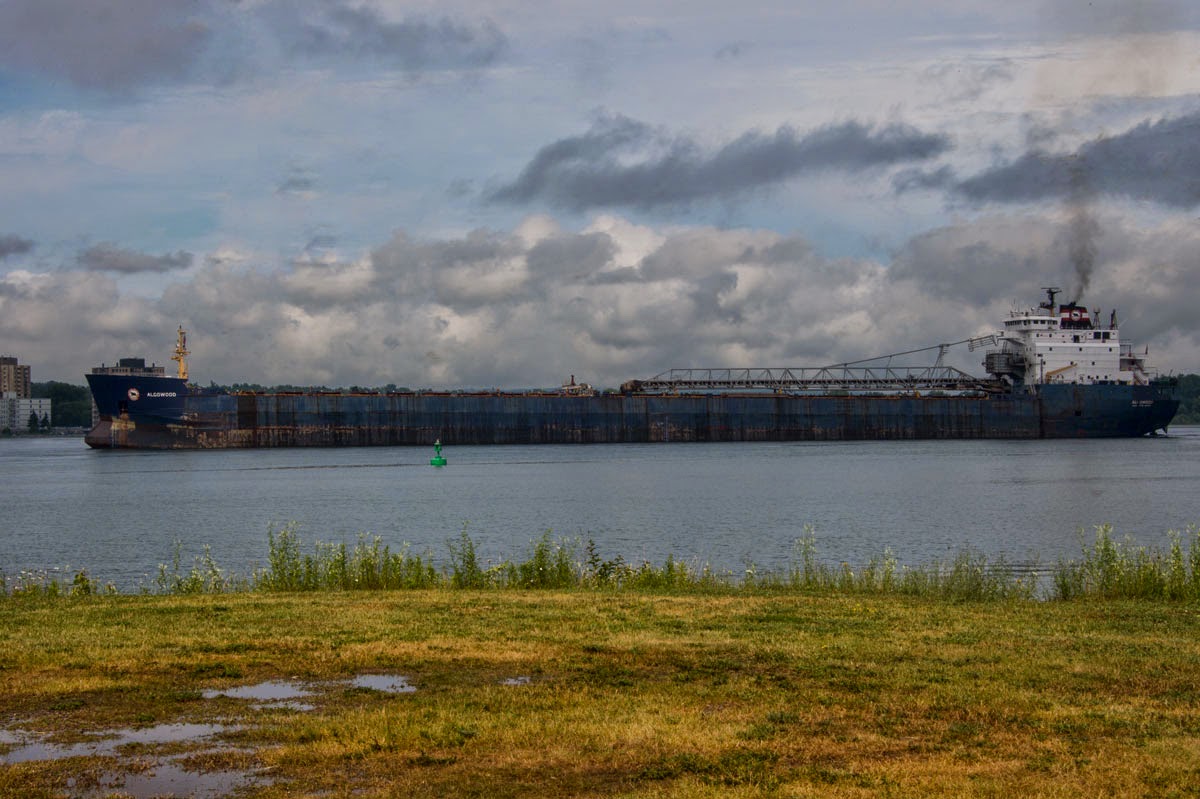 And then the rain came again!!  With lots of lightning cracking overhead, I tried to get an image of the flash, but it was not to be this time.  Barbara said it's time to knit ... keeping our minds off the terrible cracking and rumbling directly overhead ... ice cream works better for me, but since it rained all day, I was out!! 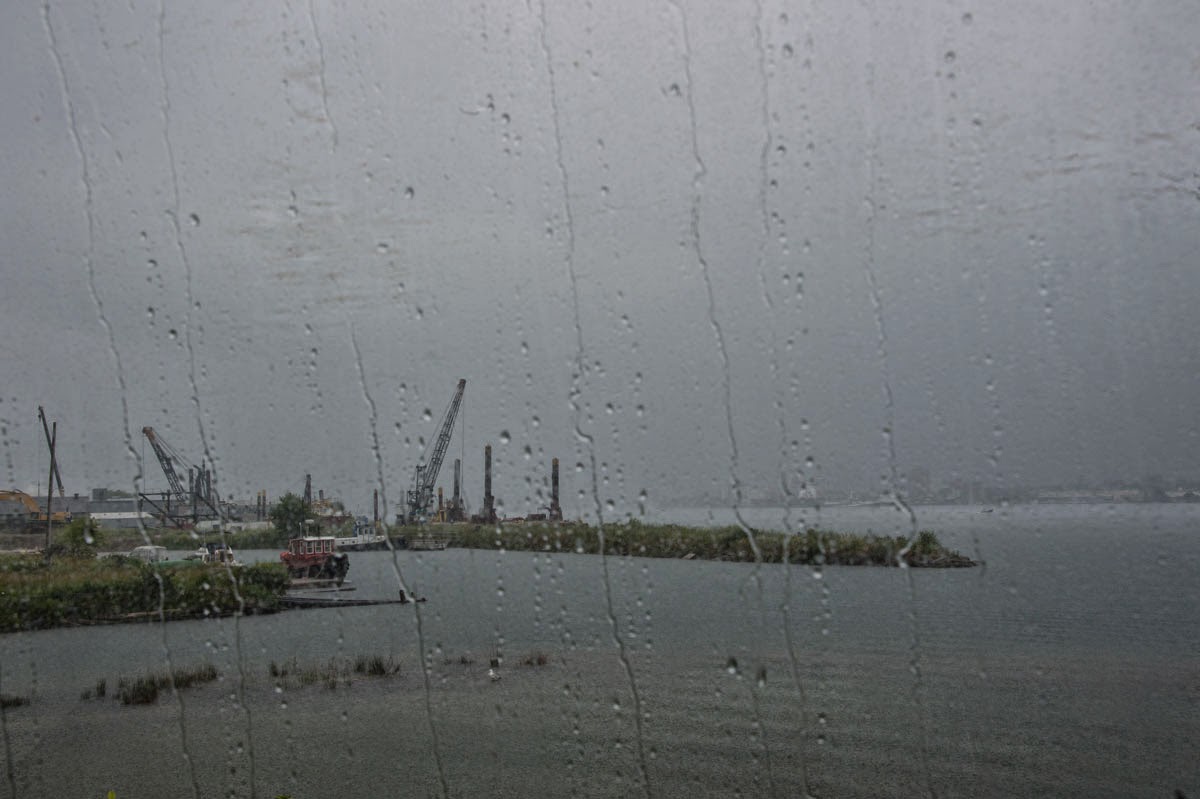 The rain let up late in the afternoon and I put my satellite dish back up, having lowered it several times.  No use testing Mother Nature's ability to aim that lightning!! 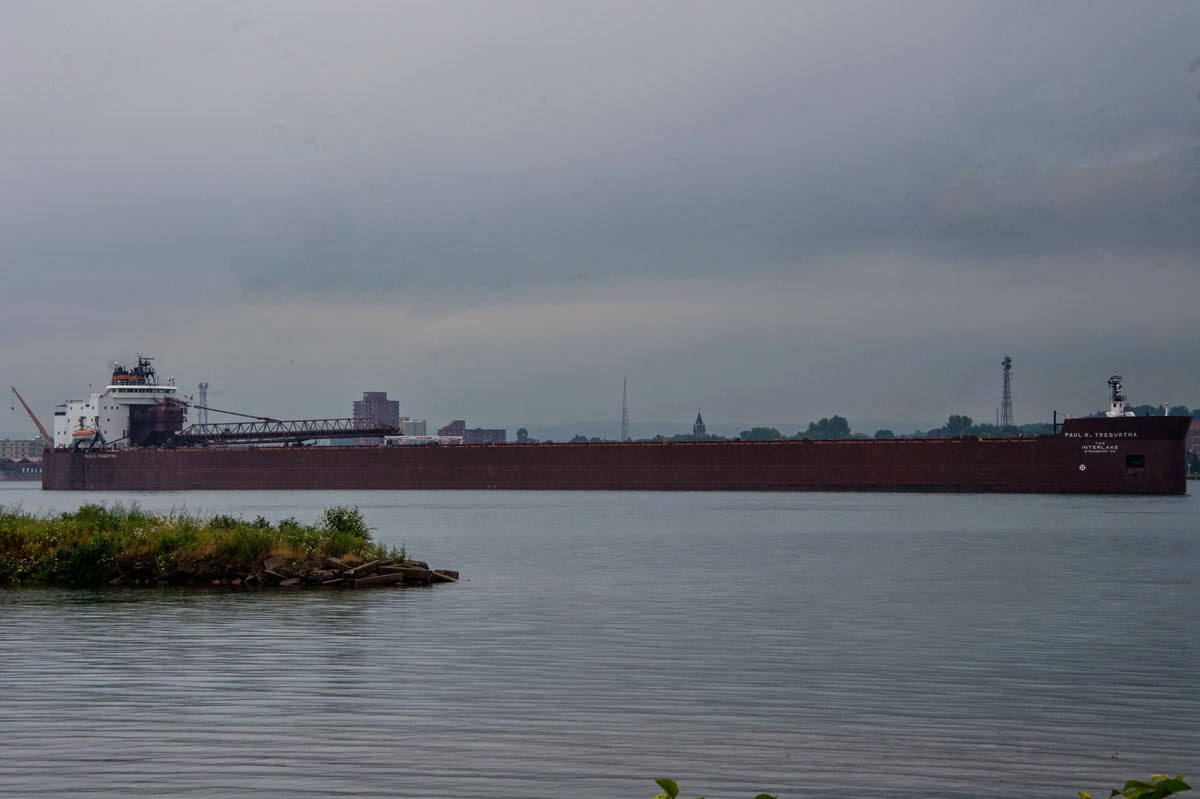 The local Canadian geese were out on the water, so I took the camera out just in time to see this guy flapping his wings like crazy, but not going anywhere. 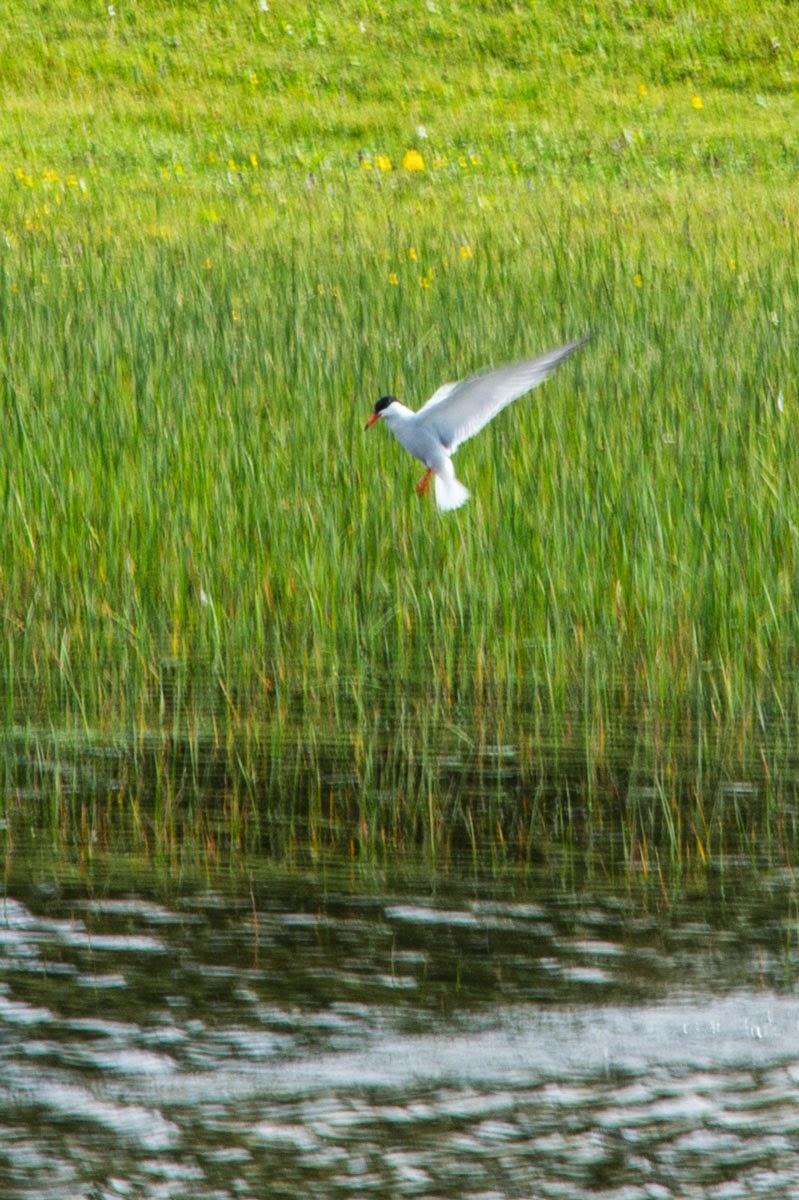 All of a sudden he would just fall from the sky into the water, hoping to catch a fish I imagine, then again flap his wings like crazy to come up and take off.  He was so fast, I barely caught this image.  I never did see anything in his beak .. but he dove at least six times before flying off.  I looked on-line for information on his name, but only found the Bird Bar and Restaurant!! 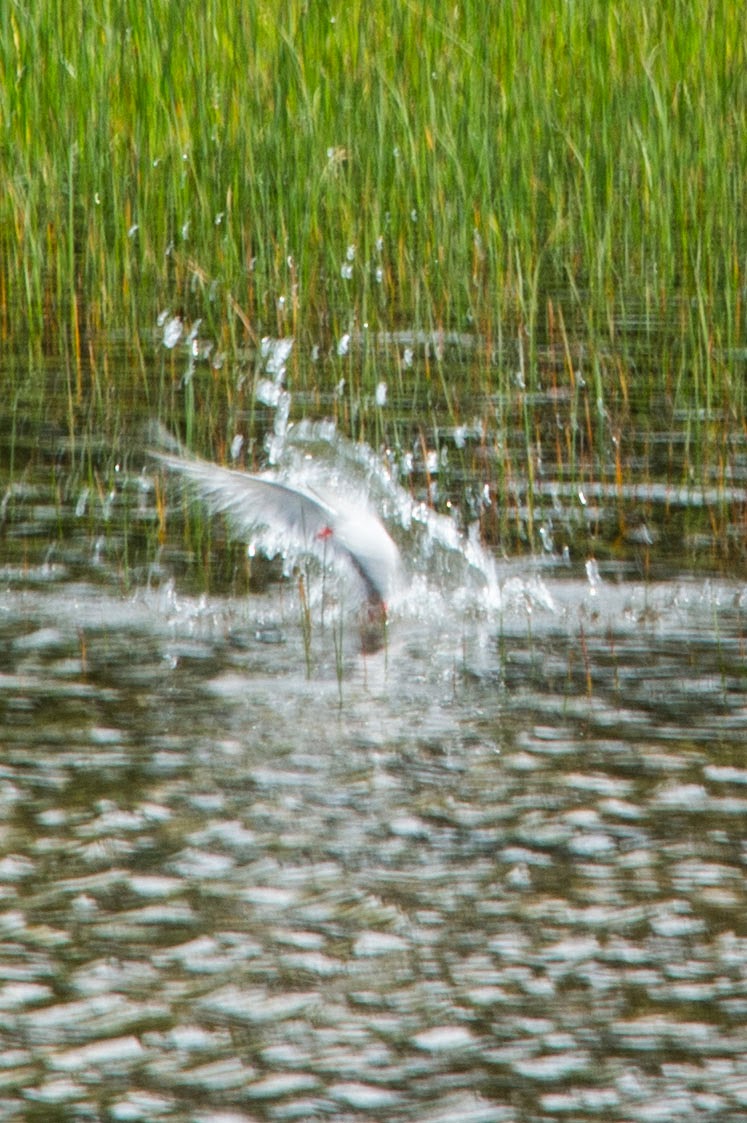 Since the Elks are booked solid (they only have four sites) I have to move out today to basically free camping at the Kewadin Casino a couple of miles away, but will be back at this site for most of the week.  If this is the only Elks Lodge you camp at, believe me it is well worth the membership fees!!