If you ever wanted to know what it was like to live in the "old" days, Missouri Town 1855 will give you that experience.  Seniors pay $3.00 to walk down the lane to the town and see how far we have come in a measly 159 years.  I mean really ... it has taken some countries thousands of years to get to where we are!!  Soaked in Cutter bug spray, accentuated with eau de Tea Tree Oil that I dropped on the floor of my rig (can you imagine the mess??) we were off to see the old days.

As you head towards the town, there is a bison (not buffalo) and elk preserve to give you an idea of local wildlife.  The "local" locals were also present, showing once again that SOME of our groups of humans haven't evolved as much as others.  SOME can't read the signs that say "Don't Feed the Bison" ... "Don't Touch The Bison" ... "Stay Away From The Fence" .......  natural selectivity I guess, because this female bison could easily crash through the fence when the apples ran out.  After all, they are NOT pets, even if they are acting nice at the moment. 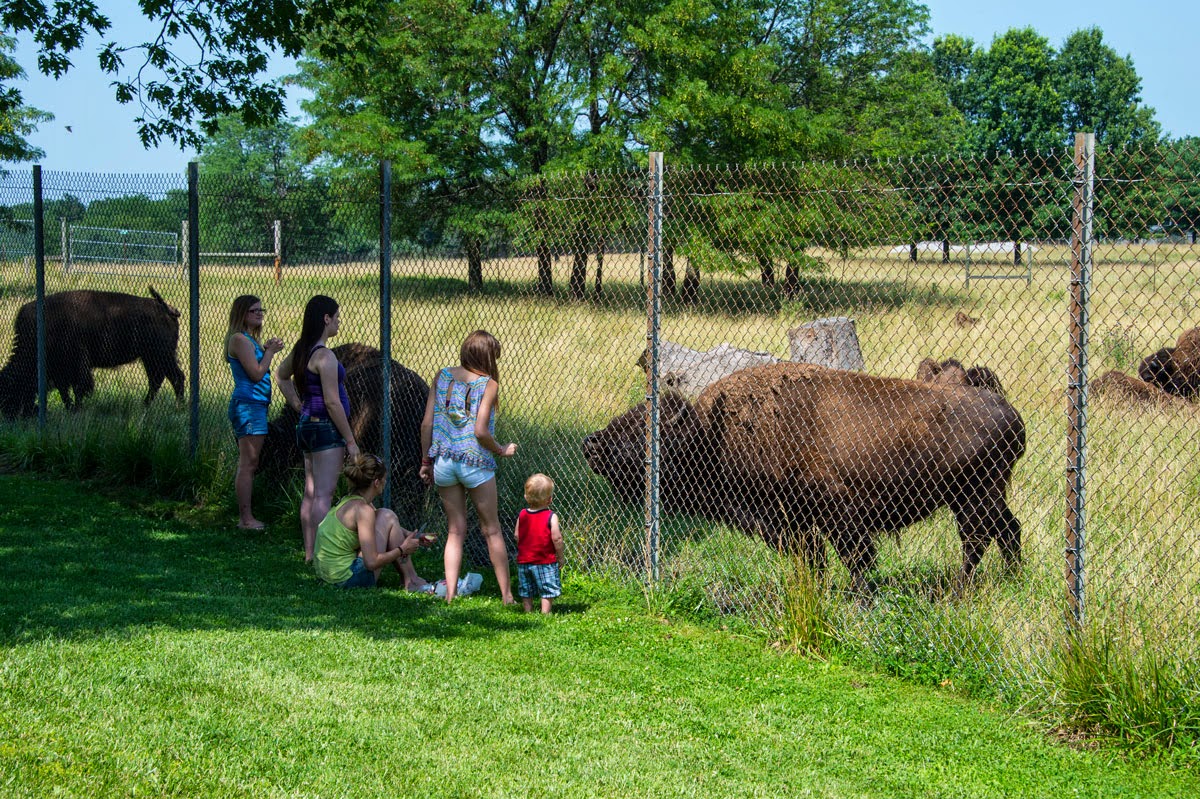 This big guy has just discovered that the same group of humans is now feeding his mate ... and he's NOT about to let that happen.  He got up and regally swaggered down to chase her off. 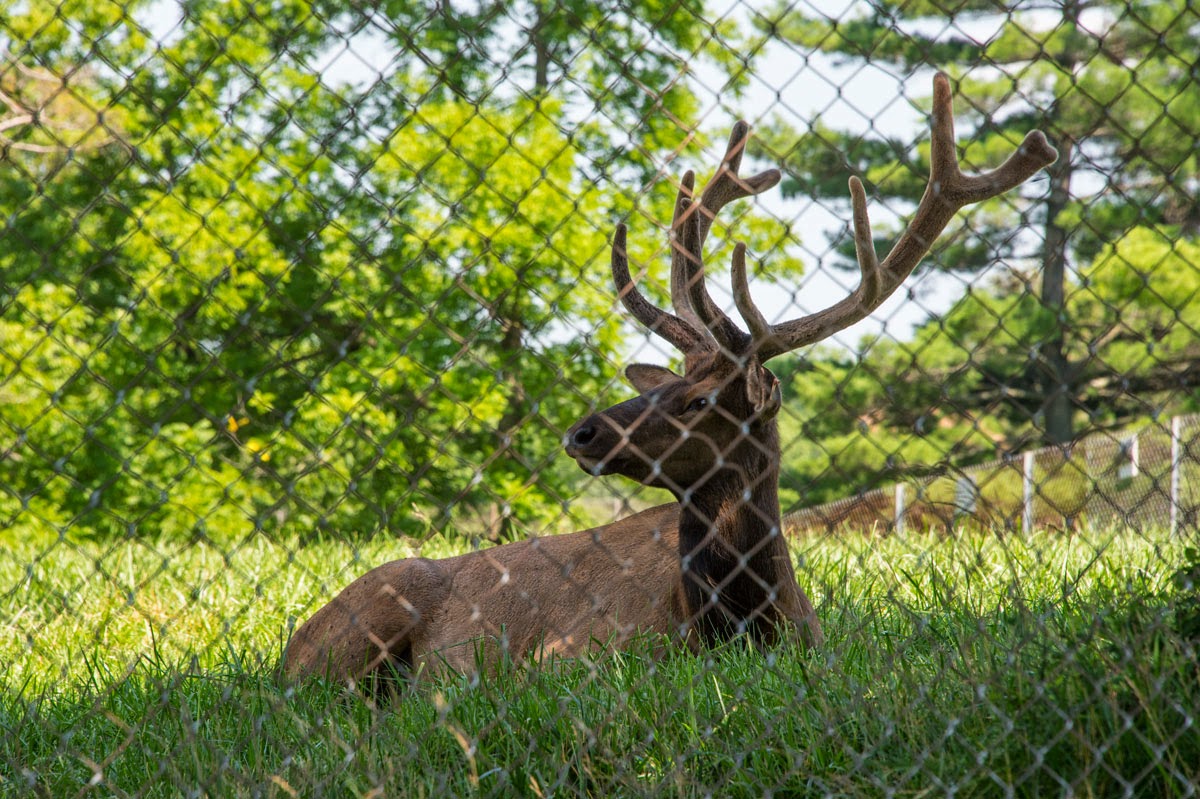 As WE swaggered down the lane to Missouri Town, this was our first site.  Each building has been painstakingly dismantled and reassembled here on the same type of rock foundations they were originally built on.  The Colonel's house is on the left, one of the very few you can't look inside.  The middle building is that of the carpenter.  He works on the right, lives on the left side.  Of course the kids had to attend school, and probably hated it ... the schoolhouse is the taller building to the right.  Complete with original benches, school books and chalkboards, it's a look back into time. 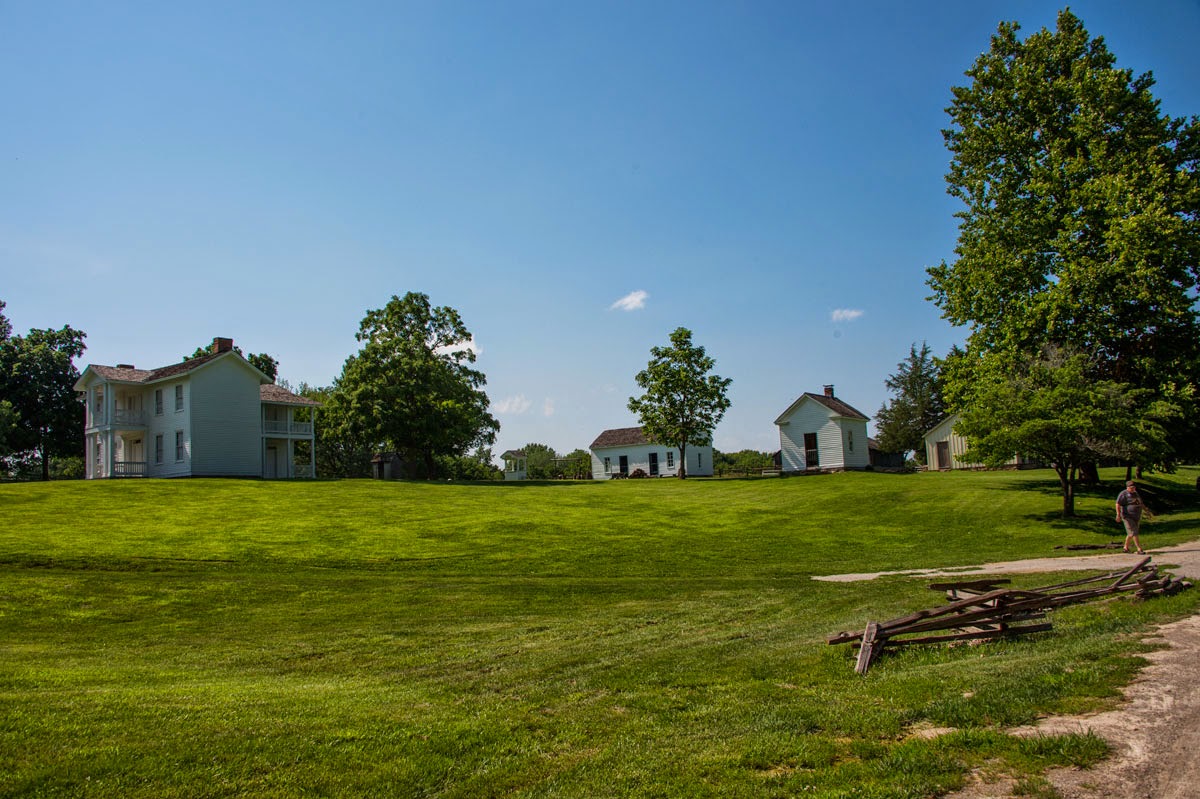 Dressed in 1850's attire, you will meet and converse with characters representing people who would have lived here.  We spoke to the owner of the Mercantile, who said if he didn't have it, he could order it for you.  Once a week, he rides over to another town with a telegraph machine, places his order and picks it up 2 weeks later when it arrives in a steamboat down the Missouri.  We asked if he expected a shipment from the Arabia, and he said "no, it sank last year".  On weekends, there are many more characters, but this day, only a few.  He had boxes of pineapple, horseradish, candy and horseshoe nails, among other items, some of which are actually for sale. 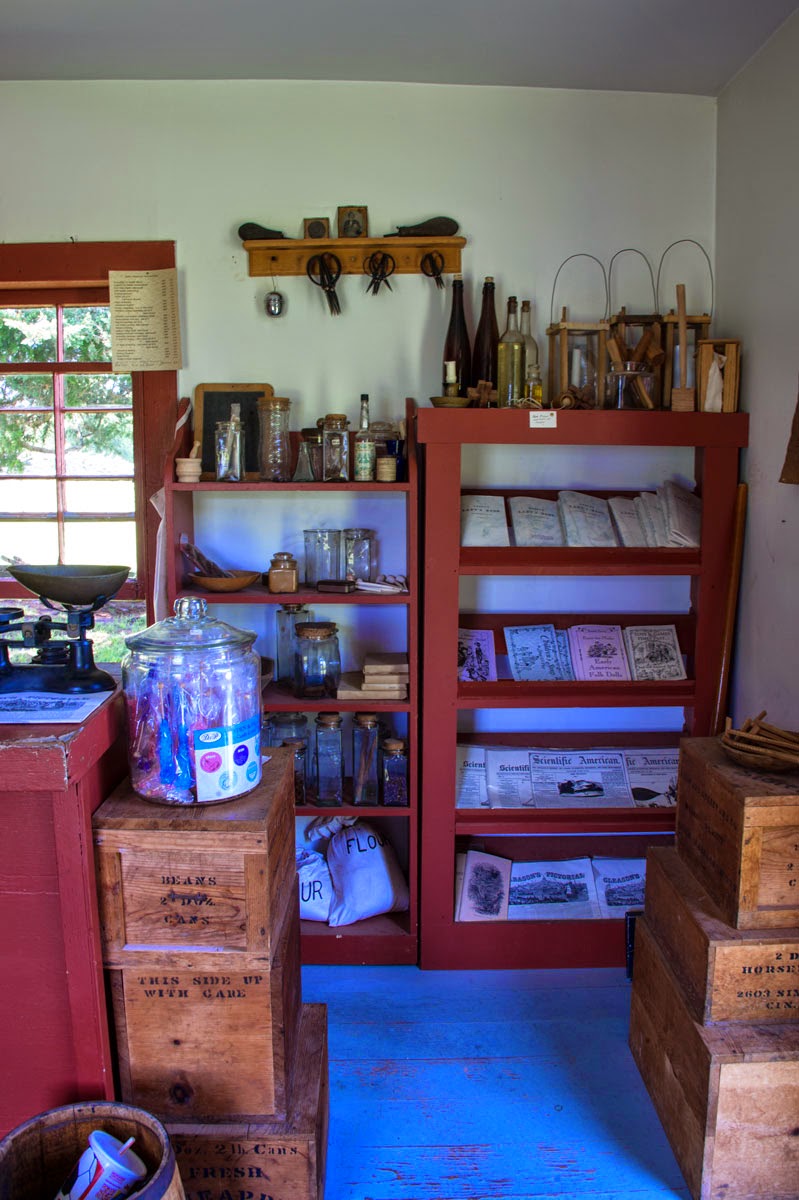 This is the Blacksmiths house ... he was pretty rich for those days, with a large two room cabin.  I was interested in the three dutch ovens stacked by the fireplace.  That's where all the cooking happened. 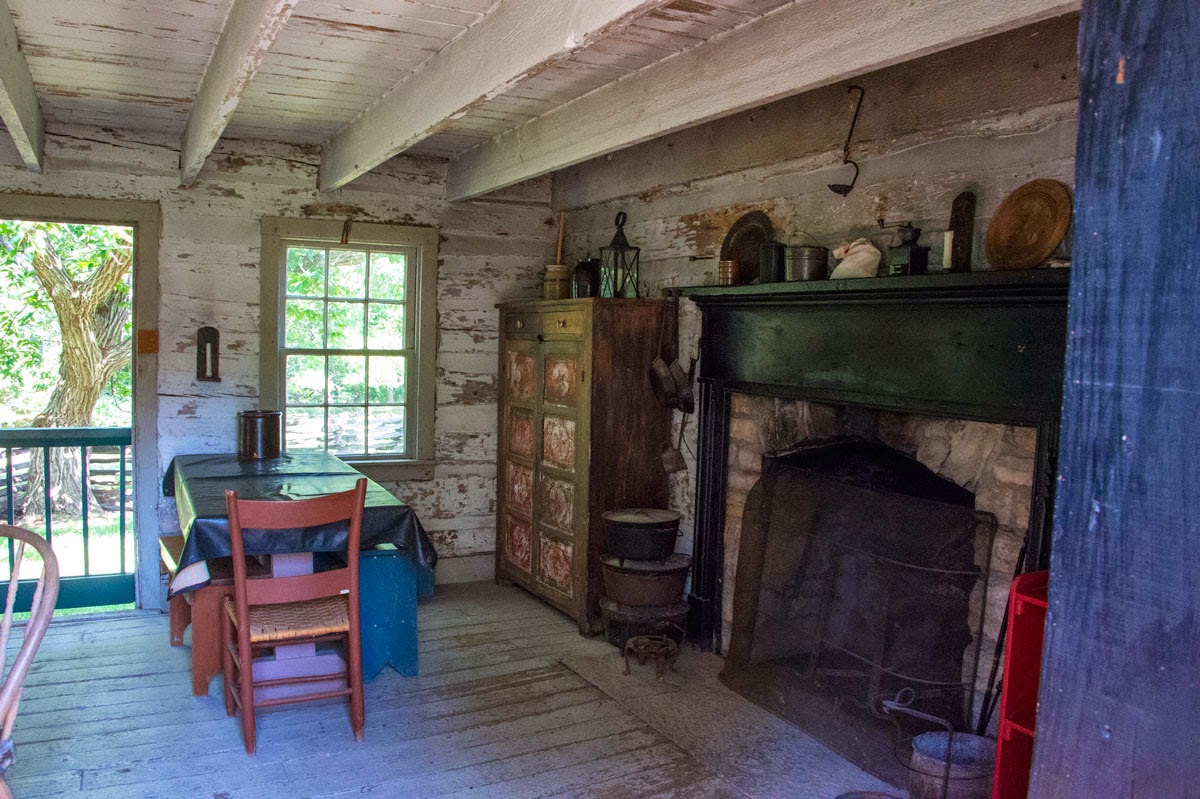 This amazing bed stands in the other room, complete with a VERY old quilt in a design of the times.  Tied to the bottom of the bed were bags of herbs to keep the bedbugs and chiggers out.  I TOTALLY understand that!!

We stopped in at the tavern (local hotel) where stagecoach travelers spent the night ... men on one side of the dogtrot breezeway, women on the other.  Several chickens were lounging in the shade, as one of the "residents" came by with a can of sweet feed, looking for the sheep that were grazing around the buildings.  She came to gather them up to the barn for the night. 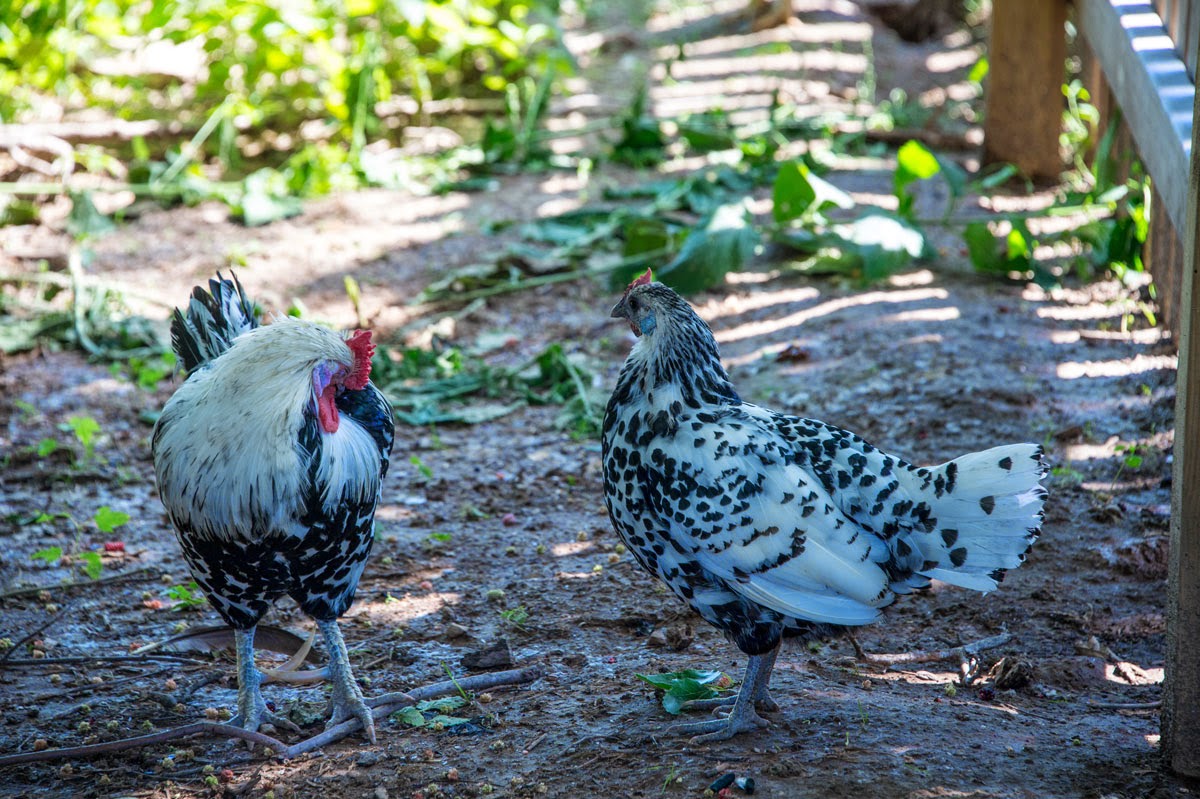 Some of the buildings, owned by the farmers, had vegetable gardens in back, growing real vegetables!!  When fully staffed, each actor plays the part of the person who would have lived there.  The sheep, having been recently shorn and the wool traded for food and needed implements, were herded back to the barn so local kids wouldn't chase them at night. 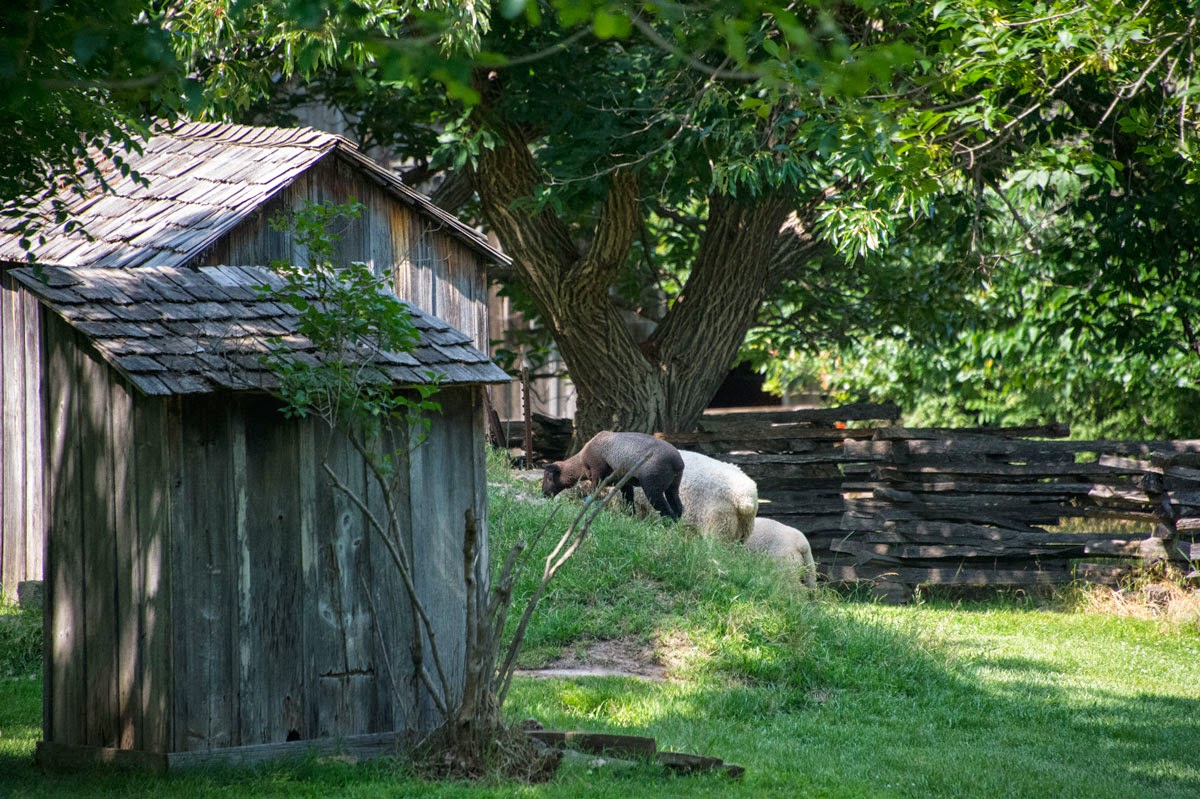 The Blacksmith looked like the richest guy on the block ... except for the Colonel.  Compare this to the Skills USA competition ... we've come a long way baby!!! 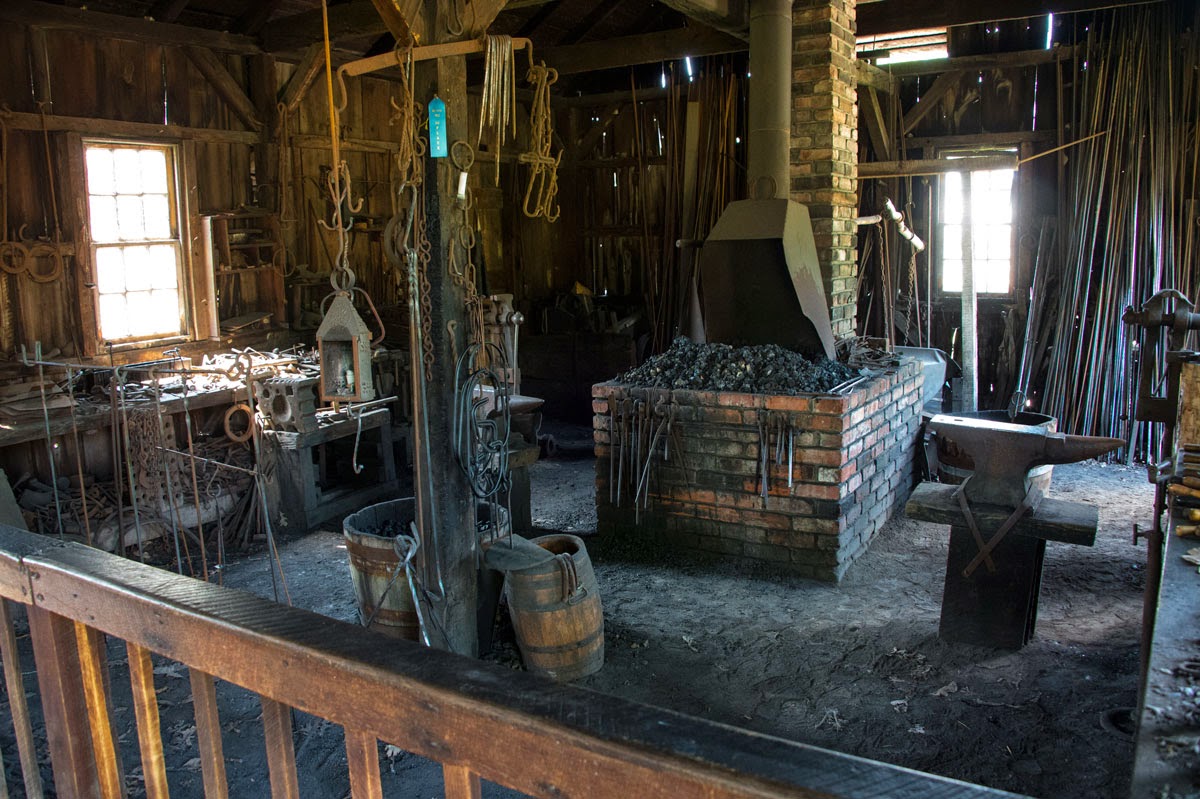 In a shed behind one cabin was tobacco, hanging alongside three large barrels of drinking water, since there were no wells.  I did spy a couple of not-very-well-hidden fire hydrants though!! 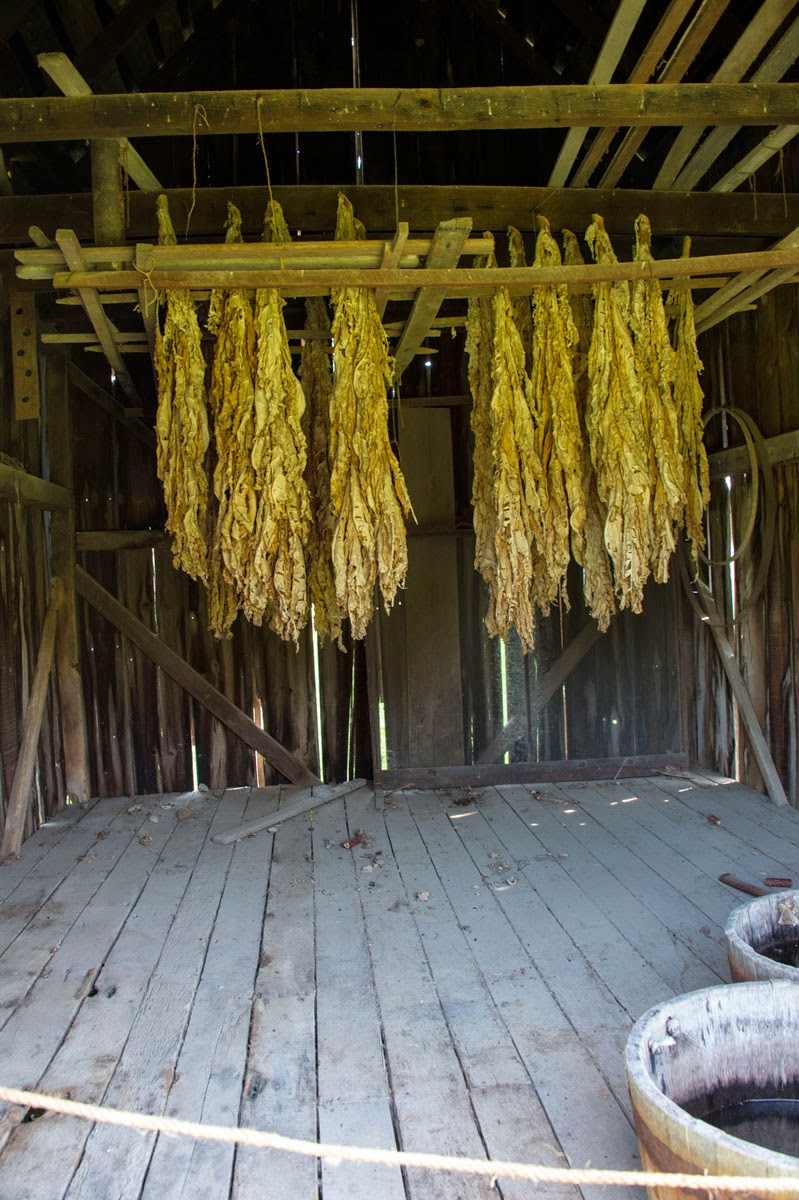 There were several barns on the property, including this beautiful red one.  Each house had it's own outhouse ... or privy as they called them.  This one had a dramatic backward tilt. 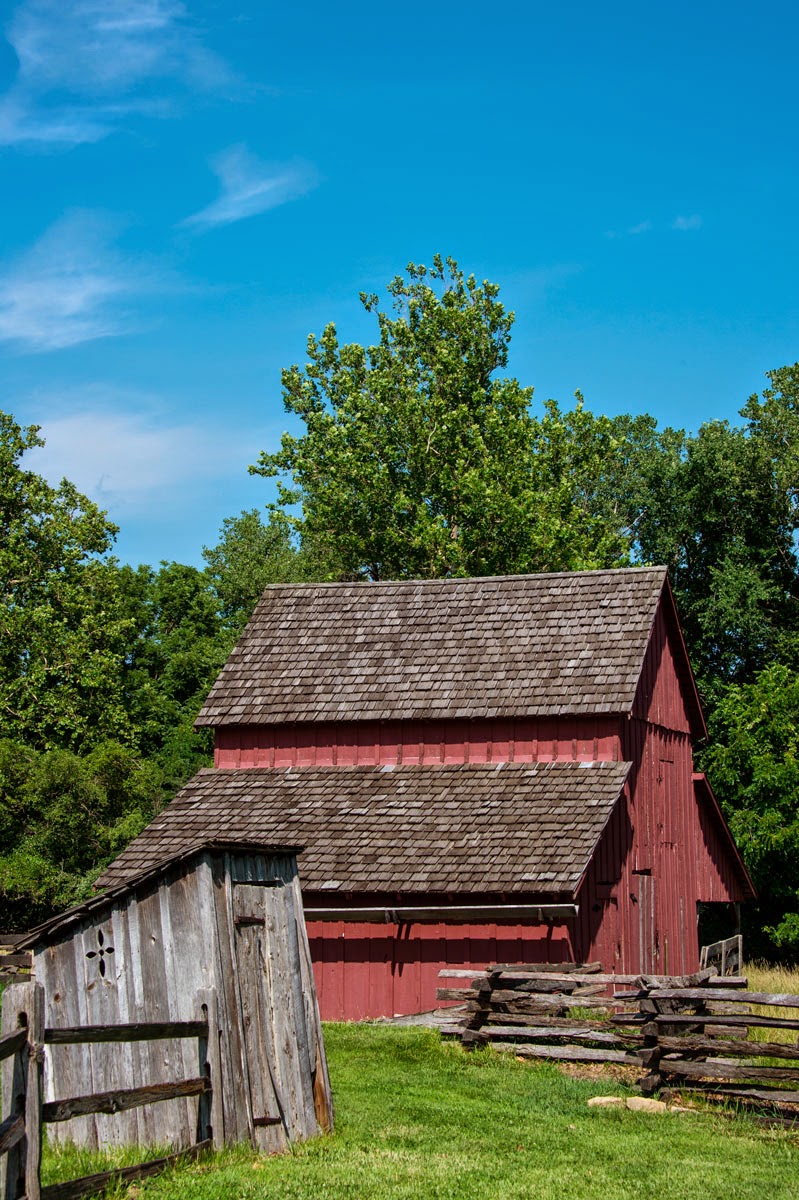 We didn't have time to go to the Squire's house up on the hill, owned by the rich Southerner who had a huge farming operation, but in the field with the most grass were two head of his cattle ... I call them cattle, Barbara calls them oxen ... used to plow the fields and grade the roads.

The primitive Settlor's cabin was the last one in town, but probably the first to settle here.  He had a root cellar for vegetables and tornados and a hog shed, complete with hogs.  There was a log Church, built in the shape of a cross with twelve corners for the twelve apostles, a Law Office with a desk and a bed ... he ate at the tavern because he was rich ... and a livery stable for horse and buggy rentals.  All in all, an amazing little town that lets you imagine life in the 1850's, which I'm thinking was pretty boring!!  I can see why people wanted to "go West young man"!!!

On the way out we saw this gorgeous doe dance across the lawn and head into the bushes.  Wow, this town really DOES have everything!! 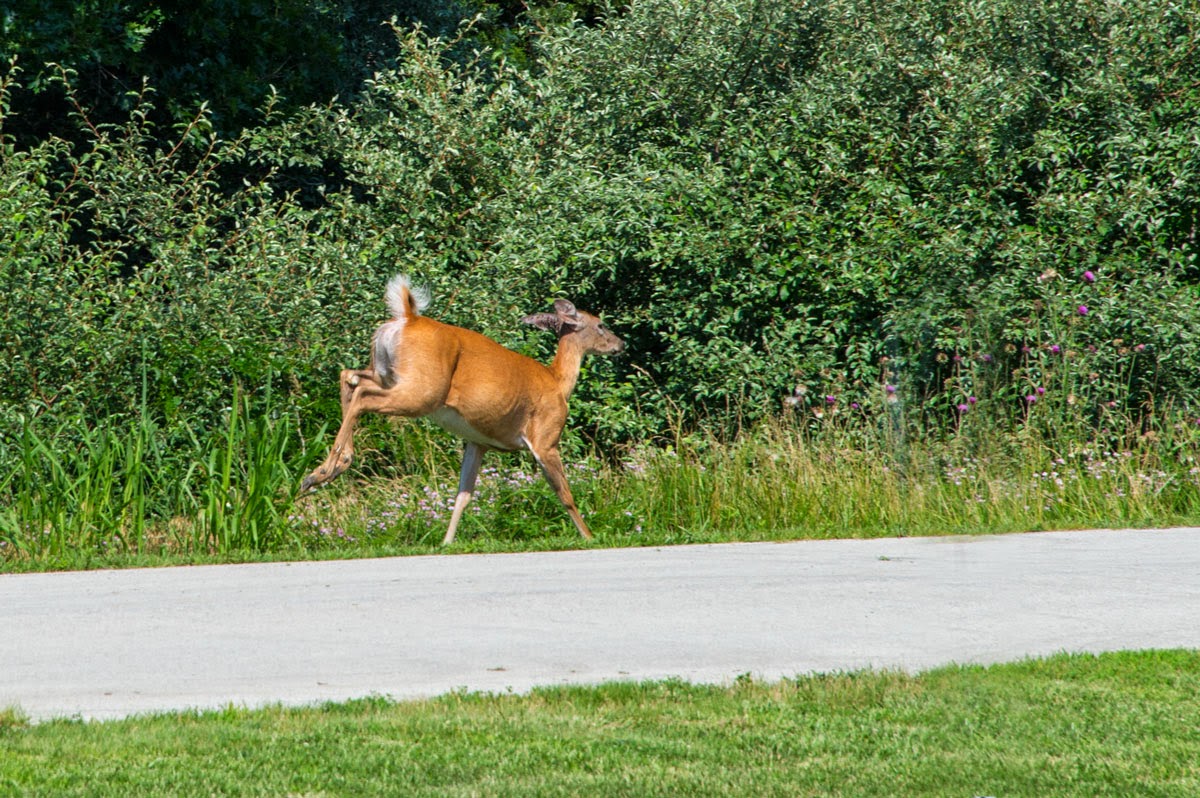 Another local site in Lee's Summit is the Longview Farm.  Sound familiar??  Robert Long of Longview Washington lumber fame, moved to Kansas City.  To keep his wife happy, in 1913 he built the world's most beautiful farm for her horses, jersey cows, hogs and chickens, including underground electricity and 225 acres of front yard.  He didn't want to buy antique furniture for the house because it was "used", so he had new replicas built in New York.  With over 50 buildings, including barns for each type of horse used, a hospital barn, a milk house for bottling milk, an ice plant and a blacksmith shop with eventually a hospital and school ... this place was huge and covered over 1700 acres. 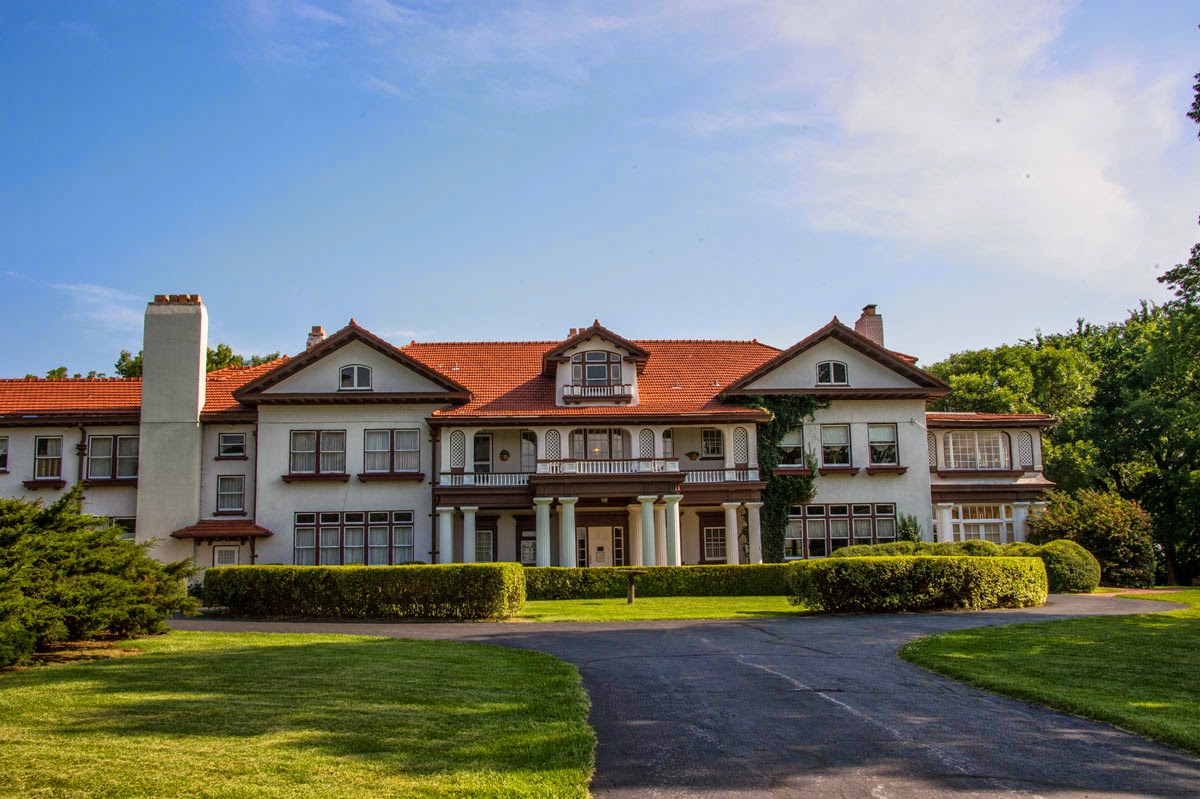 Both daughters lived in the house with 14 bedrooms, the first central vacuum system and steamship heating until they passed in 1970 at the ages of 90 and 91.  With over 300 head of horses, 800 head of cattle, 375 head of hogs, they employed over 200 ranch hands to keep it going.  Unfortunately many of the buildings are gone, replaced by a subdivision, but the amazing horse barns remain, along with the house and gardens used mostly for weddings.  So fascinated with horses, in 1920 daughter Loula won 31 championships in only 16 shows.  She had the money to buy all the best horses from around the world.  Now that's MY kind of girl!!! 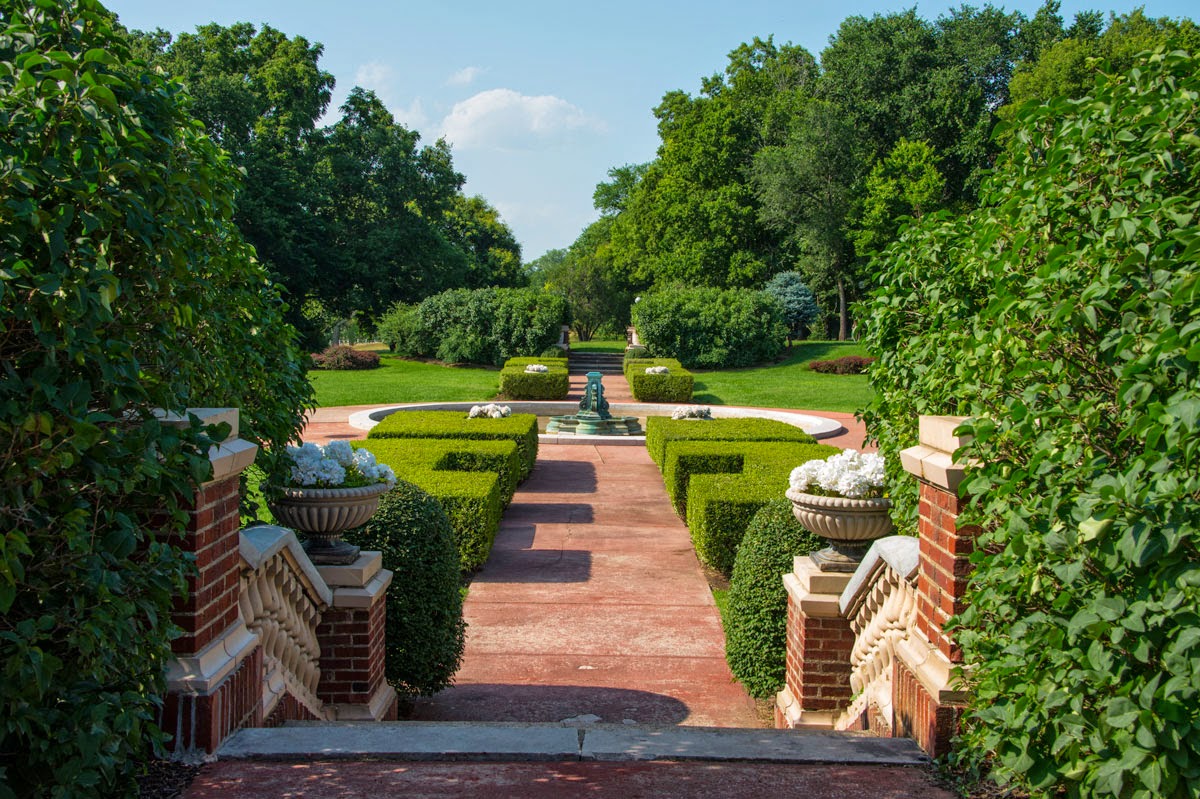 On the way home we decided to hit Red Robin for a burger with a never ending Root Beer Float ... they'll bring as many as you can drink ... but my Salted Caramel shake didn't hit the mark at all.  Usually it's just a slight shake of salt over the caramel ... this one had 1/4 inch chunks of salt mixed all through the ice cream.  I ate the first few bites, but pretty soon that 1/4 cup of salt chunks got the best of me ... I told the waitress it was awful, and she agreed.  In exchange, I got TWO full glasses of chocolate milkshake!!  Thank you Red Robin ... you're okay in my book!!! 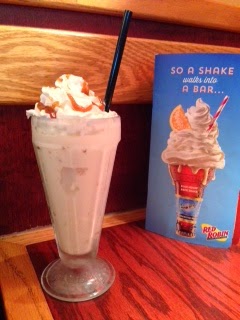 Amazingly, after walking all over the Missouri Town grass, I have NO new bug bites!!  Between the bug spray and the tea tree oil, I don't smell too pretty ... but I repeat, NO new bug bites!!!  YAY!!!!  We're heading out this morning to St. Louis.  It looks like the next few days will be storm free.  Keep your fingers crossed for us!!!