As you drive through all the little, and sometimes big, towns and cities, you wonder what they are known for.  Okay, maybe you don't ... but I always think about who was the first to live there and why.  Not being a big history fan in school, I had no idea Springfield would be all about Honest Abe Lincoln, a local hard working boy who became President at probably the worst time in our country's short history.  Just drop by Springfield and you will learn all about it.

At the Lincoln Presidential Museum, you can meet the family up close and personal.  This is not your ordinary museum.  It was $9 for a senior and well worth the price of admission. 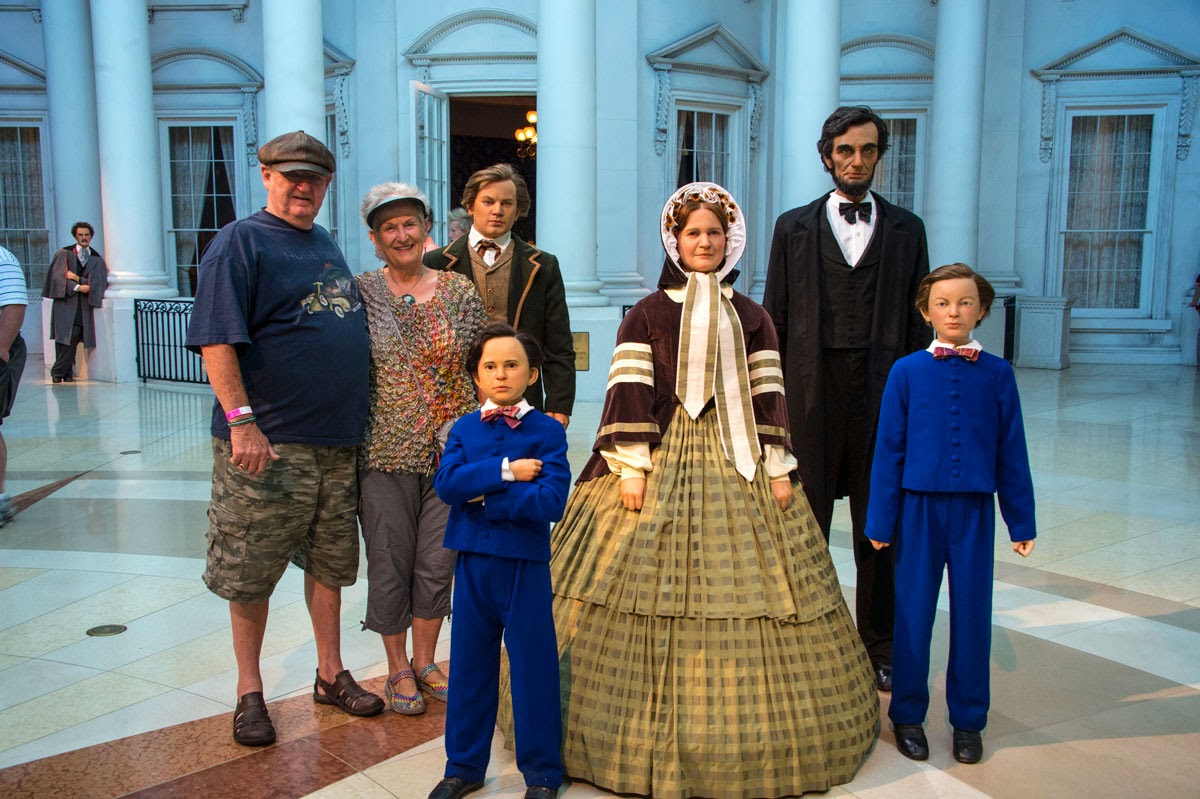 First you walk through President Lincoln's early life, into the log cabin he lived in with his father, step mother and family where he taught himself to read by the fireplace at night.  He was named after his Grandfather who was killed by a Native American while clearing a field. 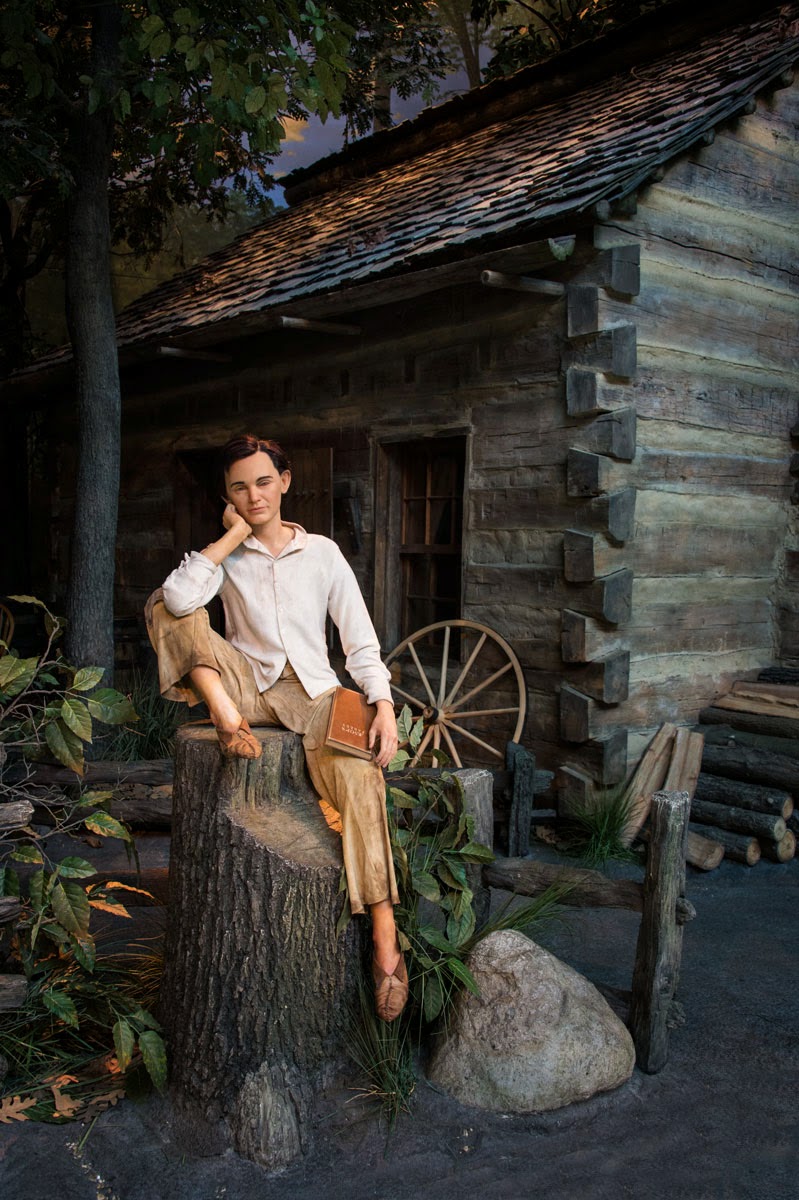 He worked hauling freight down the Mississippi in Illinois ..... 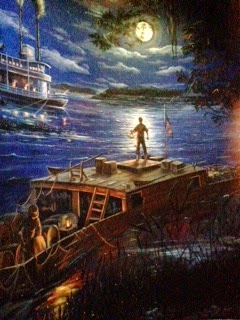 and went from being a store clerk, to a surveyor, a militia soldier (where he said he was always hungry) .... 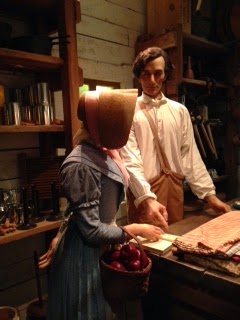 To finally becoming a lawyer.  He had one or two girlfriends, depending on who you ask, one of whom died, before he met and married Mary Todd, from a very well off family.  Apparently he was every kids dream of a dad ... he let them run wild around his law offices as well as at home. 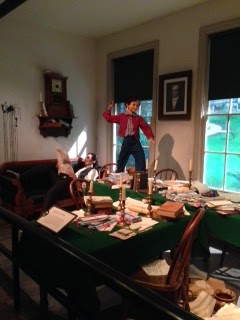 Having been elected during the worst time in our history, his goal was to reunite the states that had seceded from the union and abolish slavery.  That's a pretty big job that he had to handle between bouts of depression and melancholy over the death of three of his children.  The other big problem was that of being considered "country folk" when it came to the big city of Washington DC.  Required to give parties and be the bell of the ball, Mary didn't fit in and was constantly the topic of gossip among the socialites because of the "flower pot" on her head and her low-cut gowns.  Having come from a rich family, she wasted no time having dresses made for the balls, some even priced at $1,500 THEN, equivalent to $7,000 now!!  It was reported President Lincoln was very angry about her spending. 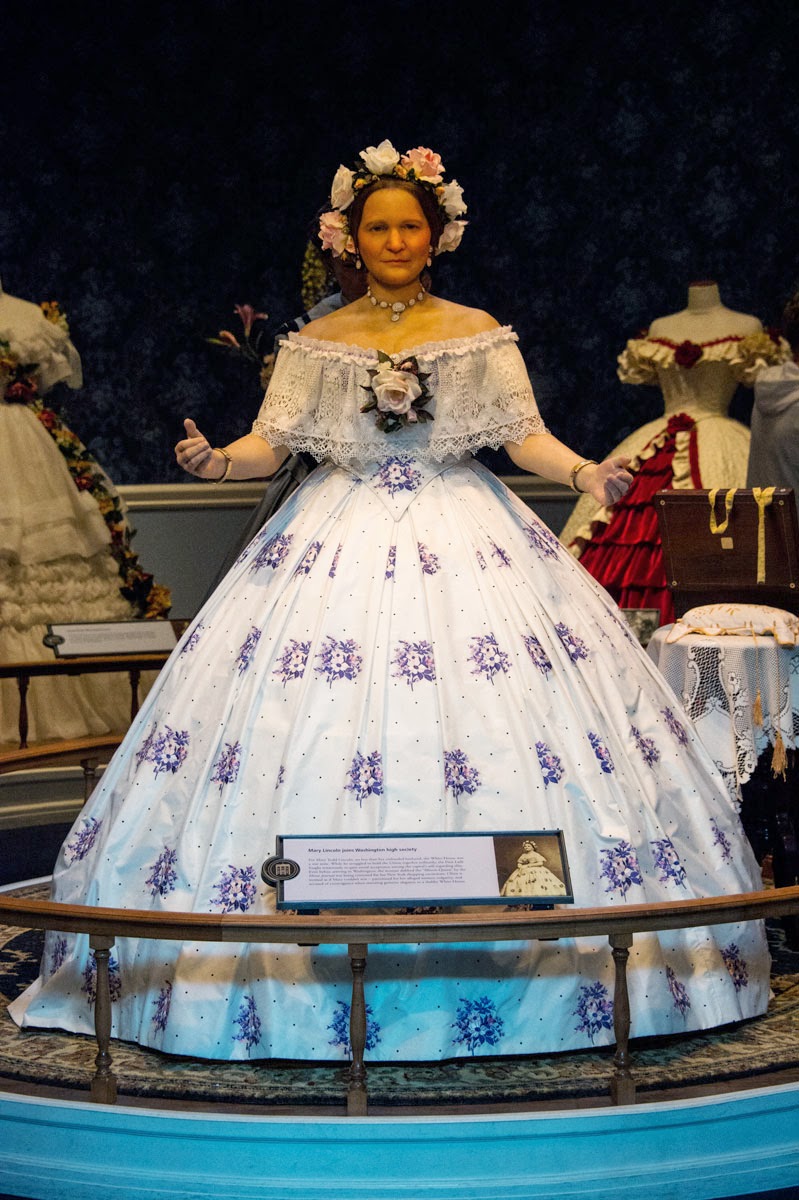 By the way, you are not allowed to take pictures anywhere but in the main lobby area.  These shots are inside the White House display, only because I have a long telephoto lens.  As much as they wanted to tell me "no pictures", they couldn't because I was still standing on the MARBLE floor.  These replicas were made at a ridiculous cost of $50,000 ... I'm sure I could have gotten the swags at Michaels cheaper!!!  At any rate, flowers were the IN thing to hang on your dress in the 1860's. 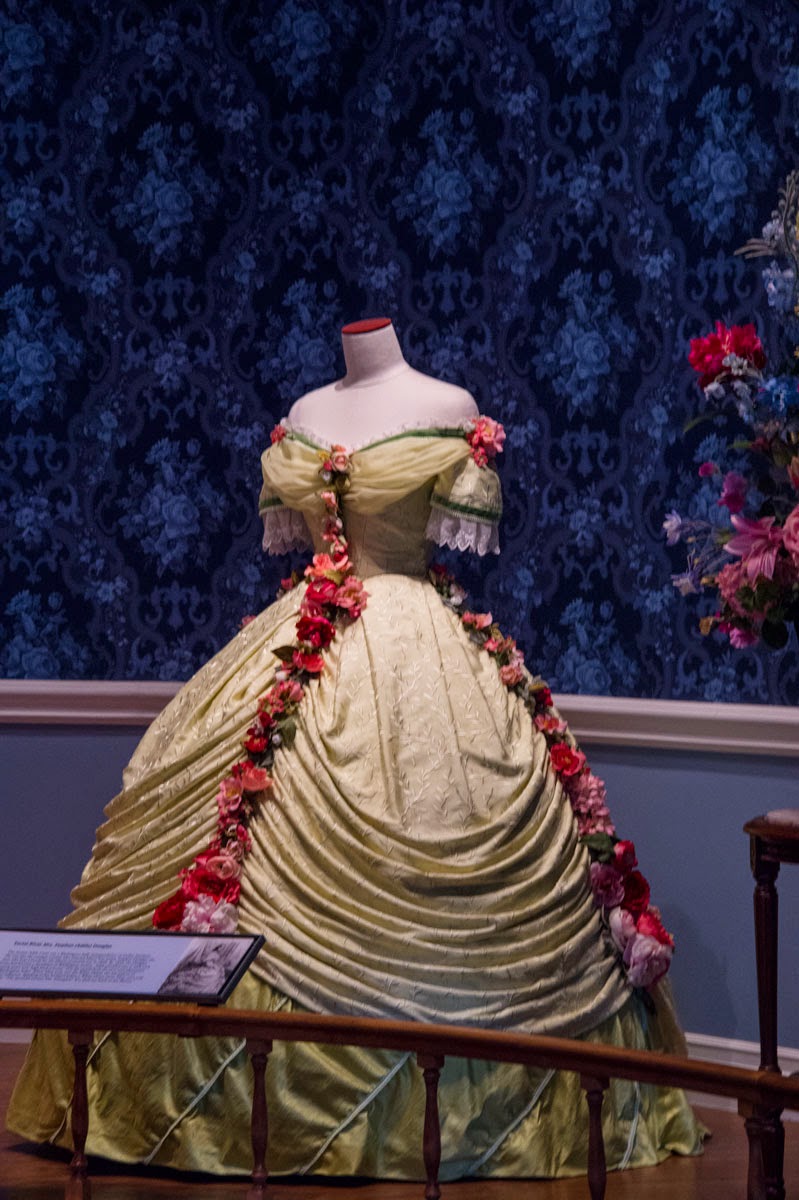 This one was spectacular ... except for the six matching doilies sewn around the top!!  There's SO much history in this building, including many letters written by both Abe and Mary and artifacts from the Presidency and their home. 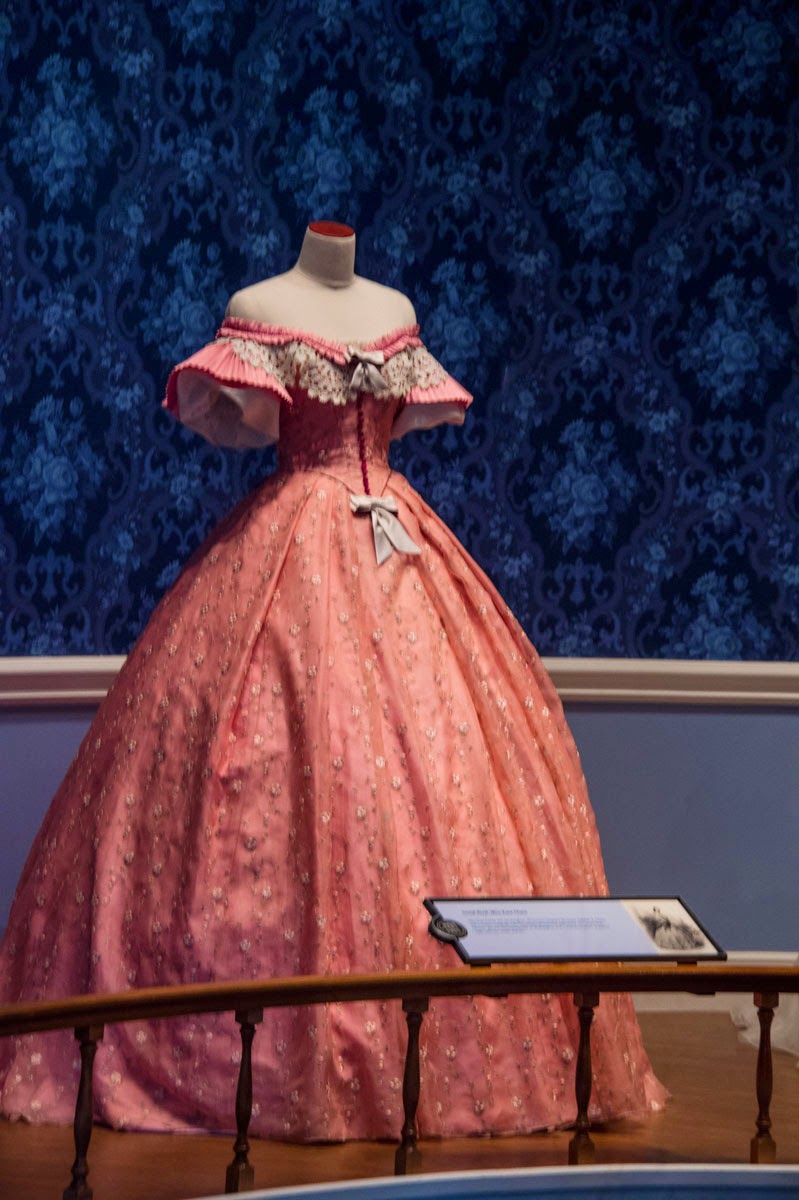 Unfortunately, here's the guy that ended it all.  John Wilkes Booth sneaking around the White House. There are several good theatre shows here which will make you jump out of your seat as you experience the war like you were standing on the battlefield.  One of the remarkable short films shows a four minute review of the battle lines and skirmishes from the Civil War, including the related deaths.  I watched it twice it was so fascinating to see how the lines changed as the war was won by the North.  There is also an exact replica of the Capitol Building where he laid in state.  It was pretty sobering to walk through and wonder what else he might have been capable of.  All in all, a great museum!! 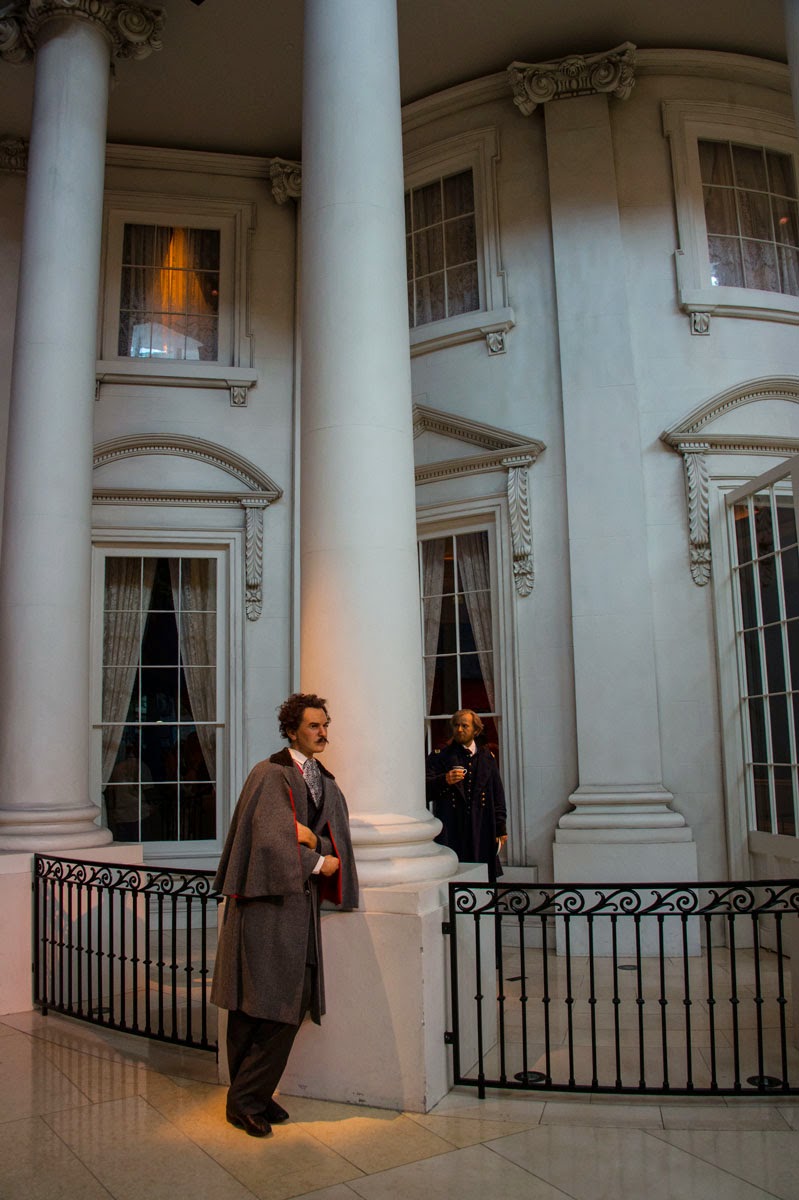 A few blocks away from the museum is the original train station Lincoln left Springfield from as President Elect.  Although now a law office upstairs, inside the front door downstairs is a small museum where you can hear his speech.  Upon his death, he was returned to the same station and buried in Oak Ridge Cemetery. 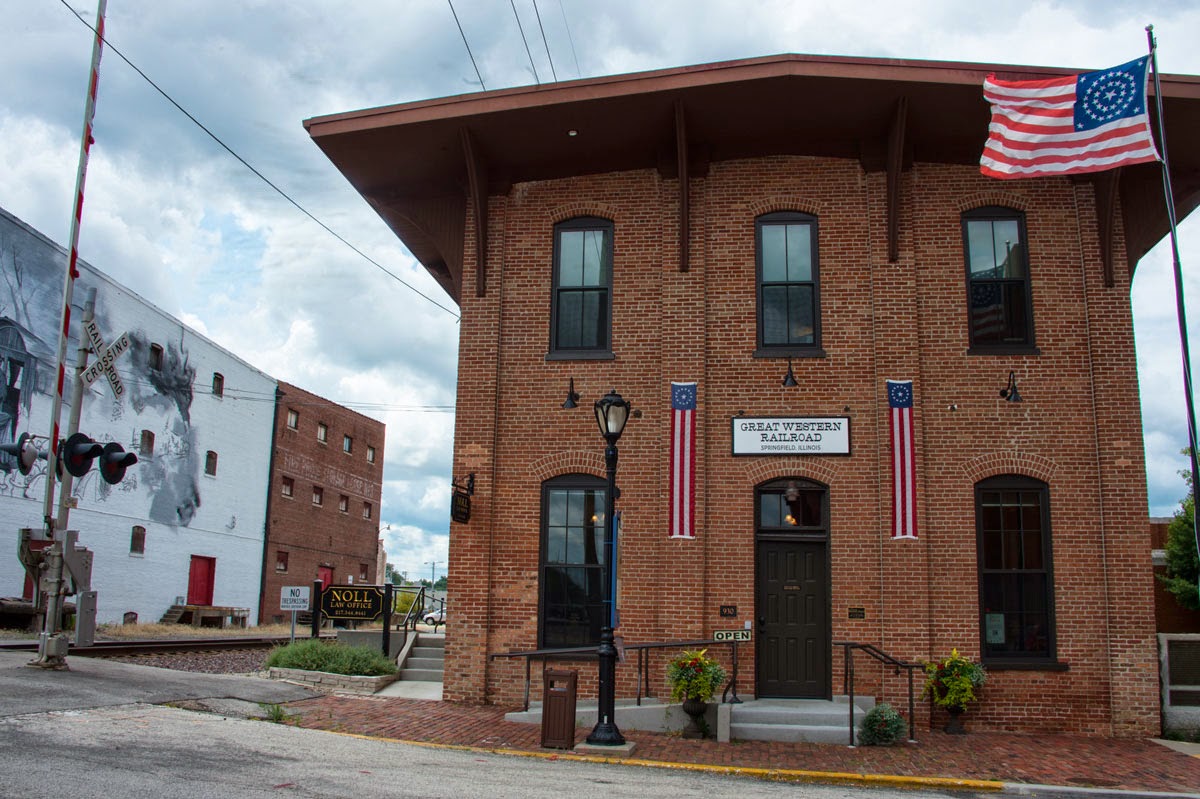 This mural on the building across from the train station looks incomplete ... I'm not sure if that is on purpose or not.  It shows Lincoln giving his departing speech when he left on the Great Western Railroad to Washington. 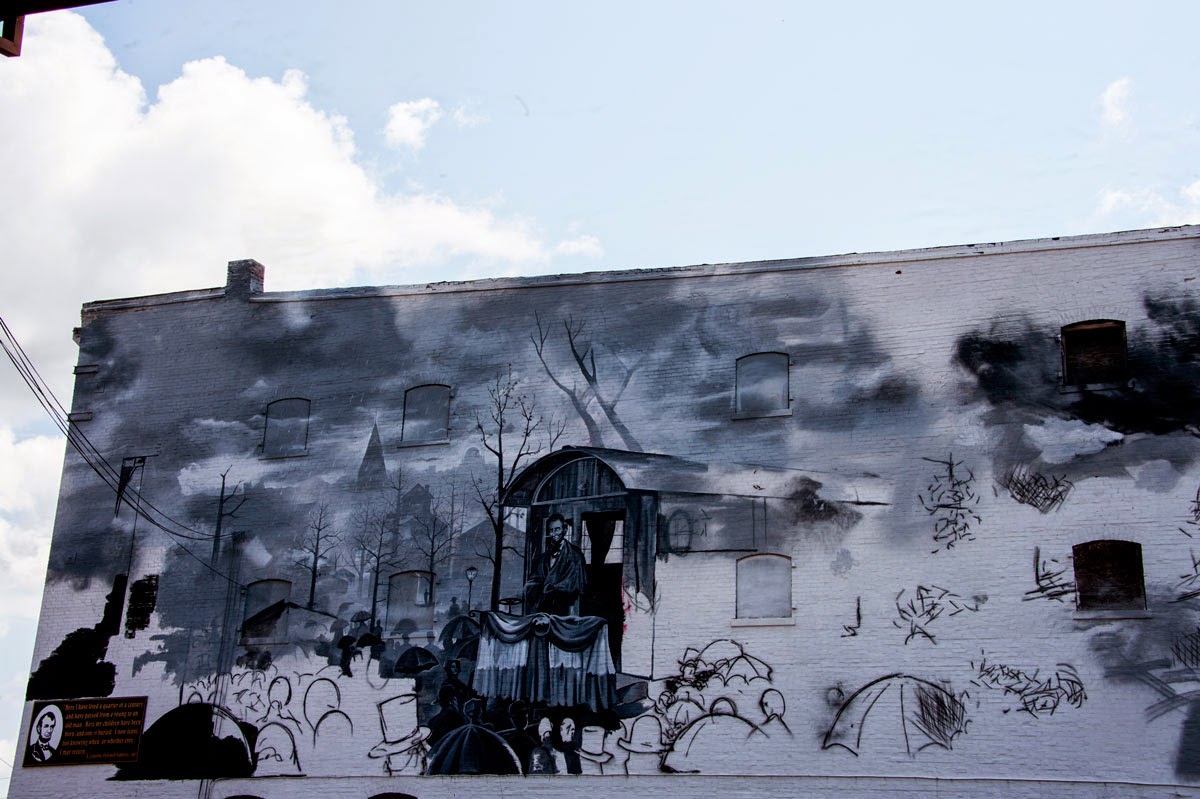 Being President Elect, and hearing rumors of assassination attempts, the railroad sent out a specific Time Card to the stations along the way to be sure there were no other trains on or near the tracks when his Special Train came through town. 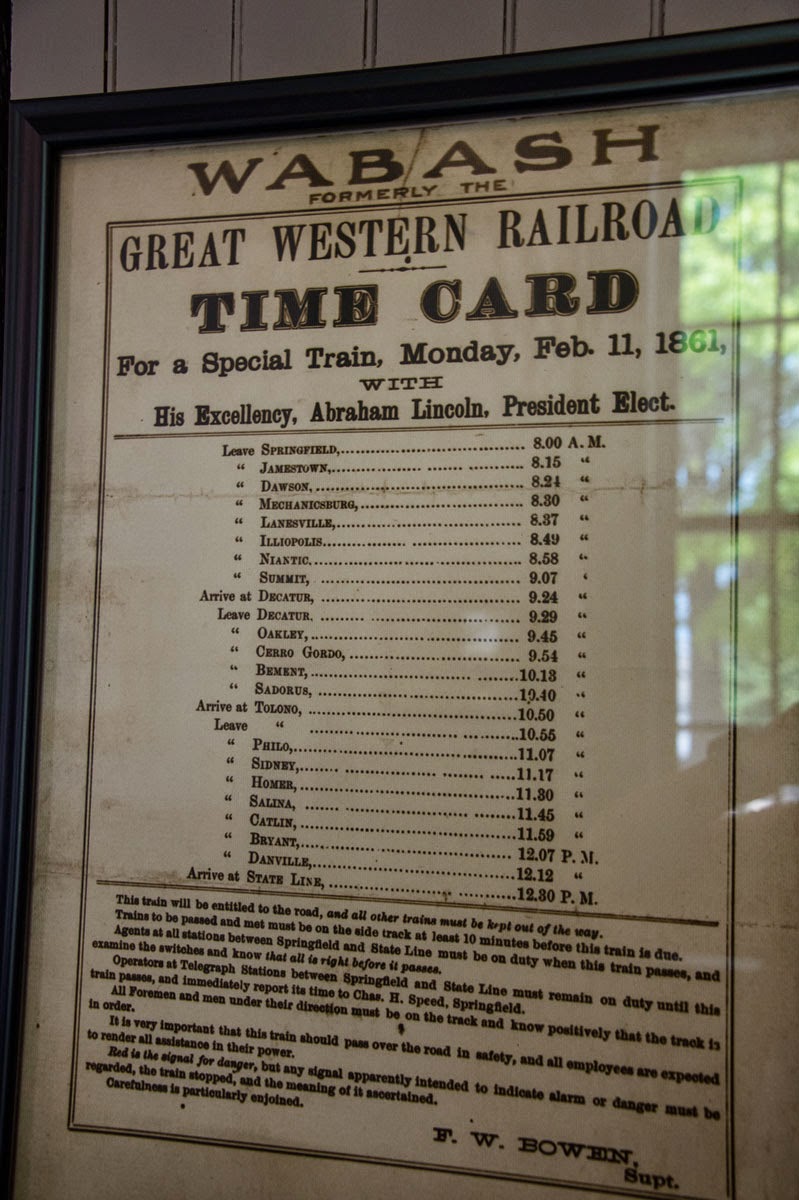 Inside this little museum is a great picture of the family portraits.  Two of the three boys pictured here died from disease, and another in childbirth.  There was lots of sorrow in this family from the beginning to the end.  Mary ended up being institutionalized by her oldest son Robert, due to irrational fears (she tried to jump out of a window because of a non-existent fire) and increased spending on things she never used.  Mary was able to convince the courts she could live with her sister, which she did until her death at age 63.  It has since been  suggested that she suffered from bipolar disorder, which would explain her public outbursts, angry fights with her husband and exhorbitant spending habits. 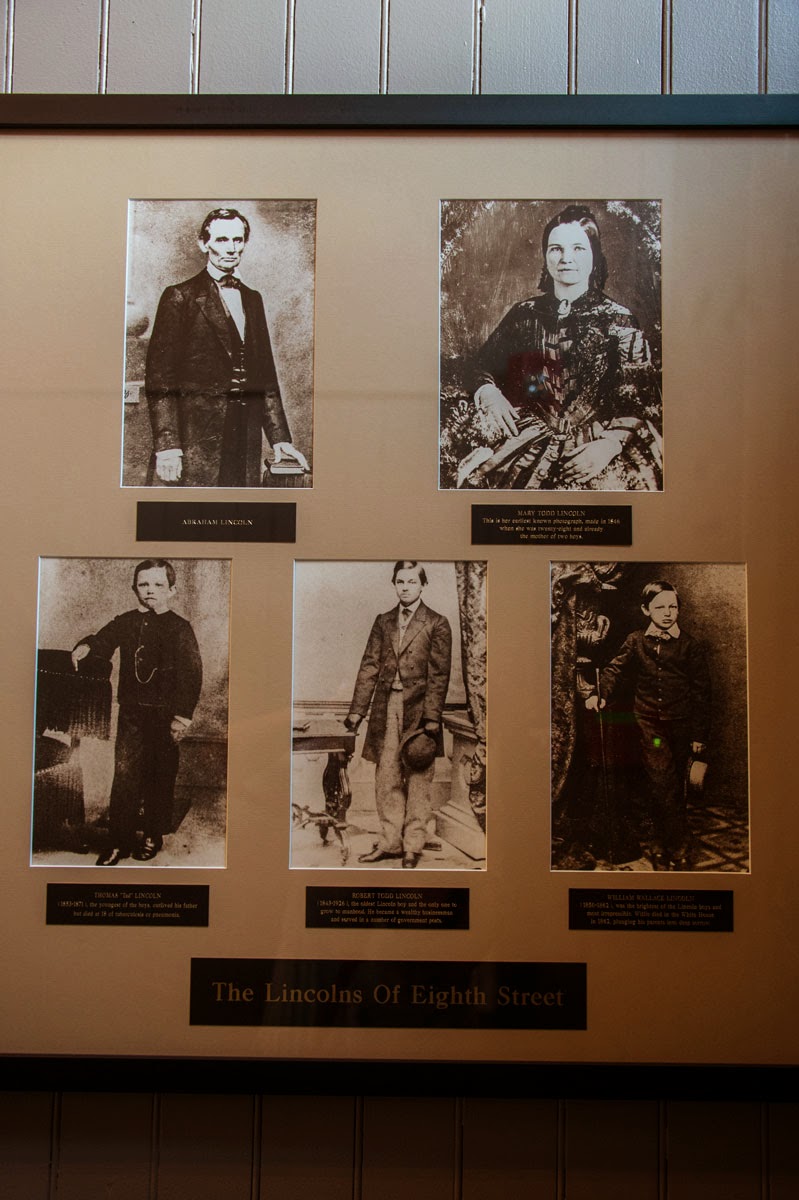 It's now late in the afternoon and we are starving!!  It's an easy decision ... head to Freddy's Steakburger for a huge $4.00 burger, followed up with a turtle frozen custard sundae.  YUM YUM!!! 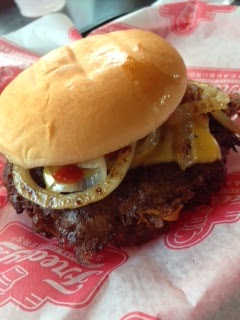 Also at Tom's suggestion, we stopped at Menards ... like Lowes, only bigger  ... for some reflective window coverings.  I'm sure you all know how hot it can get when the sun shines on your huge front window.  With two large sections, it almost covers the entire front area, keeping out the worst of the heat from the sun ... making the air conditioner not have to work quite as hard!!  Great idea Tom!!!

One more day here in Springfield and we will again head North .....
Posted by Nancy Kissack at 6:18 AM