On our third trip to Grant's Farm, we finally hit pay dirt!!  Not only were they open, but we were early enough to get a great parking spot and miss most of the crowds.  Meet Bud, an elder statesman who resides here.  Not often do you see a male African Elephant and he stands well over ten feet all. 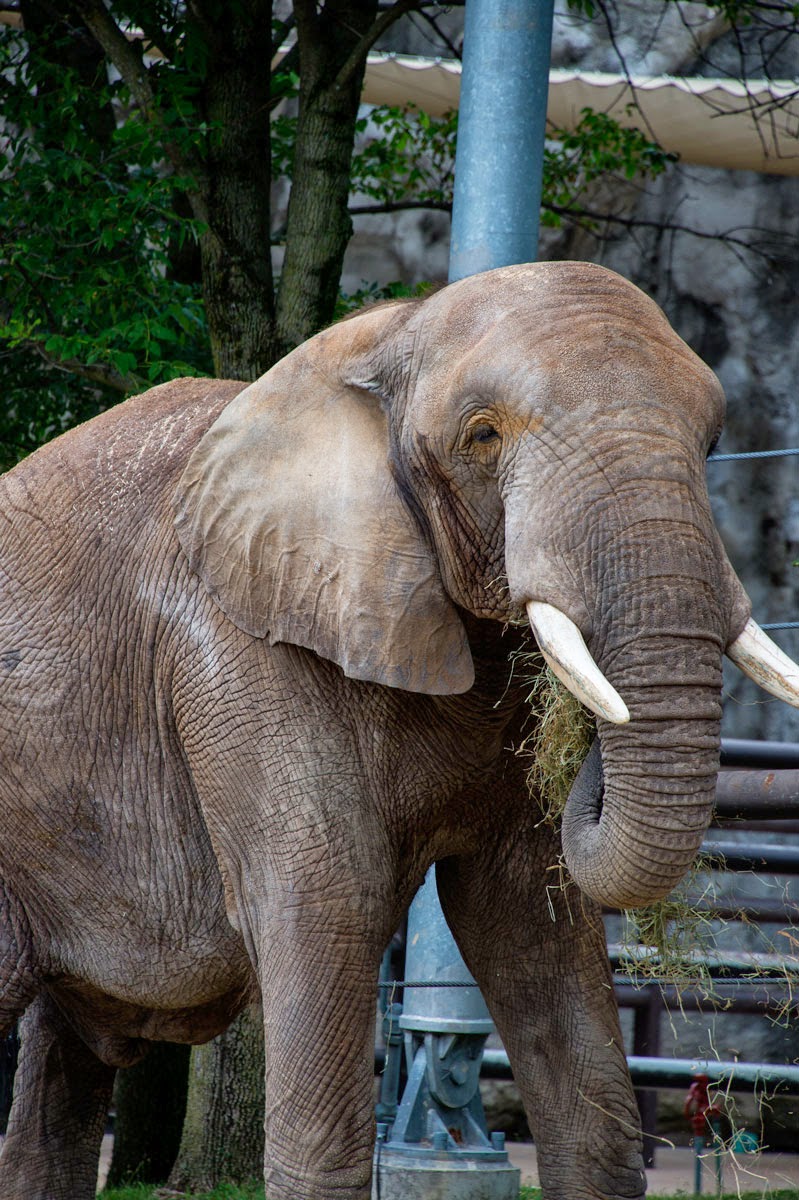 With the help of small pieces of his favorite veges, Bud does a few "tricks" that are designed to keep him limber and moving, sort of like us old folks.  He proved he has a mind of his own however, when he refused to bow a second time.  Once was enough he said!! 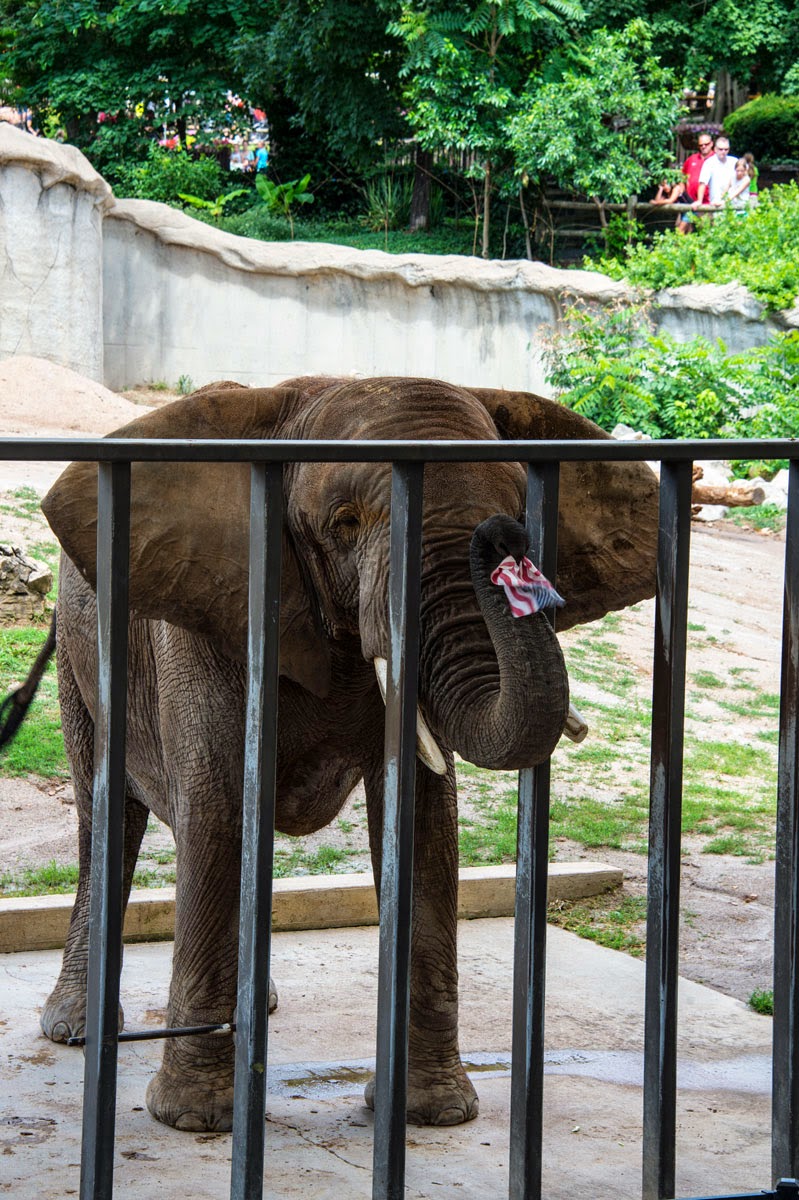 He showed us his pearly whites as the trainer threw sweet potatoes in his mouth and grabbed a ball from the top of a 20+ foot tall pole.  Bud can definitely reach the cans on the top shelf!! 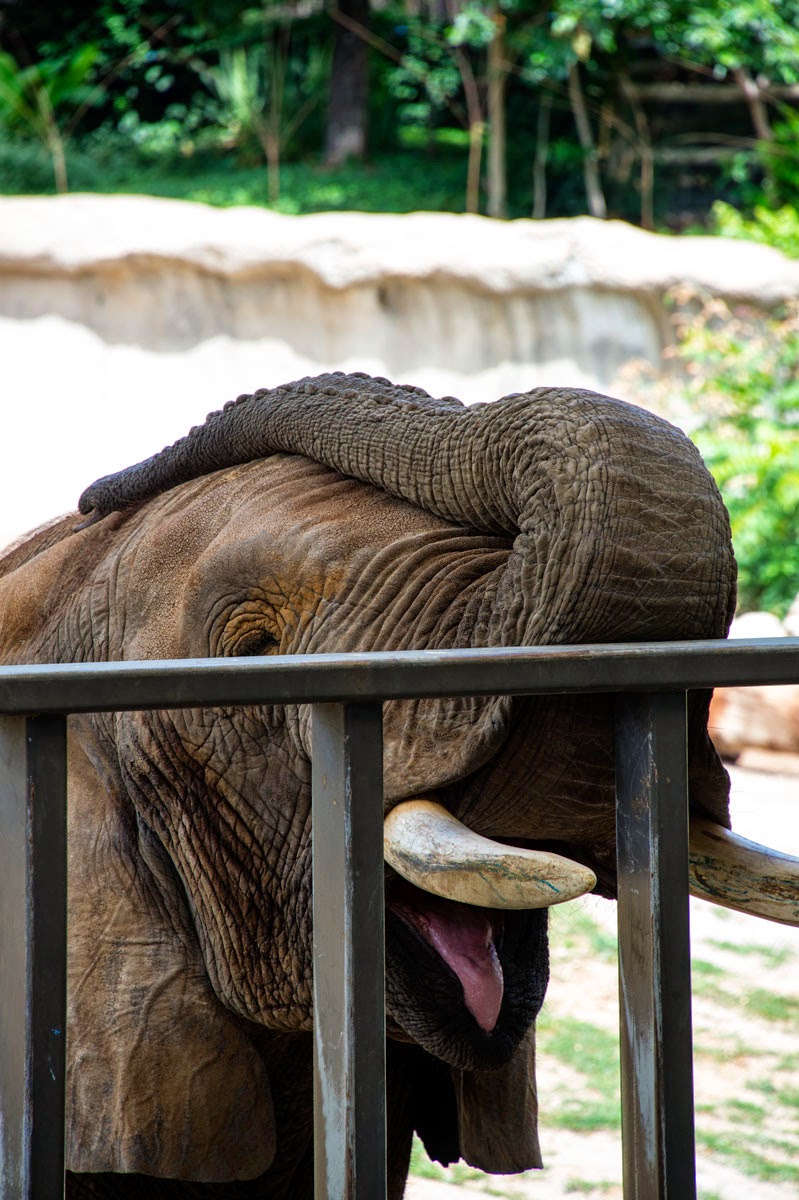 This farm really is a must see.  Once owned by U. S. President Ulysses Grant who built this cabin, it was owned by the Anheuser-Busch Brewing Company for years, who sold it to InBev in 2008, whoever that is.  Admission is free, but parking is $12.00. 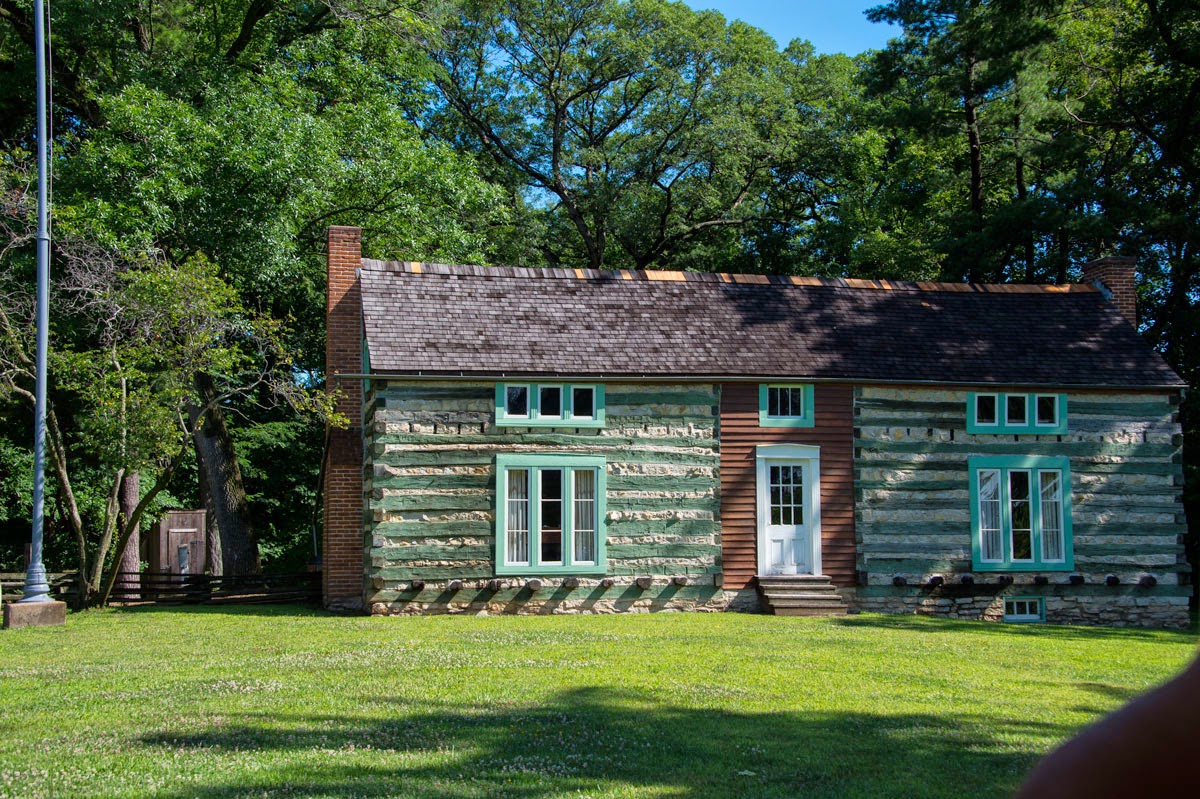 Upon arrival, you can either hit the General Store or climb on the tram which takes you around the farm, giving you a chance to see the bison, different types of cattle and deer, along with camels, peacocks and donkeys. 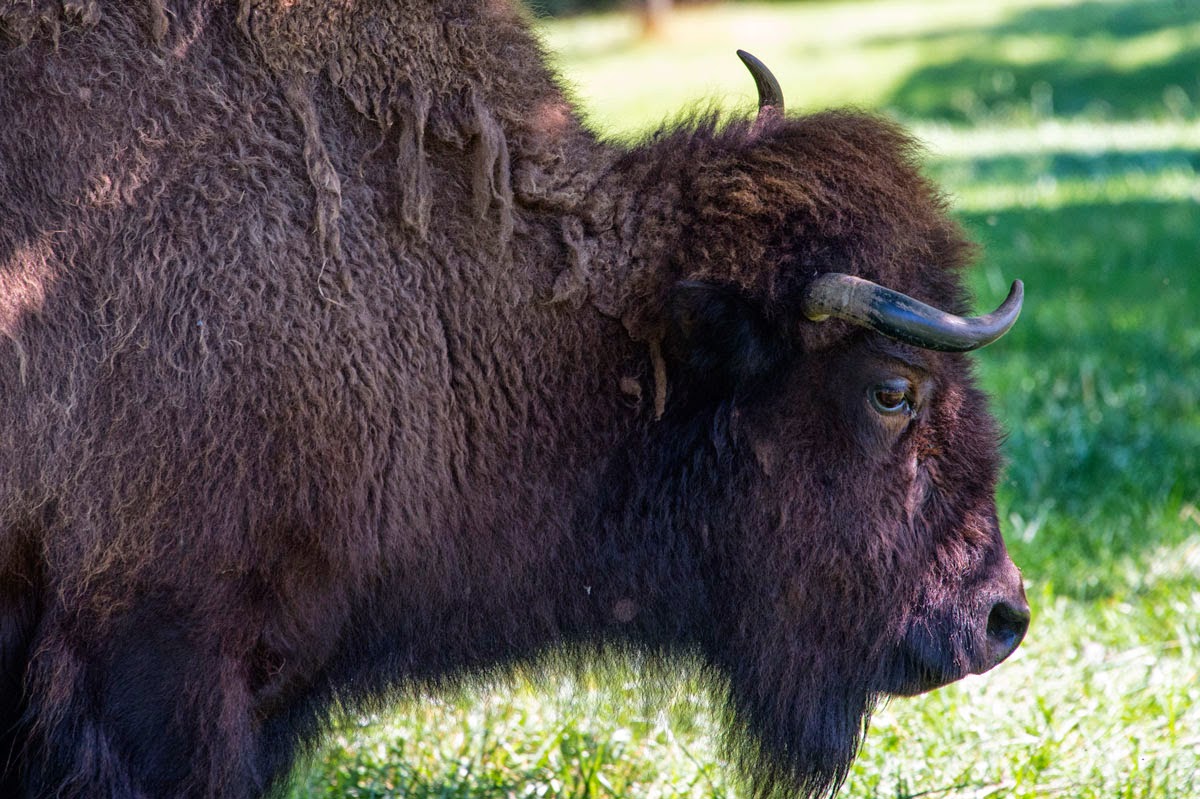 As soon as we drove up, the bison moved en masse to the front of the tram and weren't much interested in getting out of the way.  It was a nice herd with several babies born on the property. 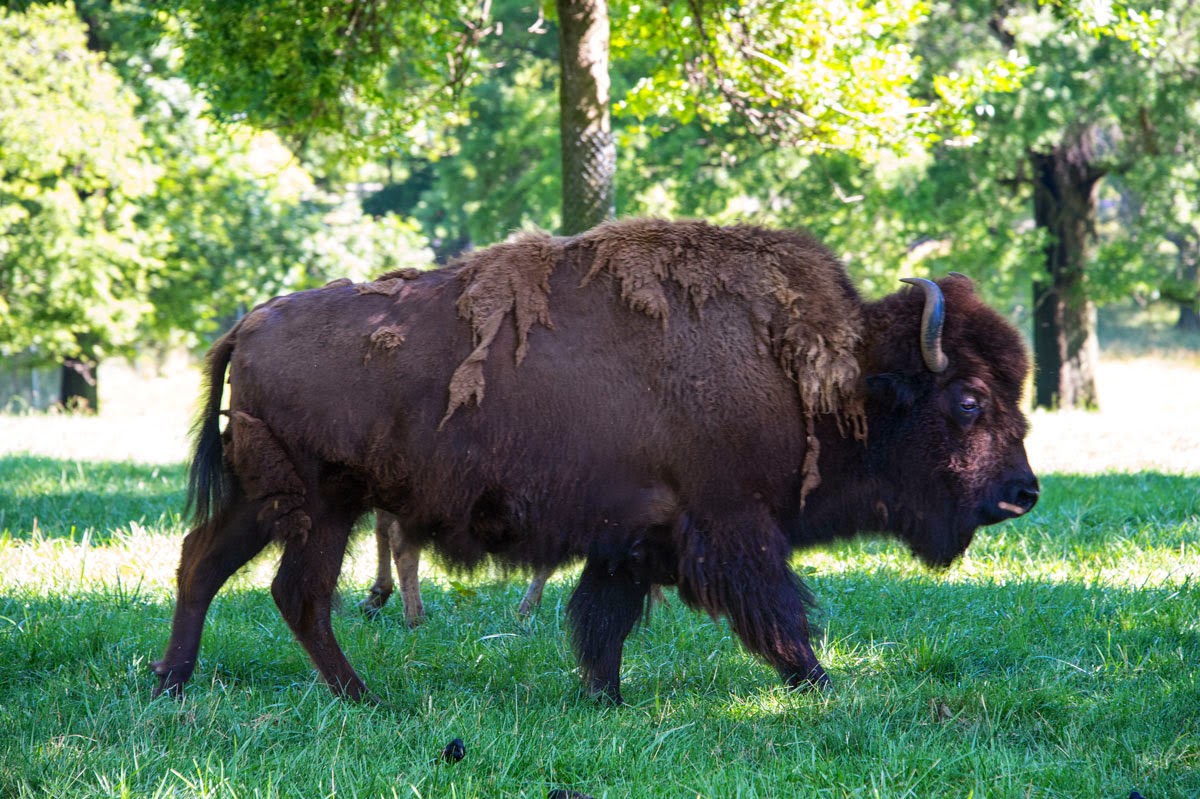 Once dropped off at the main park, you can feed a bottle of milk to the baby goats, which for obvious reasons was a GREAT hit with the kids ... no pun intended!! 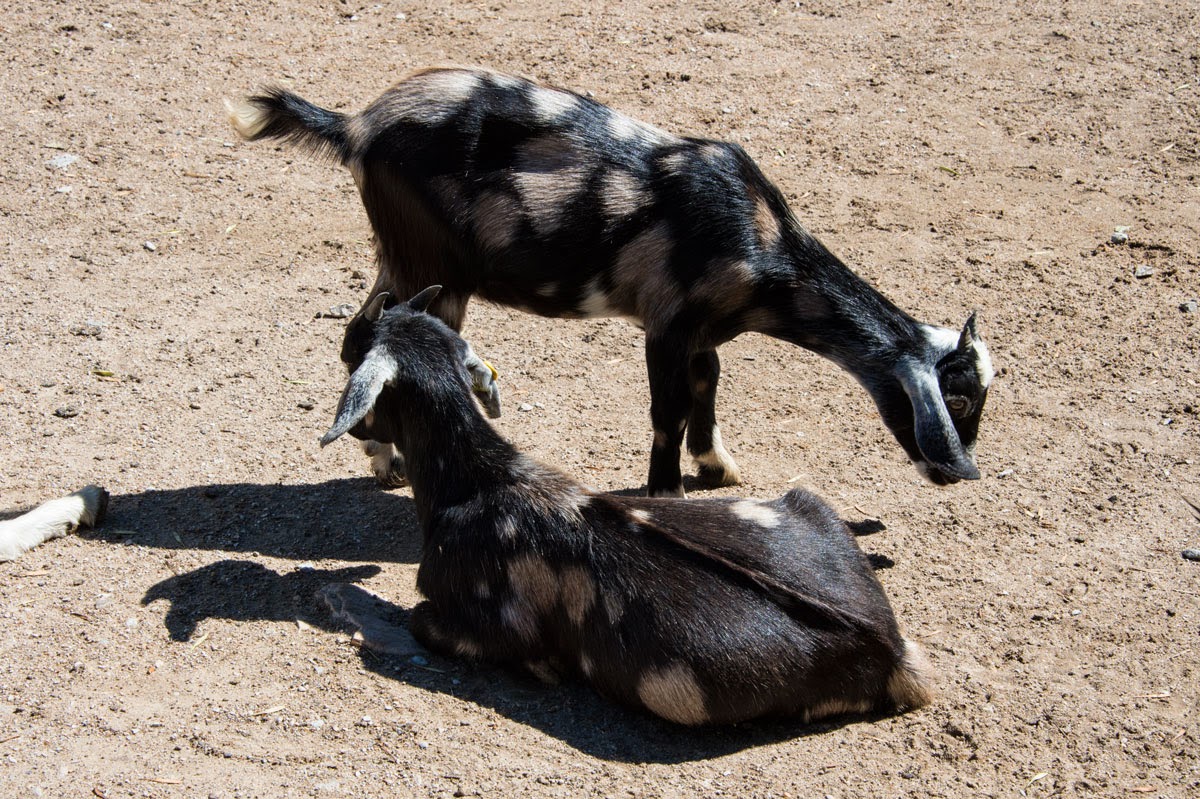 A face only a mother could love ... this long-haired guinea pig joined several others for breakfast on the lawn. 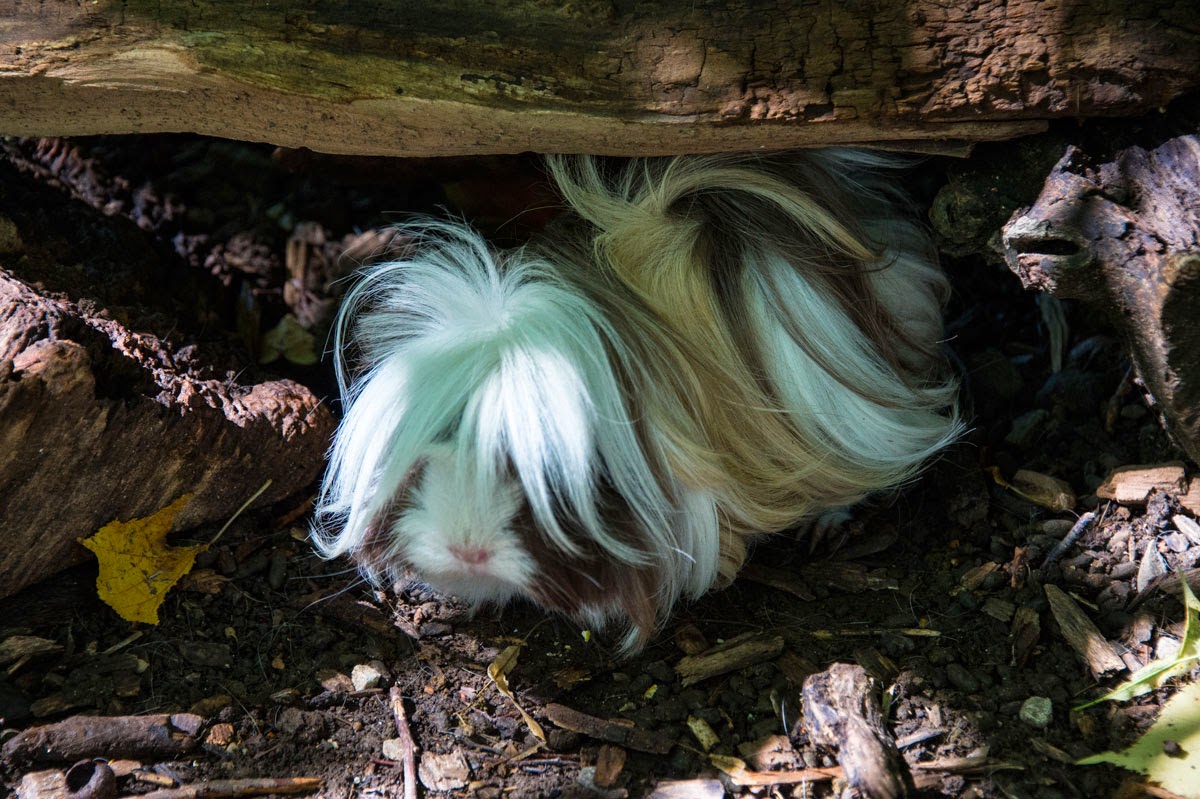 These were the most active tortoises I've seen ... probably heading to the fence where tourists fed them popcorn ... which you are NOT supposed to do.  Several were cruising around the compound at breakneck speed!! 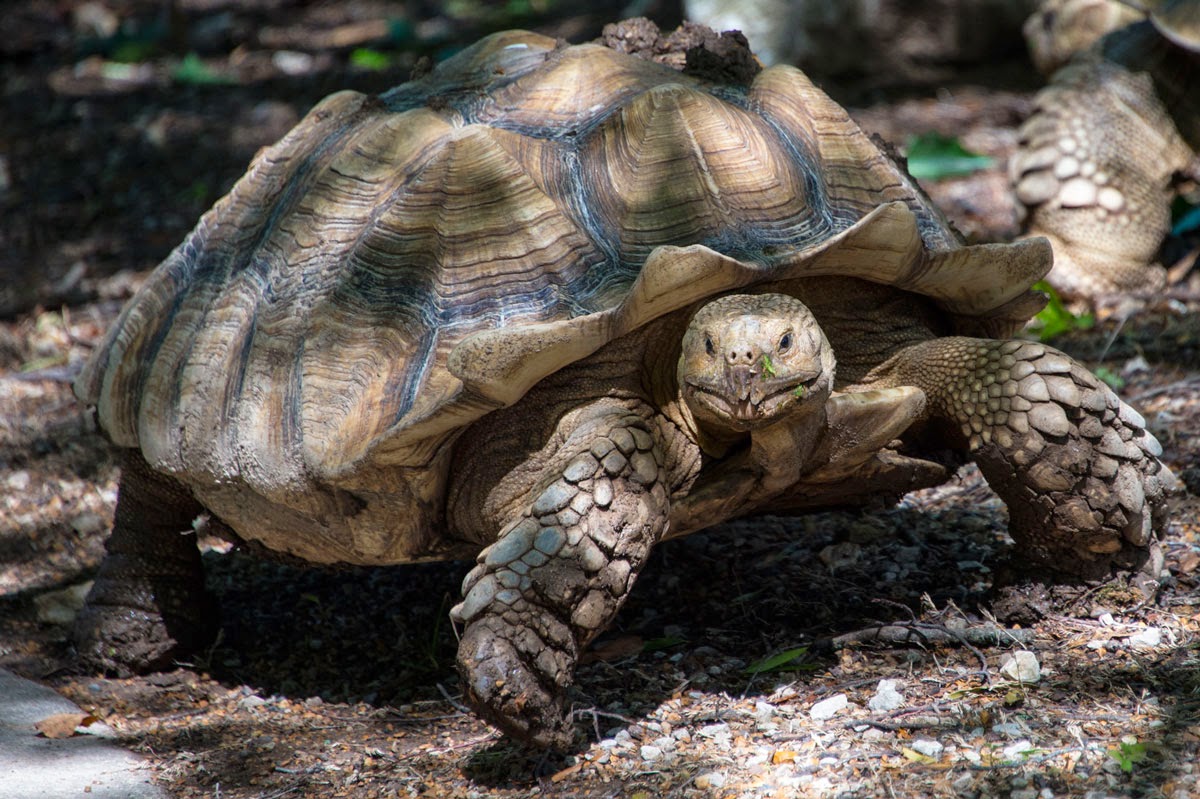 They do have an animal encounter show which included a large yellow python, several birds of prey, two rats who run a race and this gorgeous macaw. 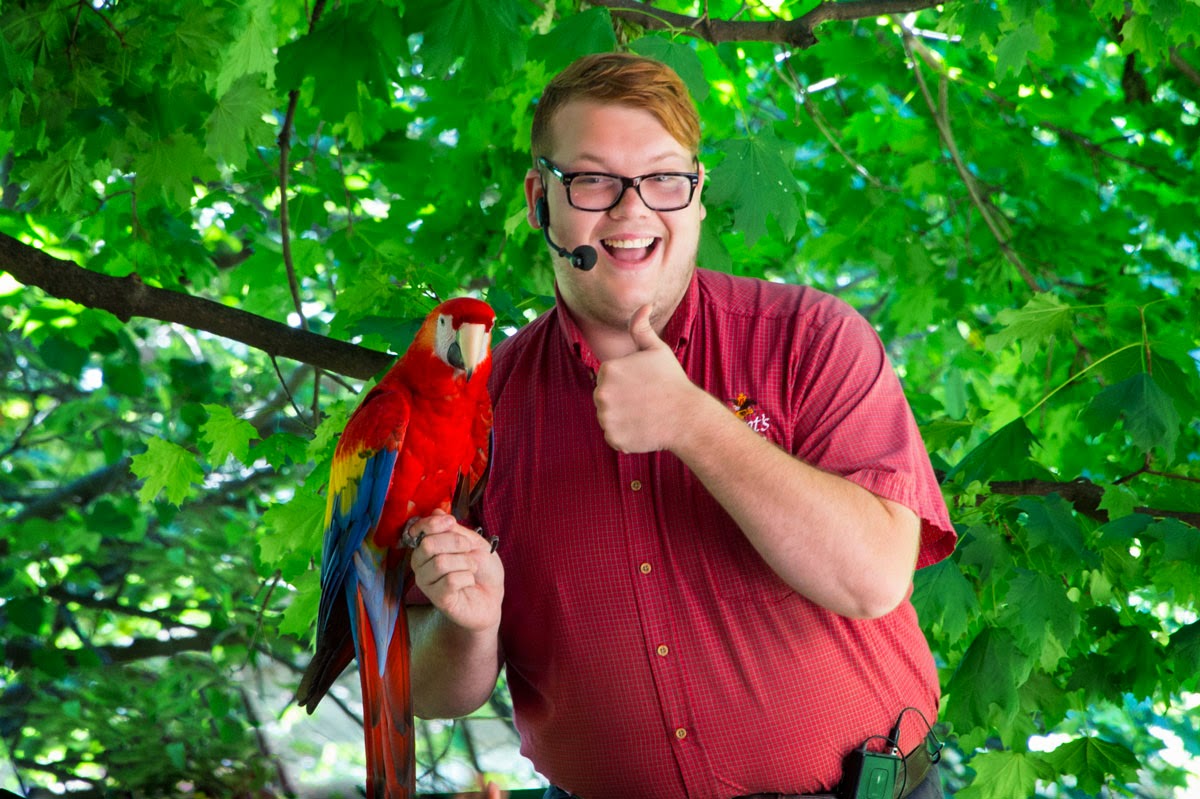 Along with a hawk, this barn owl flew for fuel ... little chunks of meat for breakfast. 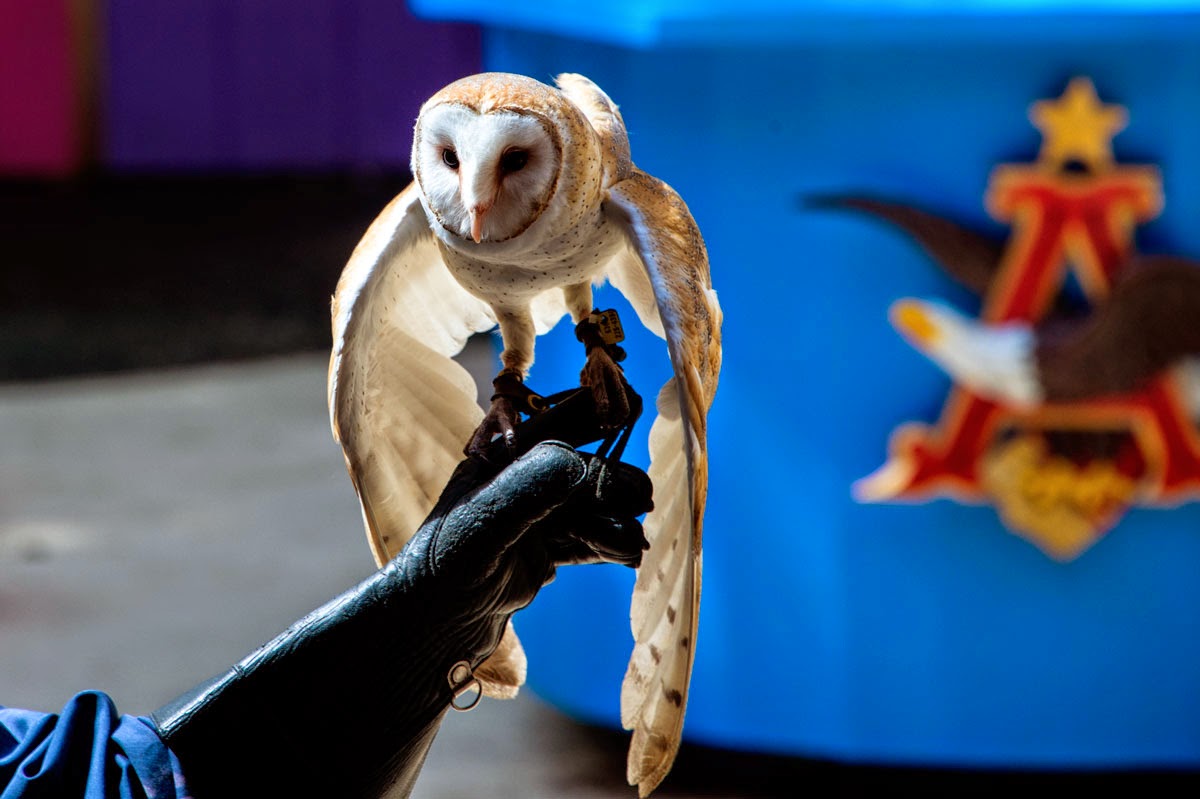 They had a small hedgehog and it's big brother, a porcupine.  There were some major quills on this baby!!! 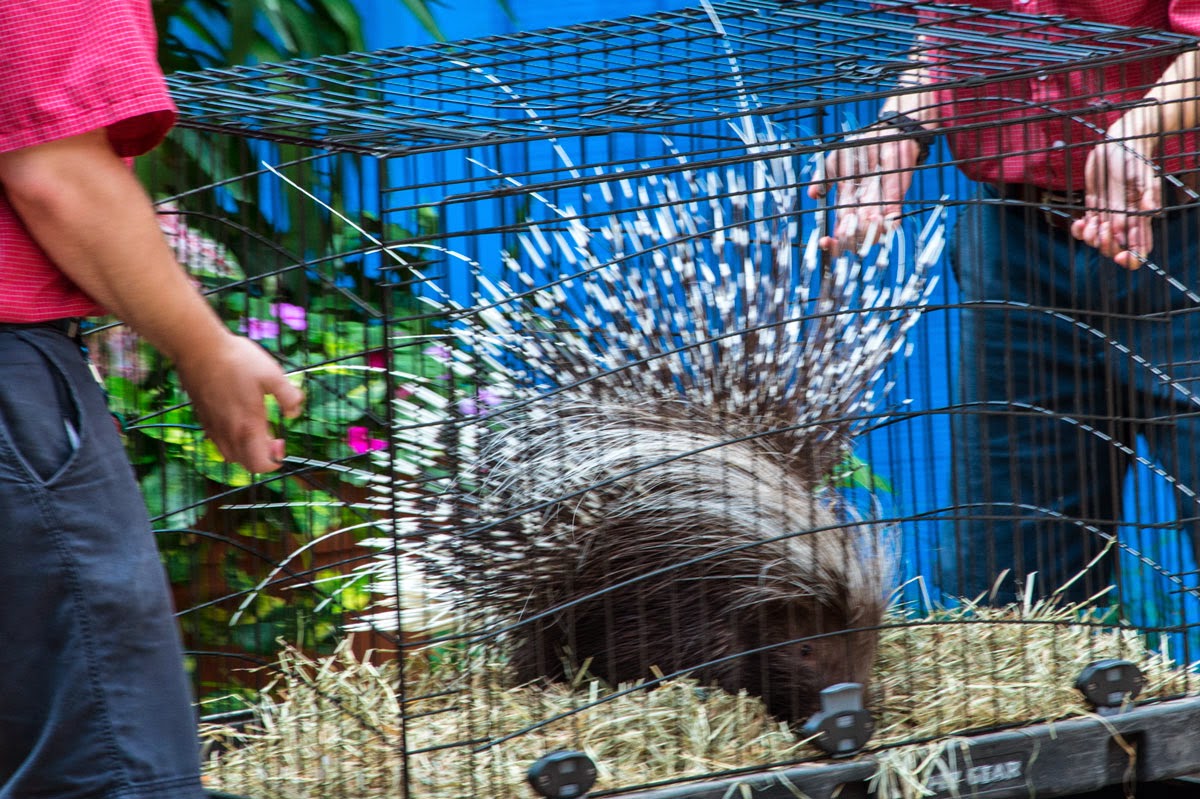 The last performer was this majestic Bald Eagle who didn't perform at all.  He didn't have to.  All he had to do was sit there and be his regal self!!! 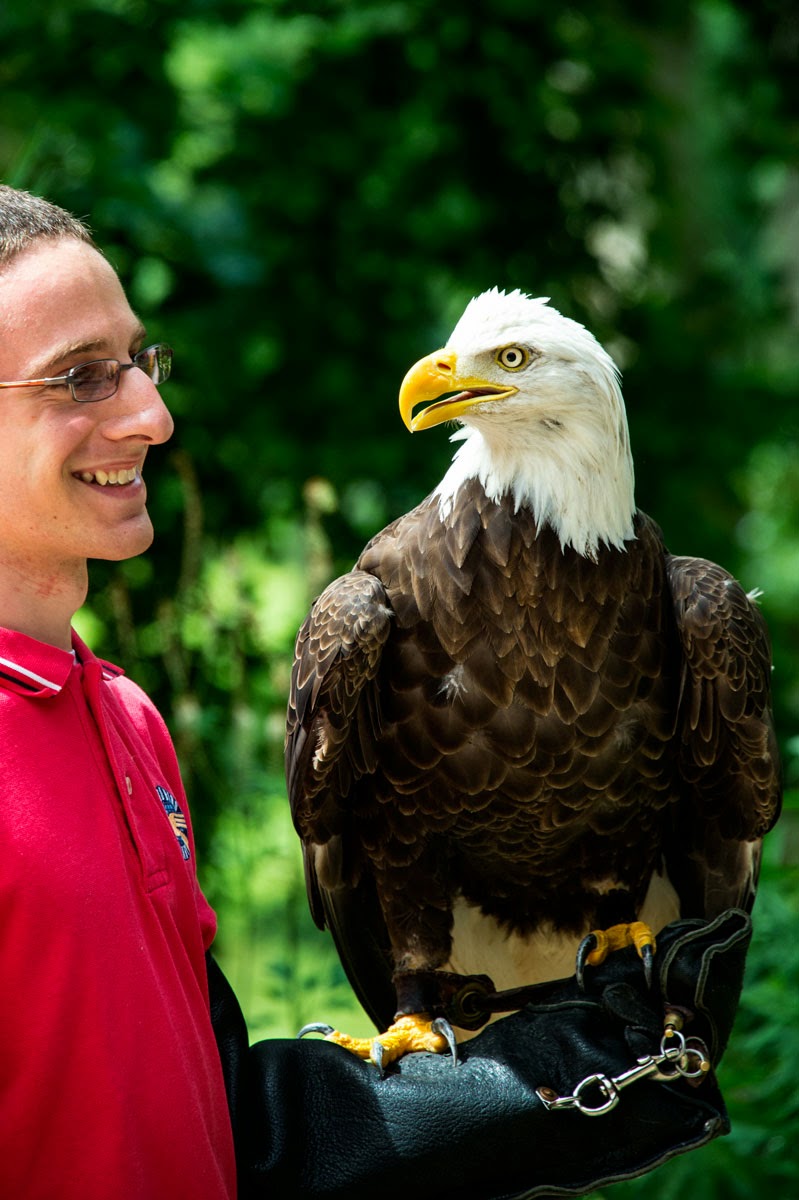 What a beautiful bird ... the eyes are just riveting!! 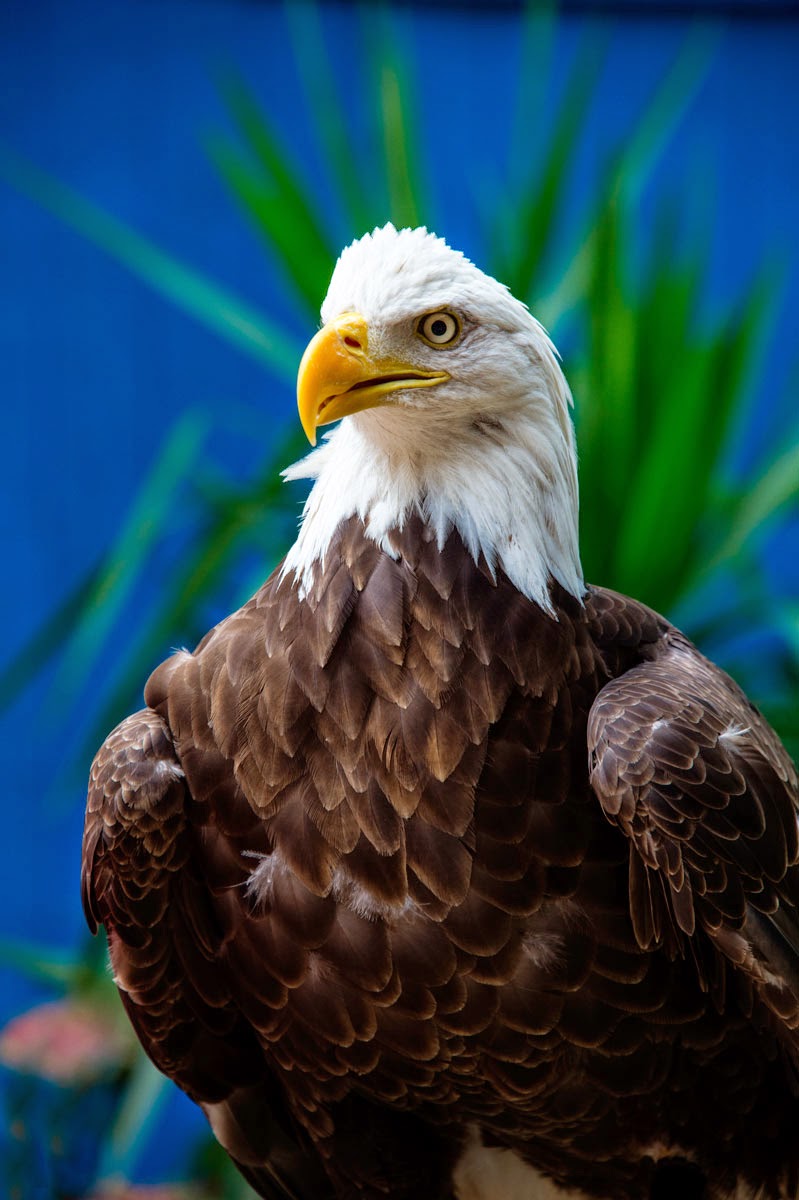 I sure wish I had my own eagle .... but WAIT!!!  I do have my own!!!  On the way in to the General Store, you were greeted by this baby sitting on top of the shelves ... the symbol of Anheuser-Busch!!  After thinking about it for all of 30 seconds, I HAD to have him sitting on my dash.  When I told the lady I wanted to purchase it, she said "are you serious"?????  At about four feet tall, he fits on the dash perfectly ... the reflection of the clouds makes it look like he's going to take off!!!  Who in Indio will have THIS on their dash?????  Maybe I can get a flag for his beak ... or one to put under his claws!! 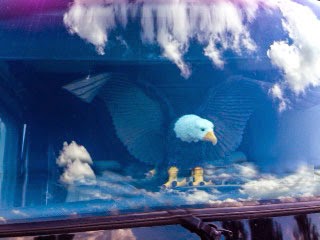 Right across the street from Grant's Farm is one of the small Anheuser-Busch clydesdale facilities.  It didn't take me long to made a mad dash here!! 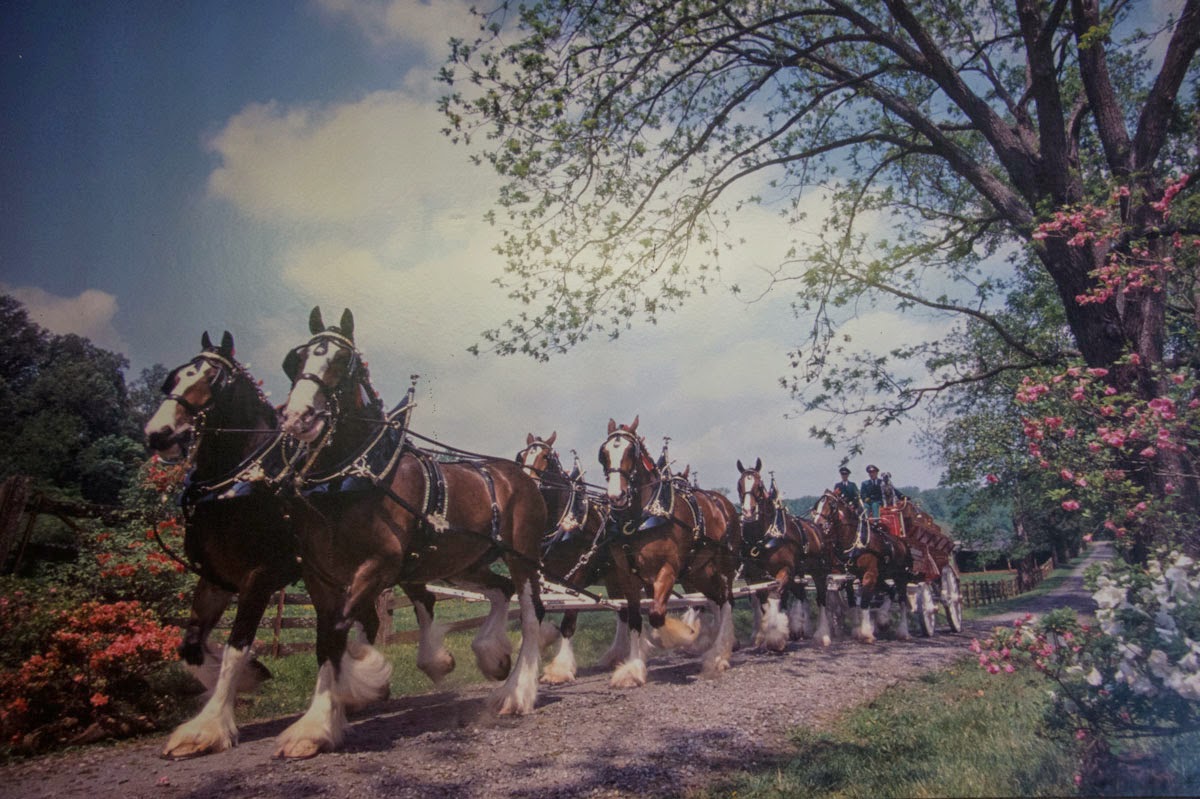 Nice horse trailer, right??  Air ride, air conditioned ... my horses would have loved this!!  I don't think they use this facility other than for the public to get a glimpse of these amazing babies!! 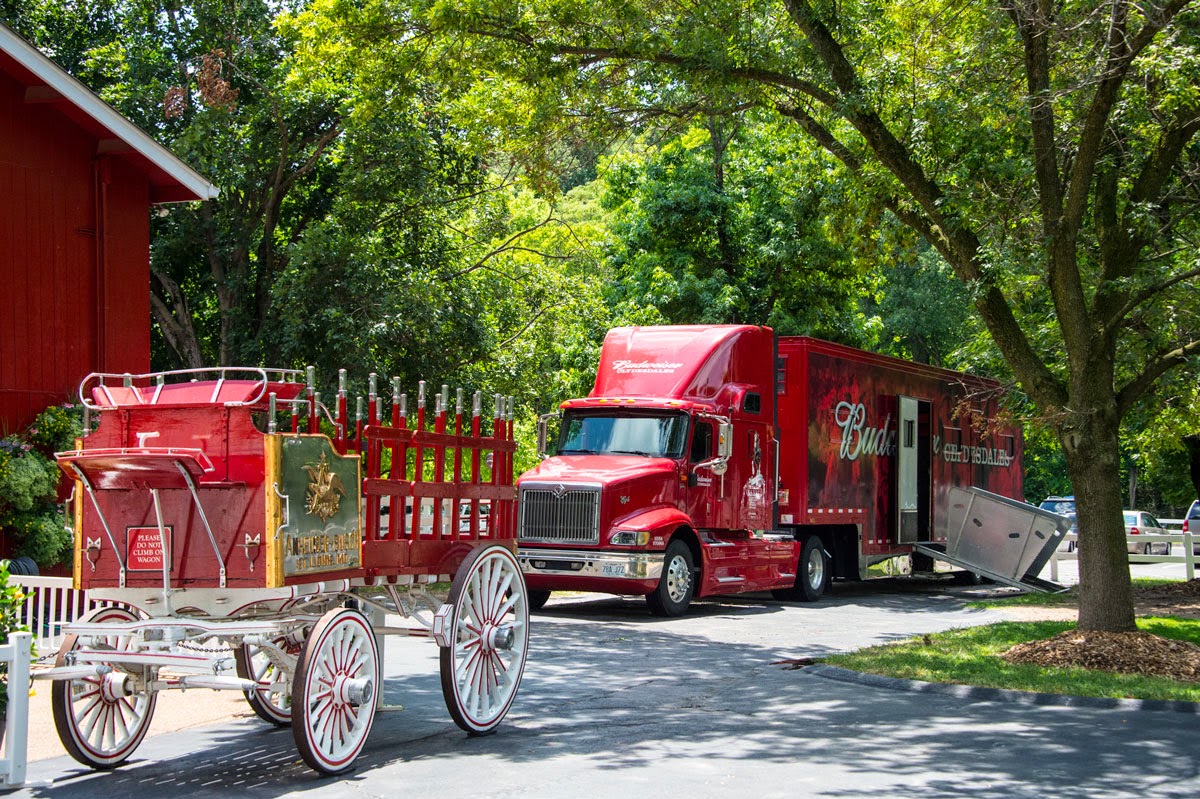 There was a barn with maybe three horses and corrals with another 5 or 6 outside.  They transport these horses over 30,000 miles a year and this serves as a nice hotel when they are on the road. 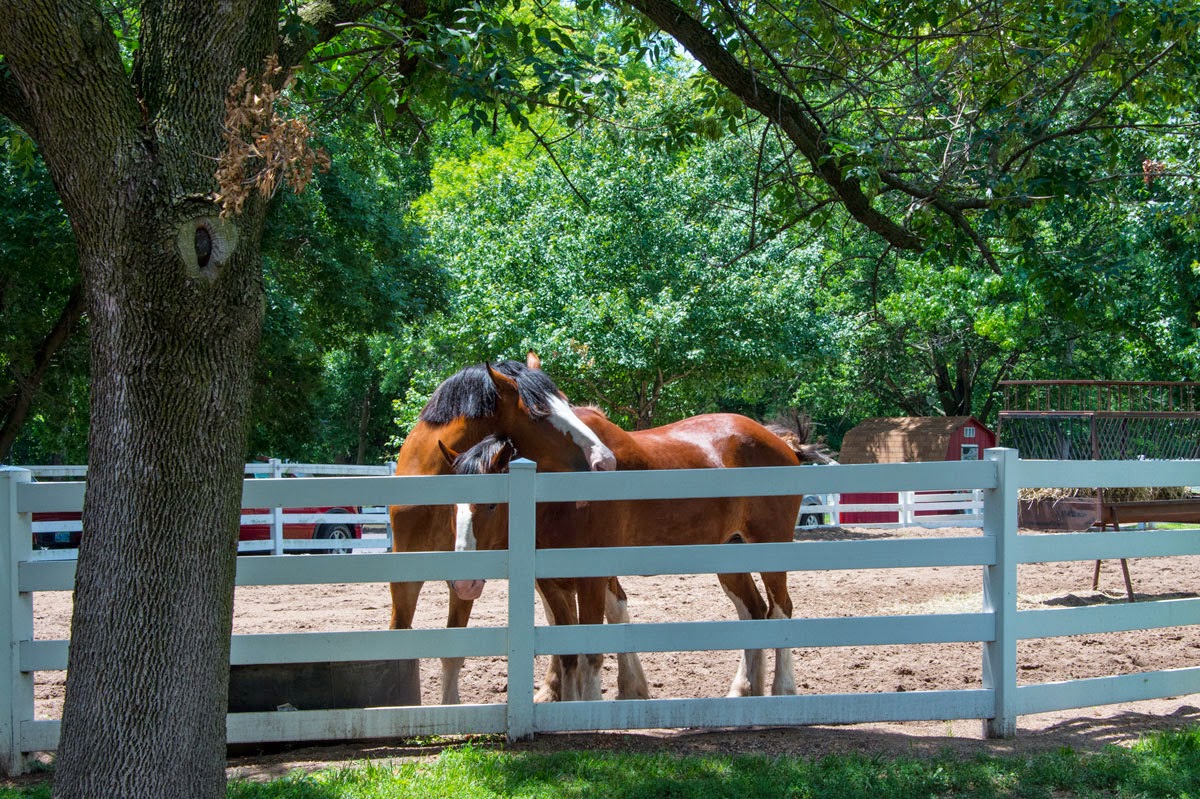 You can go in the small barn and have your picture taken standing next to one of the older boys, or you can wander a short distance where we found this yearling about to fall asleep on the fence.  To be able to join the traveling troops, they are required to be bays (all brown coat with black mane and tails), have a large white blaze on the face and of course long feathers on all fours. 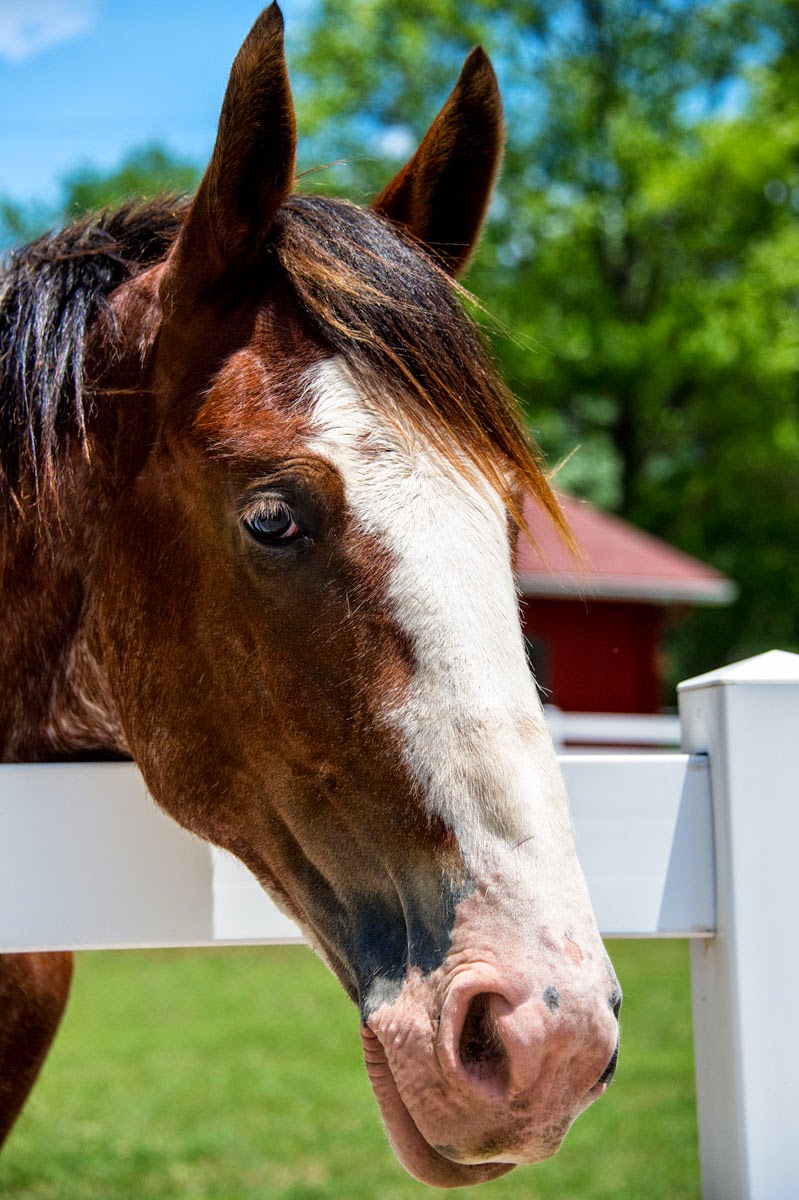 What a great morning THAT was!  We're headed further North, in between storms, to Edwardsville, up Highway 55.  As we crossed the bridge we were parked next to, you can see the Mississippi is on the rise and peaking the top of the banks here.  By Thursday it will flood this area, as it is now doing just North of here. 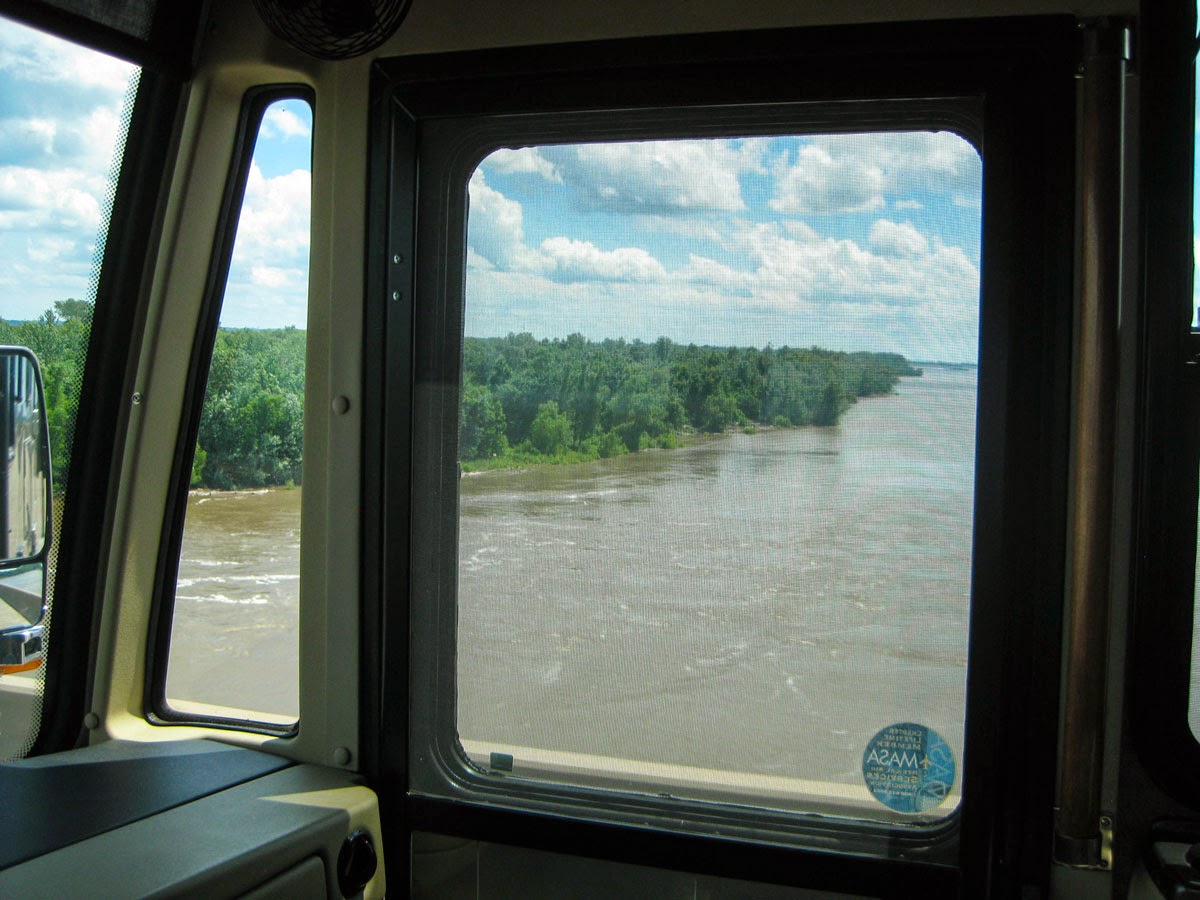 As soon as you cross the river, you are in Illinois ... another state to chalk off my list!!  It was a short drive to the Red Barn Rendezvous RV park where $35 a night will get you full hookup (with good power) in long gravel pull-through sites.  We are sitting in the midst of mile high corn fields. 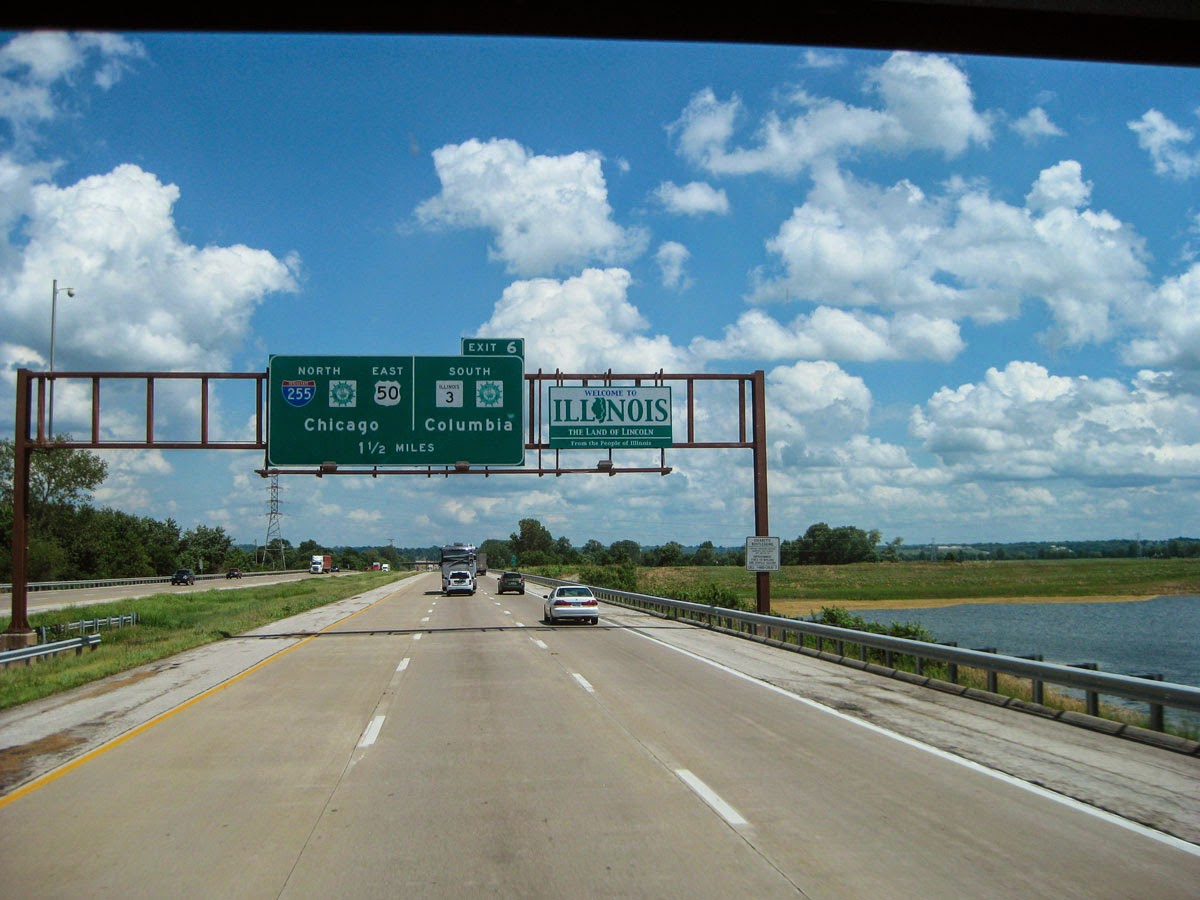 Dinner was at Boogies Bar and Grill in Maryville.  Just look for the metal palm trees!!  The bar was noisy, the waitress excellent and the food way above the "good" scale!! 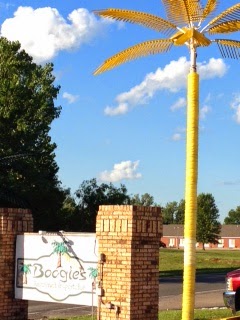 Course, being in Maryville, we HAD to visit Bobby's again for Tom's favorite turtle frozen custard sundae.  I have to admit I'm right behind him ... this stuff is yummy and not to be missed!! 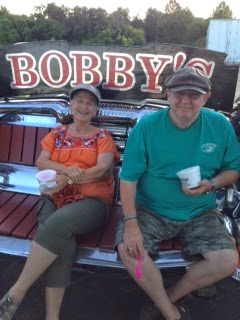 With (finally) a good night's sleep under my belt, we're all set to see some museums today.  Since we're plugged in to 50 amp and my power seems to be holding, my generator will get a rest day as we skirt around the flooded areas checking out the sights!!