I'm lucky to be alive after tempting fate and riding to the top of the St. Louis Arch, actually called the Jefferson National Expansion Monument ... and another RV lesson learned the hard way.  First,  I thought you might be able to ride to the top of the arch, but wasn't going to ask how.  About the time I bought tickets with Barbara and Tom, I finally asked if it was an elevator.  Well sort of she says ..... and rushed me off to the Levee Mercantile store where I became fully immersed in all things pioneer. 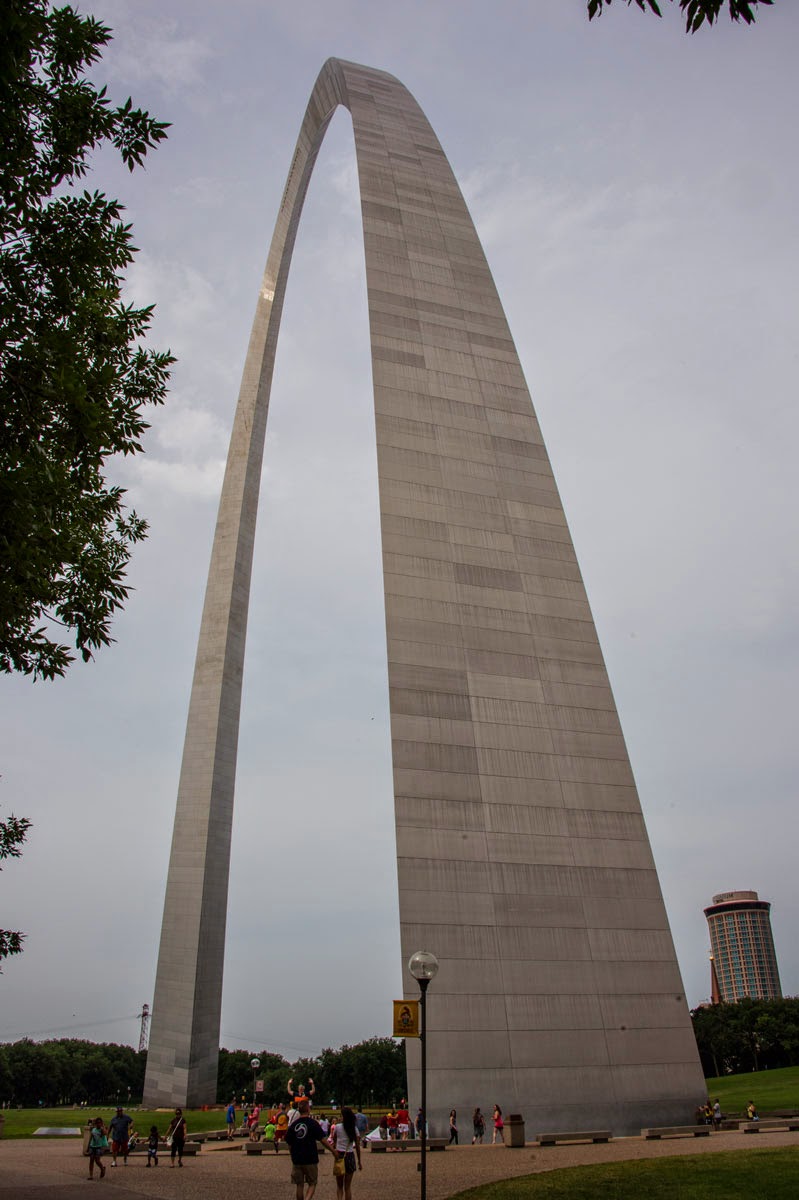 The movie about the construction of this behemoth was amazing.  I didn't see one single safety belt and wished that crane operator worked for me.  This is a MUST see before you go up.  For the weak of heart, it shows just how strong it is built. 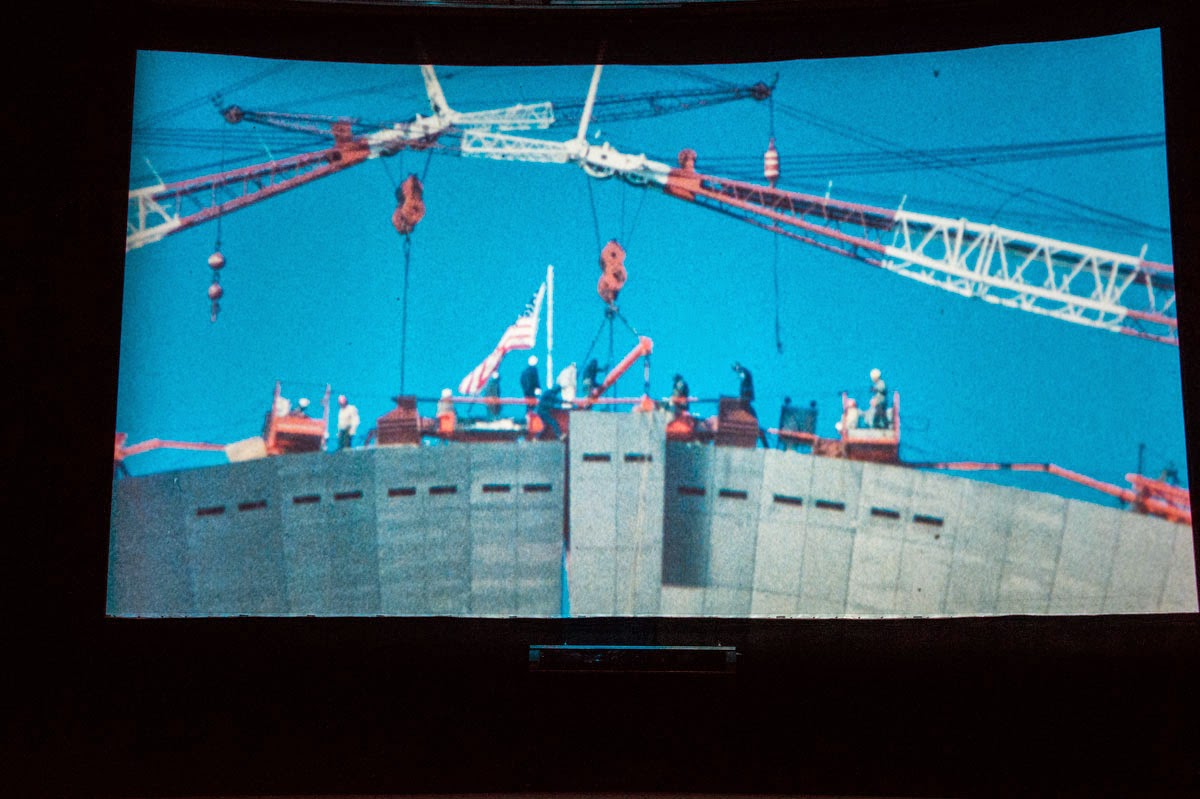 I had an inkling of what was to come when I saw this yellow can with a door about four feet tall.  I was about to ask if that's what we rode up in when we rushed off to the Museum Store on the other side of the underground building.  THAT's when it dawned on me that this WAS our vehicle of ascent ... not the elevator I was hoping for!!!  My oh my oh MY!!! 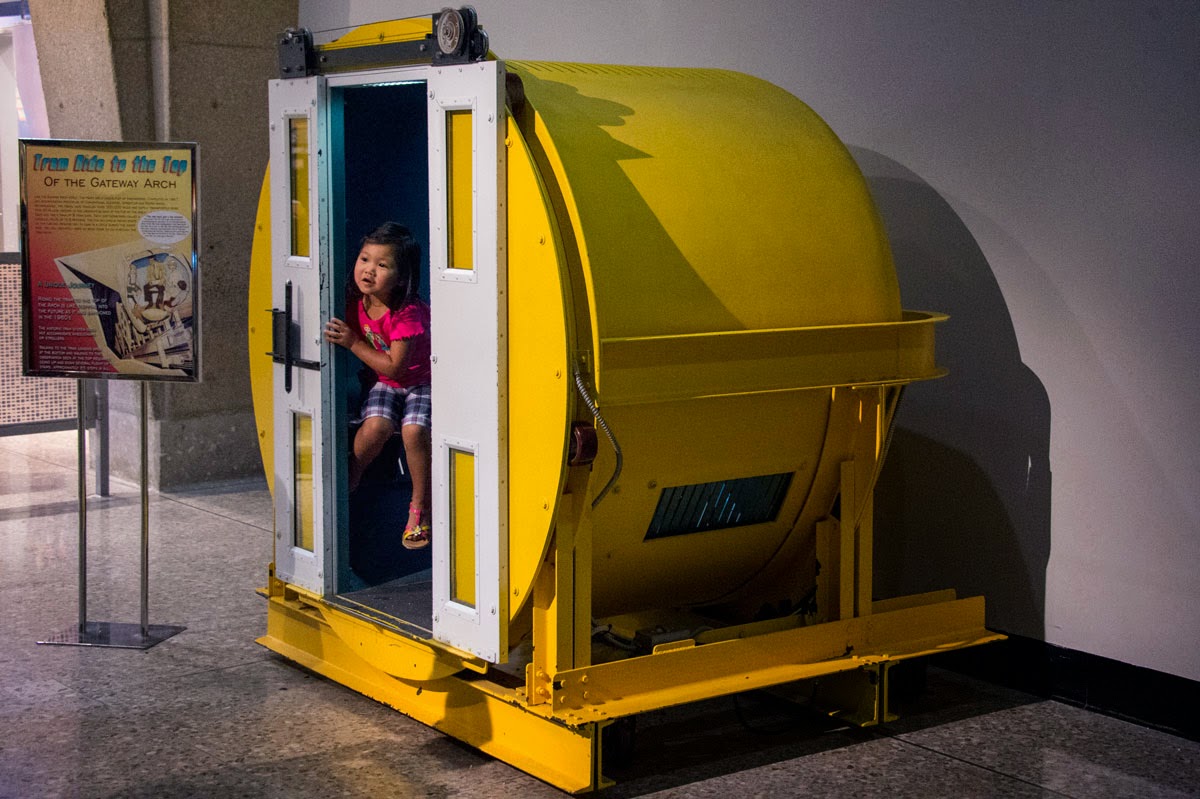 Now in line waiting our turn, the doors opened and five ... count them FIVE people came out.  My heart jumped up in my throat and I swallowed hard.  All I could think of was I can't do this ... I can't do this.  Barbara said there was a small window you could see out, so I made my request for the closest seat and followed them in to the sardine can with three others.  Yup ... that made SIX in our tin can including the kid who sat on dad's lap.  This picture of Tom was taken with the wide angle lens.  Talk about reaching out and touching someone!!! 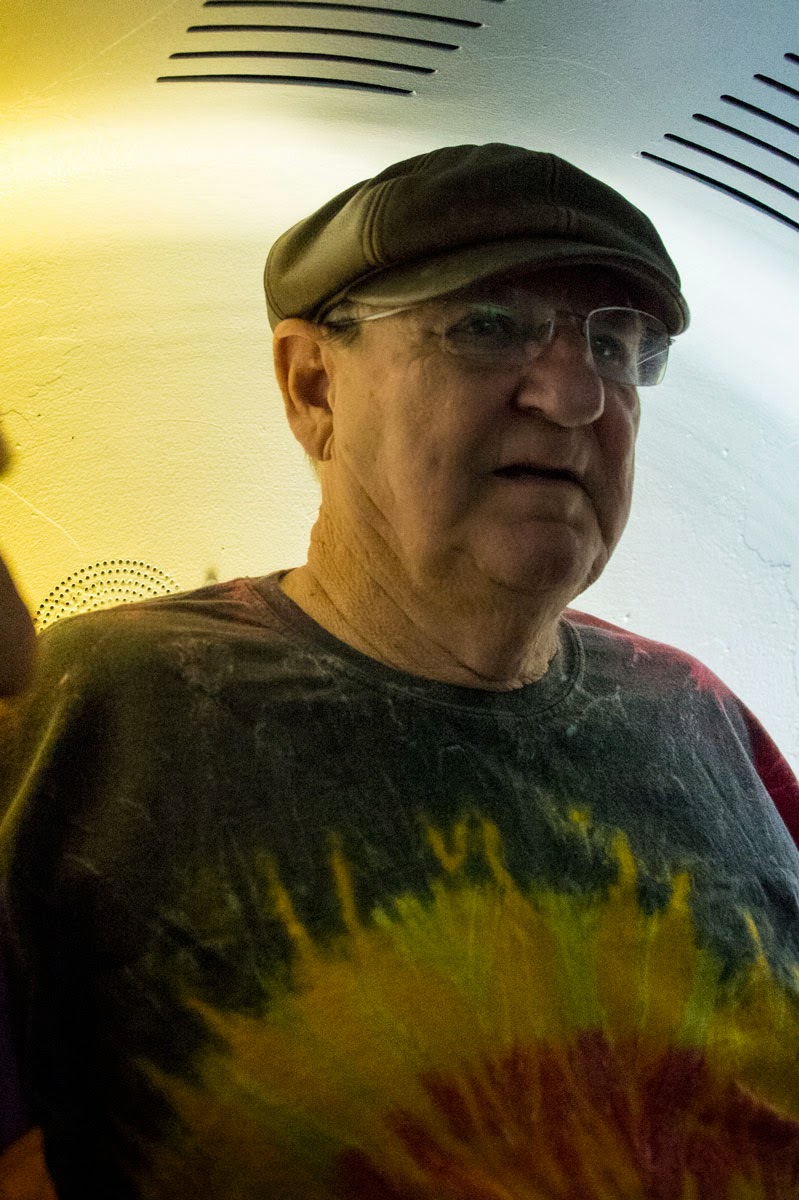 As the doors shut and the locking device totally blocked the window, the panic attack began!!  As it began to rock back and forth like a carnival ride, I opened one eye long enough to point and shoot this image.  The balance of the 4 minute trip I kept my eyes tightly closed and tried to control the rising panic in my chest!!  Did I mention that I'm VERY claustrophobic in small spaces??  And believe me, THIS is a small place, hardly providing enough air for three people, let alone SIX!! 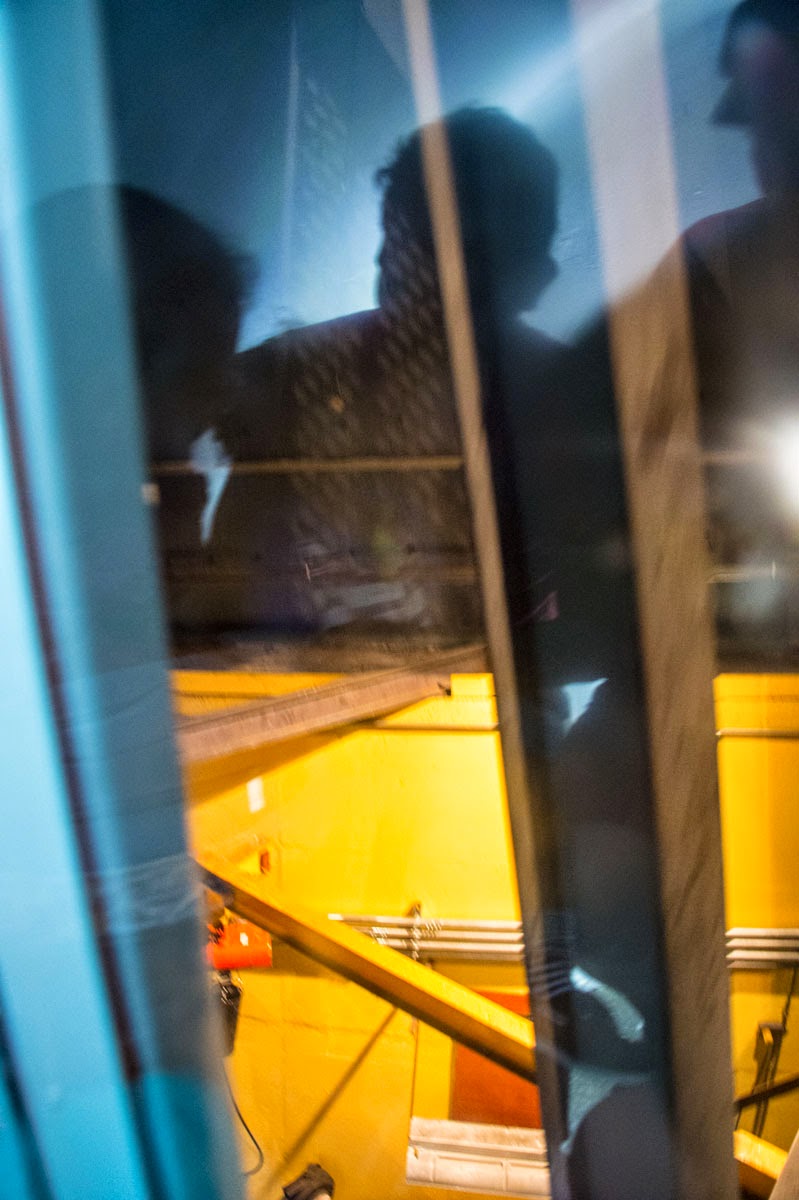 With eyes closed, humming a little tune to myself and after what seemed like 45 minutes, we arrived and stepped onto a steep narrow stairway where we climbed to the very top of the Gateway Arch, 630 feet in the air!!!  Whew!!!  Made it!!!  Packed with people, which didn't help my breathing problem, it was hard to find a window with available space for pictures. 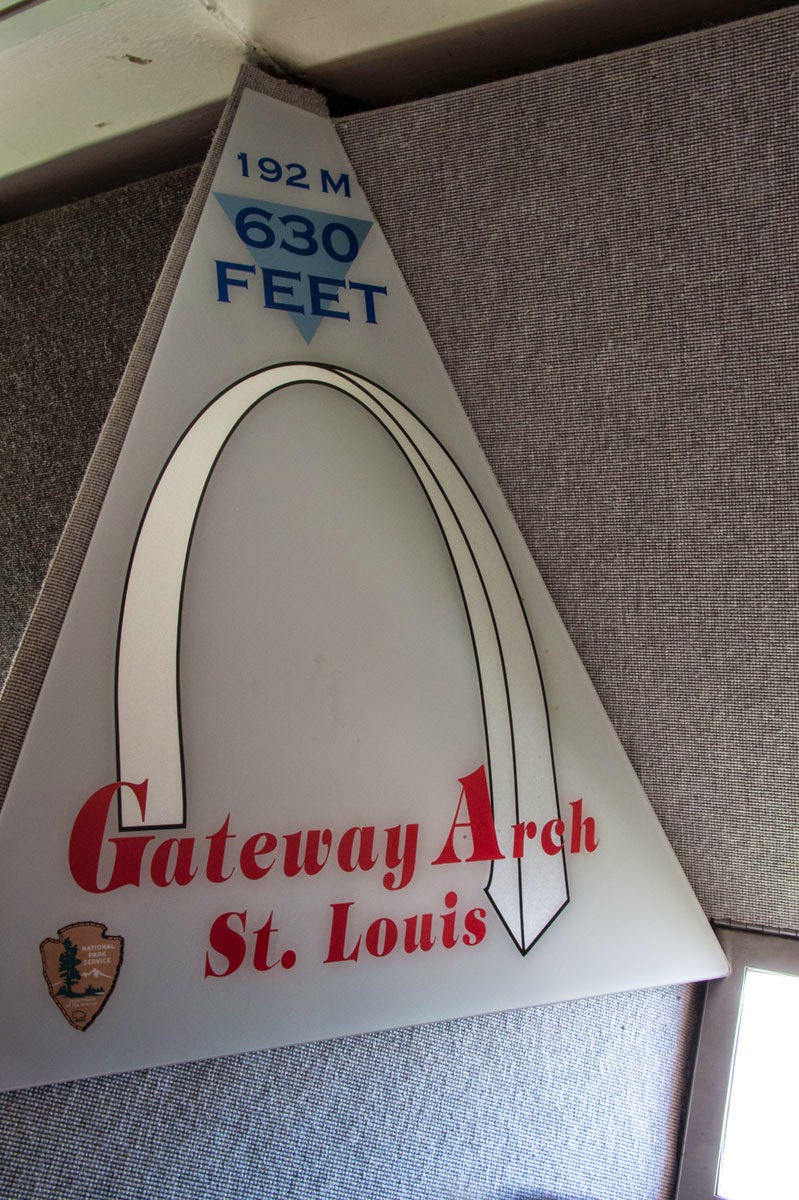 Once I got close however, the room opened up along with the view and I was able to breath again!!  Sorry for the smeary spots on the windows ... it's from the kids sticky hands. 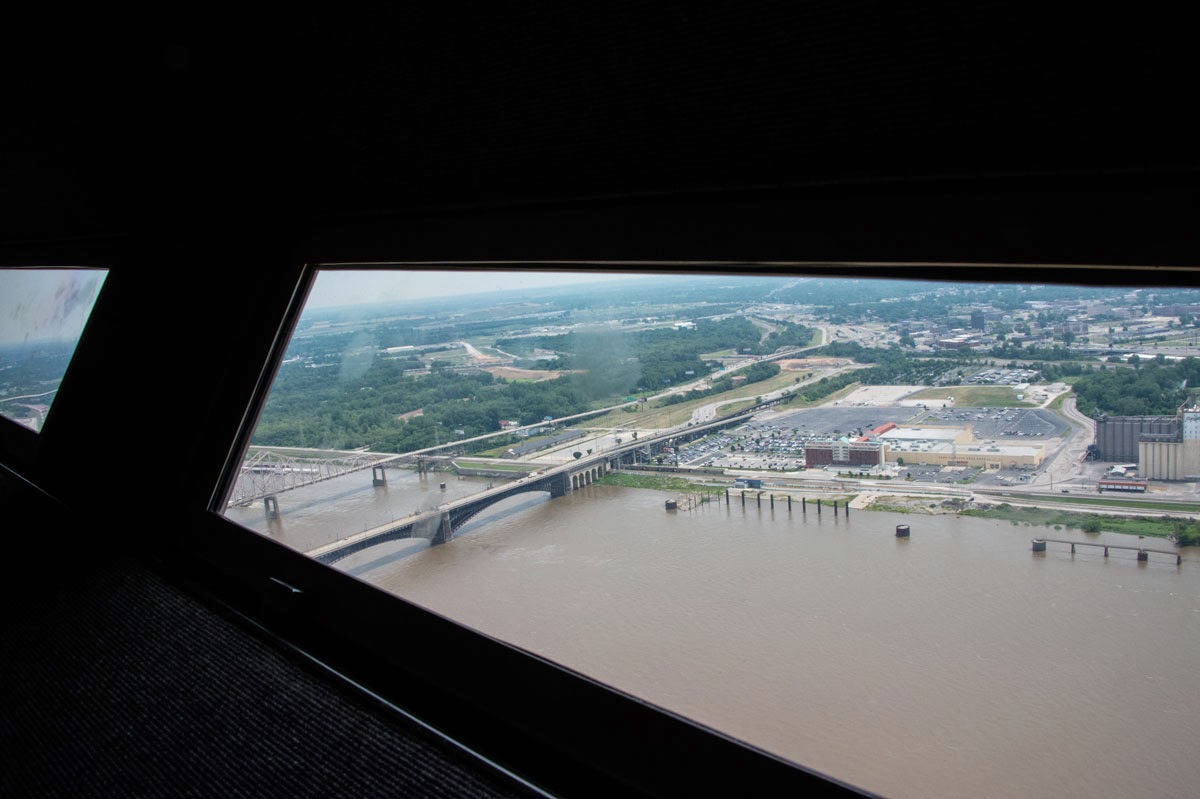 What a view!!!  Tugs were pushing loaded barges up and down the river and you could see for miles.  WELL worth the short sardine can E ticket ride!! 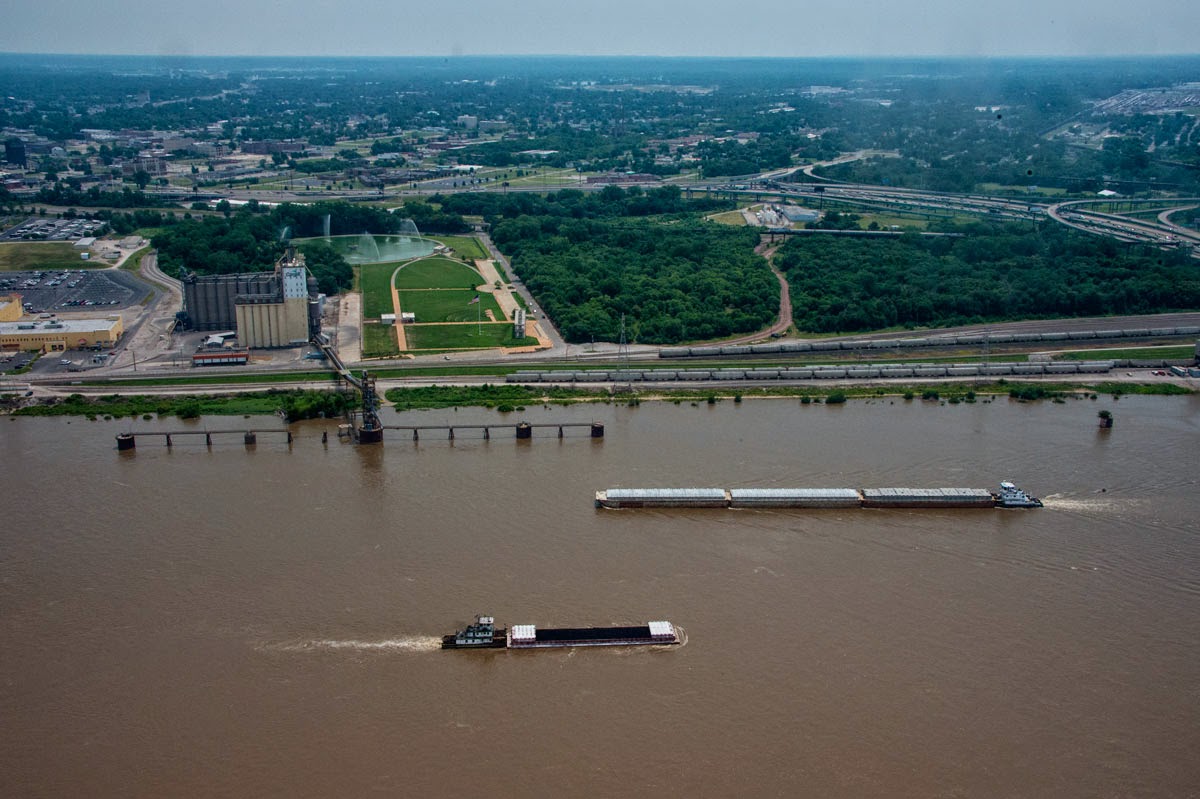 More relaxed, I crossed to the other side and saw St. Louis downtown.  One of the oldest Courthouses in the country, this is where slaves Dred Scott and his wife sued for and were granted, their freedom in 1846.  Later the U.S. Supreme Court determined that as slaves, they had no right to sue, which hastened the Civil War. 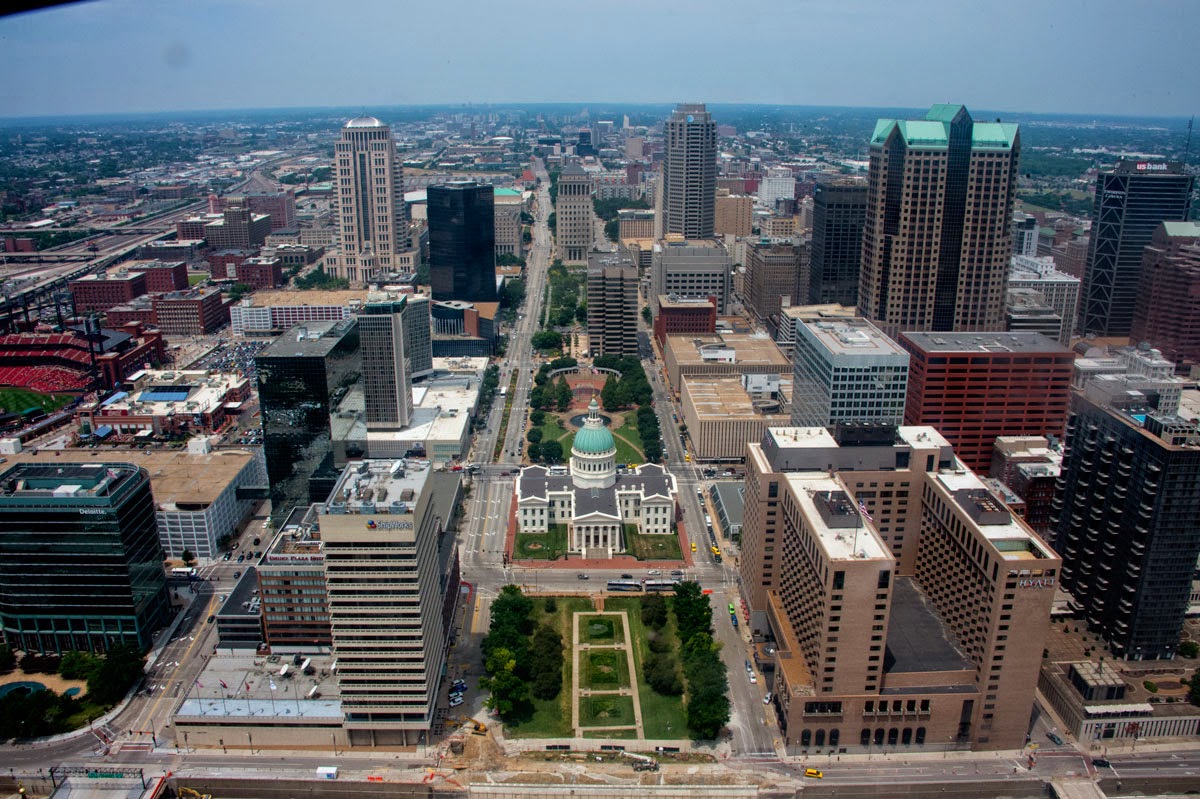 The St. Louis Cardinals baseball stadium kept me occupied for a few minutes .... 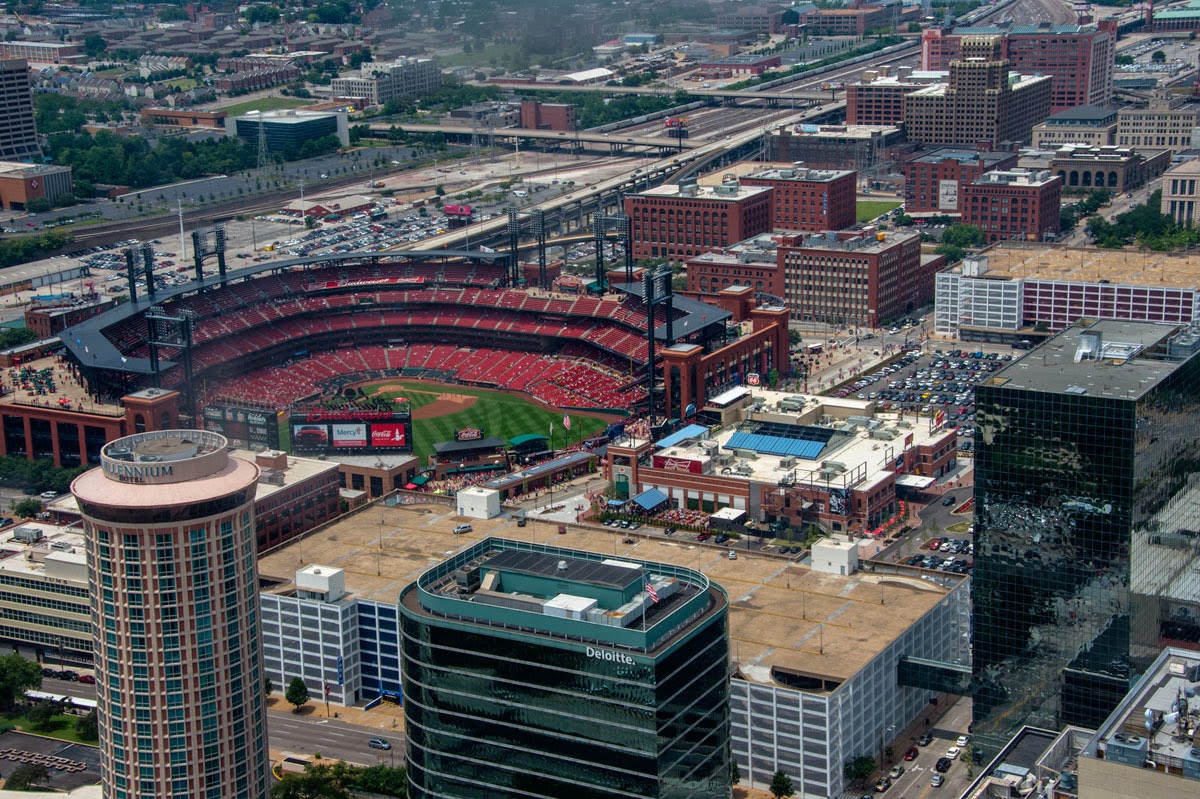 as did taking Barbara and Tom's picture in front of the 630' sign. 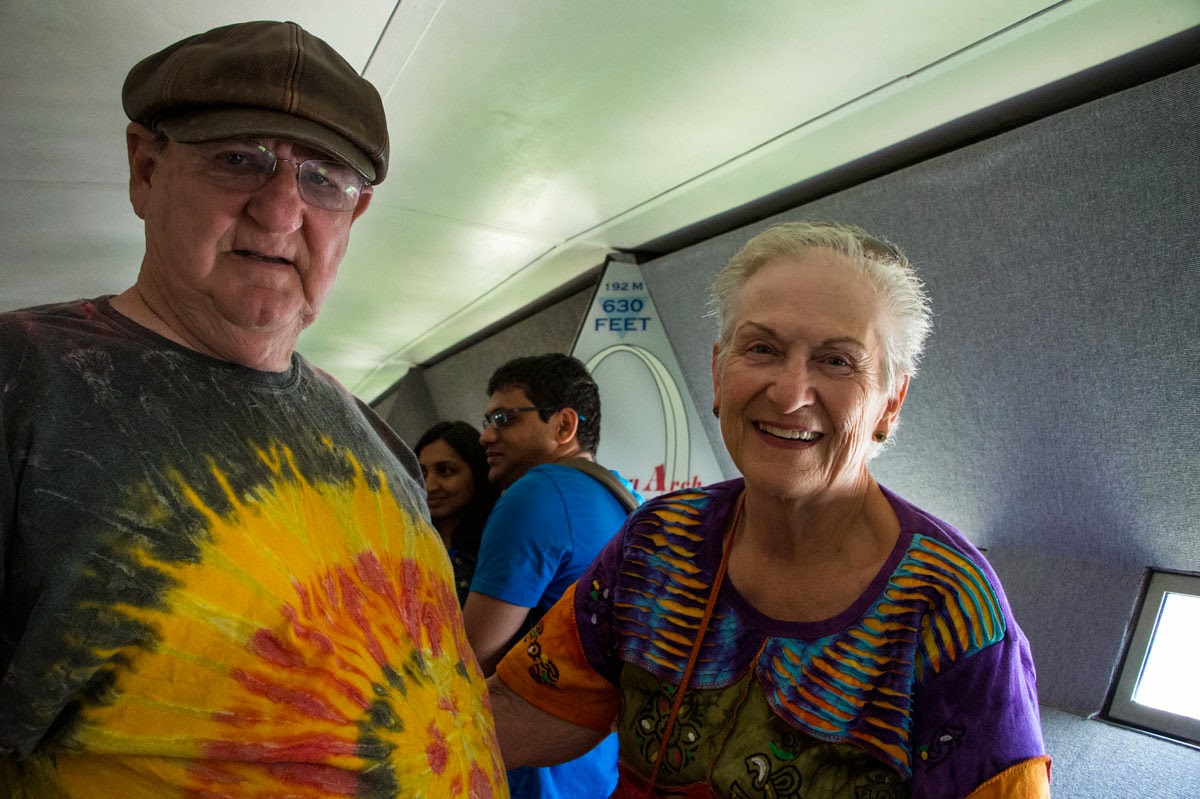 It was then that the fear of small places struck again ... now we have to go back DOWN!!!  It helped that the lady counting passengers said it was only a three minute ride.  The bars going down the right side of the wall in the picture here??  Those are the doors to our sardine cans!!  As you can see, the stairs and cans follow the contours of the arch.  Oh my .... here we go again!!  This time I tried to concentrate on Barbara and Tom's conversation with the other couple stacked against the opposite wall, while sucking up every molecule of air I could breathe. 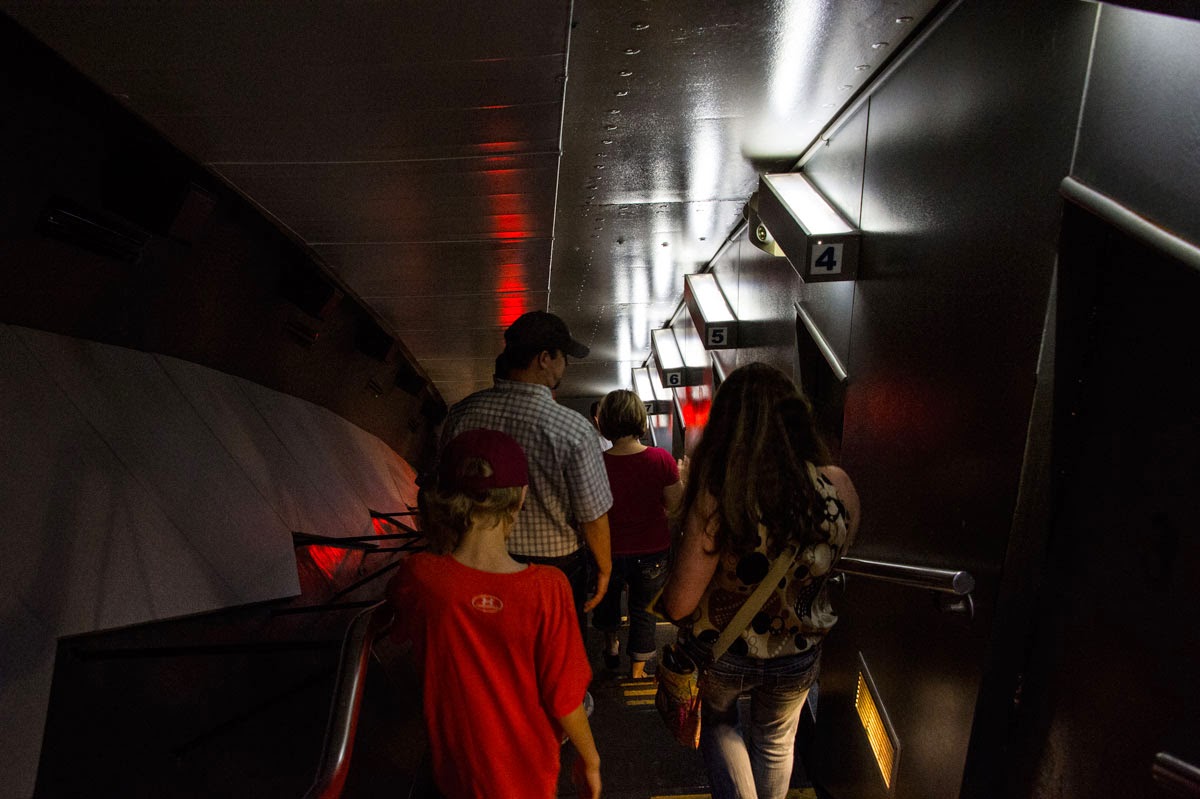 At long last we finally reached the bottom.  I squelched the impulse to shove open the doors pushing everyone out of the way and tried to act calm as a cucumber.  Boy am I glad THAT ride is over!!  The tin can was about 4 feet across and tall, but if you can screw up enough courage to complete the 4 minute ride up, you won't be disappointed!!  If I can do it ..... YOU can do it!!!

With my feet again firmly planted on terra firma, we checked out the Museum Of Westward Expansion.  A very strange setup for a museum, you wander around at different levels going the direction that interests you the most ... Indians, Cowboys, Settlors, Explorers ... and instead of reading about individual pictures, you read something someone wrote at that time and immerse yourself in the pictures, as the Ranger stated. 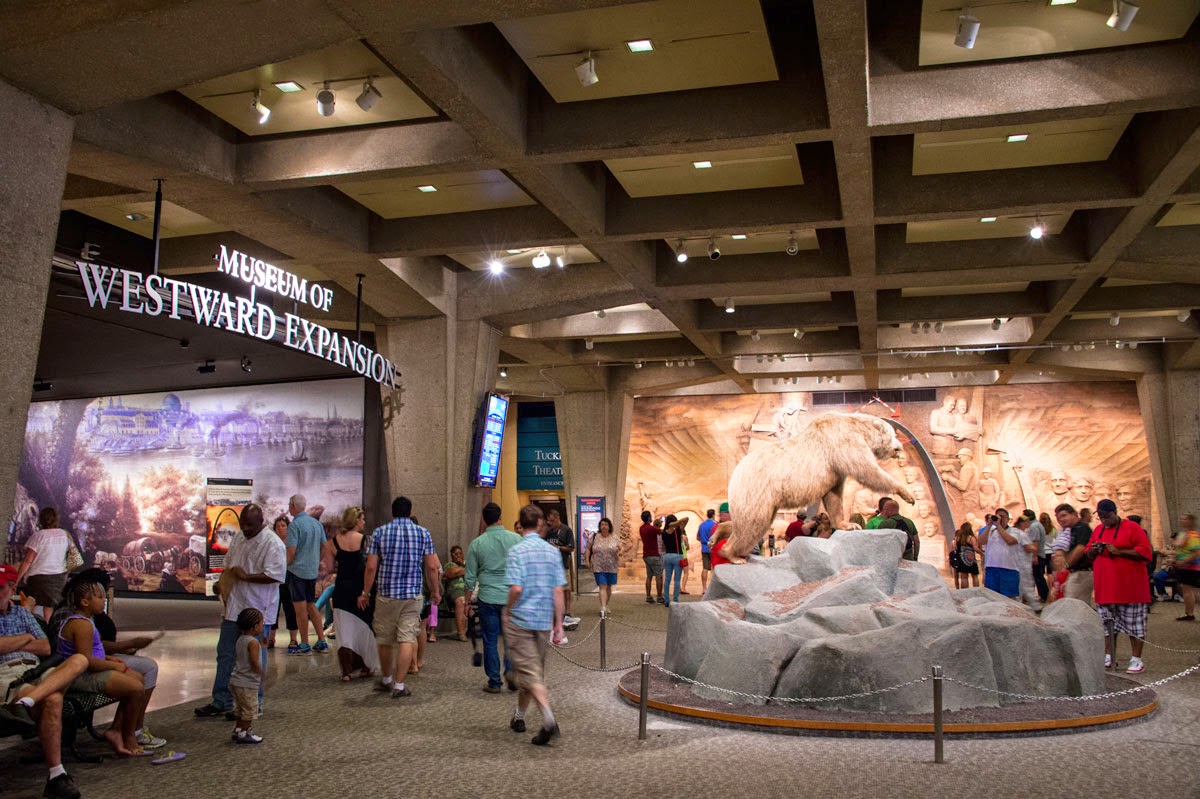 Built in the 70's, it's about to undergo a major renovation and will be closed for two years.  Hopefully they add a few more plaques telling you who people are and where the pictures were taken.  Of course I went for the Cowboys and Indians, where a teepee was set up next to this huge bison. 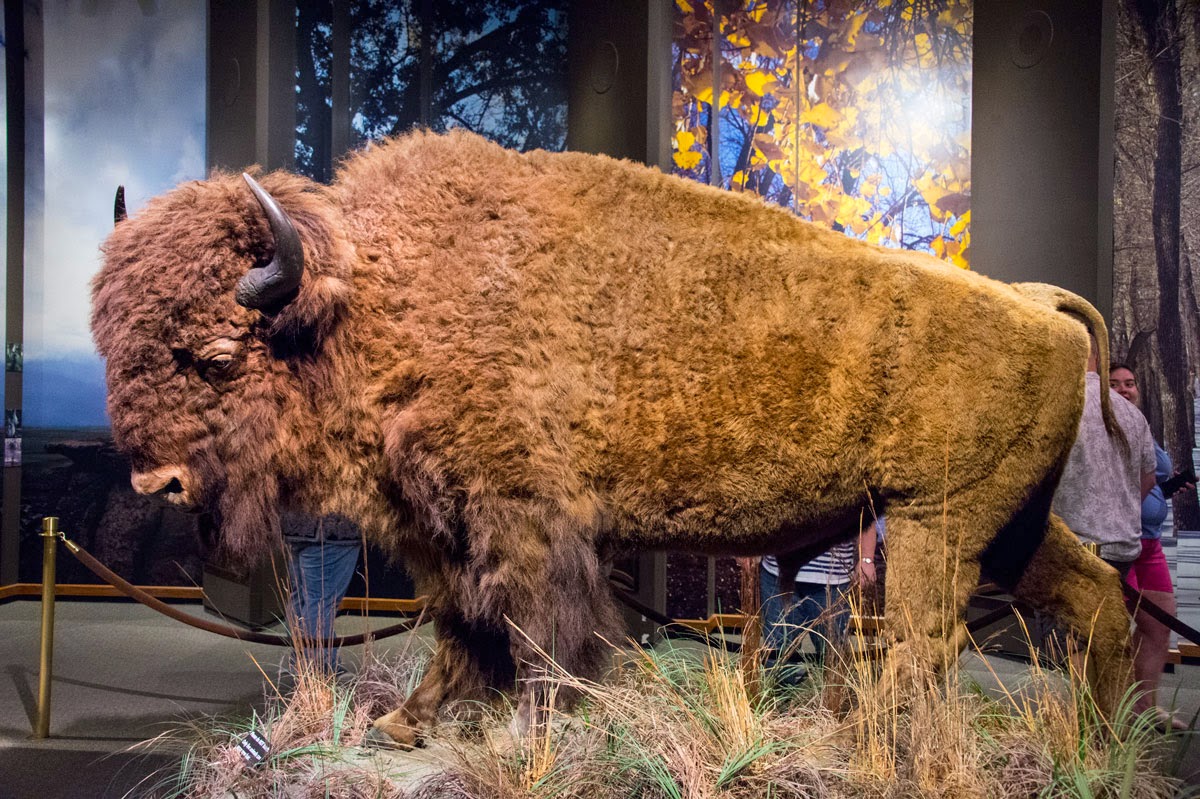 There are a few artifacts, including this Indian saddle, moccasins and bison blanket. 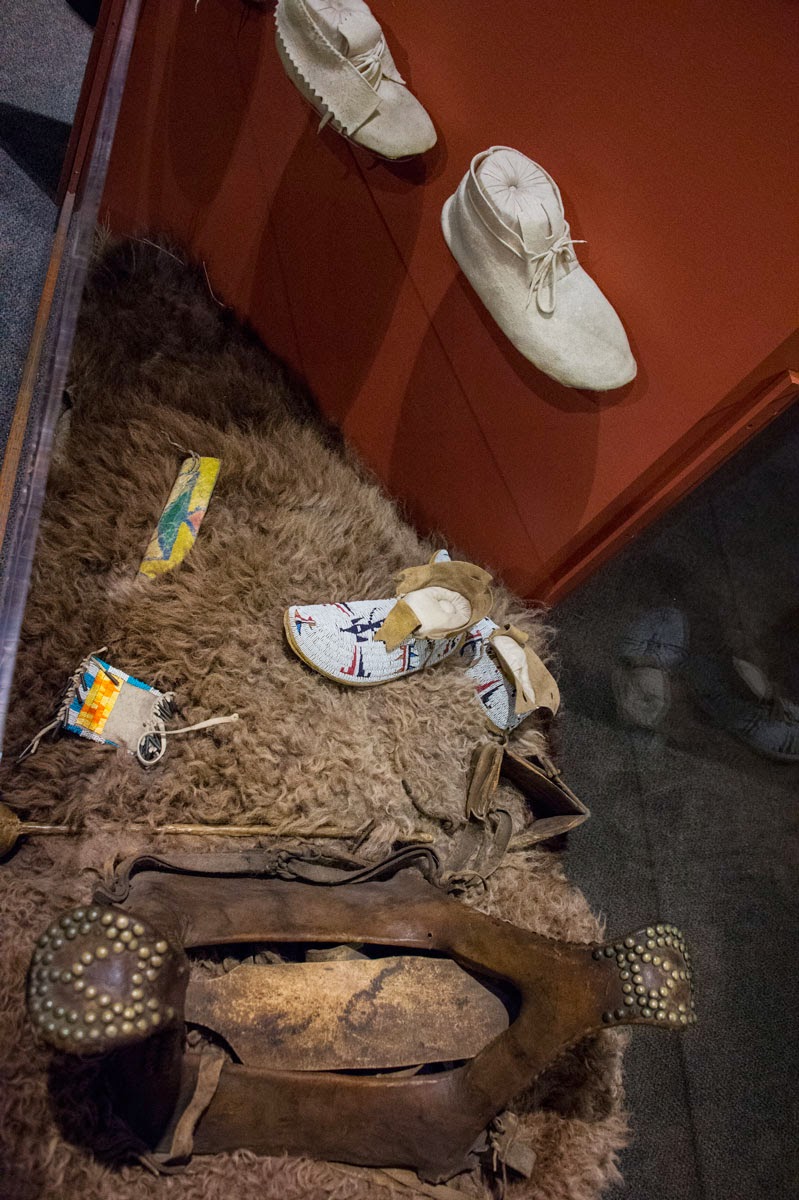 All along one wall was something I've never seen before.  Above were huge pictures of Indians from different tribes, and below were the peace medals given to them by our Presidents after we took their land.  It's a very sobering display of how awful we were way back then!! 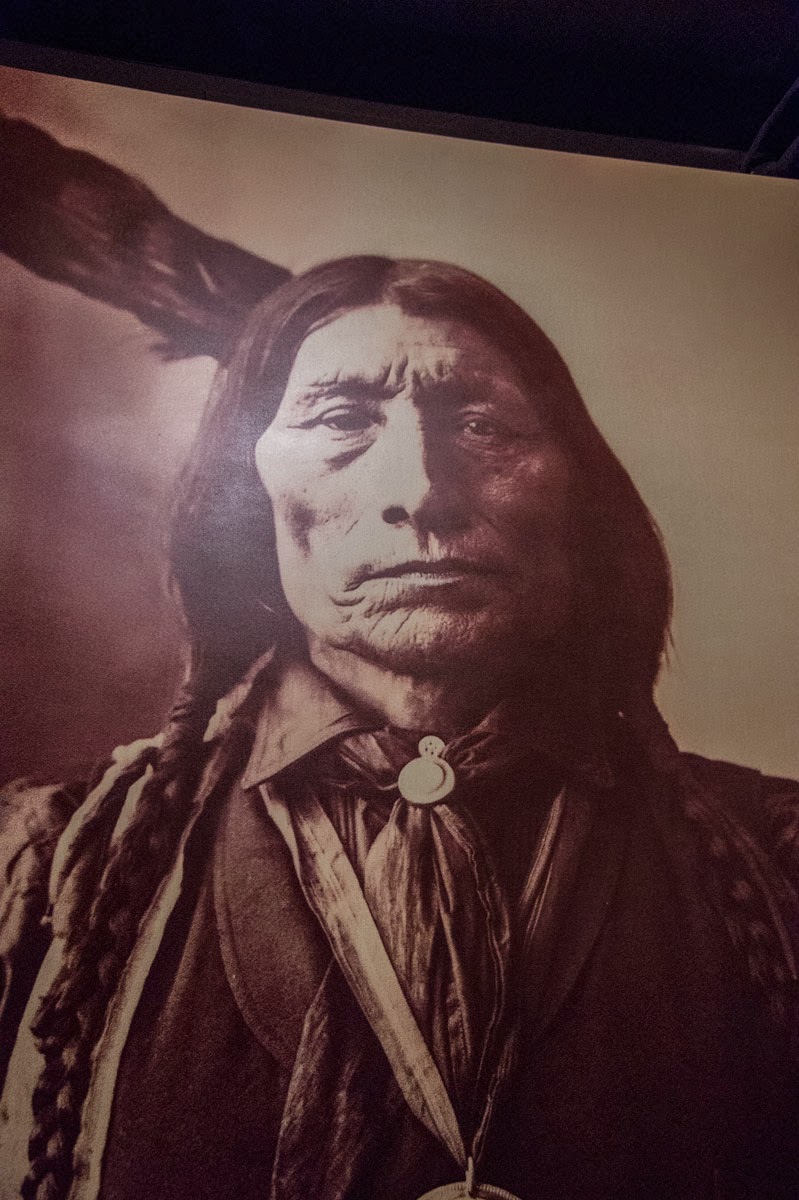 The Cowboy side had longhorn cattle of course, with a saddle or two. 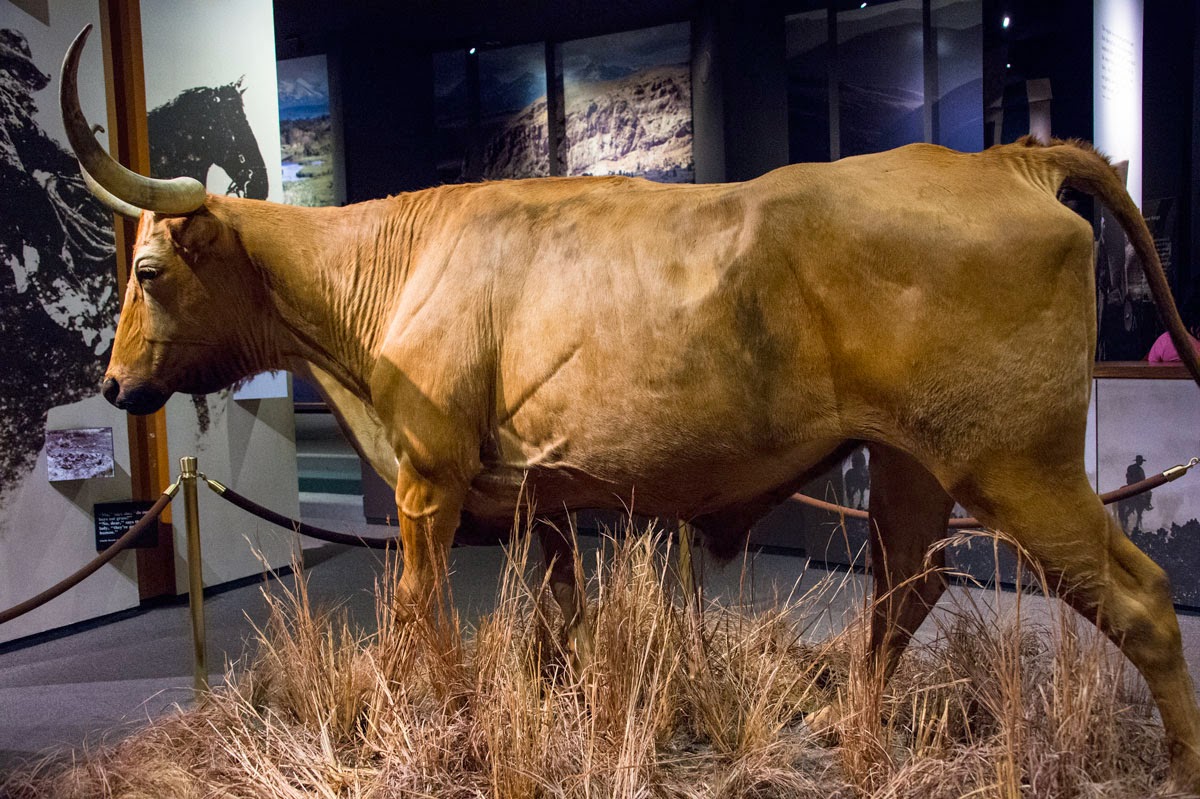 It was getting late in the day and we knew it was going to be hot, so we returned to the Elks Lodge where our rigs were parked.  I mentioned before that what we thought was going to be 30 amp turned out to be several 110 plugs in the parking lot.  Thinking our electrical connection would be plenty to run the air for the puppies, I didn't fuel up on the way into town.  BIG mistake ... and lesson learned!! I'm down to less than a quarter tank of fuel and have had to run the generator two hours morning and night to keep the fridge going.

Yesterday it was hot ... WAY too hot for the dogs AND me.  I ran the air via the generator for 2-1/2 hours before we went to dinner, but you know how these rigs are, they don't hold the cool!!  At 89 degrees inside by 10:00 pm, it wasn't looking good for a relaxing nights sleep.  With all the windows open and my fan plugged in to the light standard, it remained 87 degrees most of the night ... I know, because I was awake until 12:30, then up with sick Jessie at 2:00 and awake again at 4:00 trying to get the now cooler outside air ... inside.  At 6:00 am I started the generator.

The lesson:  if you are staying anywhere other than an RV park (Elks, Moose, Walmart, etc) be SURE to have a full tank of fuel should you need to run the generator all day!!  By the way, Tom plugged his rig in to the 20 amp 110 and has been running his a.c. the entire time.  It's only because of my Progressive EMS system that I can't do the same!!  Grrrrrrrr .........

This morning we plan a short trip to Grants Farm to see the Clydesdale horses, then we'll pack up, FUEL up and head northwest to Hannibal Missouri.