Marching To The Music In Wisconsin!!

I left the fairgrounds early to pick up a few more tools at Menards in case I have to do more electrical work, and made a quick stop at the post office to mail the defective module back to Progressive Industries.  That's when Barbara called to say we were leaving Springfield at noon instead of staying one more night.  Okay then!!!  I rushed back to button up the rig, dump the now full gray water tank and get ready to hit the road.  I was in such a hurry that I forgot to grab my small camera for pictures ... so the I-Phone camera it is for today!!!

We headed North under gorgeous skies and fairly cool weather.  It's funny in Illinois ... one day it's 95 degrees (feels like 110) and the next it's 65, as it was yesterday morning!!  Our intention is to travel up to the top of Lake Michigan, cross over and come down the other side. 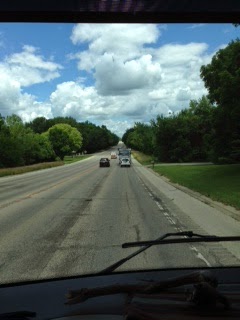 Trying to stay away from congested areas like Chicago, we went North on Highway 39 where it's all about the corn and soy beans and more corn and more soy beans!!  Every spare acre in this state is growing corn.  No wonder they like bio-diesel!! 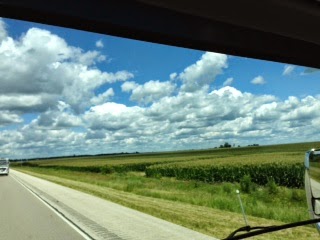 There are lots of ponds along the highway, I suppose for water runoff ... but each has a boat dock and a motorhome hooked up to power.  They just drive to the end of the field, set up their rig and instant vacation!! 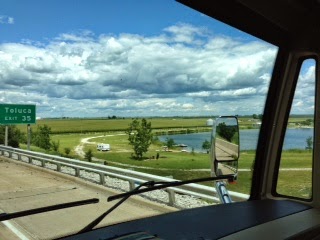 The highway seemed to stretch on forever ... it was a long four hour drive, unlike our usual 58 minutes!! 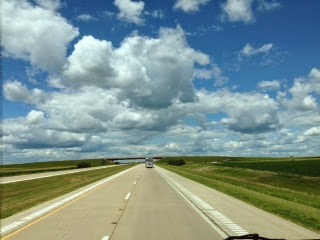 We crossed over the Illinois River on the Lincoln Memorial Bridge still under beautiful puffy-cloud skies!! 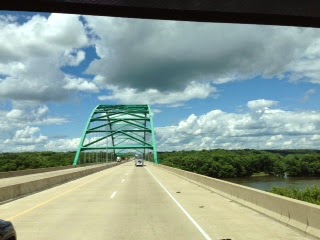 We even trucked down a toll road for a short distance, finally stopping to pay $2.85 for approximately 8 miles.  I checked my fuel mileage here on my dash computer ... geez I'm getting 10.5 mpg.  We must have a tail wind!! 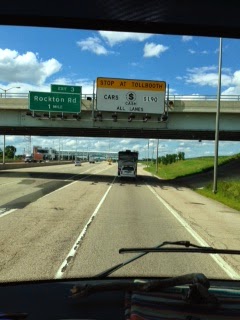 We crossed over into Wisconsin to Janesville, where Barbara planned for us to spend the night at the Moose Lodge.  They said there were a couple 30 amp hookups.  I have finally learned never to believe whoever answers the phone!! As we pulled in, Barbara and Tom went one direction while I went the other, to a light standard with a 110 plug in a huge parking lot.  You KNOW how reluctant I was to plug in to THAT, considering it didn't work last time.  Amazingly, the electrician did a good job, because it worked just fine, so at least I have the fridge covered.

While relaxing from the long drive, I noticed several cars drive around the parking lot ... then a large truck and trailer came in with "Green Beret Marching Band" in big letters on the side.  UH OH!!  The next truck came in with a trailer full of stands and frames, which they unloaded and set up on the grass about 30 feet away.  The parking lot began to fill up as kids gathered by the trailer.  Barbara ... I think there's going to be a marching band in the parking lot around my rig!!!  Good she said ... we'll bring our chairs!!  MY thought was "they don't practice after dark, do they??"  Pretty soon the horns started warming up as the drums tapped along. 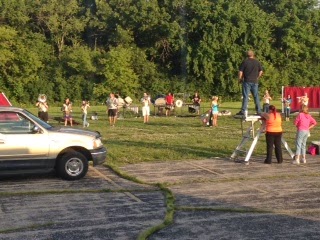 It didn't take long to have the band practicing not only it's music, but the dance steps and flag twirling!!  They were out there for three hours, marching to their music, practicing the same part over and over ..... and over again!!!  Practice makes perfect, right?  By the end of the show, they were getting pretty good!  Turns out there were only 18 band members. 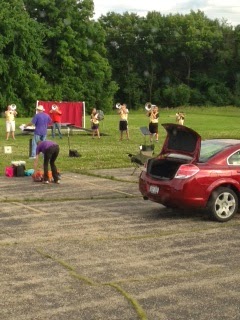 At 9:00 they finally broke up and began packing away the instruments.  Barbara learned from the lodge that this was the Boy Scout Band that practices every Wednesday night!!  Right here in River City, 30 feet from my rig ...  my own private marching band!!  You just never know what to expect when traveling the Midwest!!

This morning it's a spectacular 56 degrees with an expected high of 76.  Looks like a great day for tourism!!
Posted by Nancy Kissack at 4:53 AM