The corn is as high as an elephants eye in July as we head to Mr. Lincoln's home town!!  Every square inch in the Illinois countryside not taken up by a building, is planted with corn and soybeans.  Unlike California, they don't irrigate here, but instead depend on the rains to water the crops.  It's been a good year!!  The Red Barn Rendezvous RV Park we just left in Edwardsville, was surrounded by gorgeous tall corn. 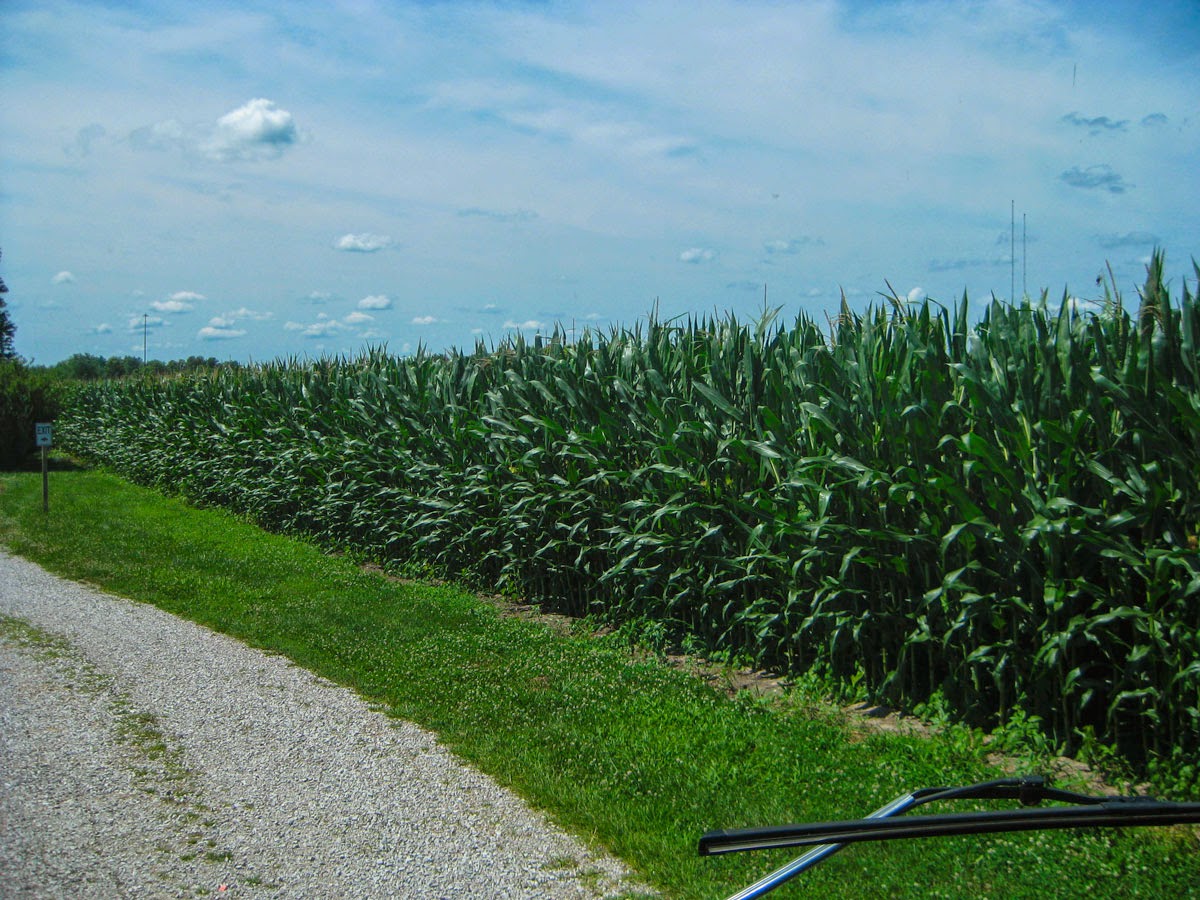 If you've got crops, you must have storage facilities, so granaries like these dot the countryside as we took Hwy 55 North to Springfield Illinois.  The storms have cleared for a few days, giving us beautiful weather for travel. 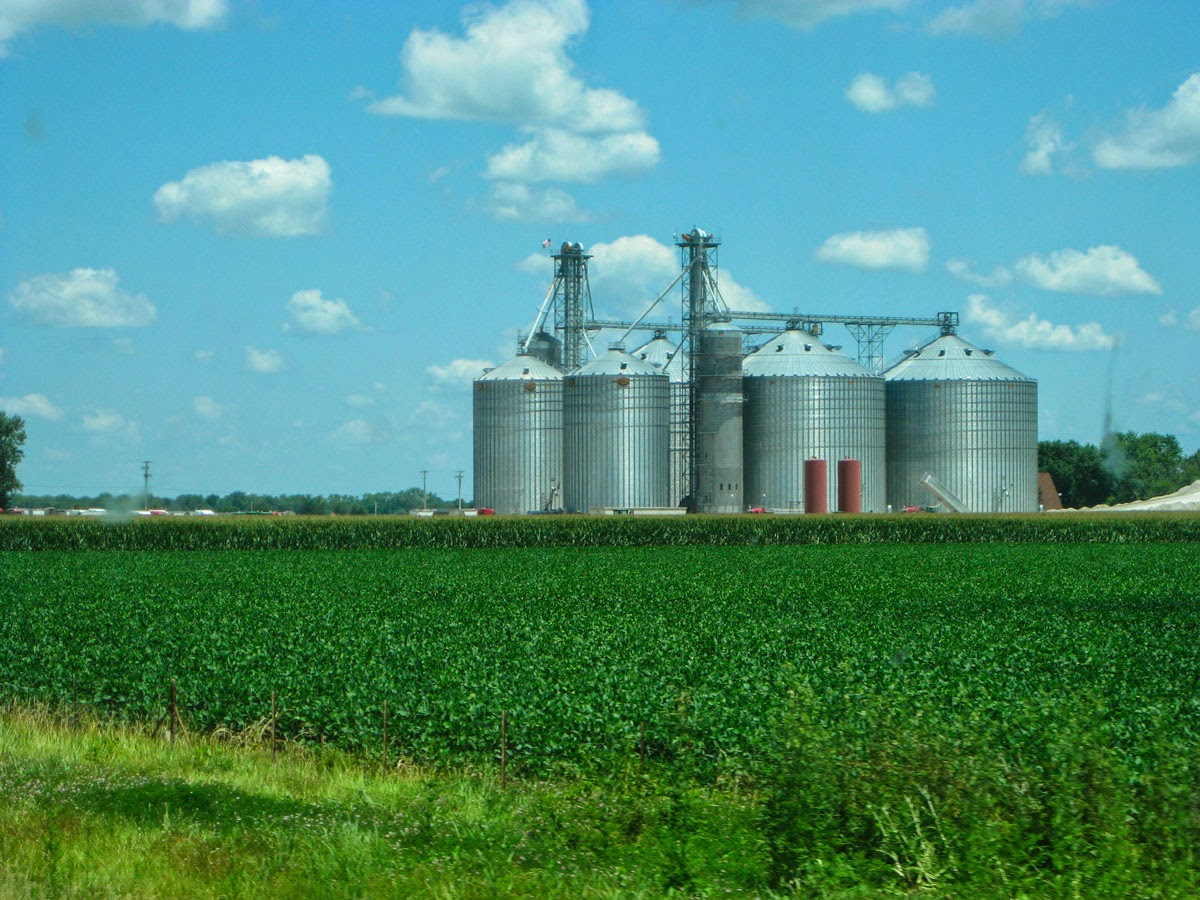 At the outskirts of town, we were met with this huge sign, Visit Mr. Lincoln's Hometown ... which is exactly what we plan on doing.  I'm also hoping to get my washer repaired while here. 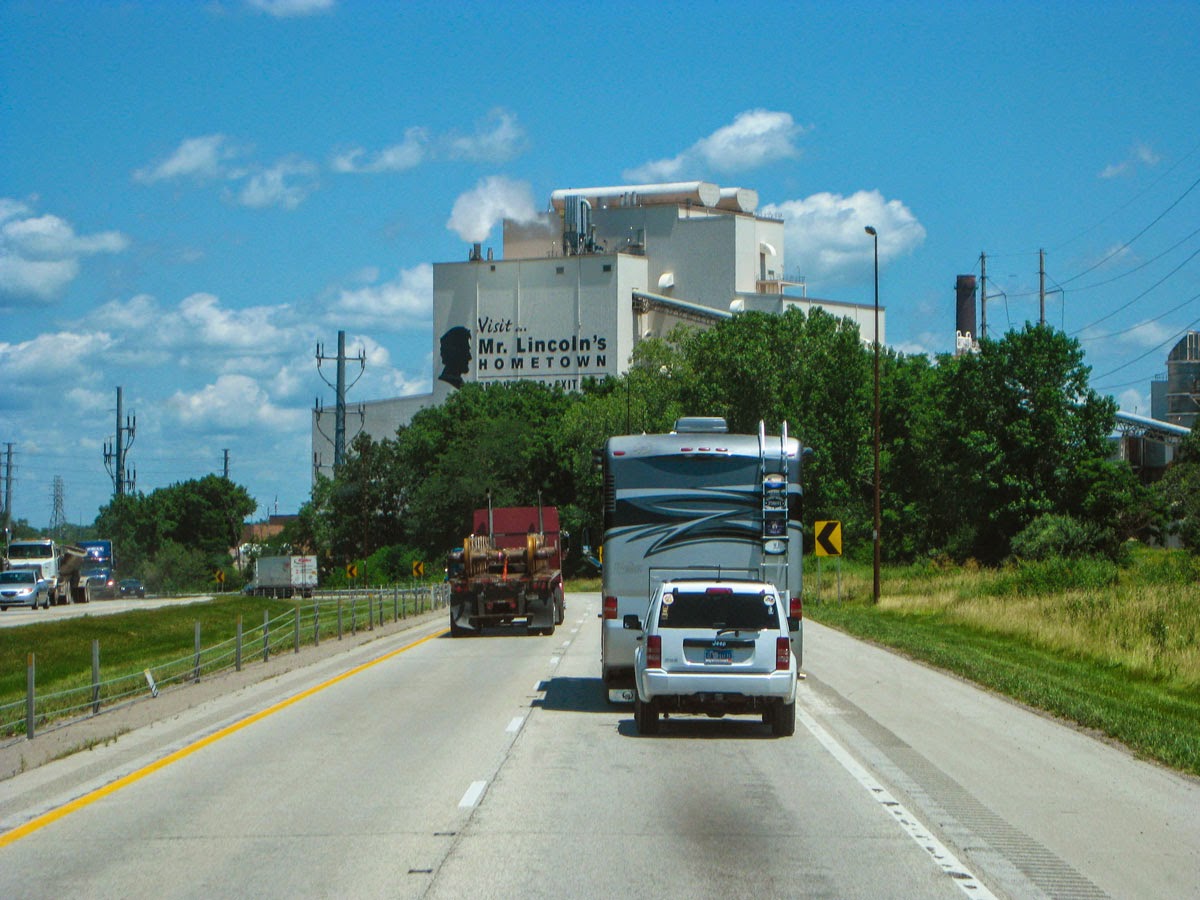 Not much to write about when it's an uneventful drive, but it definitely made for a relaxing day ... until we came upon this underpass with two huge locomotives passing by.  The lanes are pretty narrow and with my eyes glued to the white line hoping I didn't get racing stripes down the right side of my rig, I snapped away and luckily got two pictures!! 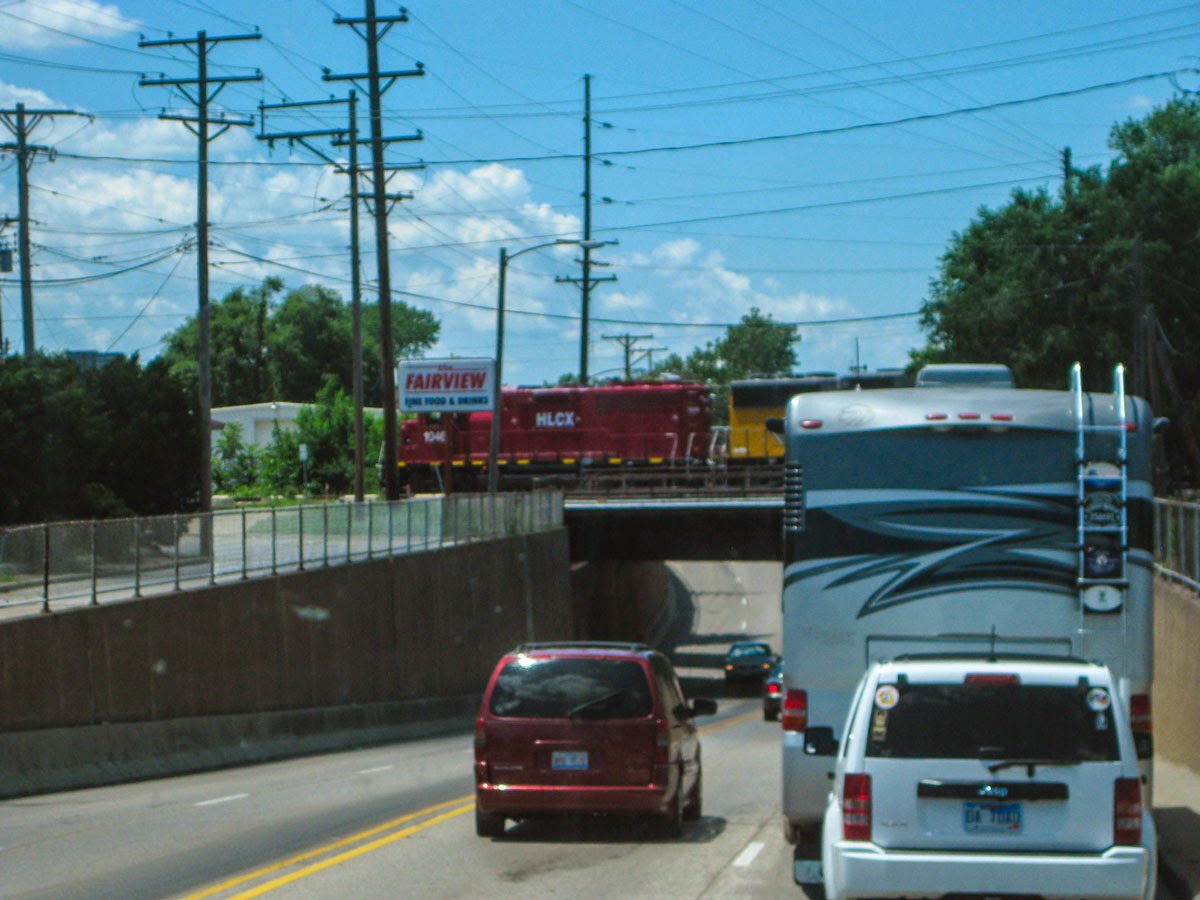 We are stopping at the Illinois State Fairgrounds in Springfield to spend a few days sightseeing and picking up mail. 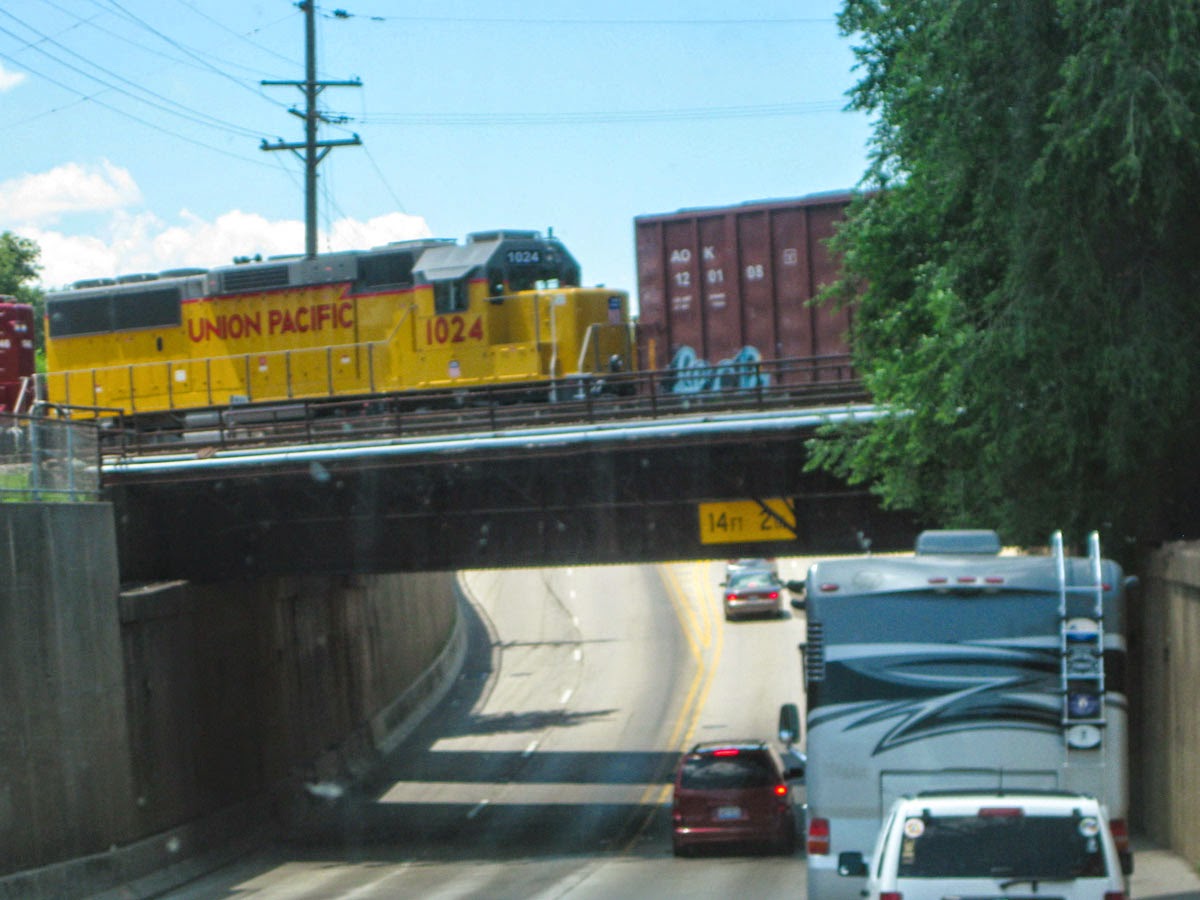 Talk about a nice facility.  If you are ever in this area, this is the place to stay, except in August when the fair is in full swing.  We are parked in one of over 300 vendor spaces, most with 50 amp, some with 30 and good Springfield City water.  Only the handicapped sites have sewer, but if you want one, just ask the Camp Host.  He's more than happy to accommodate you if he has room.  With a senior discount, it was $20 per night. 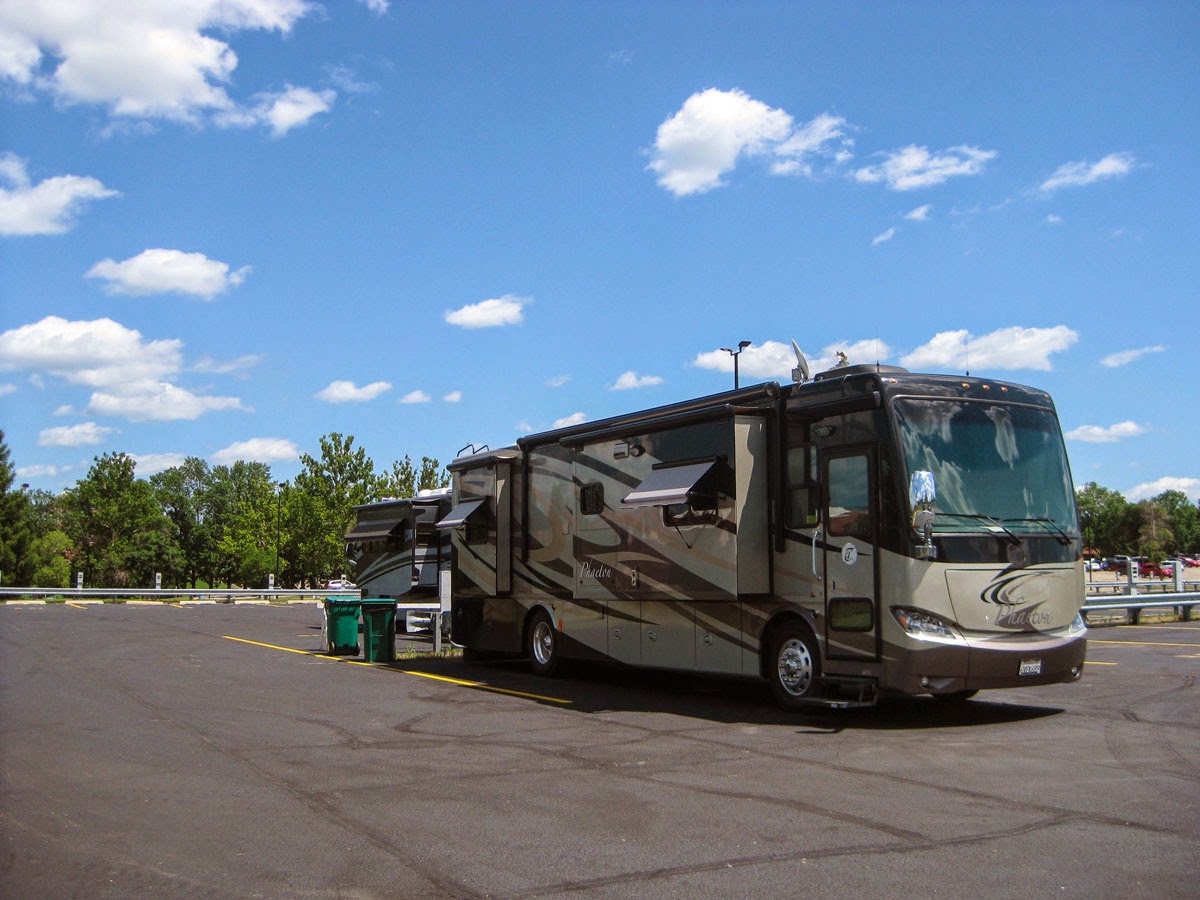 When we heard there was a Farmers Market at the far end of the grounds, we decided to check it out. All that corn on the way over made us hungry.  Besides, I was so frustrated that I can't knit, I just had to get out of the house!!  The first stop turned out to be a Garden Flea Market, where I luckily picked up two Bonsai containers ... wait for it ............ for $4.00 total.  These containers are VERY expensive ... many upwards of $30.  Score one for Nancy!!!  Maybe I'll be better at Bonsai than I am knitting!!  That's my possum Pansy sitting on the petrified wood ... don't tell Kitty Pansy next door that she has a namesake!! 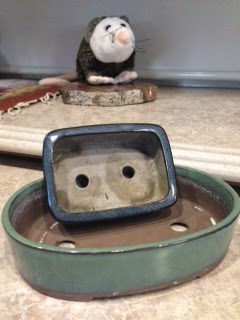 We finally found the REAL Farmers Market, which was packed with people.  Mostly I think because they had a HUGE wine and beer tasting going on.  All the fruits, vegetables and meats had to be grown locally and were certified by the Ag Department. 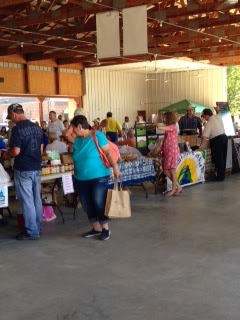 I got corn and tomatoes, Barbara and Tom cherries, blueberries, corn, tomatoes and I think bread.  There were some homemade cinnamon rolls that looked amazing, but I passed them by for the Walnut Caramel Apple Pie!!  At least I bought the small 6" instead of the bigger 12" pie!! 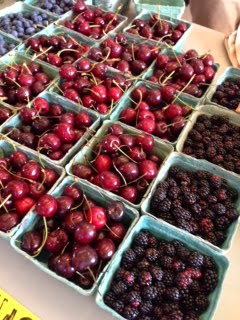 I have a sneaking suspicion that Tom got a pie too!!!  How could you resist ... they all looked so yummy!!! 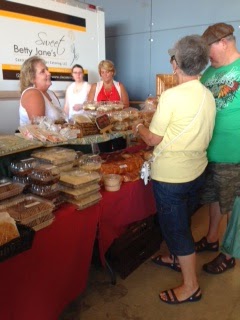 In an effort to disclose both the good and bad about campgrounds ... and this one is GREAT ... when the TV goes off at night, you can hear the trains run fairly close to here until about 10:00 pm.  You know they have to blow their horns at every crossing, right??  Well there are 13 crossings before it finally gets past you and quits the blowing!!  From then on it's quiet ... they don't come through town at night and during the day you won't notice at all.  They start up again around 6:00 am when I'm already up.  If you're a good sleeper like Barbara and Tom (a bomb could go off and they wouldn't notice, lucky guys)  you'll probably sleep right through it!!