I've been on the road for over two months now, following the Westerfields and Pansy, and we've met all kinds of people who make up this country.  This week we're probably going to meet a lot of patriotic people celebrating Independence Day!!

As we left Blue Springs, the bad weather cleared a bit and we had mostly sunny skies all the way to St. Louis.  All I can say is this country is big, beautiful and green!! 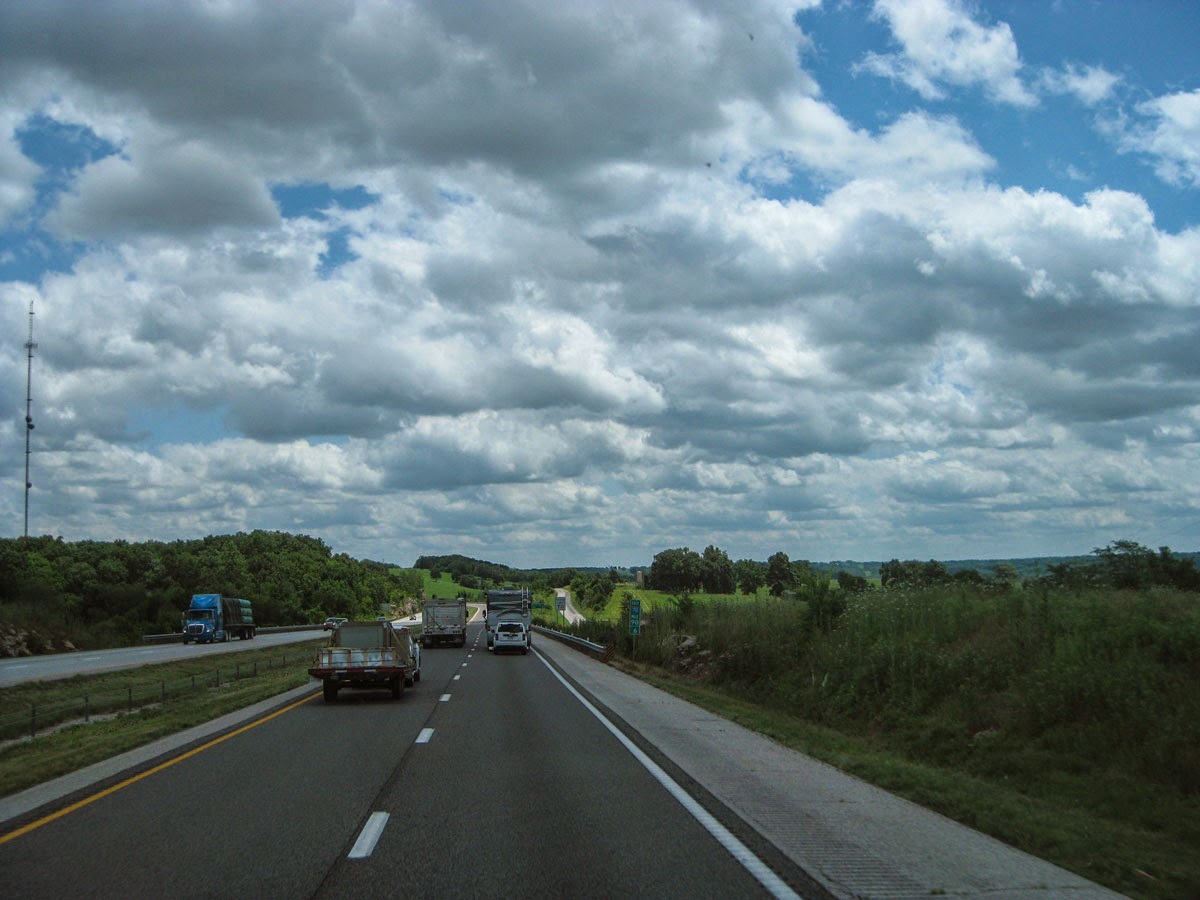 Again, we met some wonderful people!!  When we arrived yesterday afternoon at the Oakville Elks Lodge south of St. Louis and discovered their 30 amp service magically turned into a 110 plug, I was immediately okayed to park on the other side of the parking lot, next to several large trees for shade, and plugged my fan into the light pole standard.  I should have been able to plug into the rig, as I do at home, to keep the fridge going.  Apparently I'm still having electrical problems, because now it won't work on 110 at ALL!!  How frustrating!!!  Again, we think it is the Progressive EMS box that is causing the problem.  This will be the fourth call to Darryl whom I purchased it from in Indio.  Maybe THIS time, I'll get to talk to him personally instead of the guy who just says there's nothing wrong with it!!  Maybe I can find a local electrician who knows about RV's.

People in the Midwest LOVE their fireworks and are getting ready for July 4th celebrations, which actually begin on July 2nd!!  There's not just ONE fireworks display, there are MANY!!  As much as I like seeing them at the nearby park in California, I can't say as much about my neighbors who set off bigger blasts than the City does.  I never could figure out where they got those HUGE bombs!!  Now I know ... there are buildings like this one every 20 miles all across Missouri.  People are SERIOUS about fireworks here!! If not sold in a building, they are sold in tents every mile or so in town.  BIG tents!!!  It's not even July 4th and they are practicing ahead of time!!!  Last night the fireworks went off for about 30 minutes ... or maybe it was gunshots, I'm not sure which!! 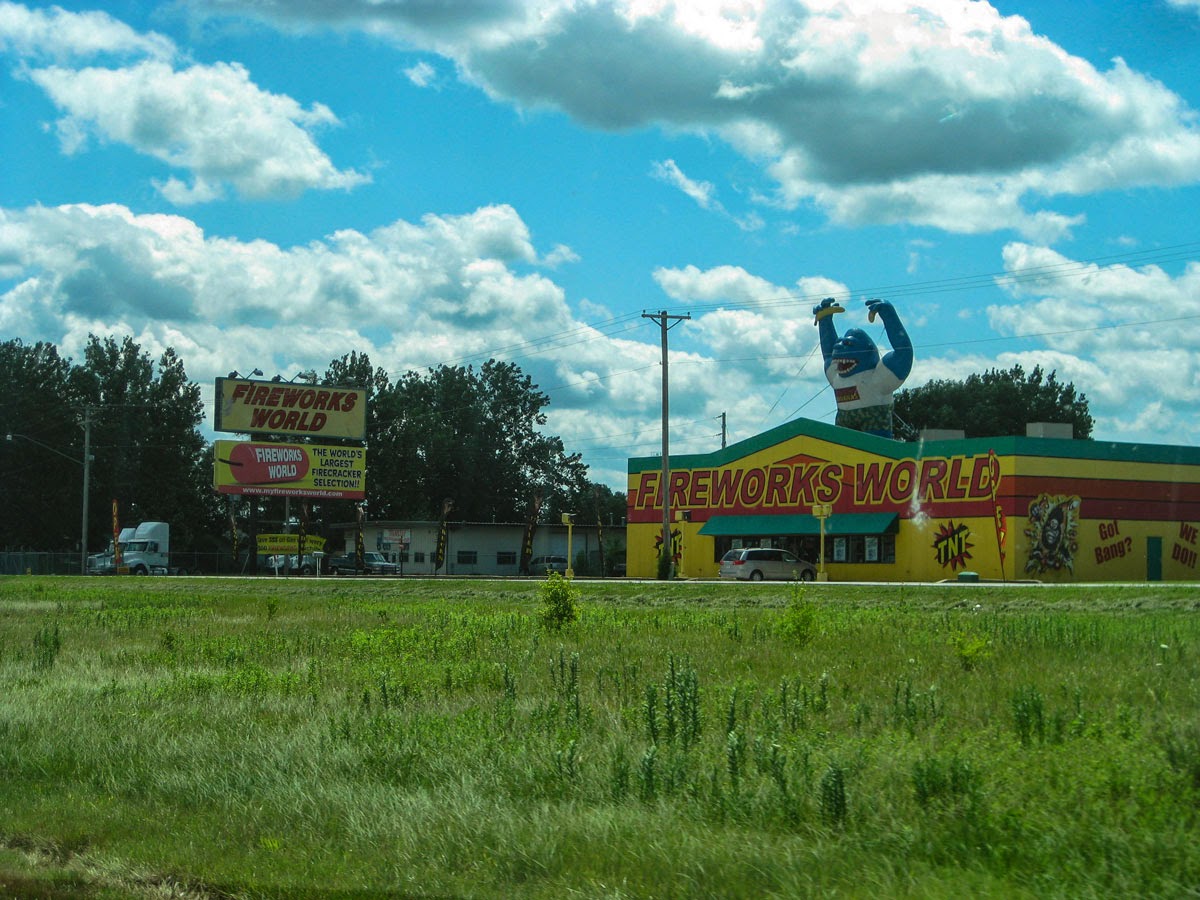 It also took all kinds of hardy pioneers to trudge across the land in wagons and on horseback to settle the West.  As I drive along in my air conditioned rig listening to my country music, I think about all those people who walked for months in hot, humid, flea, tick and chigger country to get to their promised land.  What do you think they thought about when they came upon a river like this ... the big Missouri is not full to overflowing, but she's close as we crossed over on the bridge.  Then there was the Civil War ... how could you possibly see who might be hiding in the bushes and trees ahead because it looks like every square mile is covered with greenery.  It took some tough people to settle this country and I hope everyone is celebrating them this weekend!! 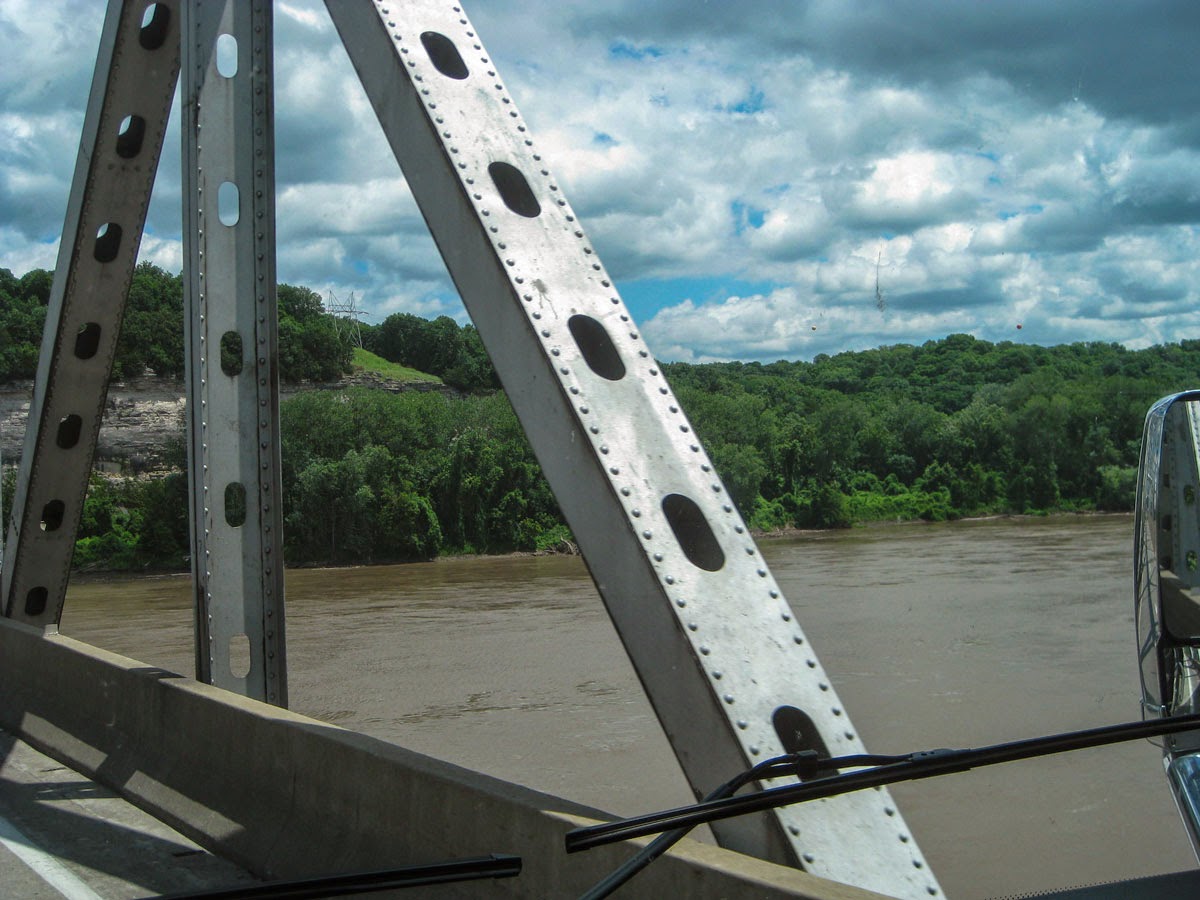 As we came around St. Louis, it was back to big city driving as we crossed the Missouri for the second time.  Parked here at the Elks Lodge however, you would never know you were that close to a huge city.  We're surrounded by beautiful trees and green grass ... hopefully not full of chiggers!! 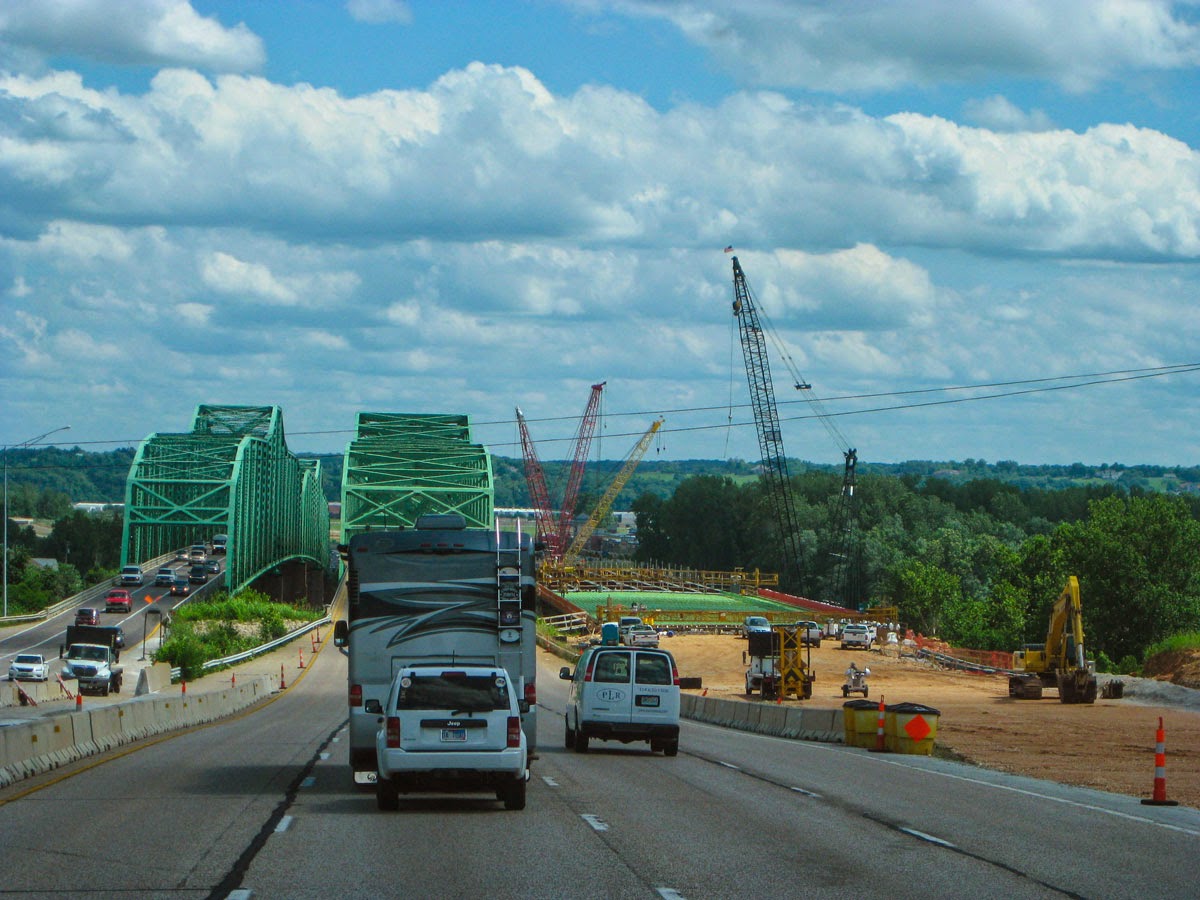 I was hoping to see the big fireworks display at the Arch, but since it is under repair, we will travel a little north this evening for the first celebration.  How awesome ... I get to experience the Fourth of July in St. Louis Missouri!!!!!