The Mississippi Is Locked Up!!!

It's interesting just how much you can learn about how our country works when you travel.  Today at the Melvin Price Locks and Dam in Alton Illinois we saw how the Mississippi River is locked up, allowing an amazing amount of product to move from one side of the United States to the other.  One set of nine barges keeps 1,000 trucks off the highway.  Without the 27 locks on the river, the depth up north would be less than 5 feet, nowhere near deep enough to move barges.


Before we left for the locks, I decided to do a quick load of laundry.  Now I have another problem to solve.  The washer was full of water, wouldn't drain and wouldn't unlock so I could get the clothes out.  This machine has had all of 15 loads of wash run through it!!  When I was finally able to get it open, I was facing a front end loading washer full of water.  With a garbage can, I unloaded everything, wrung them out best I could, hung them up and raced out the door for our next tour. 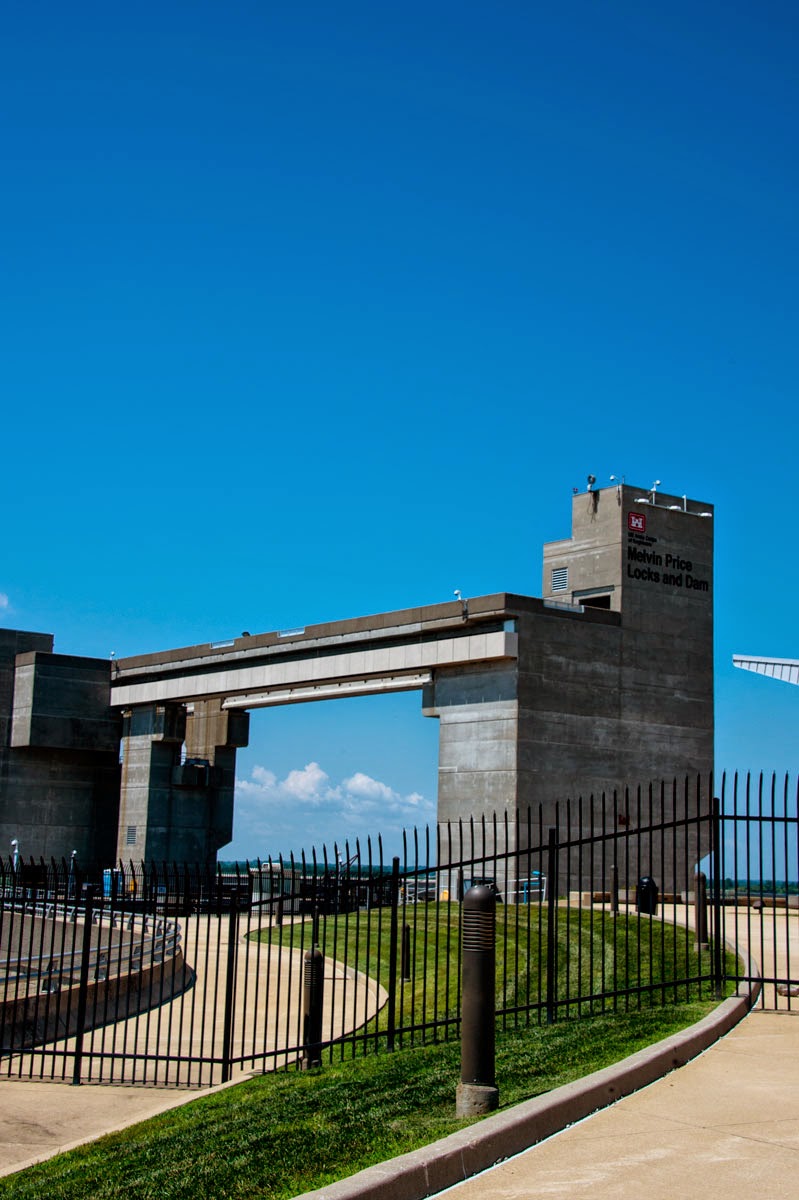 The locks and dams along the Mississippi keep each section of the river at a level high enough to allow barge travel.  This lock is number 26, with a museum giving you a personal experience, not only of the local wildlife, but being a Riverbarge Captain.  We crashed every time!! 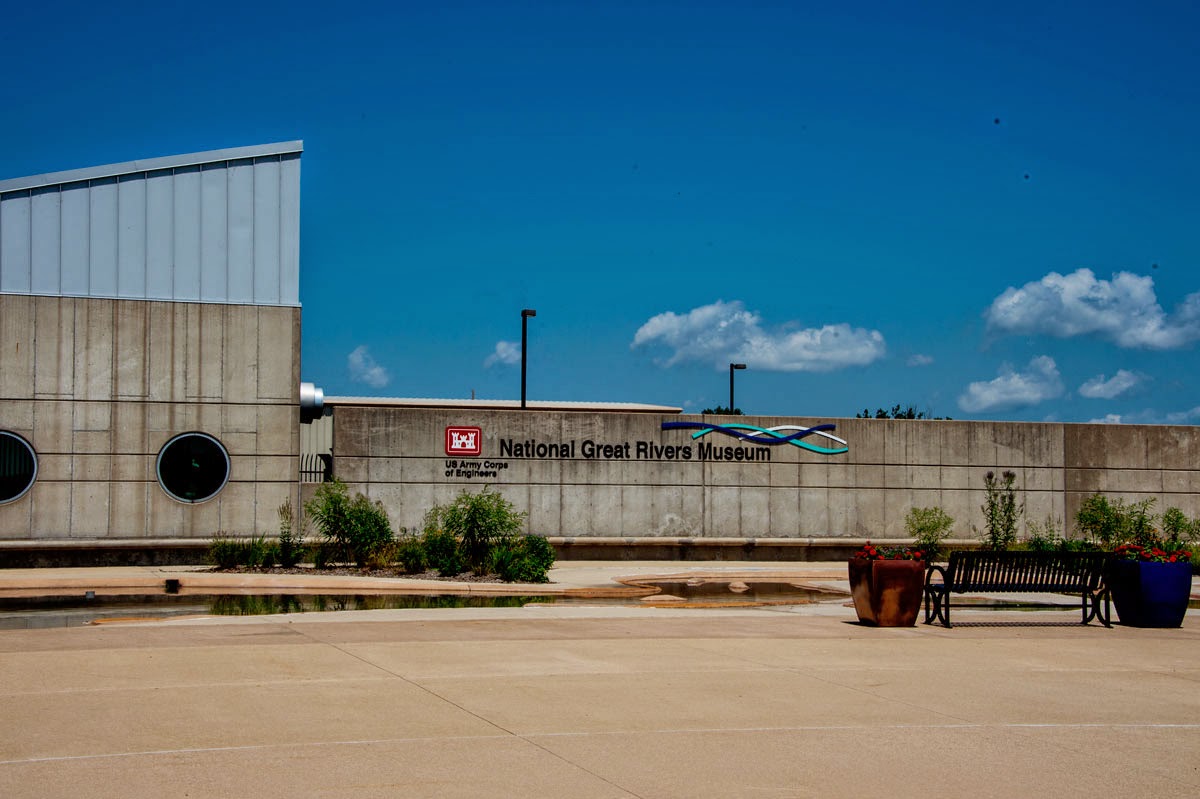 Just as the tour started, a fifteen barge set came in.  Due to cables breaking in the long lock, tugs pushing large loads have to break them apart, letting 3 long and 3 across, go through alone.  Another tug working for the Corps of Engineers, pulls the barges out and awaits the second set and helps lock them back up as they head down the river ... or up as the case may be.  I know this is probably like watching corn grow, but I could sit here all day watching these guys maneuver the barges. 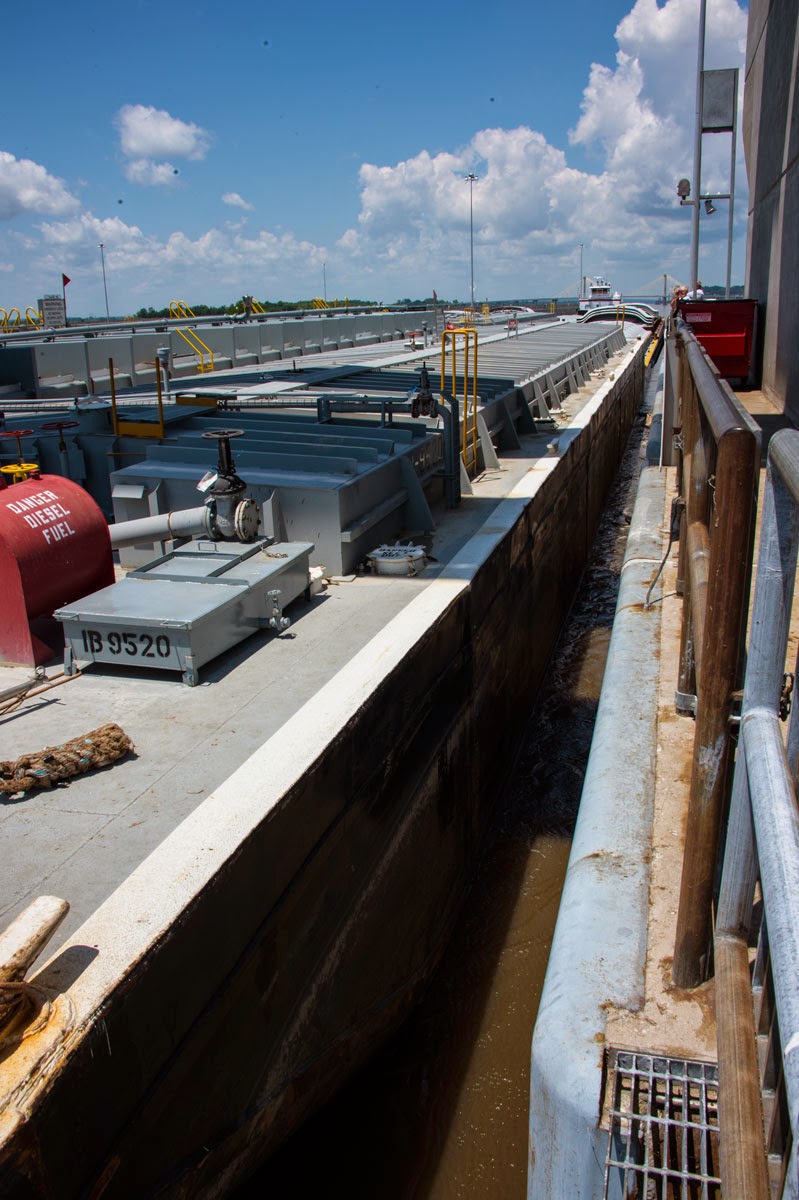 The lock doors are closing behind the first set.  The river was so high from flooding that really there wasn't any difference between the level of the lock and the river downstream.  The barges still have to go through however, since the river runs WAY too fast through here to allow traffic without them. 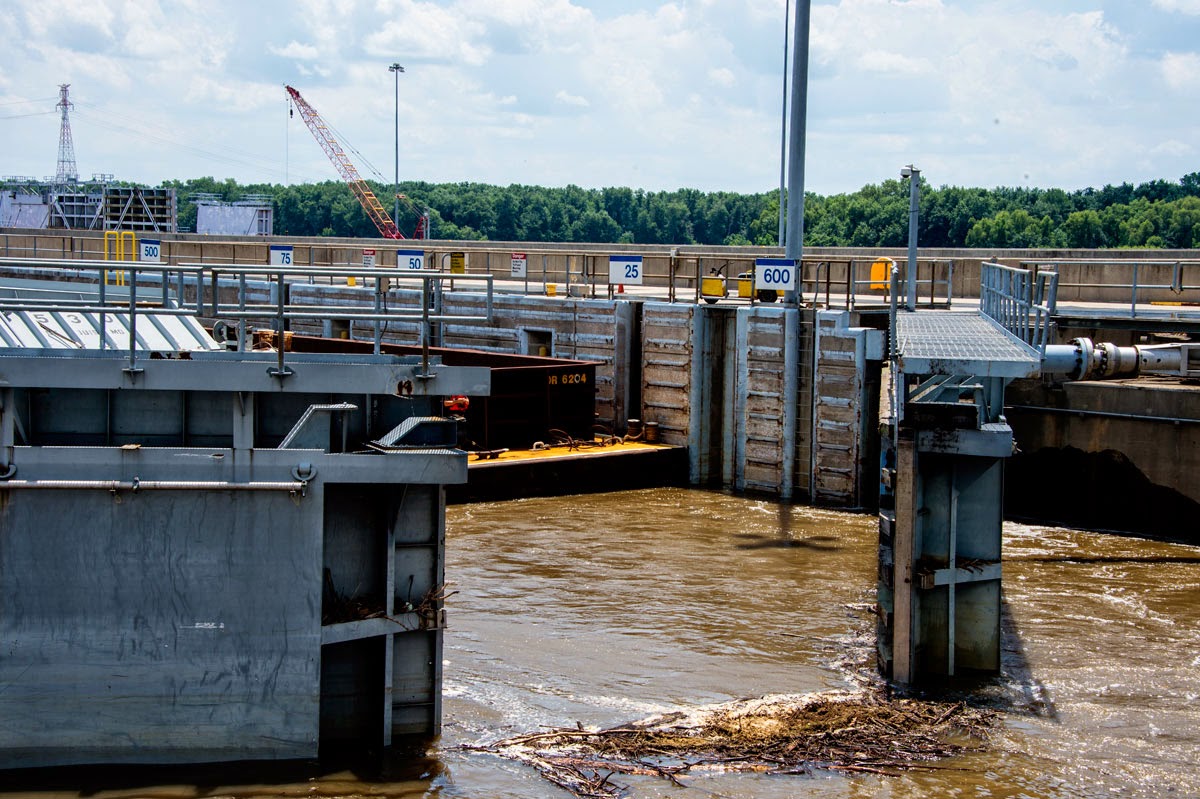 W a a a a y y y  up high on the very top of the dam,  we could see the gates close on the second half of this load. 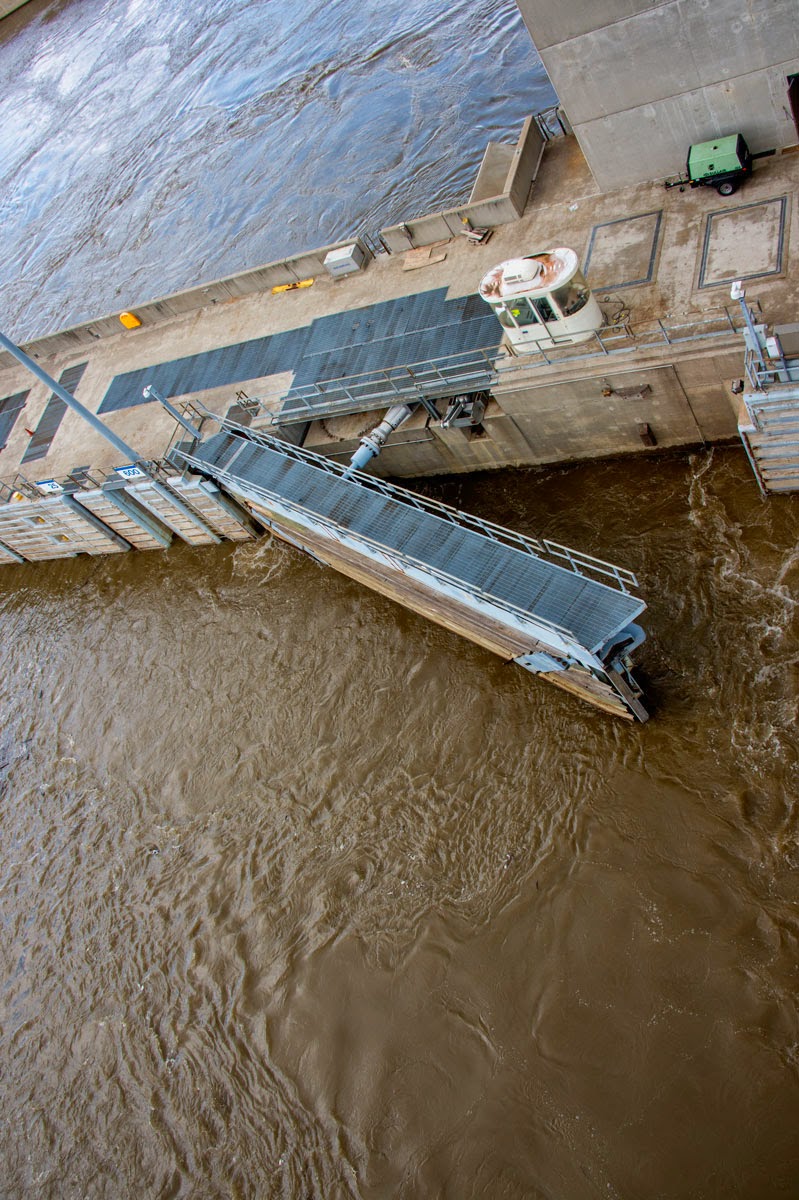 The barge to the left of the tug has stainless steel scrap .. the middle has coal, as does the right front, and right of the tug is rusty metal scrap.  The covered barges probably have corn or soybeans with each barge being 10 feet deep.  This entire process is run by one guy pushing buttons ... he doesn't even walk across the gates ... he rides his golf cart EVERYWHERE!! 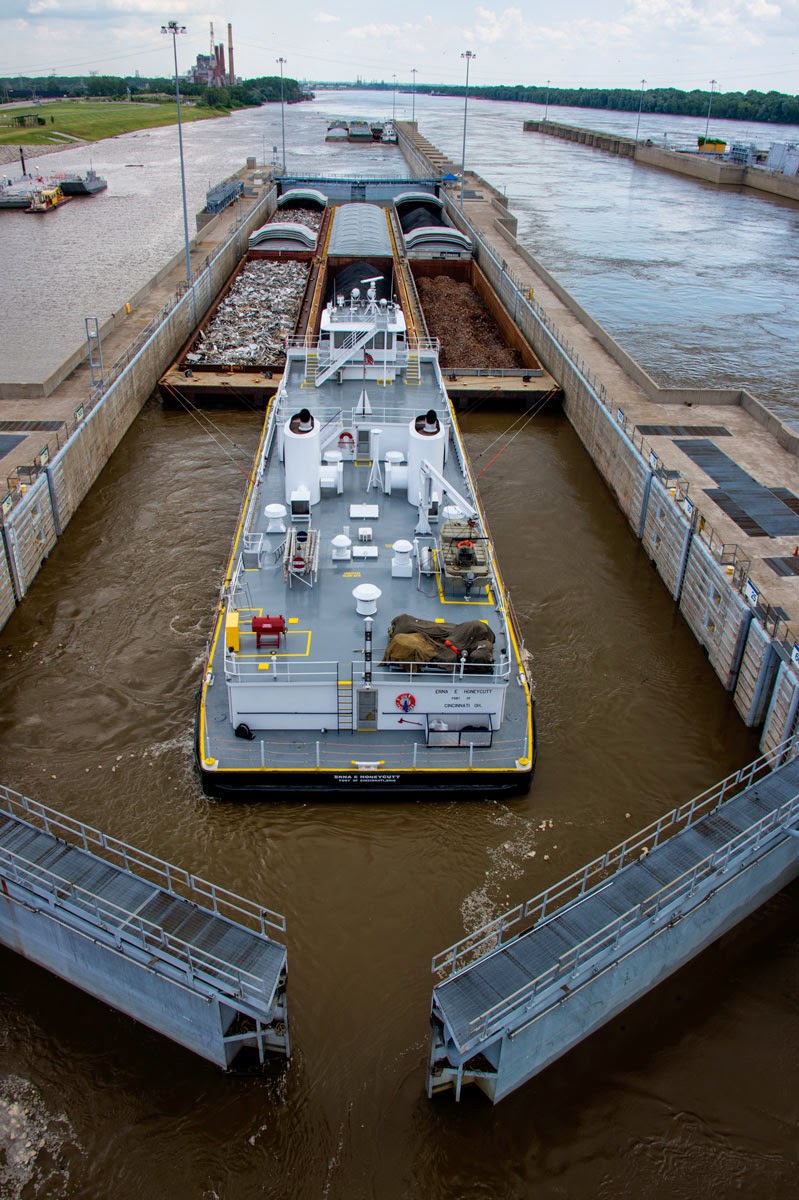 The short lock is on the left, the long one under repair is on the right with the Mississippi River running wild right down the middle.  The flood gates are totally open with a "let her run" attitude to keep from flooding locally. 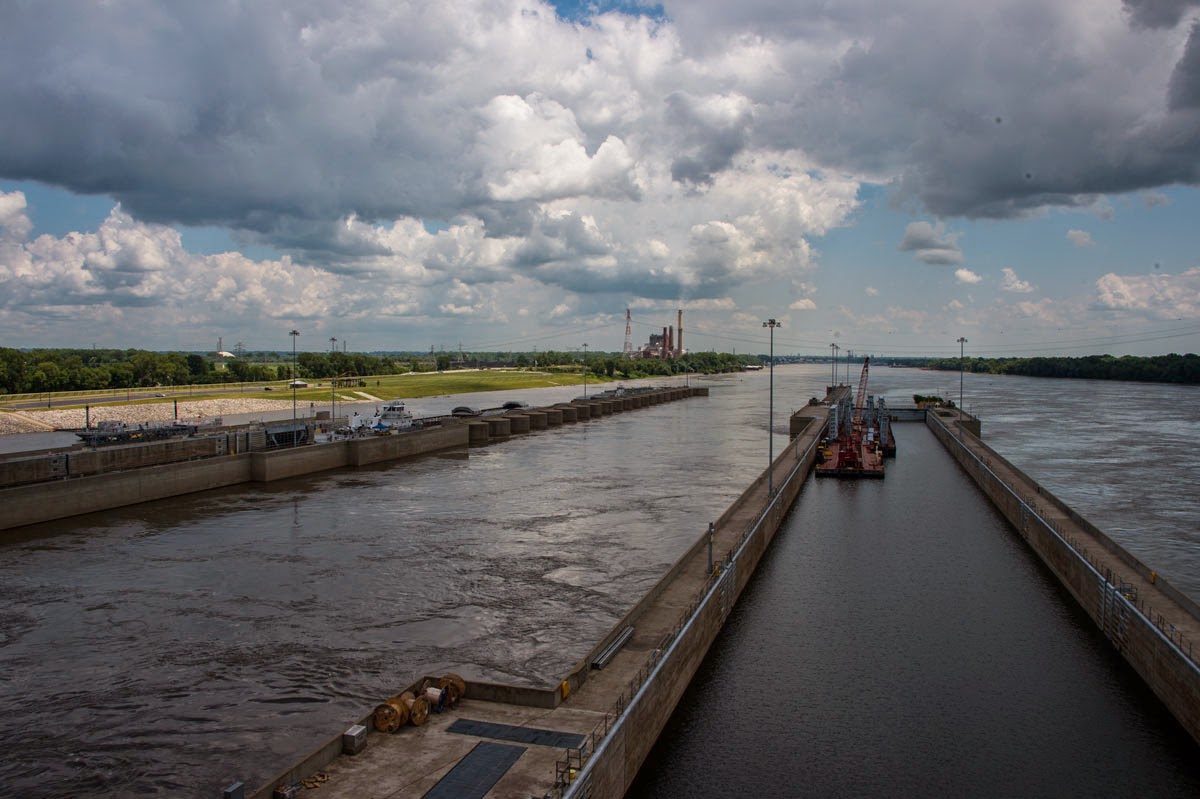 This is the river level looking downstream and to the right of the locks where it has flooded its banks, the fence, telephone lines and road.  At the time of our tour, the guide said the river had peaked today, so hopefully there won't be much more flooding. 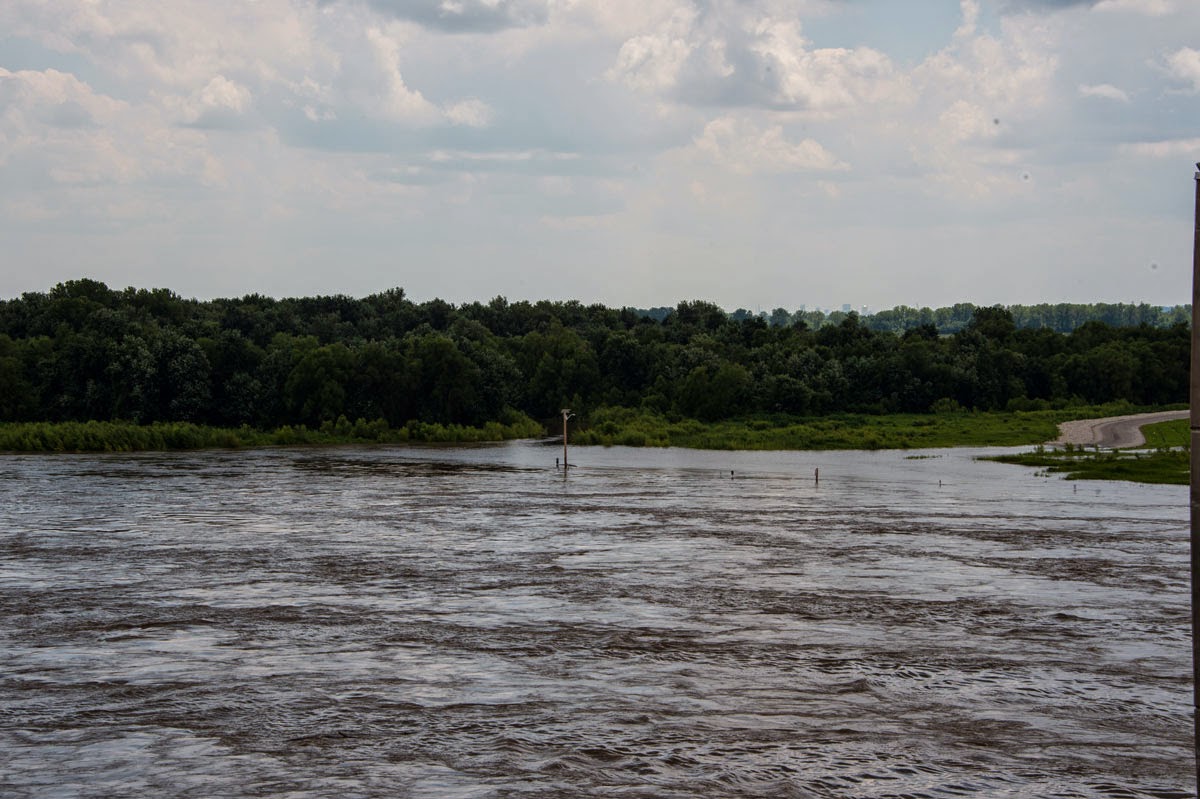 On the way down, another barge set came in with liquid of some sort.  The guide said benzene was the usual, but this one had no signs other than No Smoking, No Open Lights and No Flame.  I think I would need hazard pay to work on this one!! 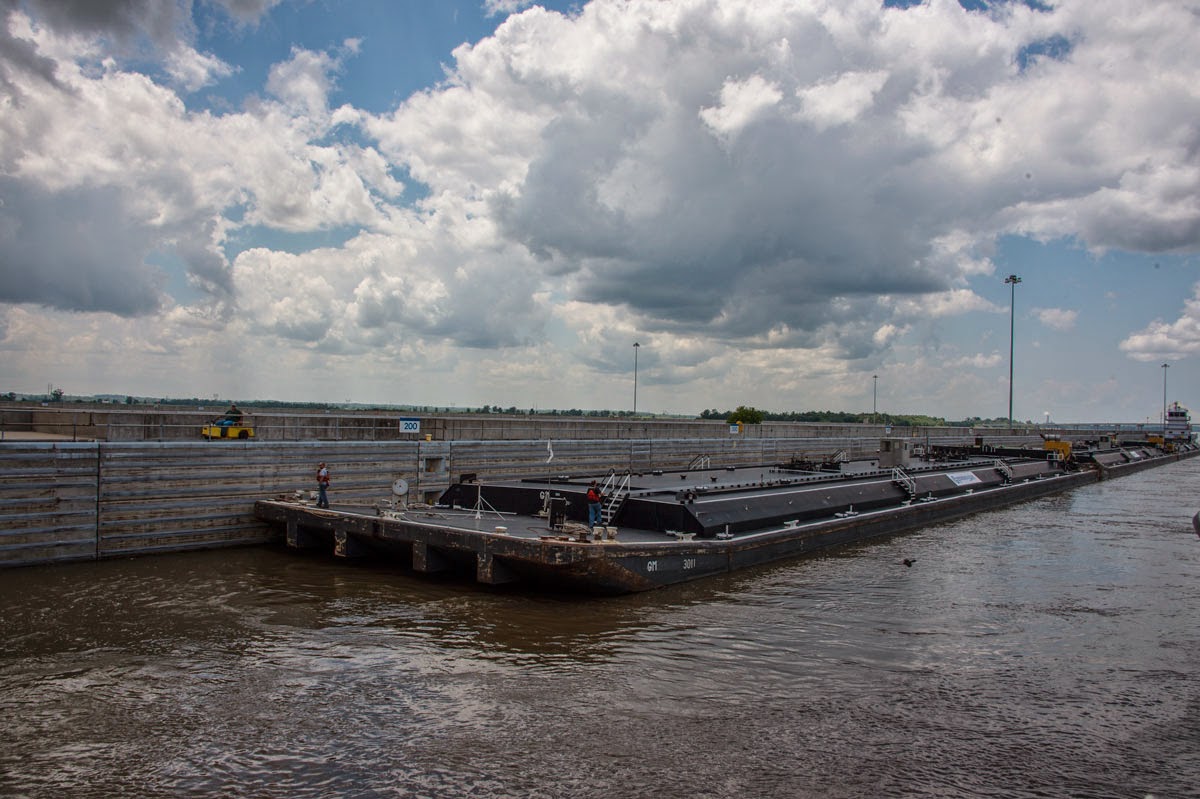 We were so fascinated with the locks, we almost didn't have time to visit the Cahokia Mounds.   We made a quick stop at Fast Eddies Bon Air (because "everybody goes there"), the bar that moves the biggest volume of alcohol in the world, for some wings and a burger and made a fast exit South.

These mounds were built and occupied between 800 and 1400 ad by the local tribes.  Unlike other mounds, they didn't live in them, but around the outside in huts, making for few artifacts. 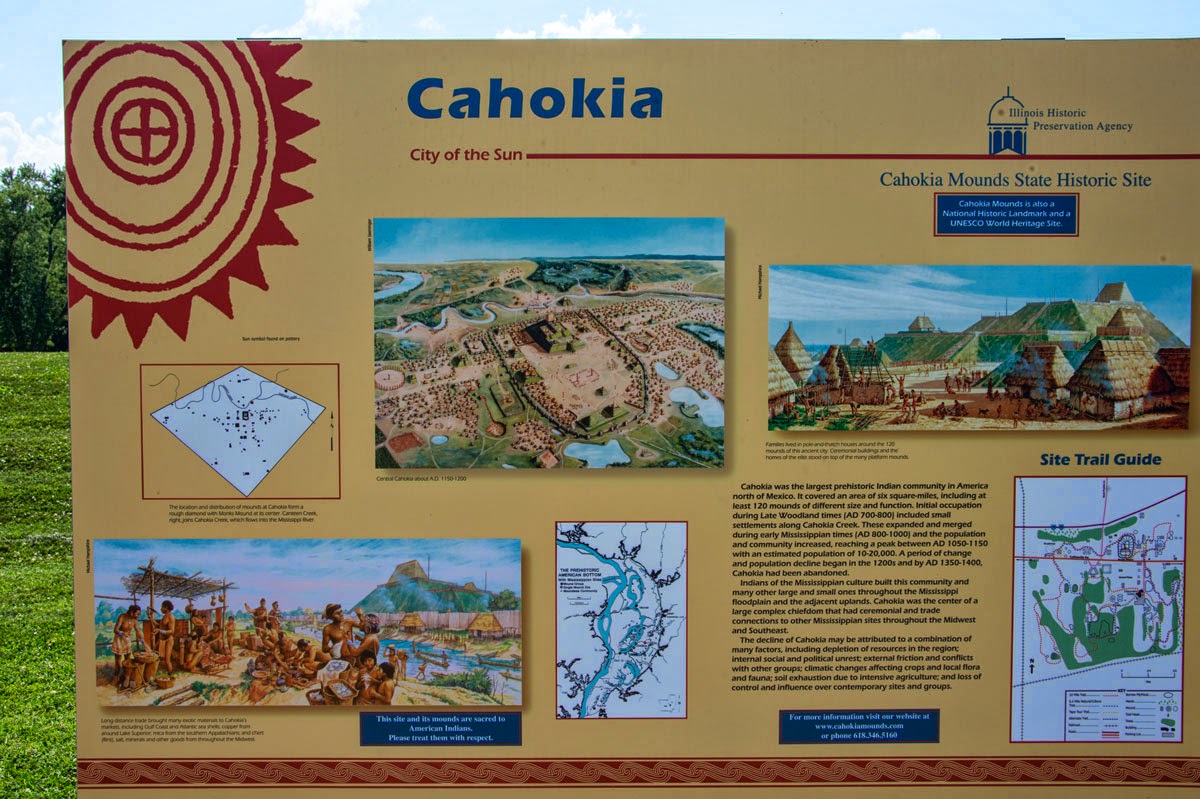 Since no one knew what they were, many were bulldozed, including some to make way for the railroad.  This image simulates life at the mounds.  The King lived in his shack at the very top of the mound so he could talk to the spirits easier.  This is the largest archeological site in North America, now a State Park. 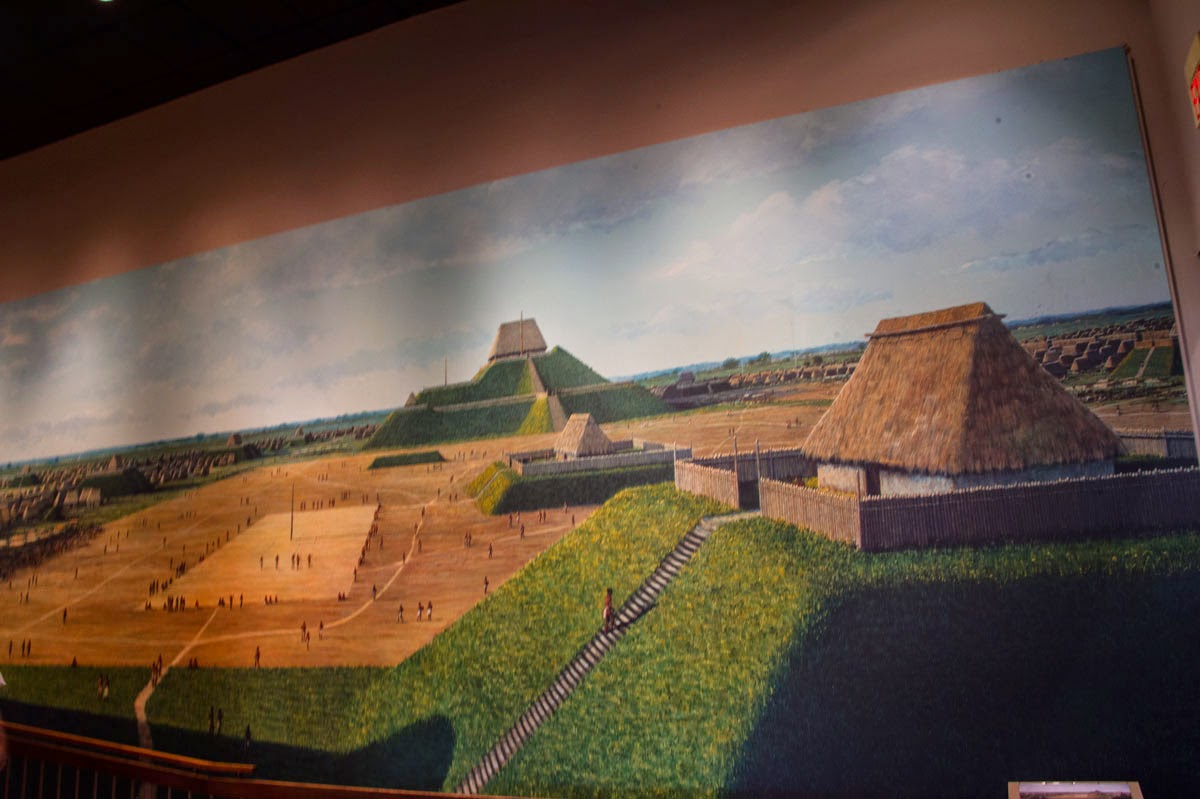 The museum here talks about not only Cahokia, but other Mississippians ... tribes that lived in this land of plenty, with fish, deer and plenty of trees for building.  As with other civilizations, this one moved on for reasons unknown. 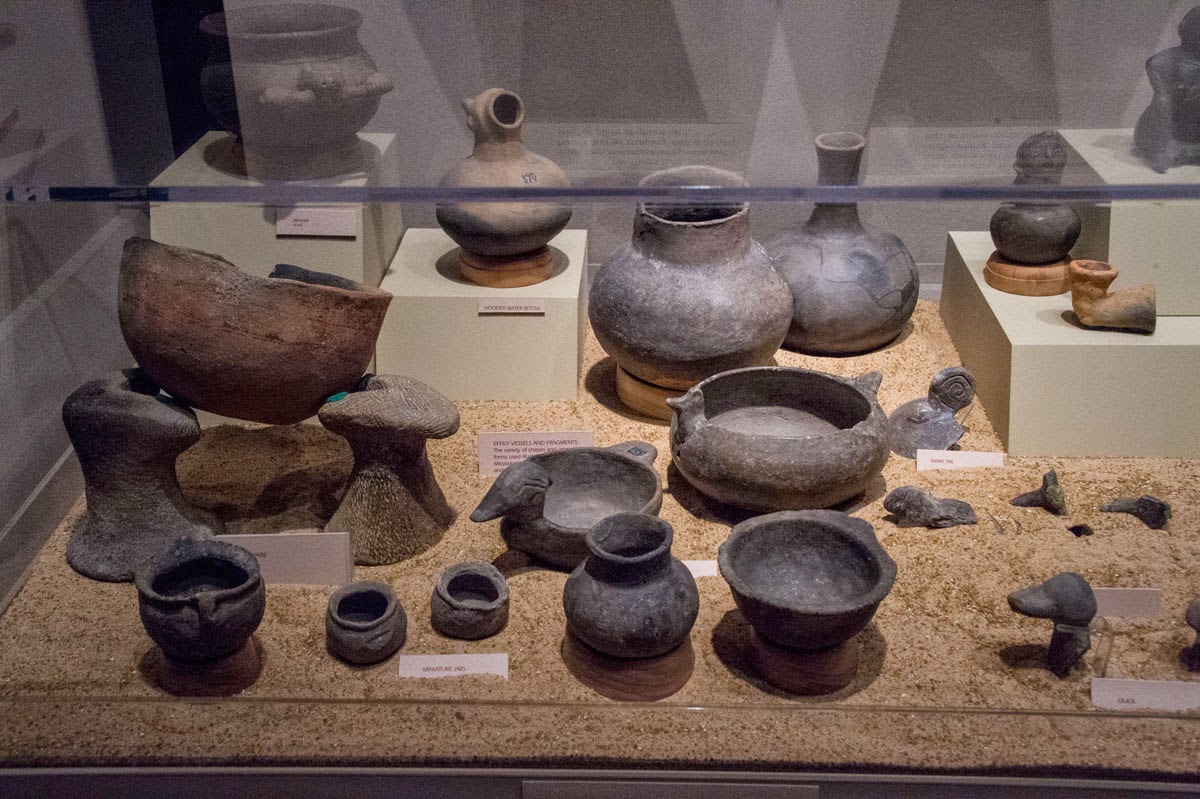 That was it for the day ... almost anyway.  When we returned to the rigs, I had a washer full of water to drain.  The question was whether I wanted to syphon and risk a mouth full of dirty laundry water, or dip with a bowl.  Dipping won, and I soon had most of the water out.  That done, I called the Warranty Department .. not that it's under warranty, because it is NOT ... but they had a Tech there that helped me determine that the pump wasn't working and gave directions on how to dismantle and check it.  Instead, I asked for a serviceman in Springfield, which believe it or not, there was!!  I called around 6:00 pm, not realizing I had his cell phone number, to find he was in Florida!!  The good news is he's flying home today and hopefully can check it out Friday or Saturday.  Another amazing piece of luck ... just as I was talking to him, the machine clicked out an error code of F-05.  After a quick on-line check (you can find anything on the internet) I discovered there is probably something blocking the pump propellers.  At any rate, Roger says he can fix it, but at what cost??

This morning we pack up and head to the Fairgrounds at Springfield, Illinois.  We're off to further adventures!!!

Posted by Nancy Kissack at 5:12 AM