When it comes to ordering in restaurants you have never tried, you never know what you're going to get.  It helps if your friend Nick Russell has stopped here and added it to his list of good places to eat ... or maybe nixed it altogether.  Neither was the case for today's lunch!!

We heard the Farmers Market was open Saturday mornings downtown.  It didn't take us long to run out of the last batch of sweet corn and delicious red tomatoes, so this was our first stop.  Everything sold here has to be grown on an Illinois farm.  There were people here from over two hours south selling delicious cinnamon sugar pecans, honey, LOTS of corn, squash and tomatoes. 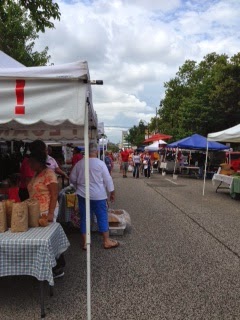 Our bags weighed down with veges, we drove over to the old Railroad Station where Lincoln left for Washington DC when he was elected President.  The last time Tom and Barbara were here, it was a huge construction mess.  The building and grounds were completely renovated and will be used for small commercial businesses ... like a mall.  It surprises me how they can rebuild these structures just like they were 100 years ago.  I didn't think there were any craftsmen left to do the detail work. 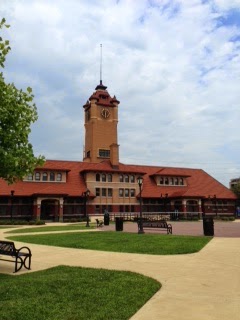 Apparently there are some in Springfield however ... or maybe they ordered these grates from somewhere else ... but the scroll work is amazing!! 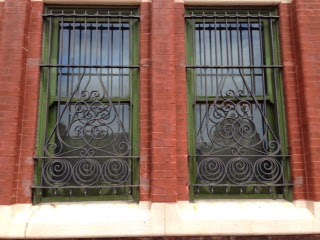 In the same courtyard area are two strange looking statues.  You definitely have to read the plaque to figure this one out.  Any idea what they represent? You give??  Okay ... burnt chimneys.  I didn't get it either ... the scenes depicted on all four sides didn't help any.  Apparently over 100 years ago there was a race riot here ... someone accused someone of rape and several black people were hung and houses burned.  In the end, the accuser lied ... but it was too late to change the outcome.  I don't understand the sentiments here ... maybe it's being from California, or maybe my parents just taught me everyone should be treated the same.  At any rate, Springfield residents wanted a reminder, so there are two of these chimneys ... one actually has a Michelle Obama likeness cleaning up the mess from the riot.  Least that what I read the sculptor said!! 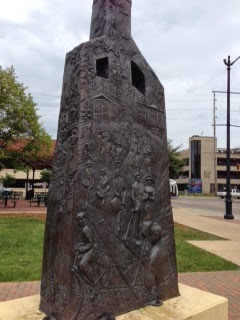 Then came lunch at LaCalia, just down the street.  A small bistro-type cafe, they advertised a smoked peach green salad with blueberries.  Thinking we were going to the "Taste of Downtown" experience that evening, I opted for the salad, while Barbara had scallop tacos and Tom the best looking, best smelling corned beef hash I've ever seen!!  They won, I lost!!!  When the waitress told Tom he could have his eggs (with the hash) any way except scrambled because the chef doesn't do "scrambled" ... I should have taken the hint and changed my order.  At any rate, I didn't get the mango vinaigrette I asked for, but a horseradish vinaigrette!!!  Sorry, but that's not even ON my list of edible things!!  The smoked peaches had no smoke flavor at all ... not that I could really tell after eating all that horseradish.  In an attempt to calm it down, I asked for some bread ... it came plain, no butter, for $1.79.   On top of that, my horseradish salad was $9.00, even though the board outside said $8.95 ... not that 5 cents matters ... it's just the principle!!  Next time order the corned beef hash!!!!

Later in the evening, we figured out the Taste of Downtown was going to cost us much more than we were willing to pay ... so a quick check of Yelp landed us at Sam's Italian Pizza.  Now THIS is good food.  The review said to check out the walls lined with every Italian political figure, boxer and mob boss ... must mean it's REALLY Italian.  You probably wouldn't pick this driving down the street ... it's a dive ... but boy was the food good!! 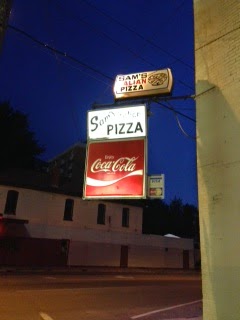 My Hawaiian pizza was excellent with amazing sauce.  VERY much like Miss Terry's recipe.  Tom had lasagna that tasted of Italy.  The herbs in the sauce were perfect ... not harsh or sharp tasting ... lots of meat sauce ... THIS time we ALL won!!! 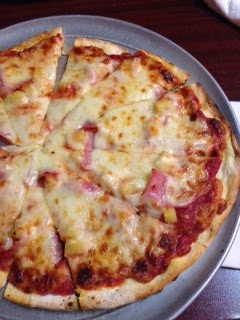 My washer repair guy is due any time, so I'll cut this short.  It's going to rain all day, so I think this will be a stay-at-home day with the puppies!!