What could they possibly have in common??  They both spent time in Springfield Illinois, although they never met, as Mr. Lincoln died before Wright was born.

We began the day at the Dana-Thomas house, whose Architect Frank Lloyd Wright was hired by Susan Lawrence Dana to build the nicest party house in Springfield so she could have elaborate parties.  With an unlimited supply of money from her father's silver mines in the West, she gave Mr. Wrigh free rein to design whatever he wanted, with very few exceptions.  I have to say it is beautiful, although definitely not my style.  The woodwork and stained glass windows are spectacular, but the floor plan rather convoluted.  I think it would take a map to guide you if you lived there. 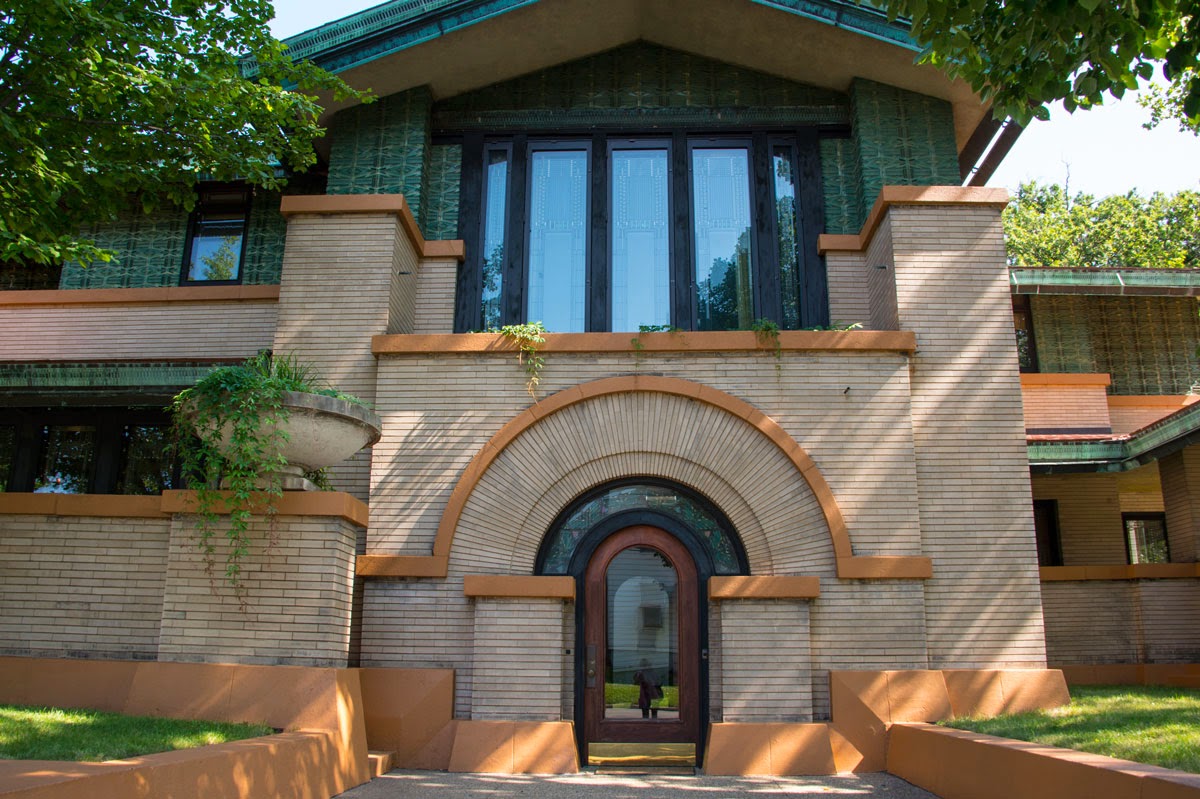 I wish I had some beautiful images to show you of the interior, but they don't allow photography.  The reason given by the Foundation Representative in the gift shop was that since the entry was free, no pictures were allowed, even though the first thing you see when you enter the shop is a big sign saying Adults $10 each ... and in much smaller letters ... donation.  At the same time, they said there was no money for advertisement.  Even if it meant FREE advertisement, no pictures were allowed. 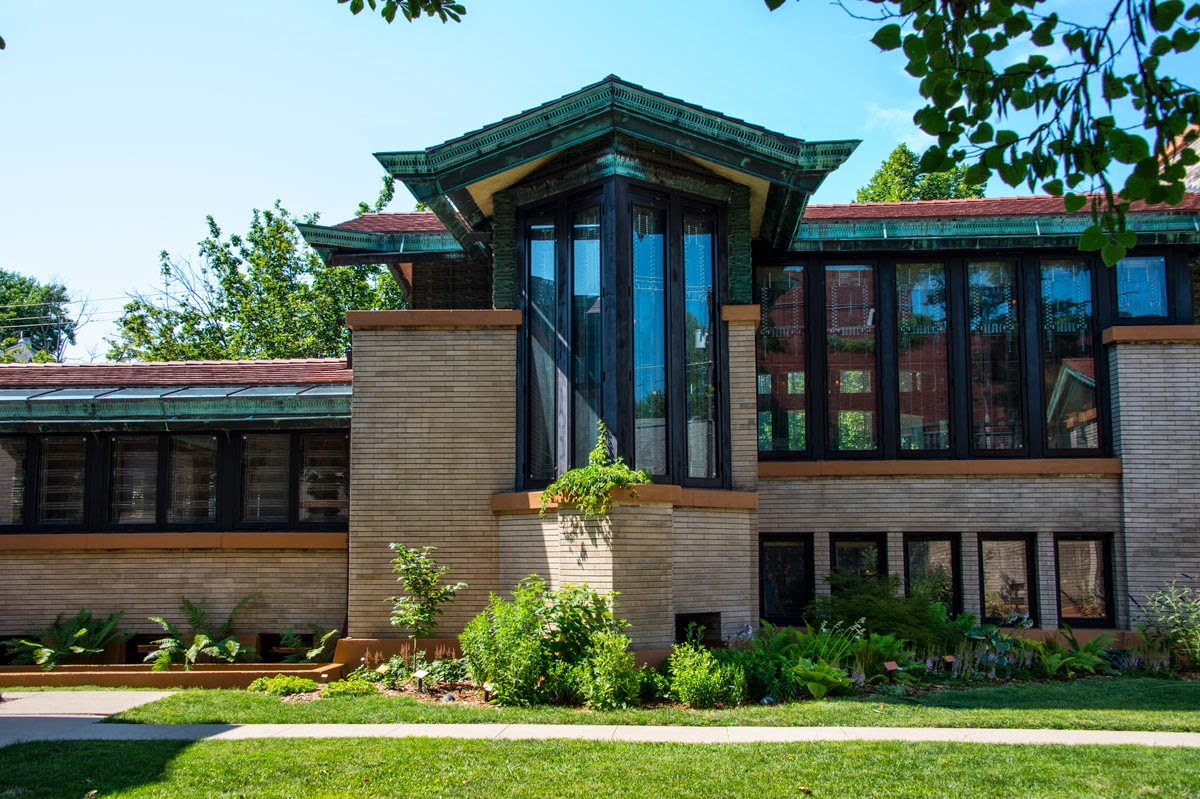 So here's one very pixelated image from the internet, followed by a nice one of the three chandeliers that hang in the home. 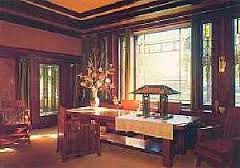 All of the furnishings were designed by Mr. Wright, including the bowling alley in the basement.  If you are a Frank Lloyd Wright fan, you will probably love this early example of his style and the pricey gift shop that comes with it. 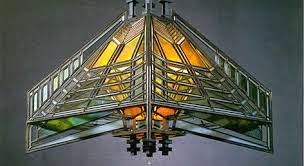 On to the most popular home in Springfield ... Abe Lincoln's home when he married Mary and before he became President.  He purchased it for $1500. 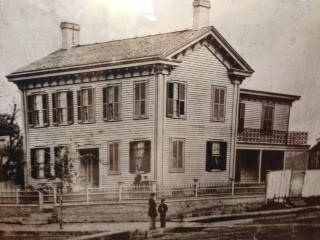 Here's what it looks like today, as renovated by the National Park Service.  The tour of this house is free also ... just go early to get a ticket, as they are VERY busy ... and you can take as many pictures inside as you want!! 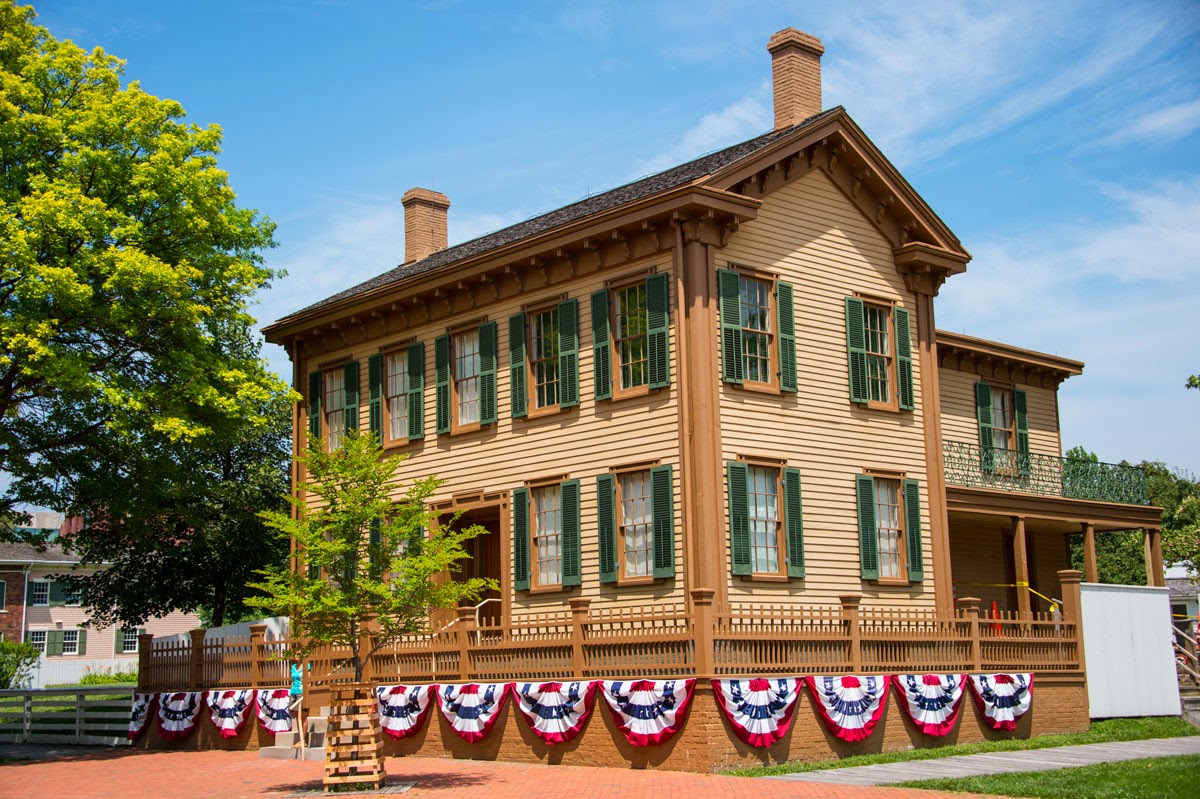 The National Park Service has purchased all the buildings for a couple blocks in each direction, preserving the neighborhood he walked in daily.  Mr. Lincoln became a circuit lawyer, traveling around Illinois, making lots of money (allowing him to buy nice furnishings for Mary) and a good name for himself. 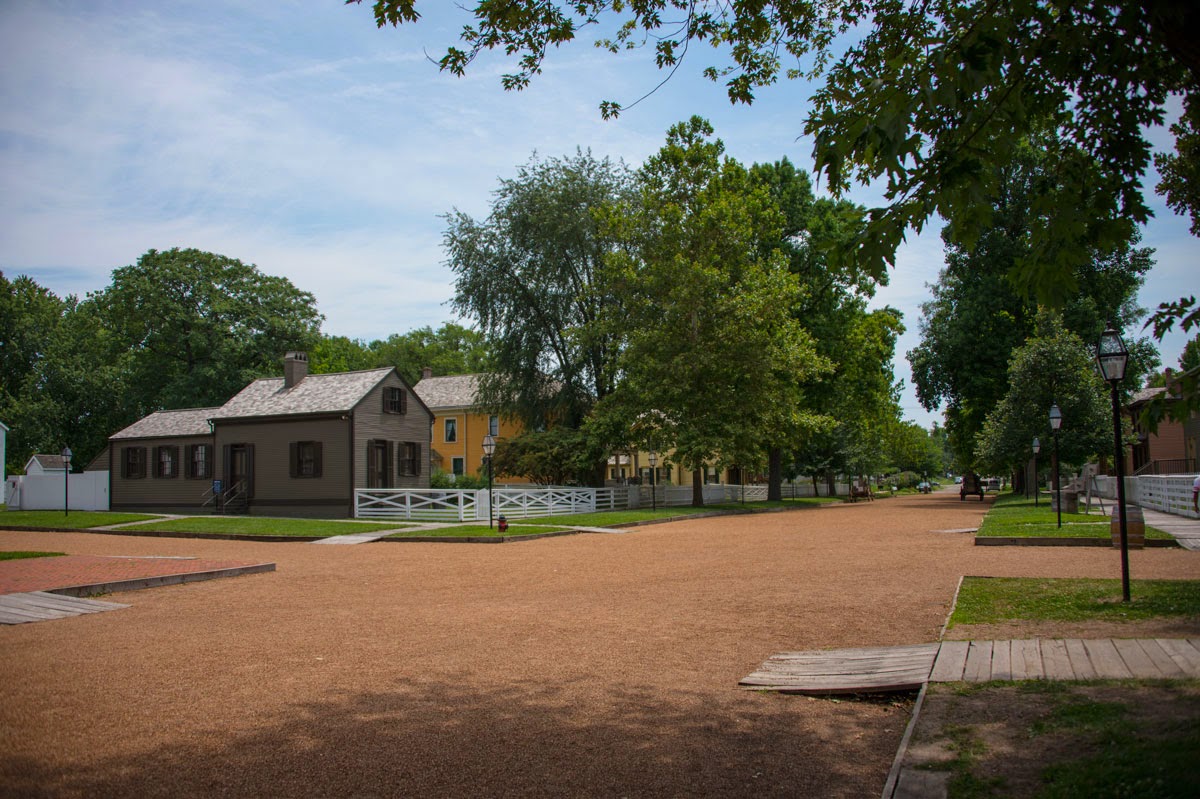 This is the formal living room where guests would be entertained.  They say that the kids and the dog weren't allowed in this part of the house, as they might break some of the more expensive expressions of their wealth and standing in the community. 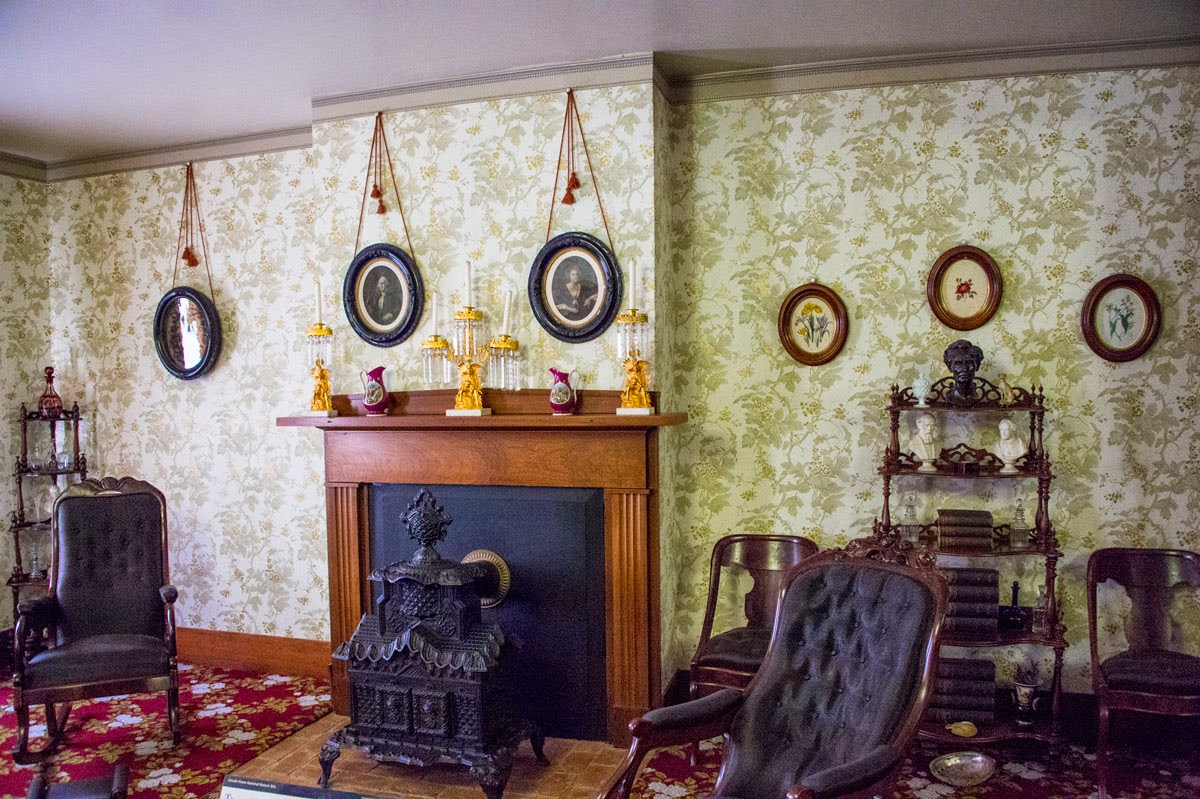 As we walked from the no-kid zone to the back of the room, you can see where Lincoln's office was and where he met with the politicians when he was told he won the nomination. 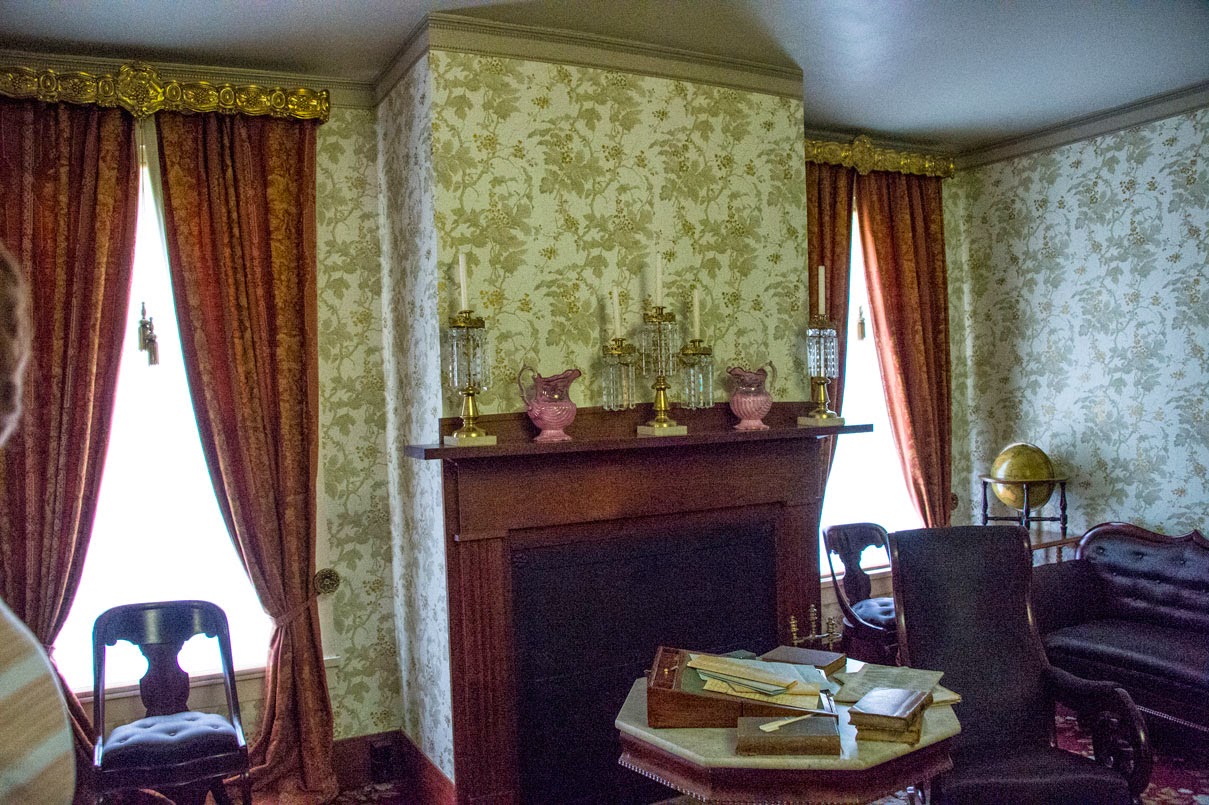 Some of the furniture in the house is original to the Lincolns ... the rest are pieces from that period in an attempt to keep it accurate.  This is the family room where Lincoln could lay on the floor and play with both the kids and the dog ... although they say he was really a CAT person!!  This is pretty crazy carpet and wallpaper!!  You can just imagine the weight of the nation being on his mind as he walked through these rooms. 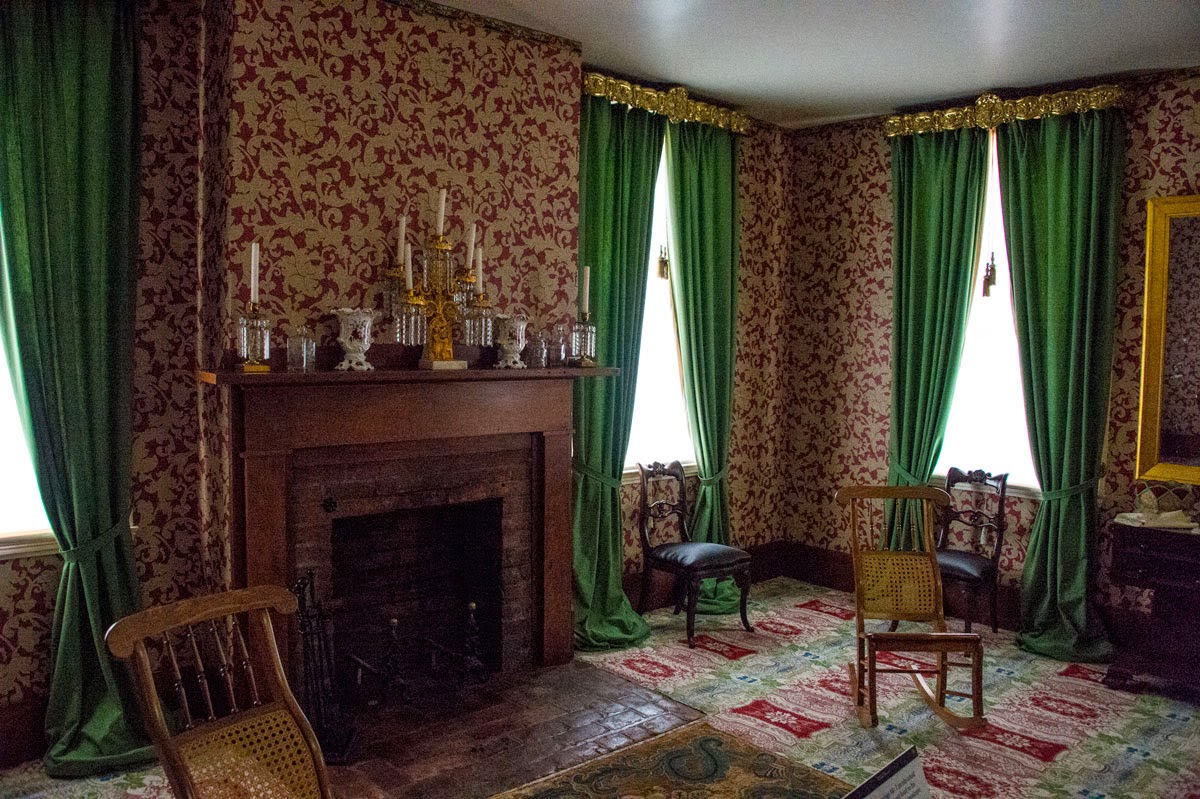 Gosh darn I don't remember who this room belonged to.  When you're with a group of about 16 people and they are rushing you through, talking the entire time, it's hard to concentrate on both photography and the words they say!! 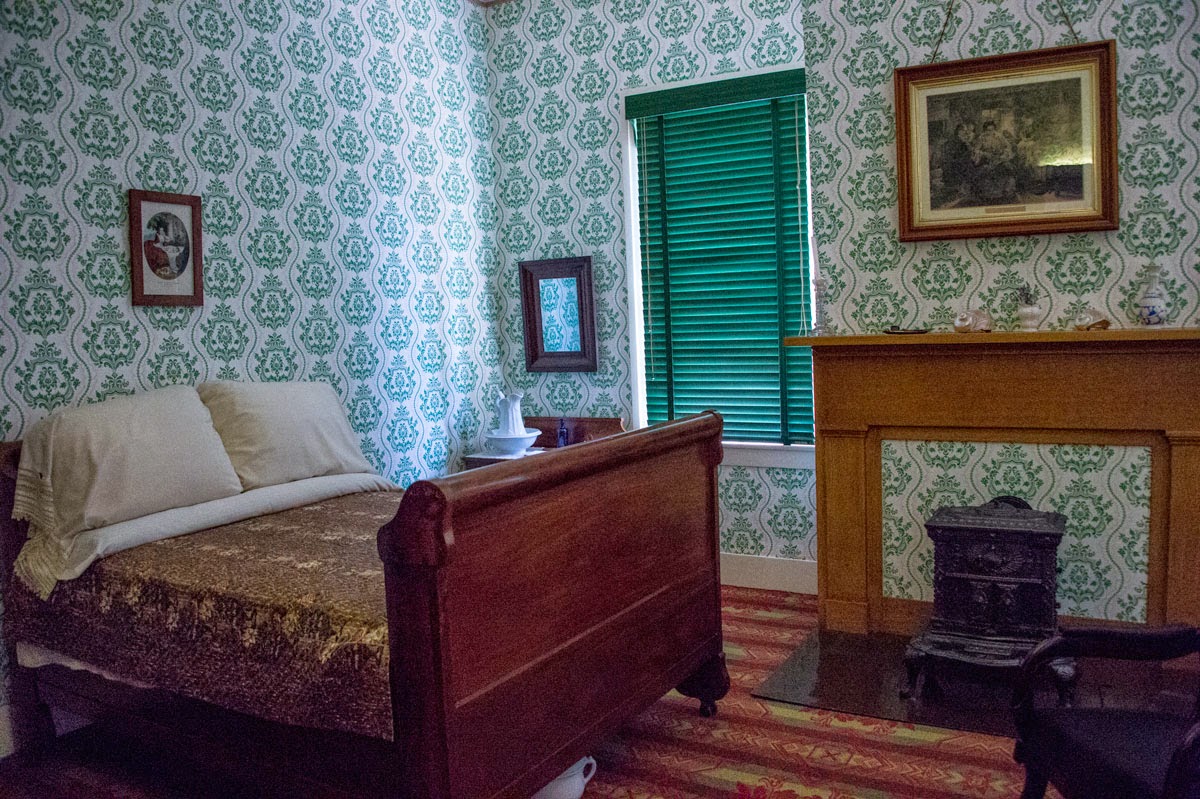 So I'm pretty sure this was Lincoln's bed.  Probably not the bedspread I would choose to go with the wallpaper .......  I think they could have used a decorator!! 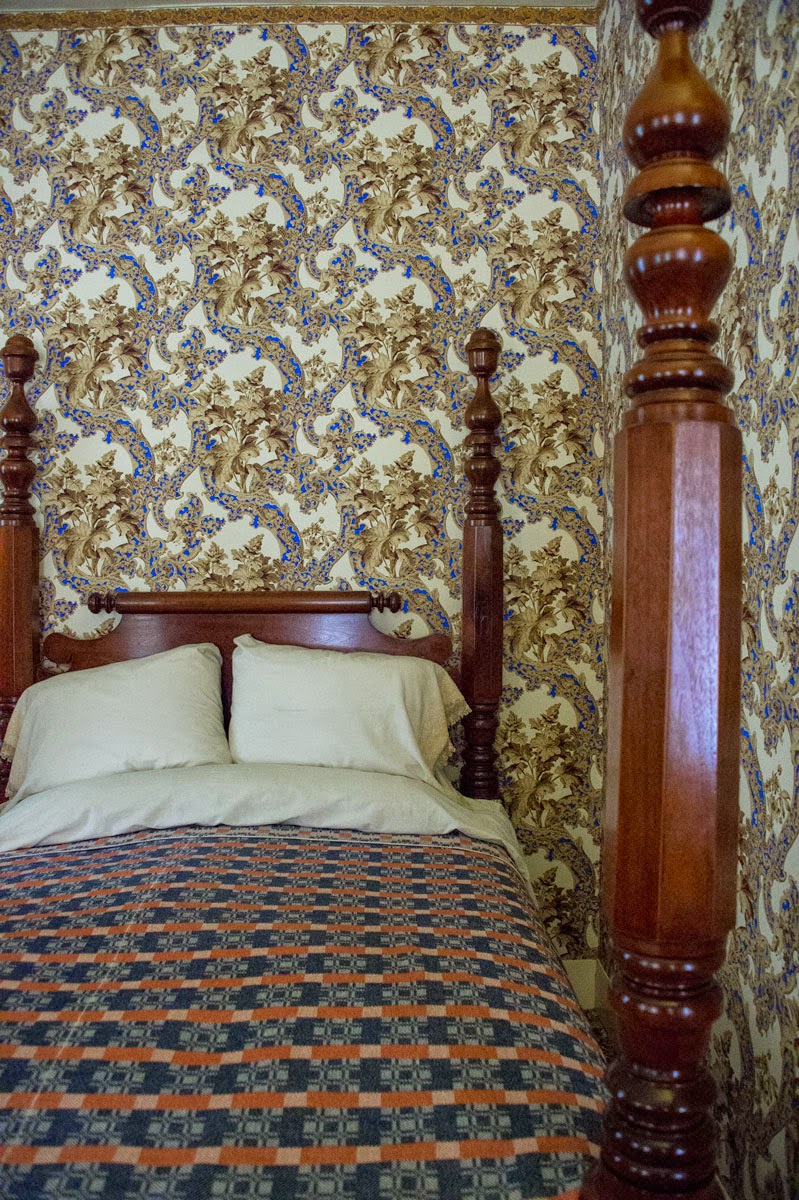 I definitely know she said this was his original wardrobe and dresser.  He stood here every morning as he dressed for the day. 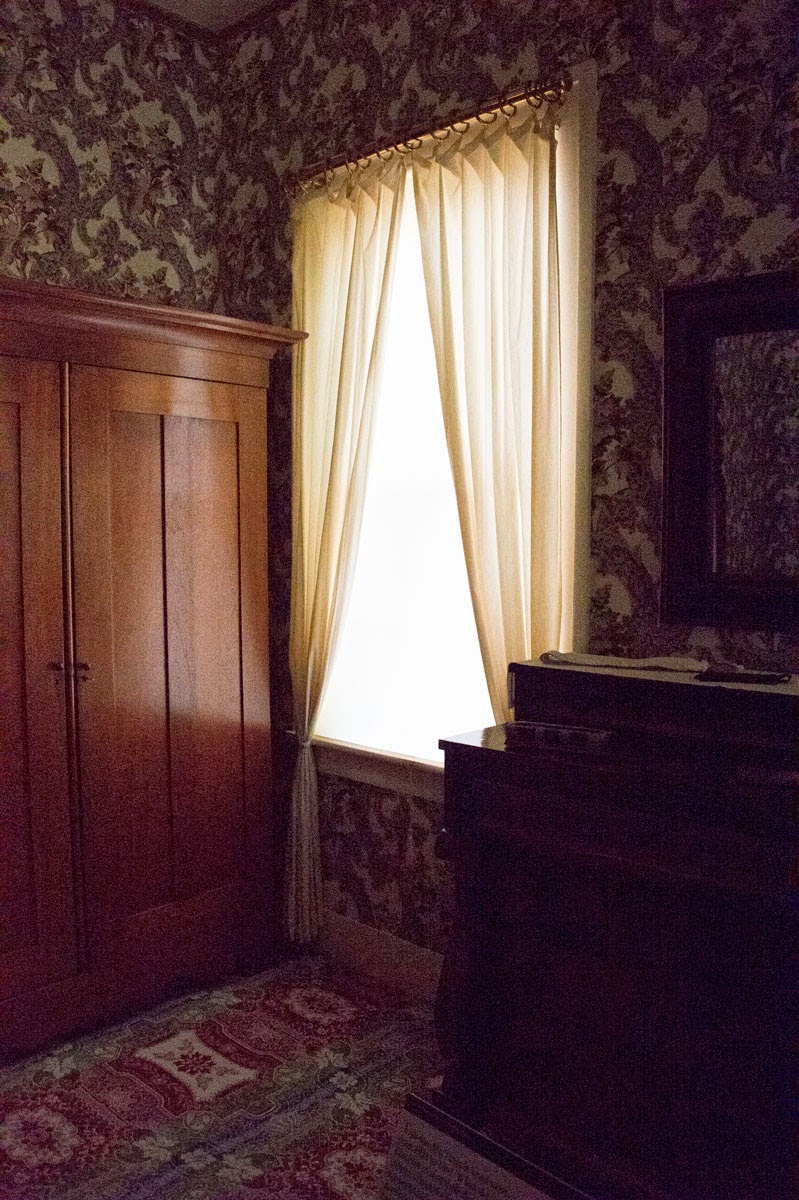 This was Mary's bedroom ... not because they didn't get along, but because two bedrooms showed your status!!  Besides, the beds really weren't big enough for two!!  They say Mary suffered from migraines ... I think living with this wallpaper and carpet, I'd have migraines too!!  This paper was reproduced from the original found in the house and is really pretty amazing! 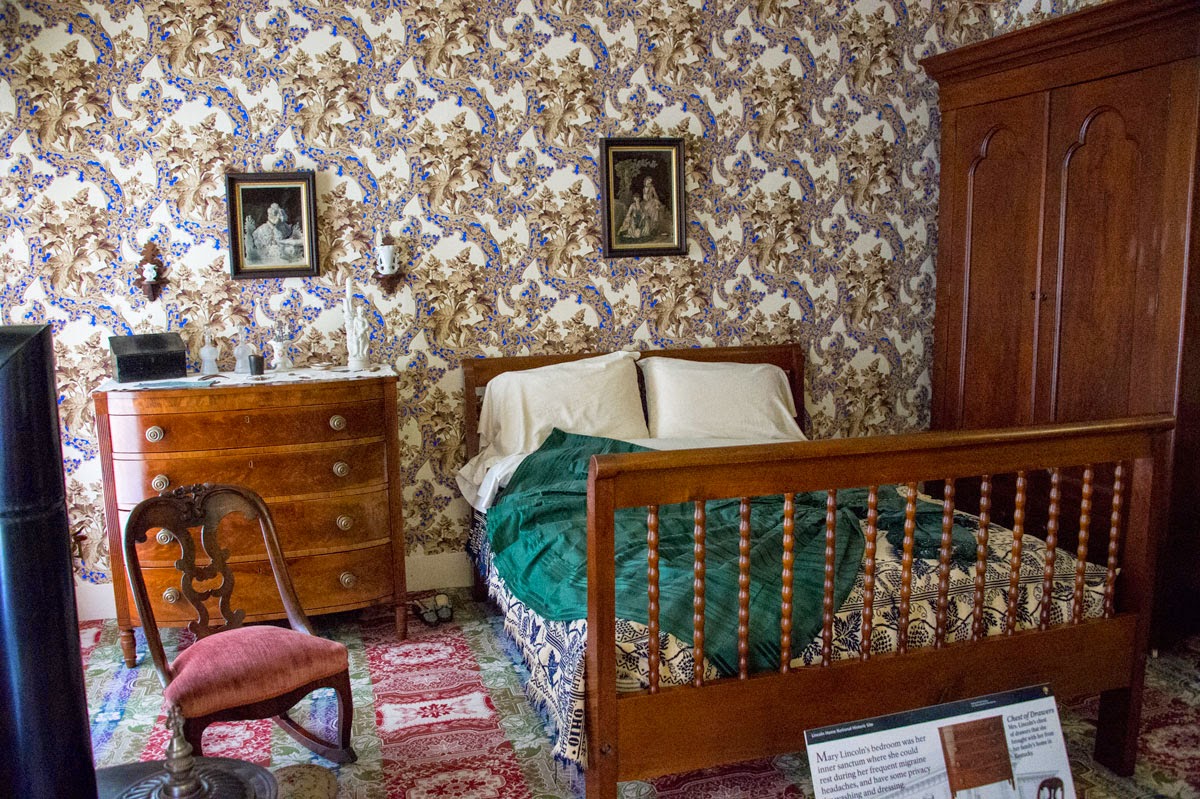 This is the sink side of the kitchen ... a VERY small area to cook in.  Mary came from a rich family that had slaves and servants to cook, so poor Abe probably ate some not-so-great meals until she got the hang of it. 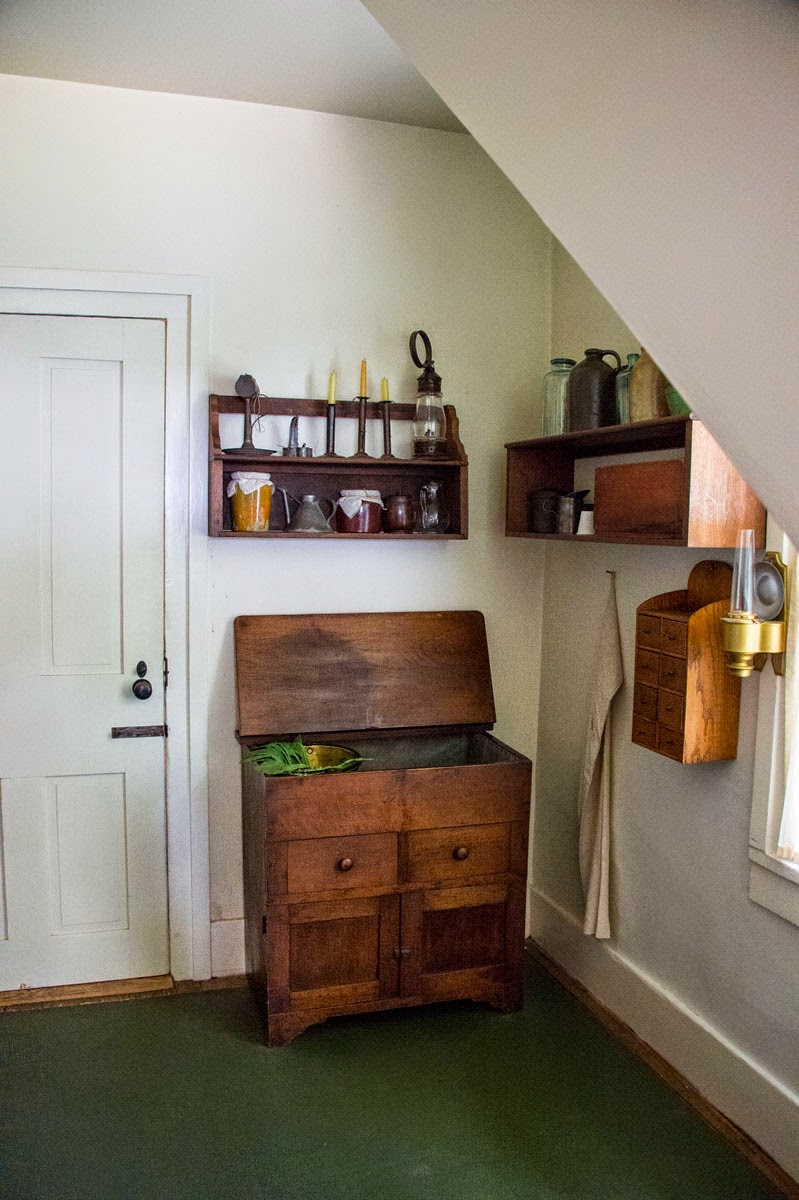 They did have one servant who lived in the house and was paid to help cook and clean.  This is the original stove Abe bought Mary ... and she loved it!!  I know you're curious ... yes, they had their own three-holer out back by the barn where the cow and chickens lived.  Mary had her own commode in her bedroom. 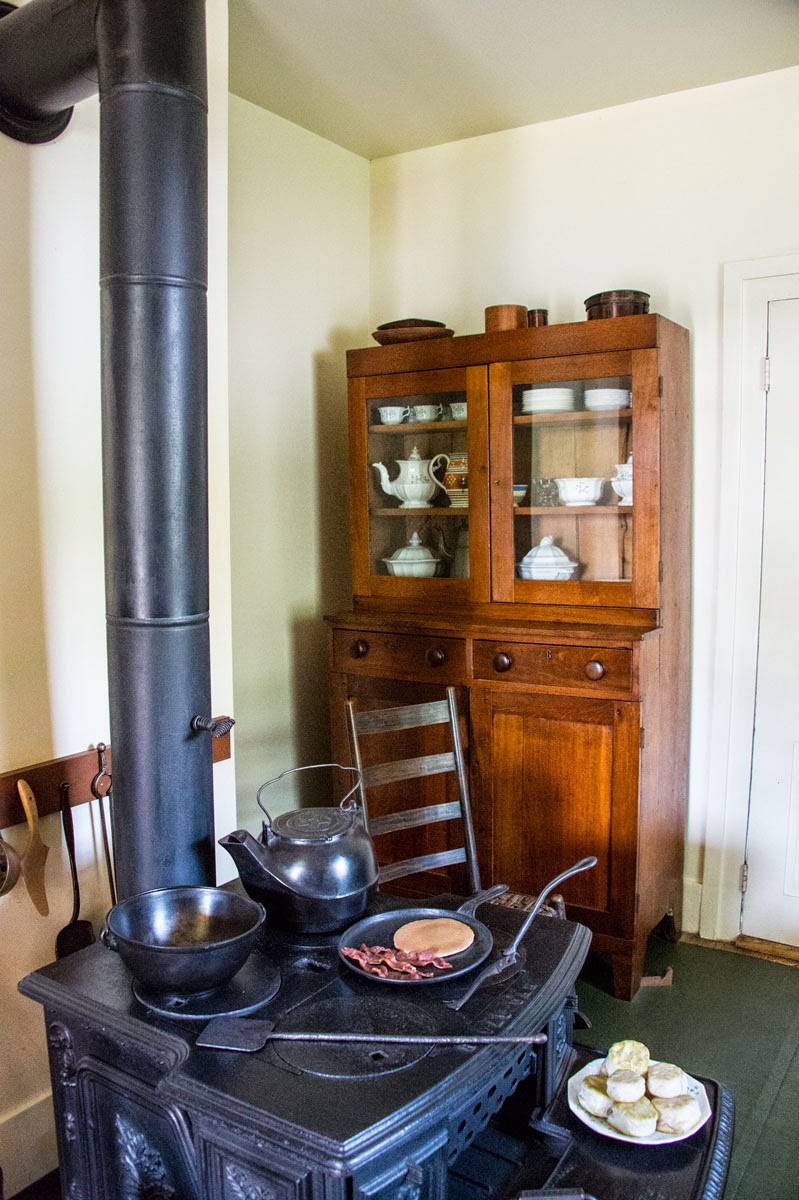 Outside the neighbors were snacking on the lawn. 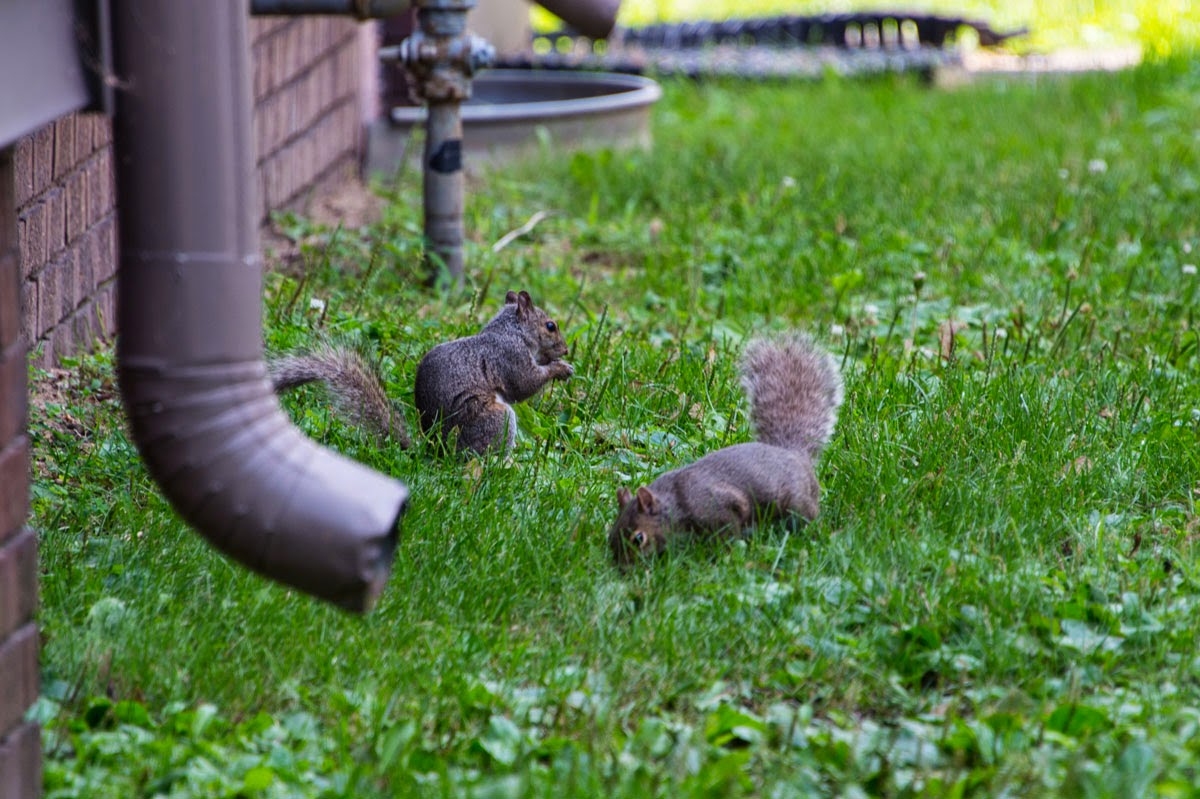 The first non-motor home??  This Lincoln Log cabin was pulled around in the day to advertise Lincoln for President.  By the way, did you know Lincoln logs were invented by Frank Lloyd Wright's son??  Just a little interesting tidbit!! 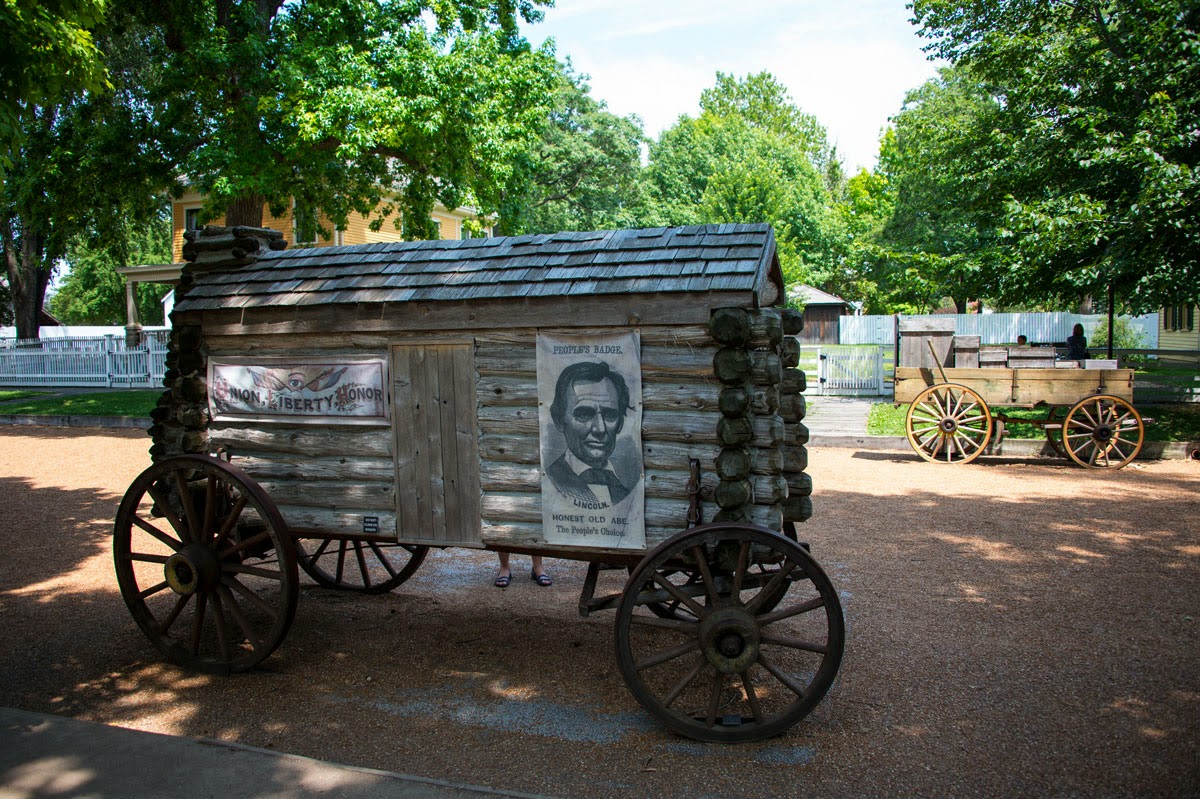 From his home, we headed to the cemetery where Lincoln is buried.  Apparently some ruffians decided to kidnap the body way back when, so this huge monument was built over the top of the original burial site.  A few years later, the foundation collapsed, causing it to be completely dismantled and rebuilt as you see it here.  Lincoln is now buried ten feet below in a concrete and steel sarcophagus. 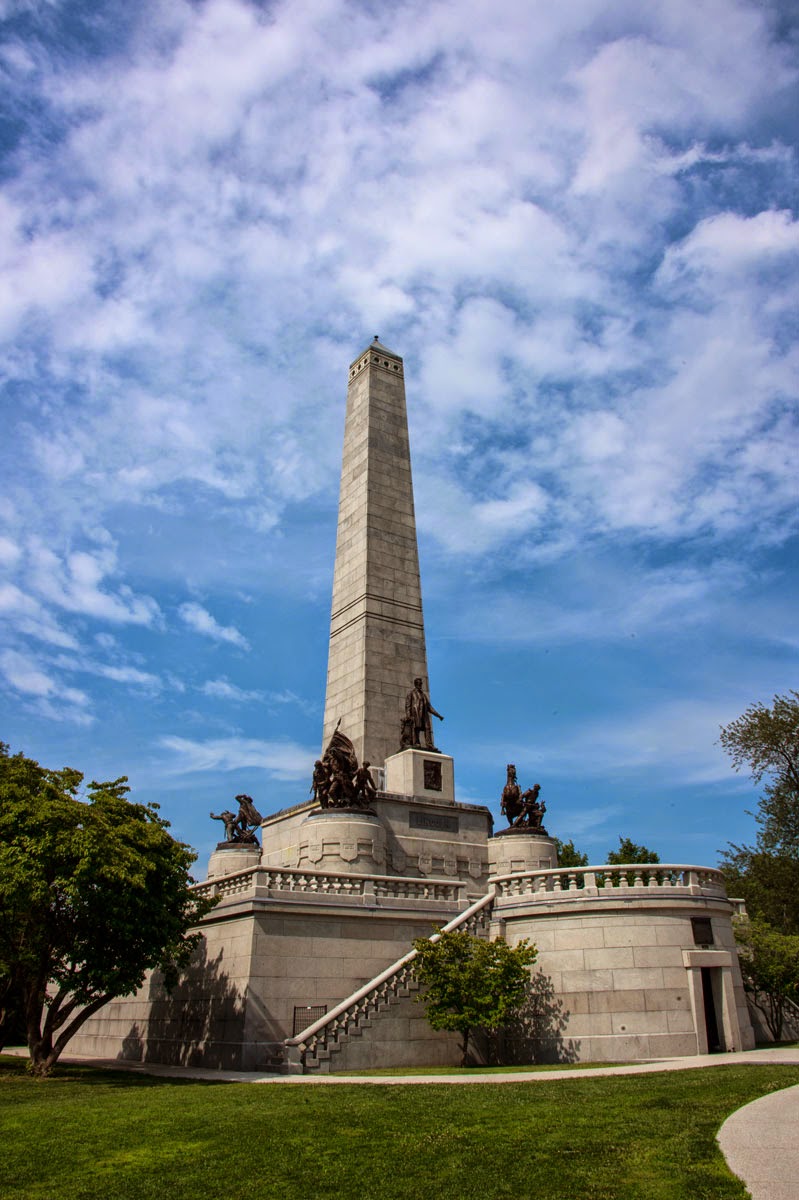 As you enter the front door, this is the first bronze you see.  There are many many more as you walk around the hallway to the site of the burial, then around the other side back to the front door.  You can see on this one, and several others, where people have touched his knee so much the bronze is wearing. 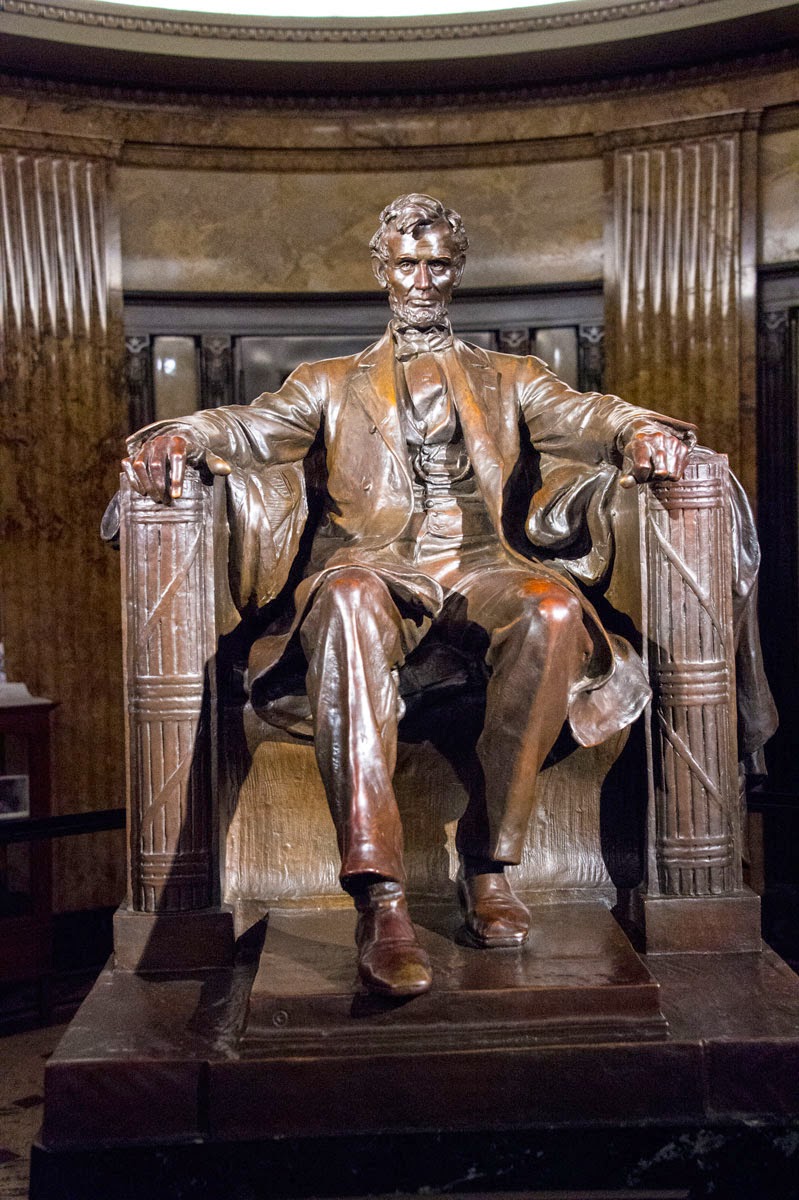 The hallways are decorated with the most beautiful pink marble I have ever seen ... 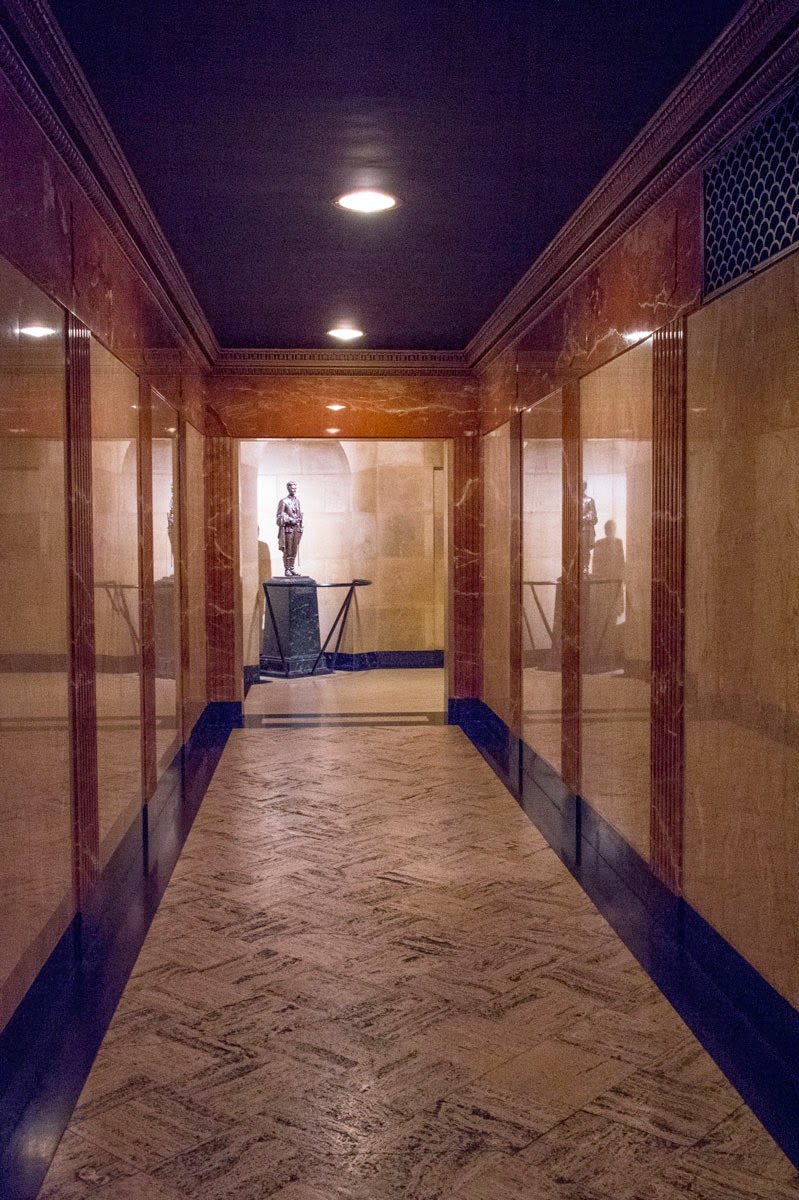 The actual burial site is below this tomb.  Mary Todd and three of their children are buried directly behind me as I take this picture with Mary outliving all of them.  The only remaining son is buried in Arlington National Cemetery.  He lived to be 82 years old and no other descendants remain. 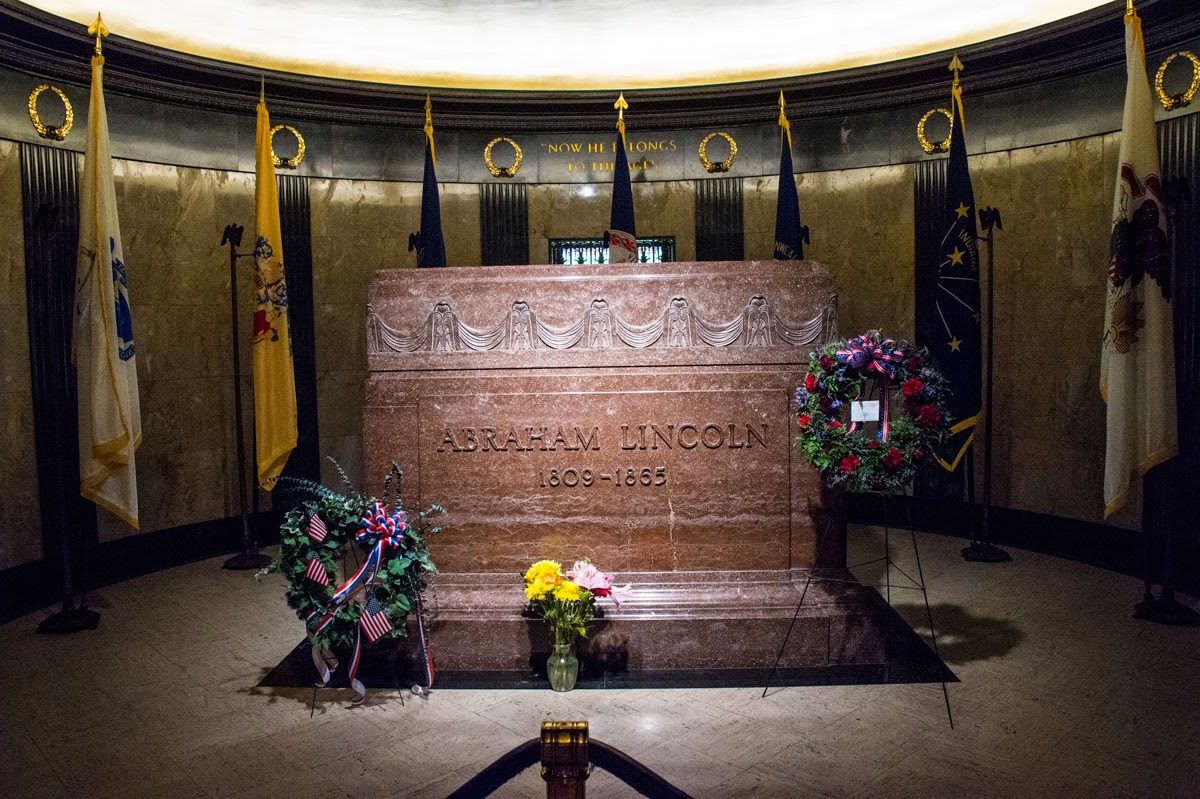 We drove back towards the fairgrounds and made a quick stop at the Post Office.  My Progressive part came, which makes me nervous .... now I have to try and install it.  More good news, the washer repair guy called and will be here tomorrow morning, with a pump for my machine, if indeed that is the problem.  Hope I'm not paying overtime for the Sunday morning visit.  We understand there is another Farmers Market in mid-town today, so will again stock up on veges and "stuff" after we visit the Lincoln Library.