In 1668 French Missionaries settled Sault Ste Marie and in the early 1800's it became an important fur trading settlement.  Eventually, after the War of 1812 when the US built Fort Brady, Americans flooded the area and overwhelmed the early settlers.  In 1855 the first lock was built, which improved shipping tremendously.  While leather tanning was the big business here from 1900-1958, tourism quickly rose to the top as people came from worldwide to watch the big ships travel the waterways.

To celebrate those early settlements, one sprang up in a large park in town, full of mostly French settlers.  They not only had tents to sell their wares, but tents that looked like they were from that era that they slept in.  I don't think they fared too well in that downpour of rain the day before.  Most had a wood fire going out front with coffee pots and dutch ovens steaming away.  I had to laugh when one guy dumped out his coffee pot and said "this thing is full of grounds .. how am I supposed to clean THIS!!"   I guess he hasn't been a French Fur Trader very long. 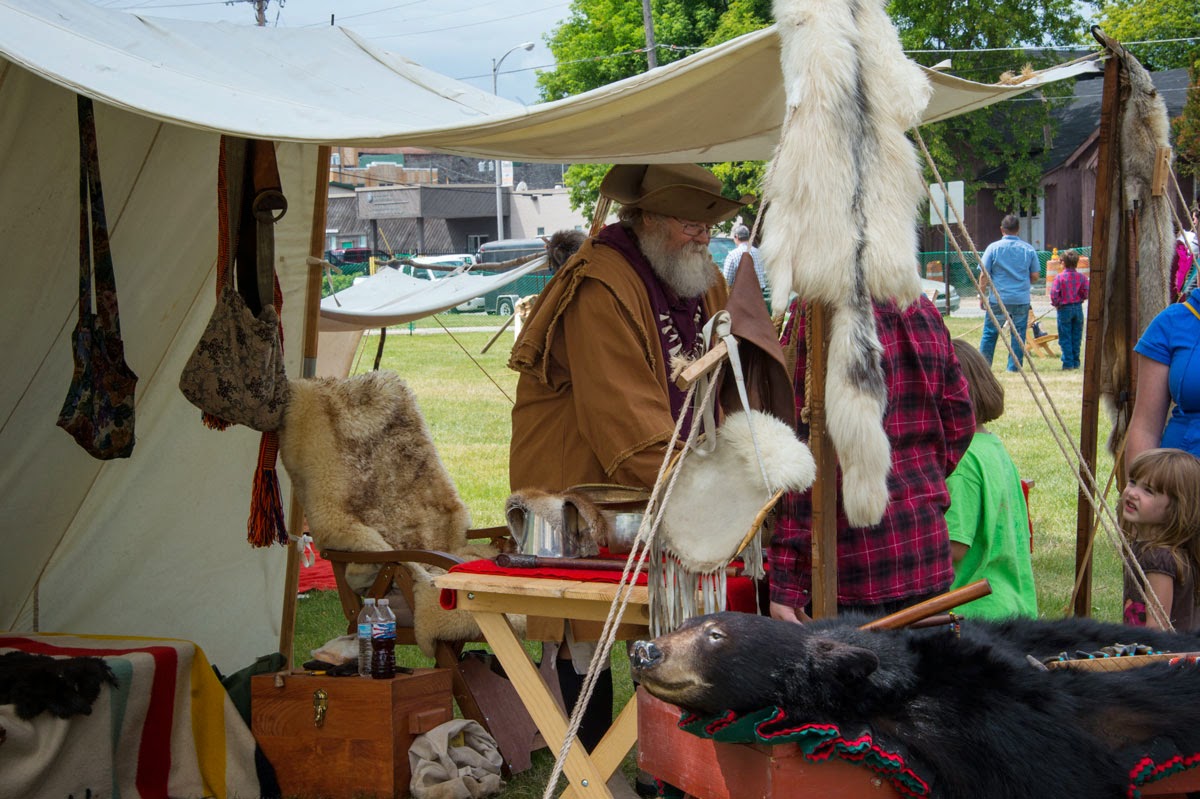 You couldn't find just anything here ... it was only items that might be sold in the 1800's, like trade beads, leather, tea ... there was even a "throw the hatchet" exhibit!!  I stayed away from that when I saw him letting the kids give it a try!! 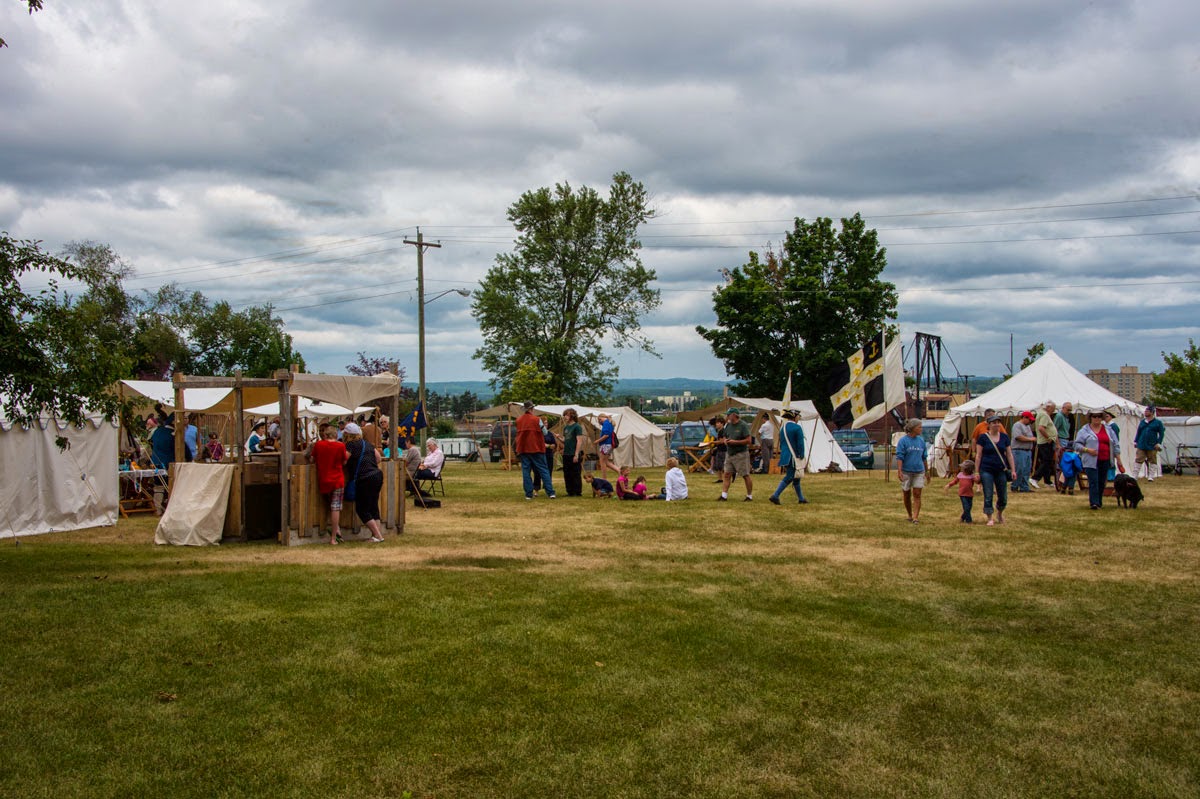 This young lady really was a blacksmith apprentice, practicing on her homemade bellows.  I'm not sure this is a lucrative profession these days ... I think her chances of employment are limited, but she was doing an impressive job on a small hangar.  Someone said she set her pants on fire the day before, but I think they were just jealous!! 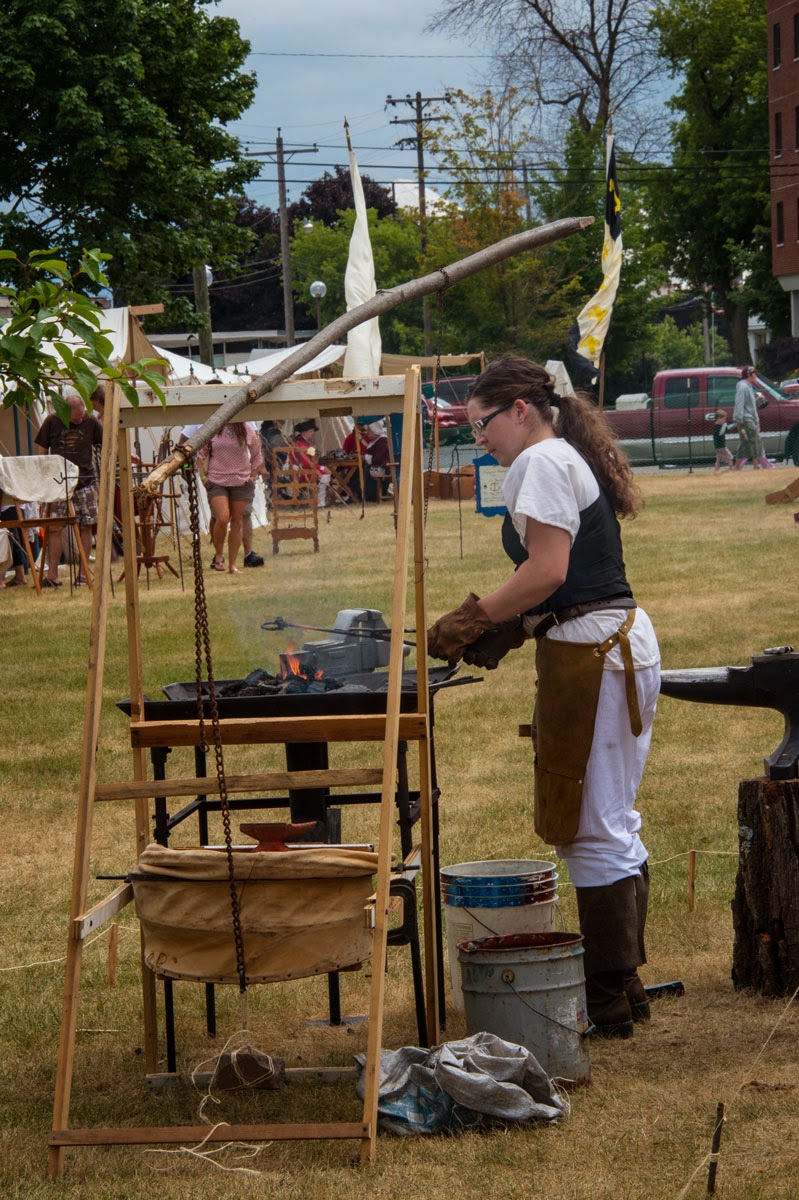 Now THIS guy was interesting.  He made water buckets, by hand, with old tools.  He chopped the cedar log, shaped each stay, put 12 of them together with a hand forged band, then cut a slot in the sides to fit in a bottom piece. 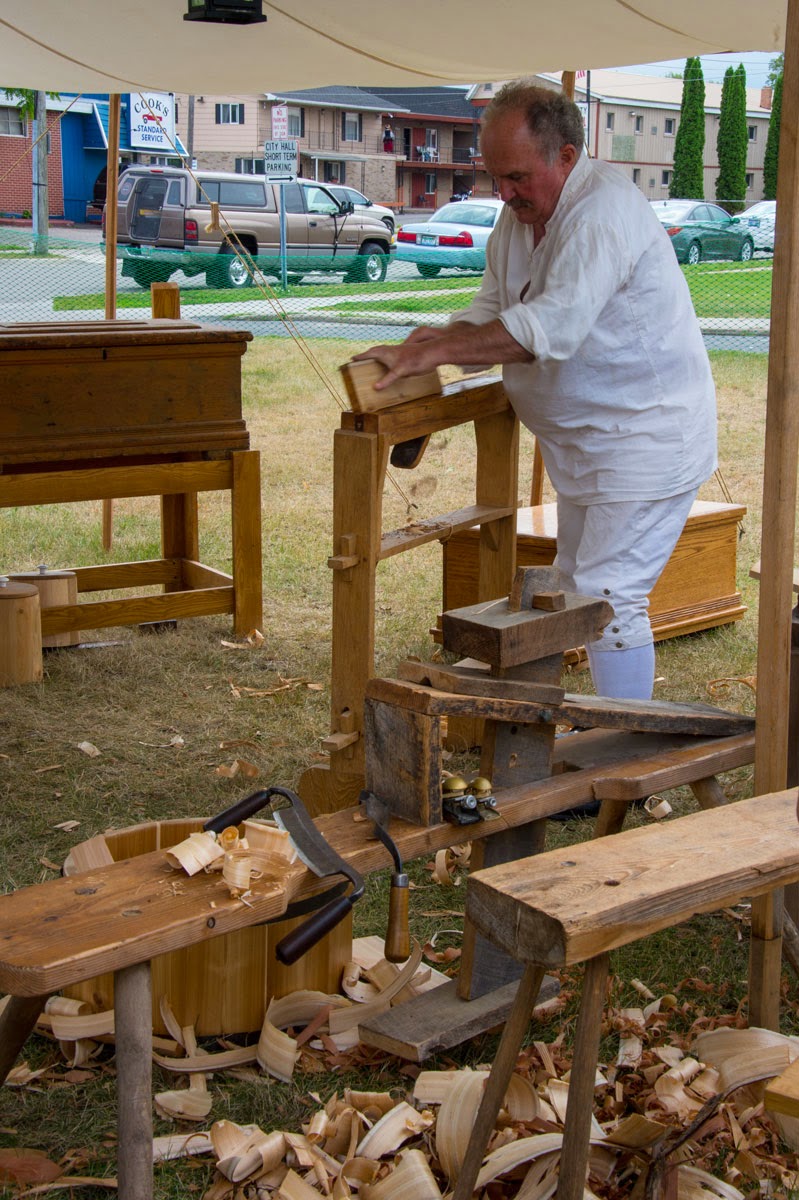 Course he did mention that the bucket he's holding has been at this stage for a couple of months, so we didn't place any orders. 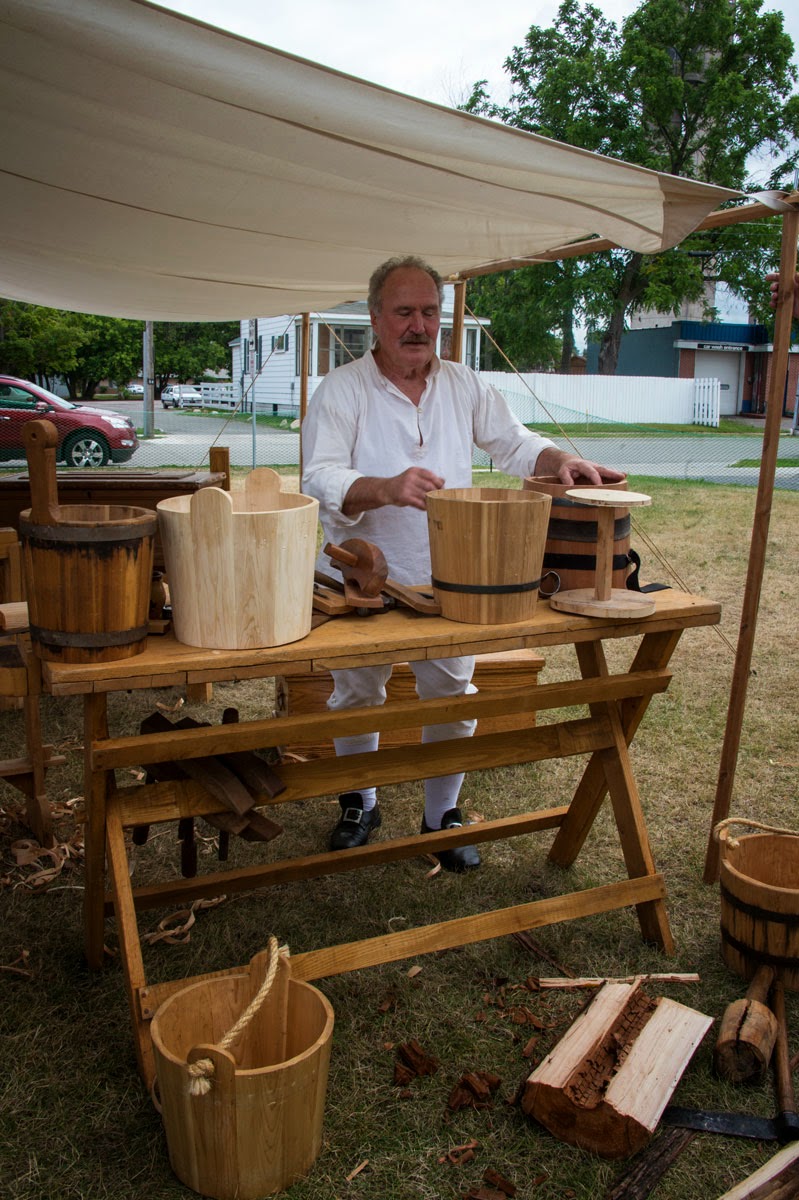 Seems most of the tents had a musician or two, so they got together and played some great music!! 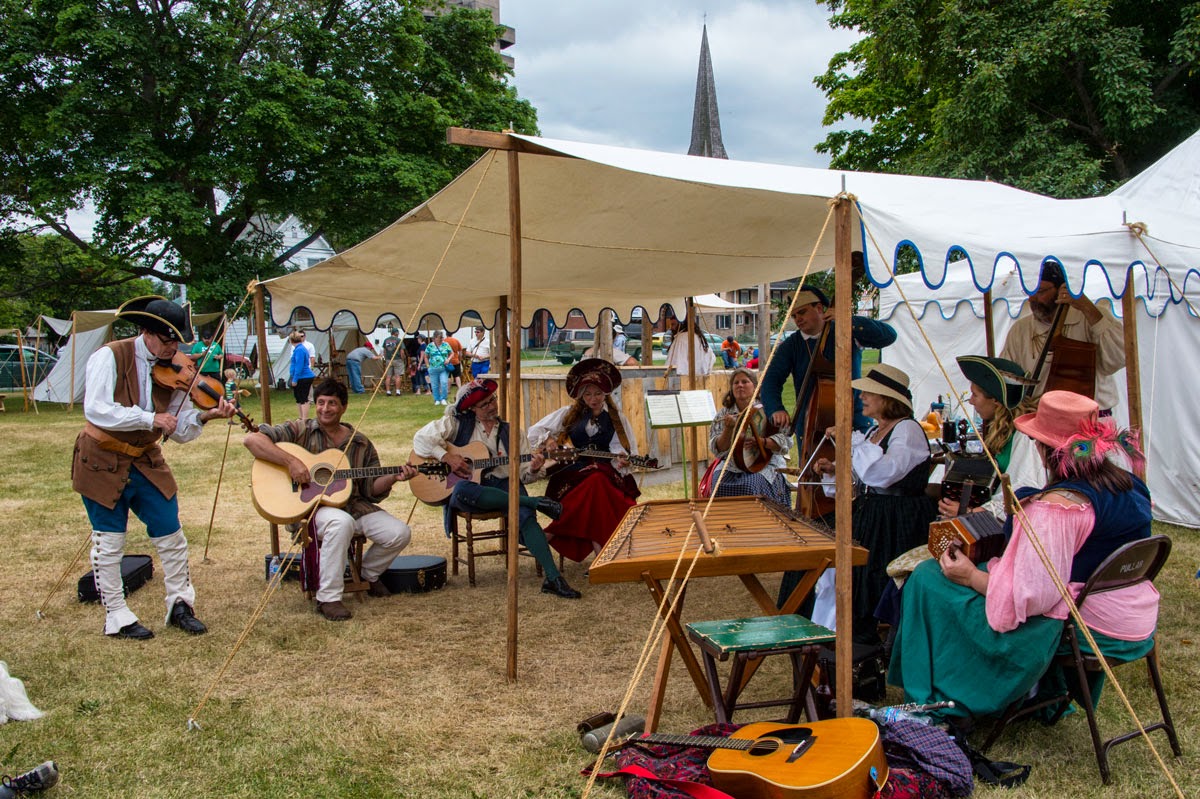 I saw the canons with their just-in-case water buckets, but didn't think much about it until we were on our way out, when it sounded like a bomb went off ... about 10 sticks of dynamite worth!!!  Turns out they were firing the canons, with blanks of course ... but boy were they LOUD!!! 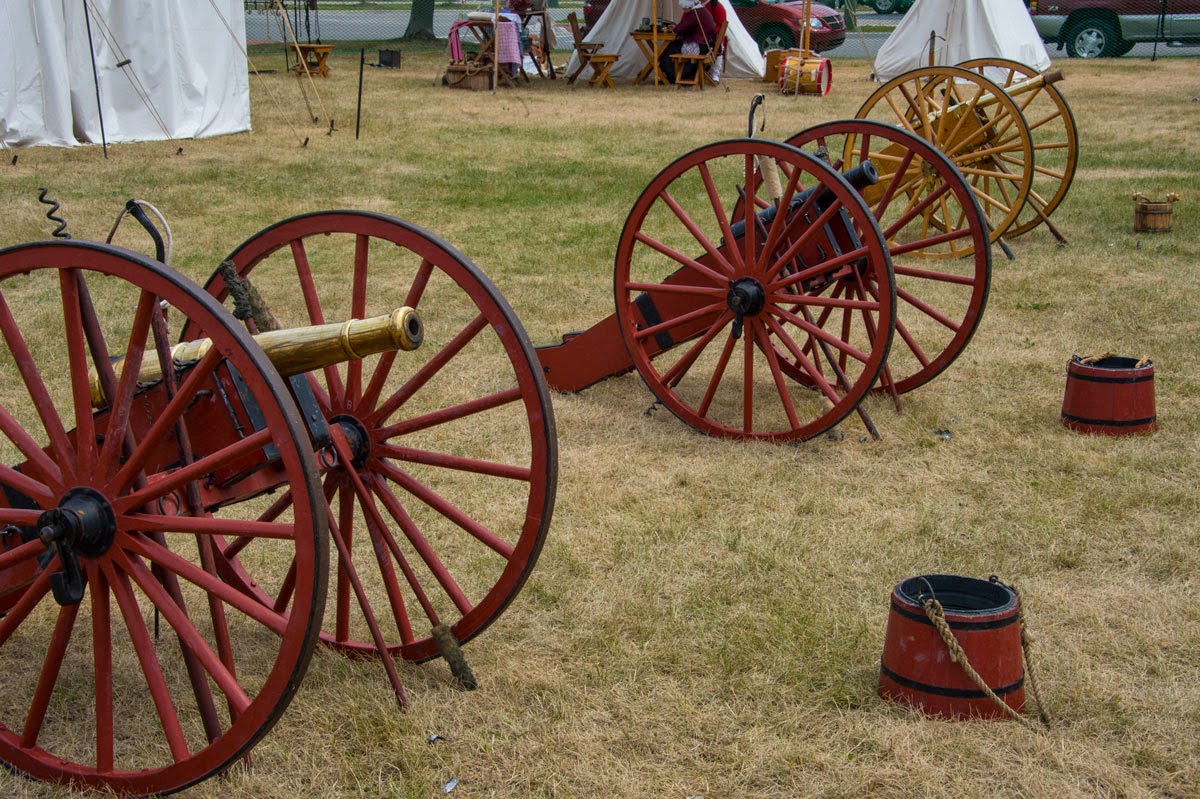 We were regaled with the presence of this gaggle of geese yesterday.  The two big males with their heads up were keeping watch while the females ate their fill.  Soon as I got even a little bit close, they honked twice and moved away. 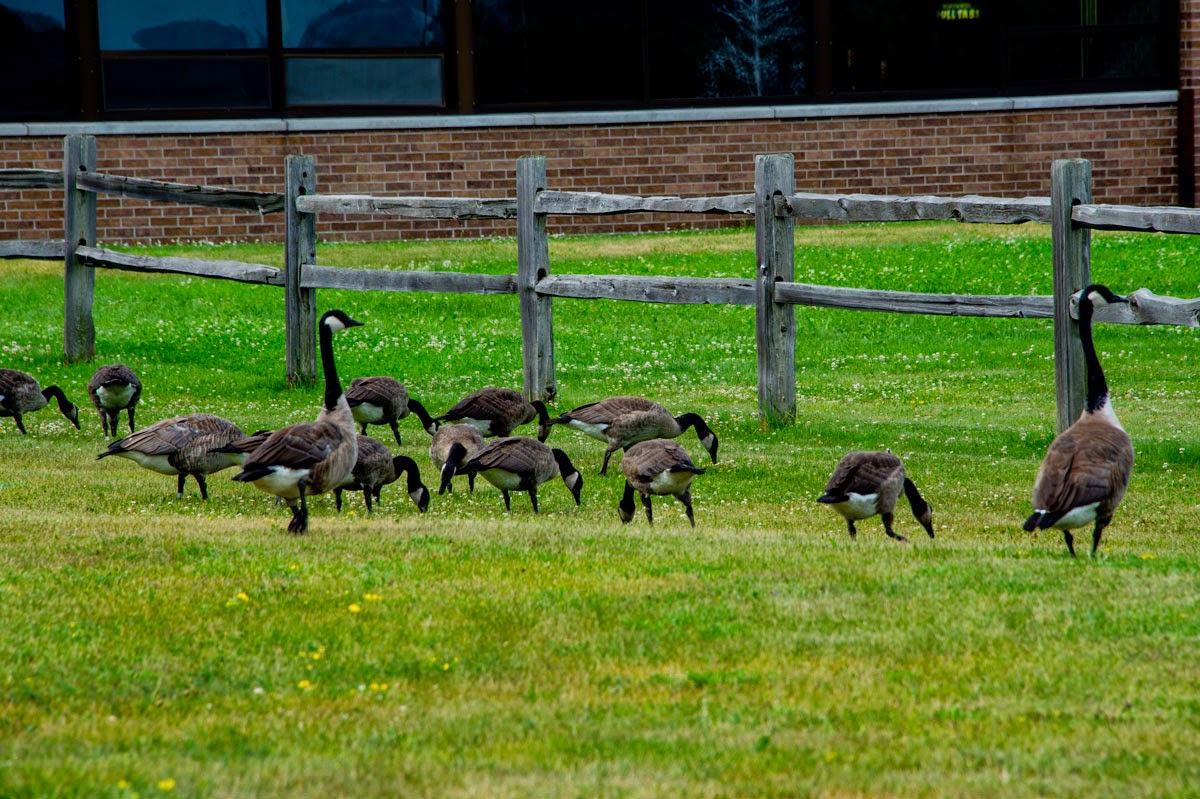 At least I was able to get this big guy before they got too far. 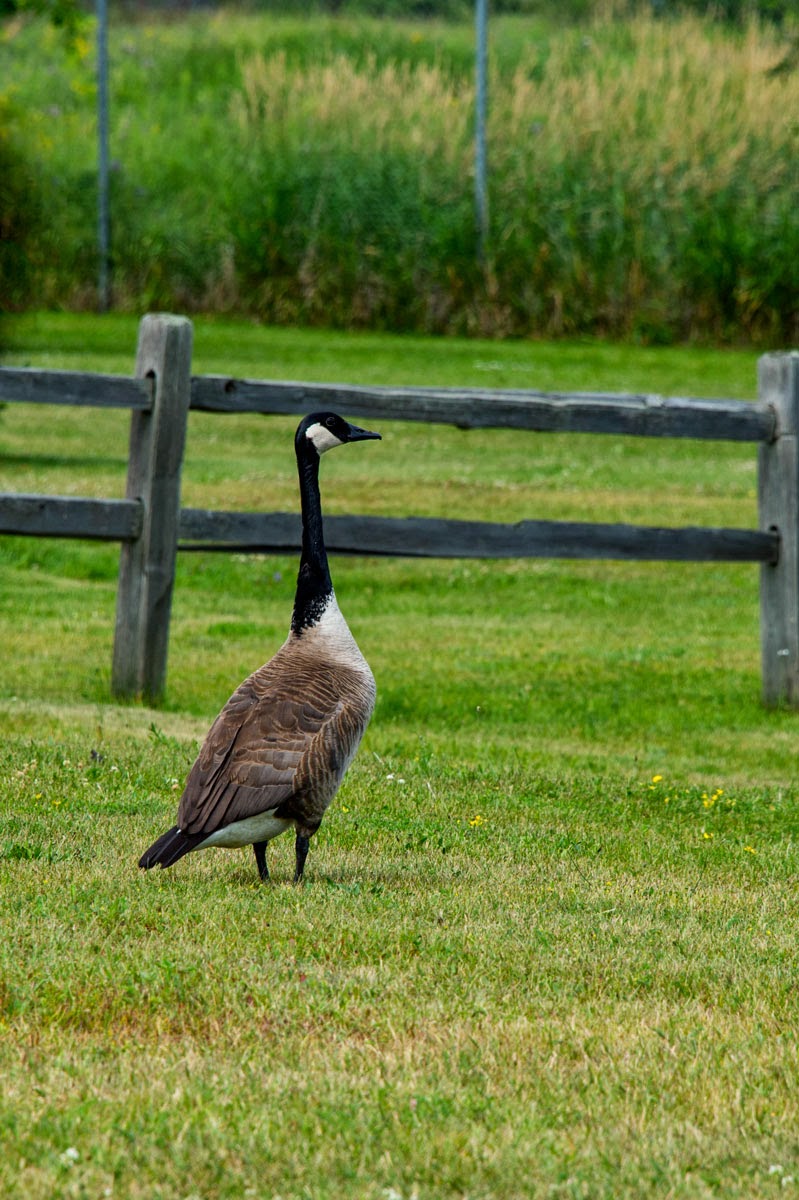 With the first bunch gone, I went towards the water where another big group was snacking on the grass.  There were duck butts everywhere as they ate, then took a bath before lounging on the closest dock. 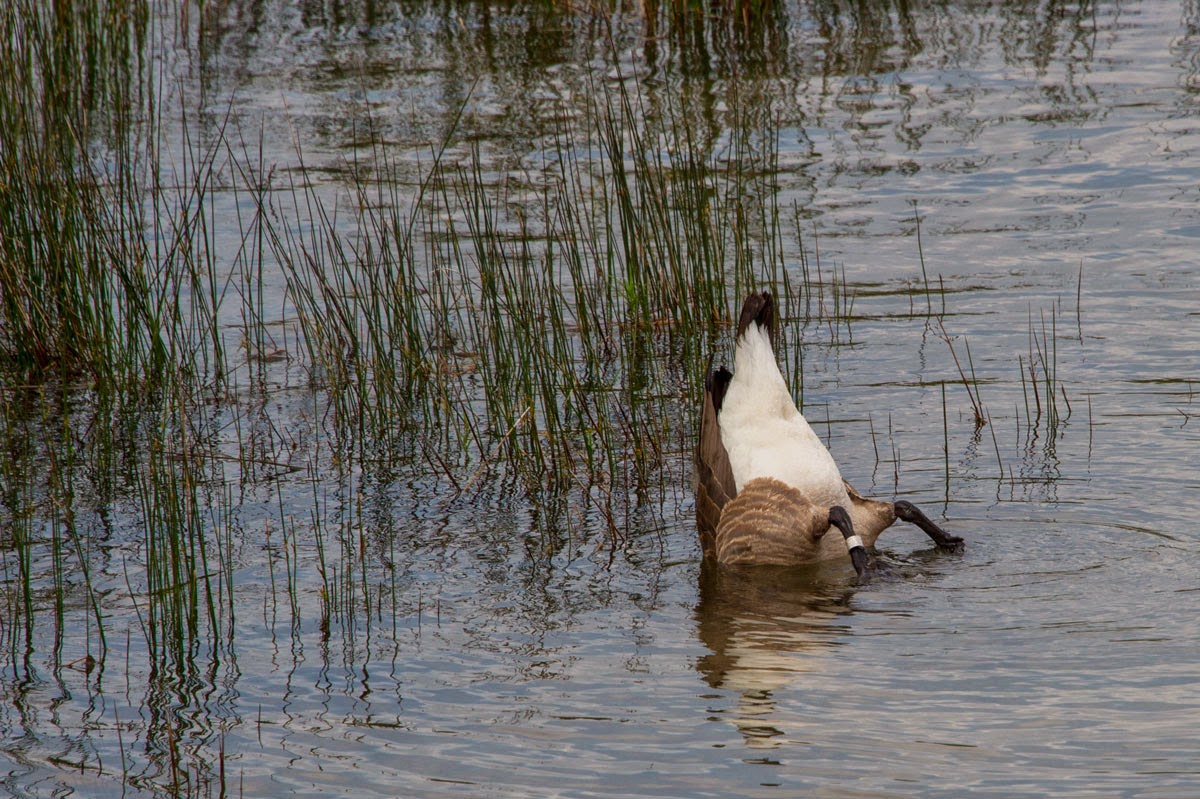 This is the only baby we saw ... still covered in fluff as mom kept a close eye out.  They are pretty wary and wouldn't let me get close at all before disappearing in the grass. 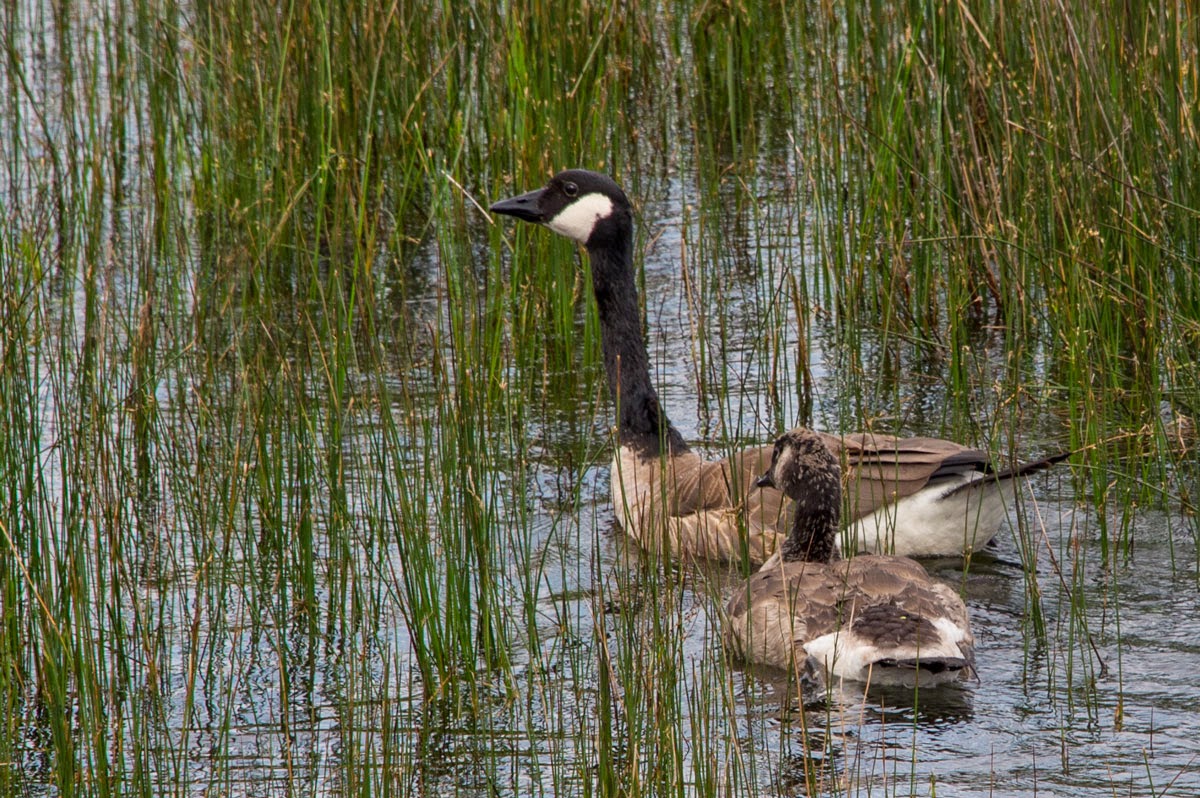 Nice campsite ... we are about 5 feet from the rivers edge.  Alas, all good things must come to an end.  With reservations available for only one rig, the Westerfields stayed while I moved to the Aune Osborn RV park just a stones throw away where I have a 30 amp hookup and water for $27 a night.  It's very quiet with lots of space to spread out!!  Many sites here face the water, but call WAY ahead if you want one, since they all seem to be reserved well in advance. 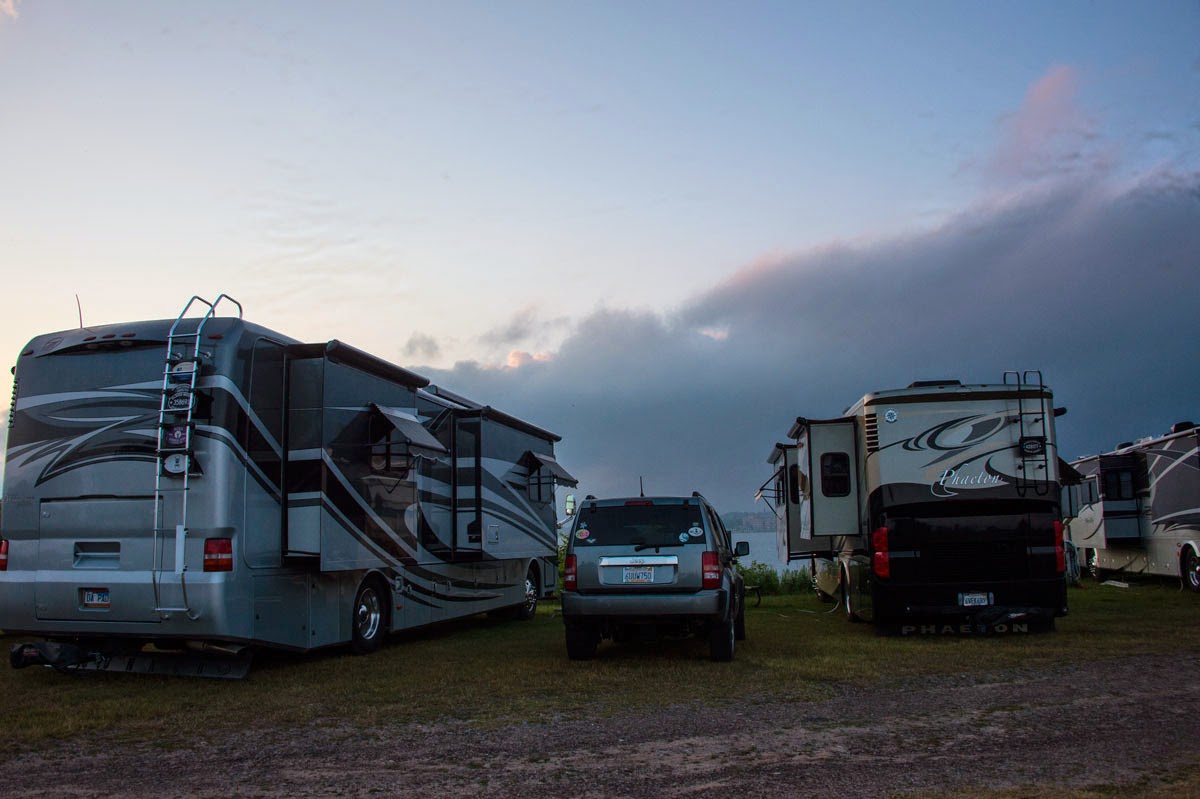 With all the rain Saturday night, I was hoping for a brilliant sunset, which didn't quite happen, but this was beautiful to watch ... at 9:30 at night!!!  The days are definitely long on the East Coast!! 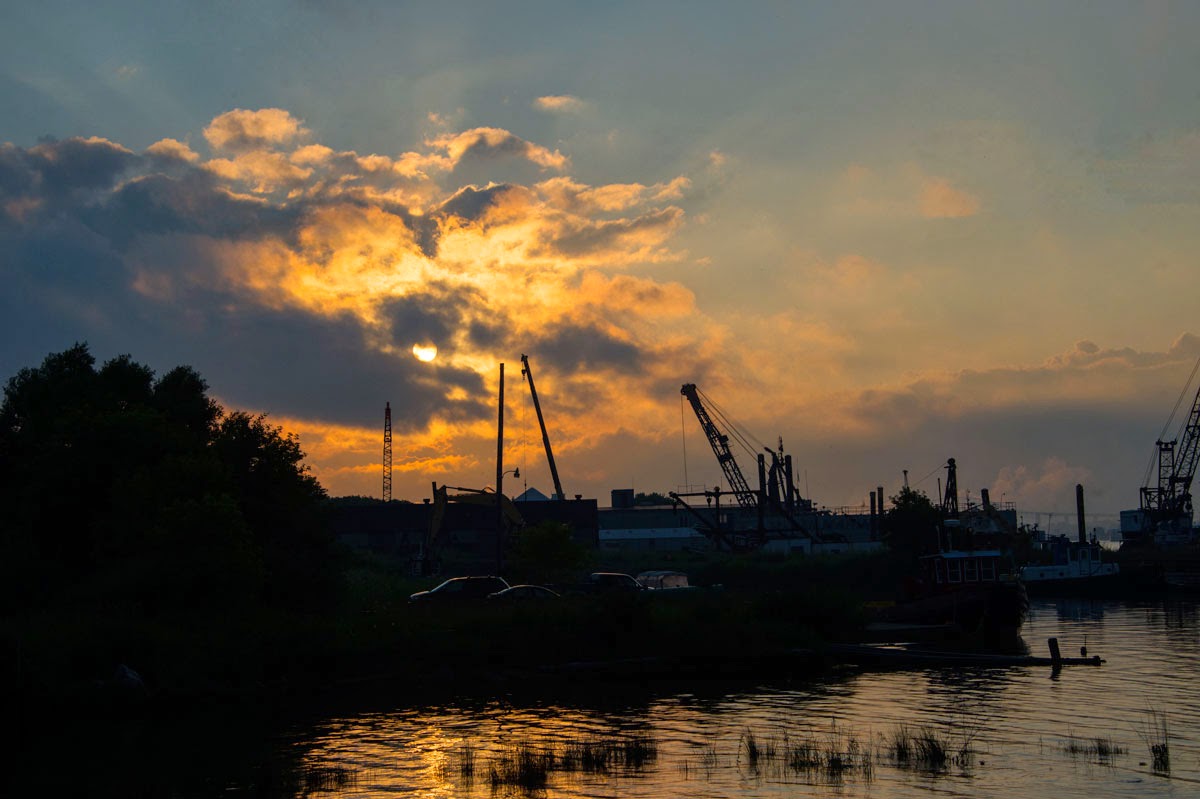 Today's adventure is two hours away, so we're off early!!  See you tomorrow morning!!
Posted by Nancy Kissack at 4:27 AM