World Famous Soo Locks ... From The Inside!!

The locks that make it easy for ships to go from one lake level (or ocean level for that matter) to the next, are an amazing but simplistic invention.  Water comes in from above to fill the lock, the gates are closed and water drains to the lower lake level so the ship can leave.  Today we'll get to see it up close and personal in a very small boat, making it all the more spectacular!!

Early in the morning the fog came in, but that didn't keep the big Lakers off the river, even though it's pretty narrow through this section.  The river looks wide, but the deep channel is only wide enough for two ships to pass. 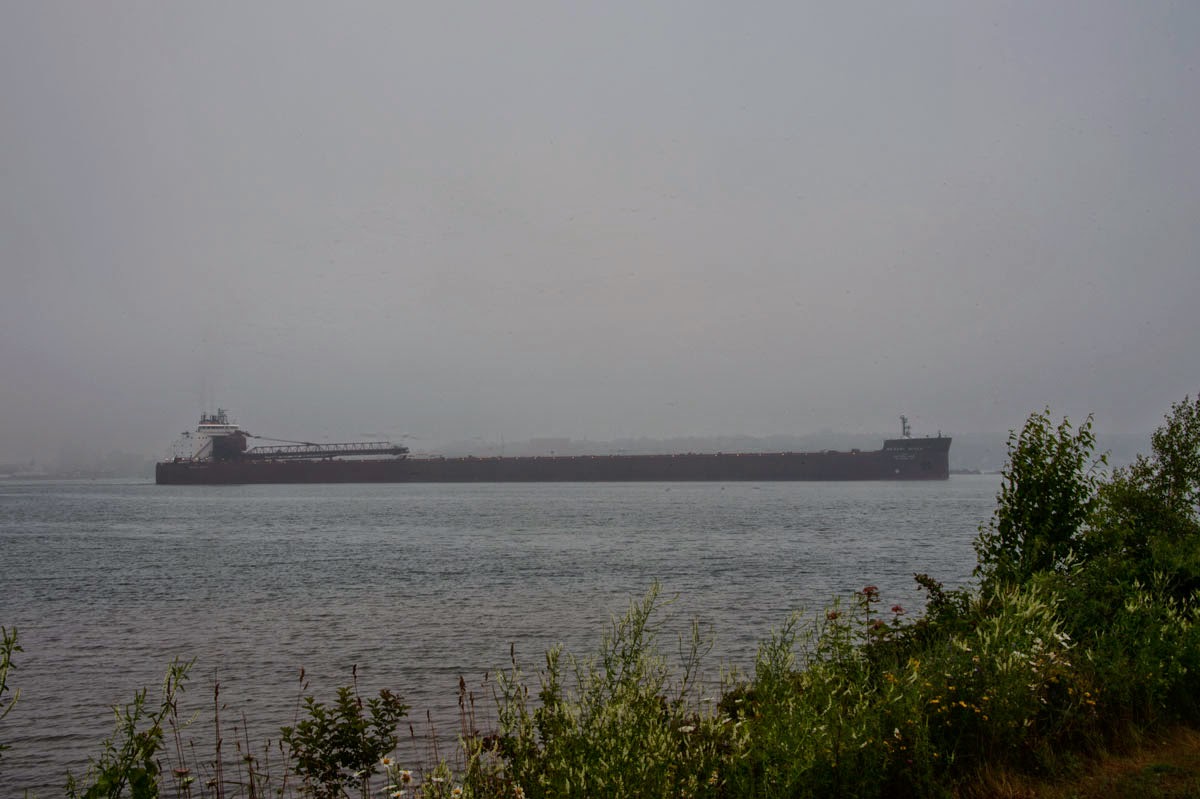 When the sun finally came out, it made for a beautiful day to take the Soo Lock Tour Boat for $25 each ... well worth the price!!  Everybody bundled up since it was pretty chilly with a breeze blowing!! 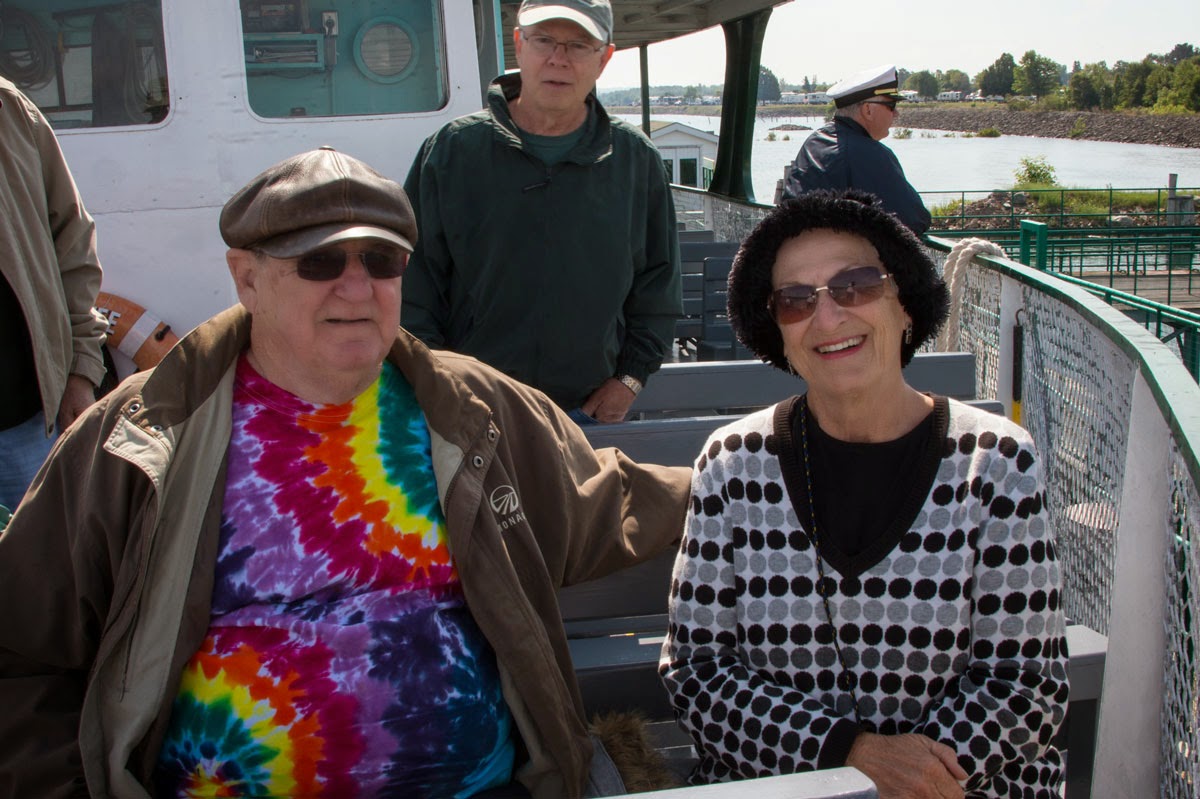 This 1/4 mile long building was beautifully built by Italian stone masons with pillars sculpted on the outside to look like lighthouses.  The Cloverland Electric Power Plant was completed in 1902, providing electricity with water diverted from the river above through a long canal.   Smart fisherman line the front side to catch fish coming through ... those that aren't smashed with the turbines I suppose.  Actually, the fish come up from the river below and hang out here for the best lunch.  You can watch them on the University Fish Cam ... give it a few seconds to load!! 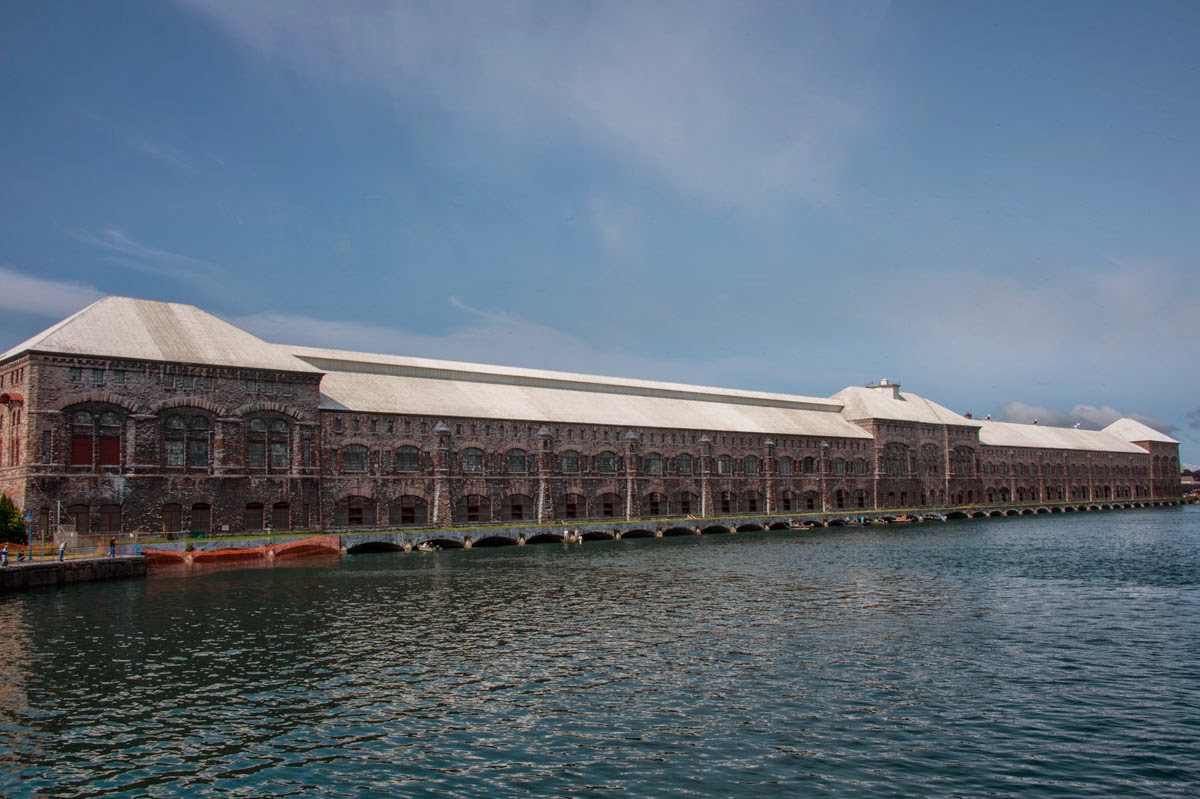 Our first view of the locks from the water shows the Algoma Discovery on the left, inching her way out of the locks so as not to smash into the side ... and I mean inching!!  In the meantime, the Poe Lock on the right received an even larger ship.  I'm sure there's a joke in there somewhere, but the Poe lock really was named for Colonel Poe, Engineer Officer during the Civil War. 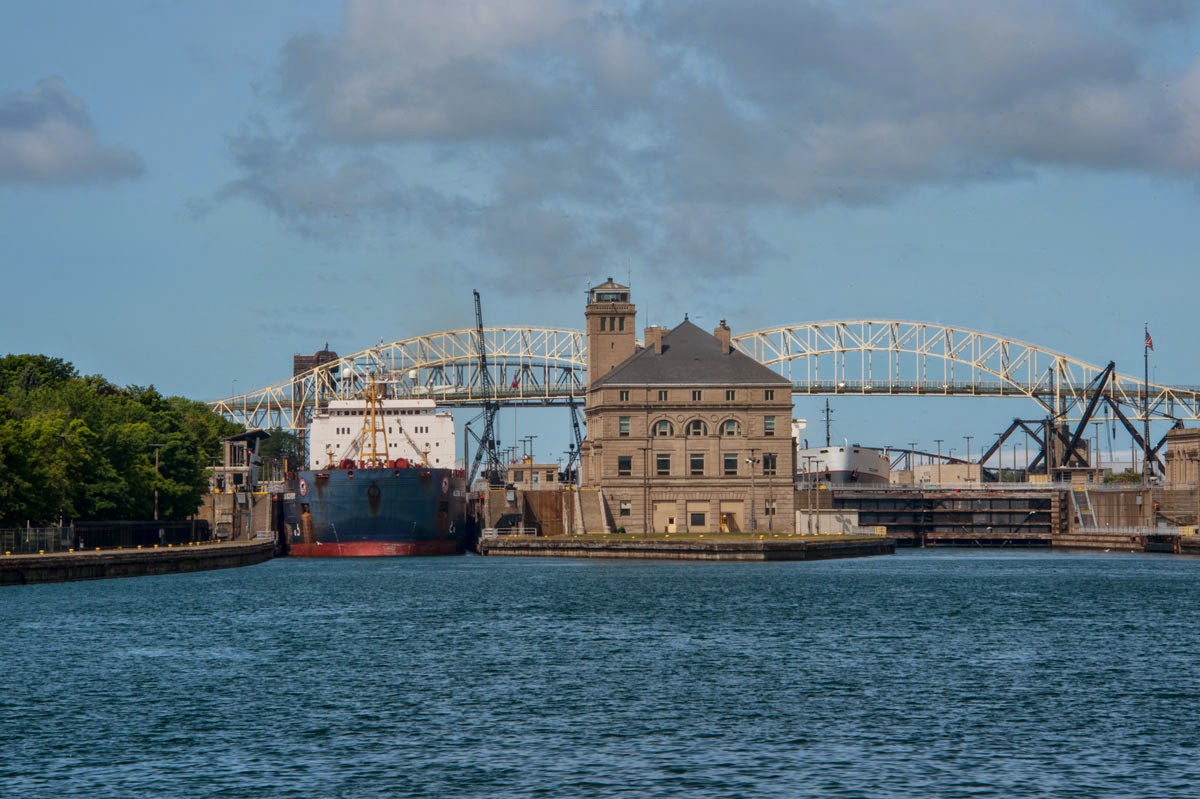 Yikes!!!  We're right in the middle, trying to dodge the first Laker when the Poe Lock gates open.  The big building in the middle is where the manager of the locks controls every entry and exit ... and he held the ship on the right with red lights until the Discovery was far enough out that we could enter and not get run over!! 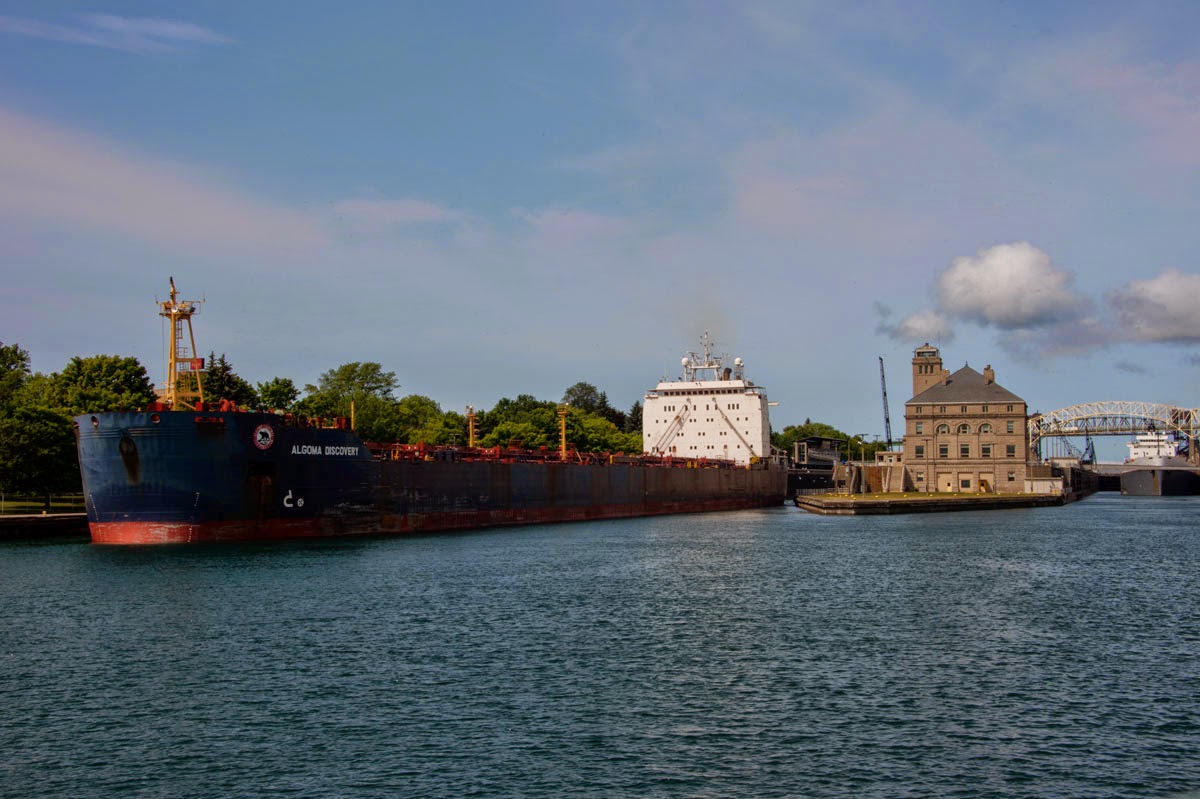 We are actually going to enter the MacArthur lock which is 21 feet below the level of Superior Lake. Originally there were rocky rapids here, so ships were actually put on rollers and hauled by horses along Portage Ave to a dock right next door to us where they went back in the water.  In 1797 it was so hard for the Indians to portage their canoes that they built the first "canoe" locks on the Canadian side of the river, but they were destroyed in the War of 1812.  Seems like this lock idea has been around for quite awhile!! 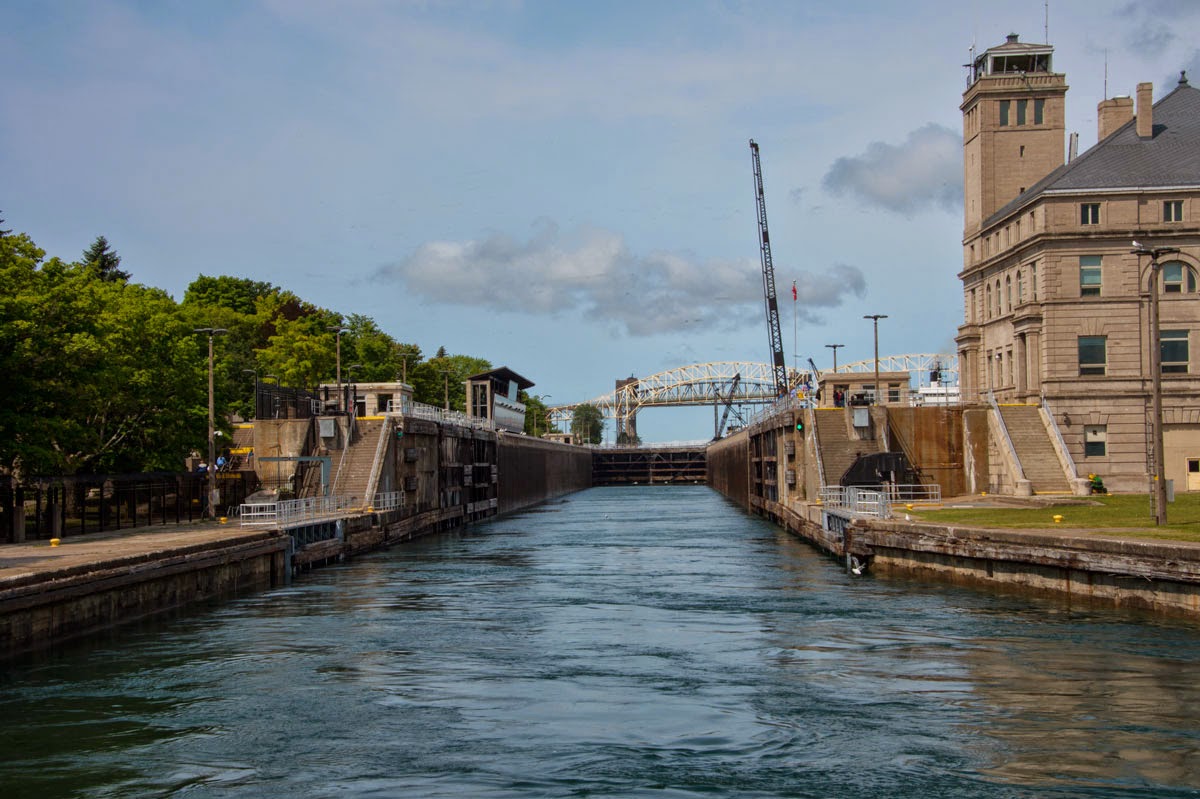 As we sat moored to the sidewalk above, the valve was opened and water streamed in, rising us up to the top of the lock in record time.  You can see the circle of water coming in ... a million gallons??  I can't remember exactly ... there was so much information being given to us I could have used a tape recorder!! 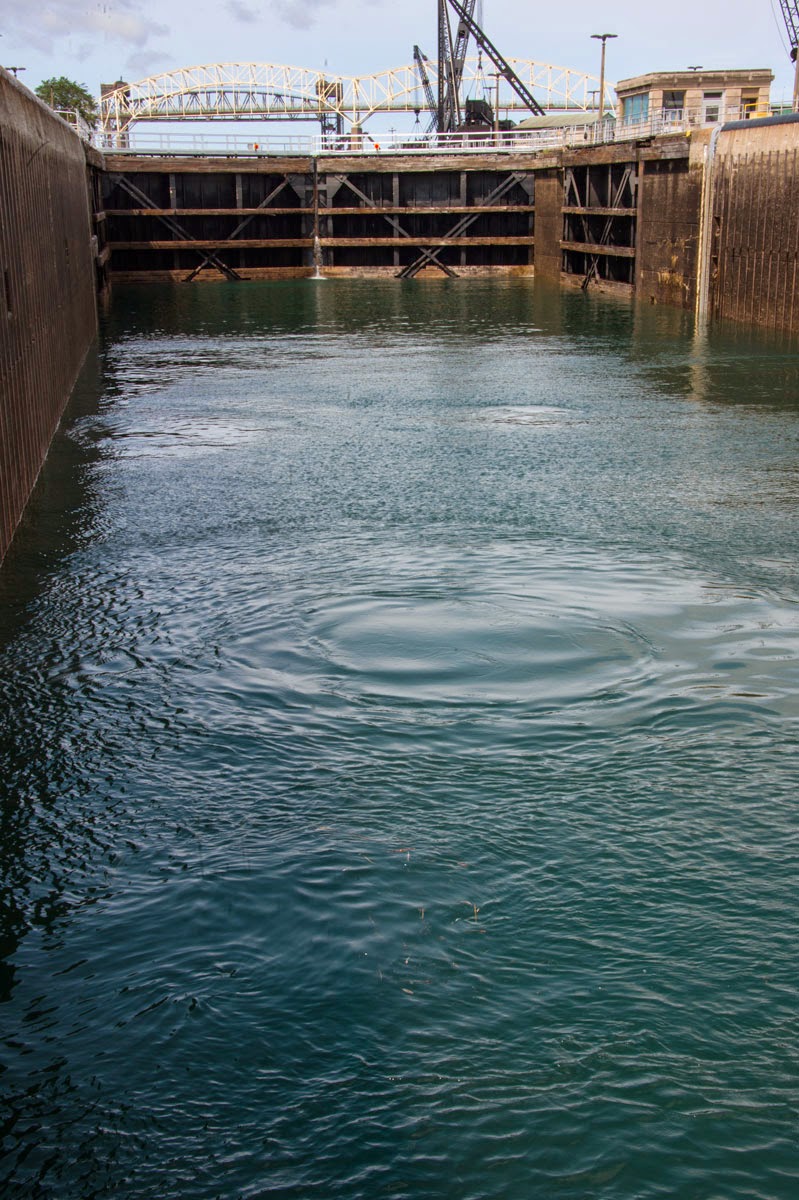 Once level with the Superior Lake side, the gates opened and we cruised on out under the International Bridge to Canada.  All of these huge locks are operated for FREE to any ship coming through, by the U.S. Army Corps of Engineers. 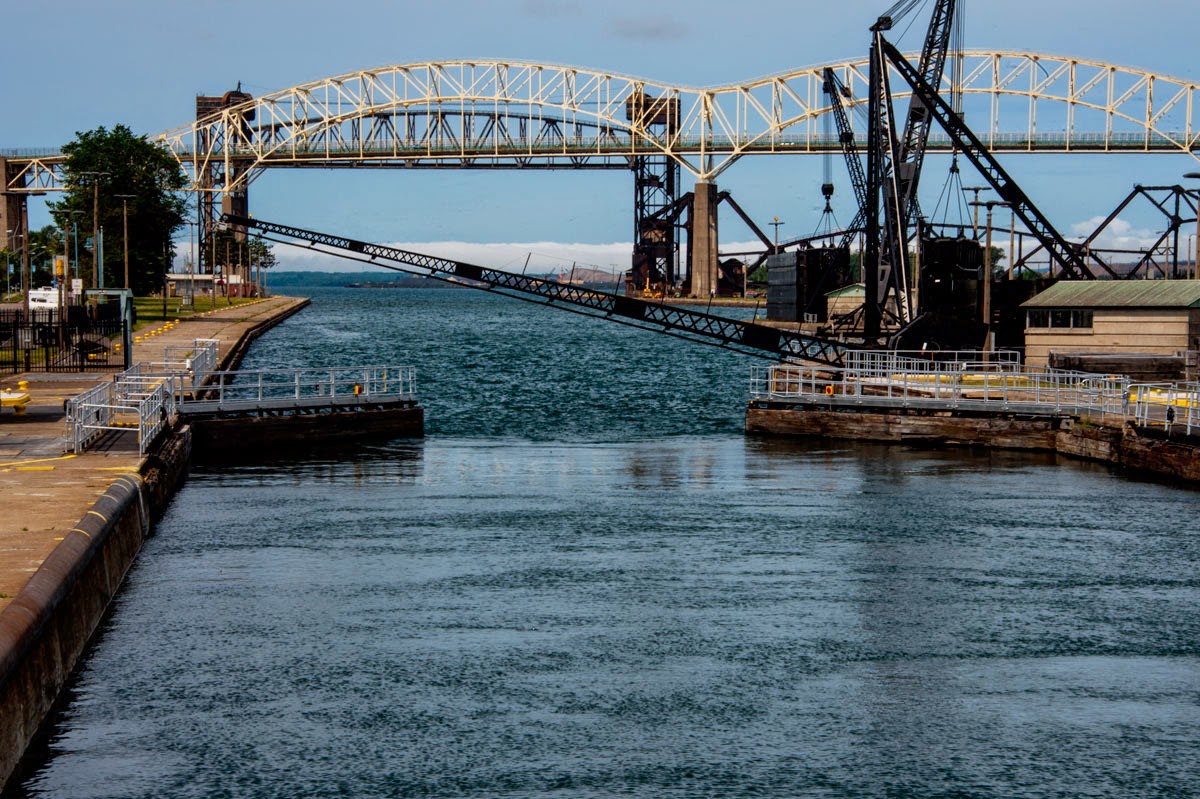 As we made a big circle to the right, the Canadian Steel Company came into site.  Ships bring in coke (made from charcoal), iron ore (which lots of the ships going through here carry) and limestone, placing it in big piles around this plant. 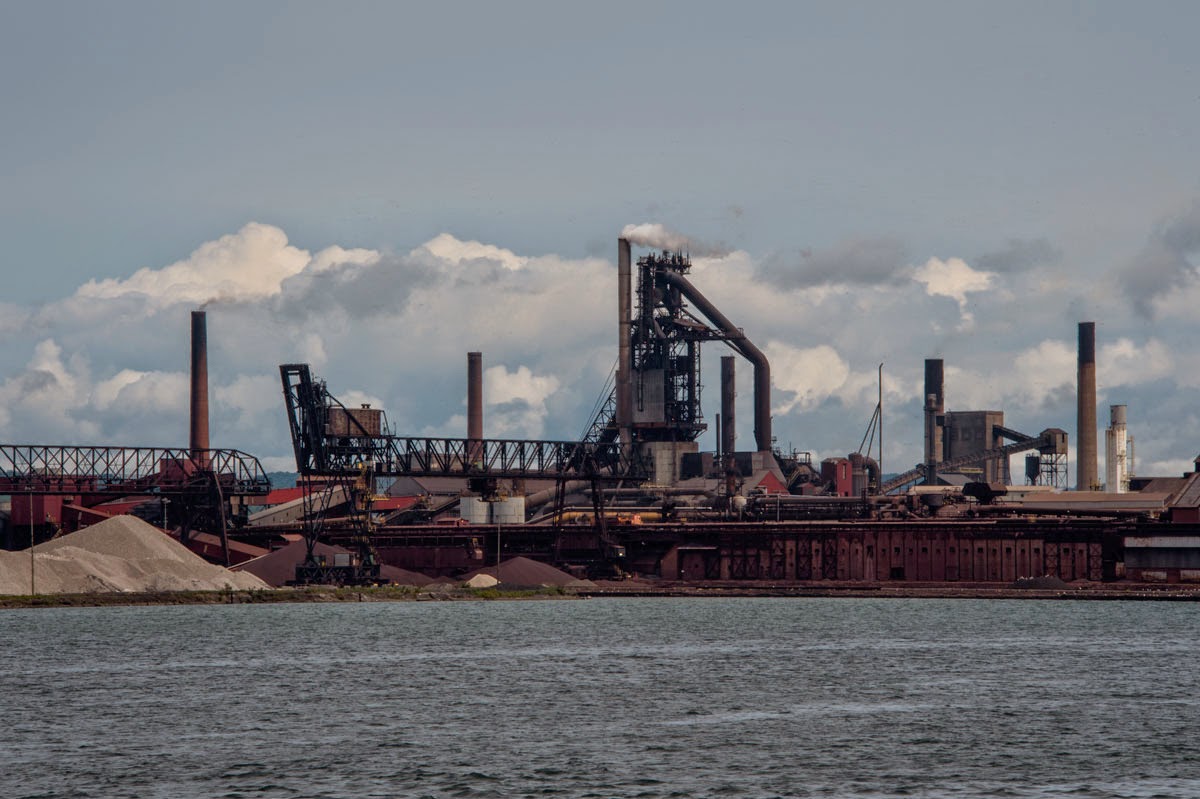 Here the iron ore is loaded onto a train car that dumps it in the blast furnace at the end.  Once all melted together with the coke and limestone, the liquid steel it is rolled into sheets.  Least I think that's what she said!! 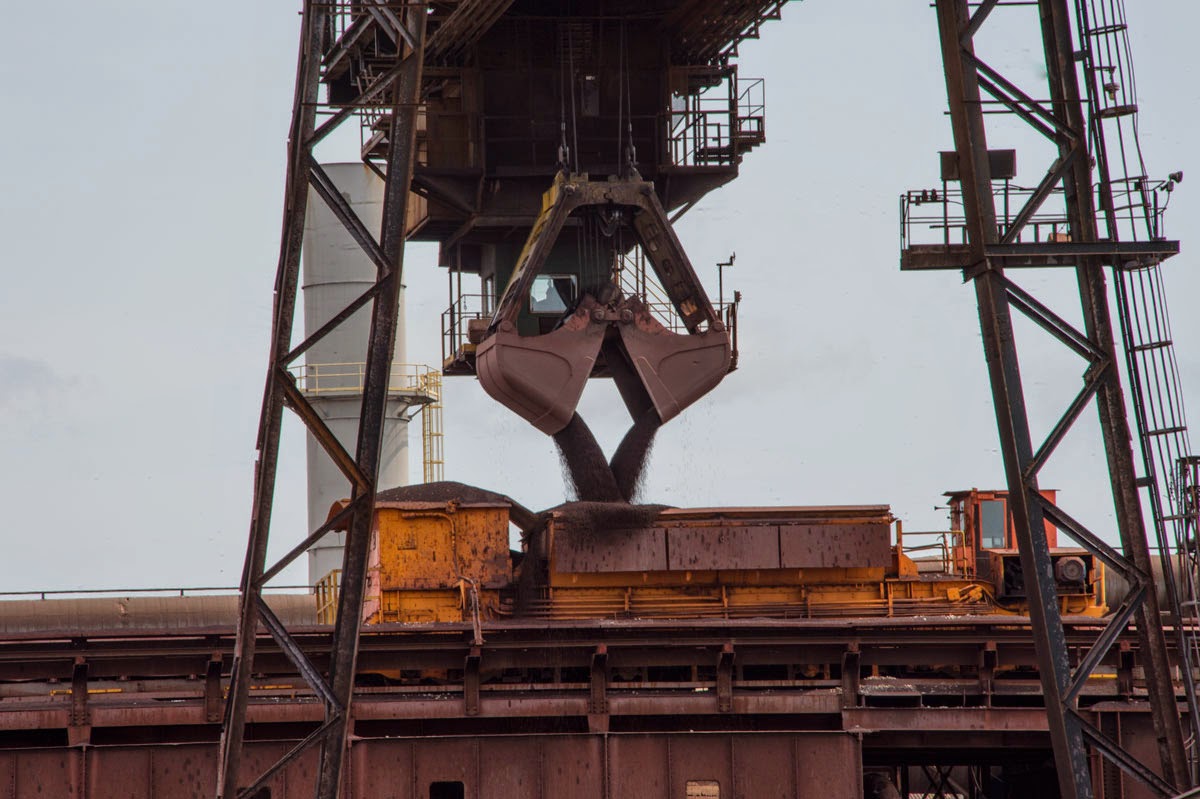 The sheet rolls are then loaded on to barges for their trip to Detroit ... or to whoever needs steel in their manufacturing. 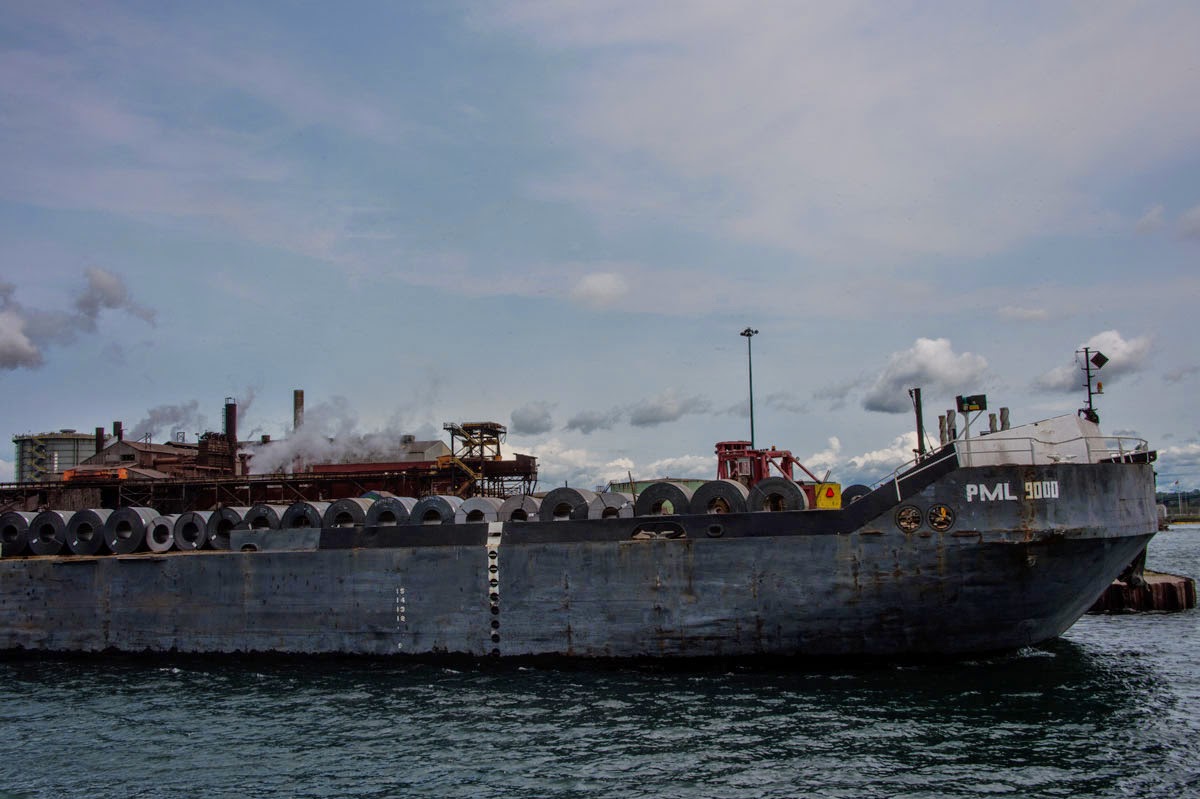 We cruised past the steel plant and headed to the locks on the Canadian side, back under the bridge.  The big dark metal structure swings around for railroad crossings.  We never did see a train come along, but if it had, there are two big bridges that must swing over the rivers so they can pass. 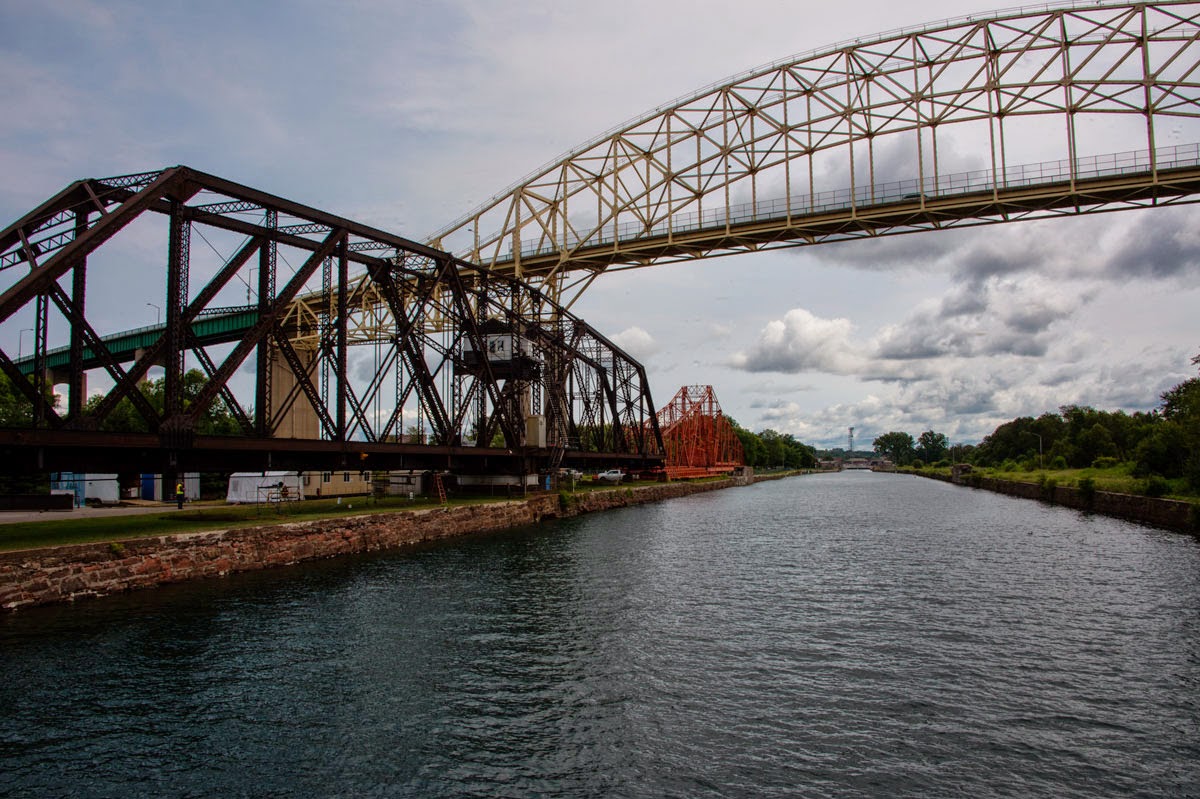 Much MUCH smaller, the Canadian Lock sides collapsed many years ago, having been built with sandstone that you can see deteriorating along the walls, so they built this small lock inside the big one for local fishermen.  We barely squeezed two tour boats in, and as computers sense our presence, they control the water valves automatically.  Miss Isabelle took a trip to Canada today!! 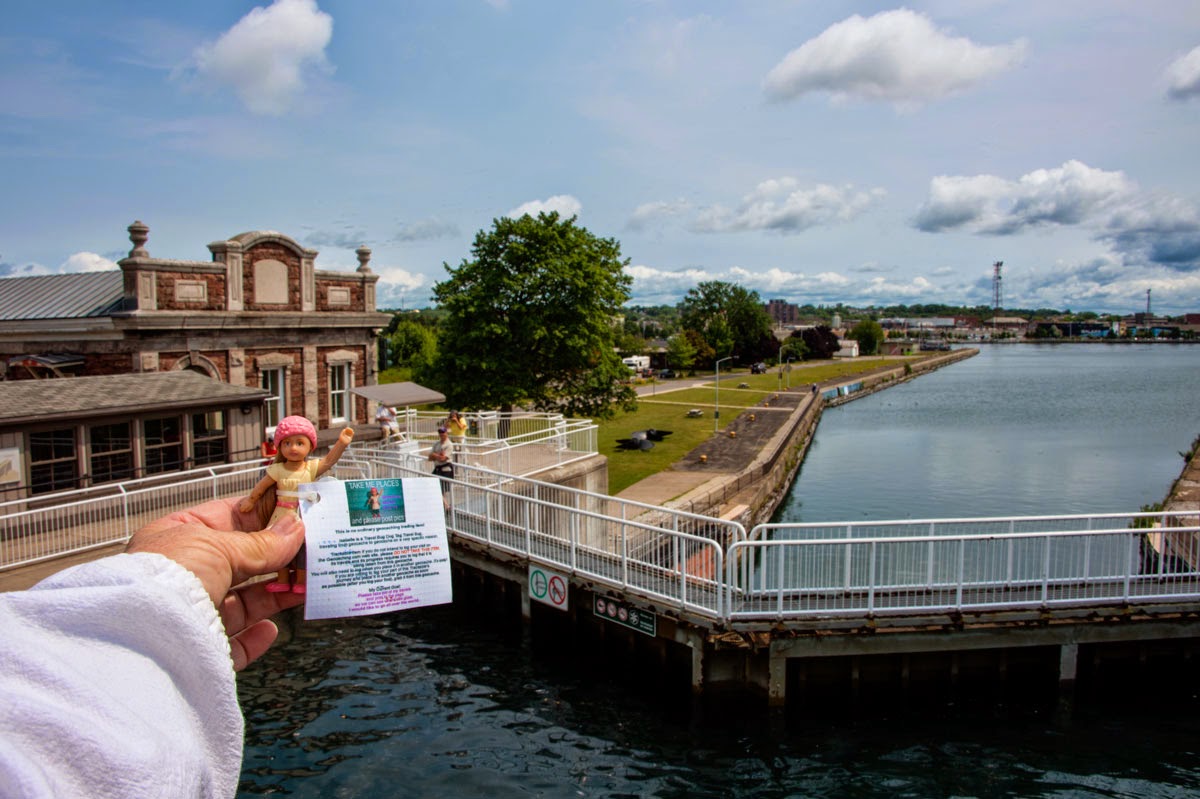 With lots of gurgling and bubbling, the water level dropped quickly!! 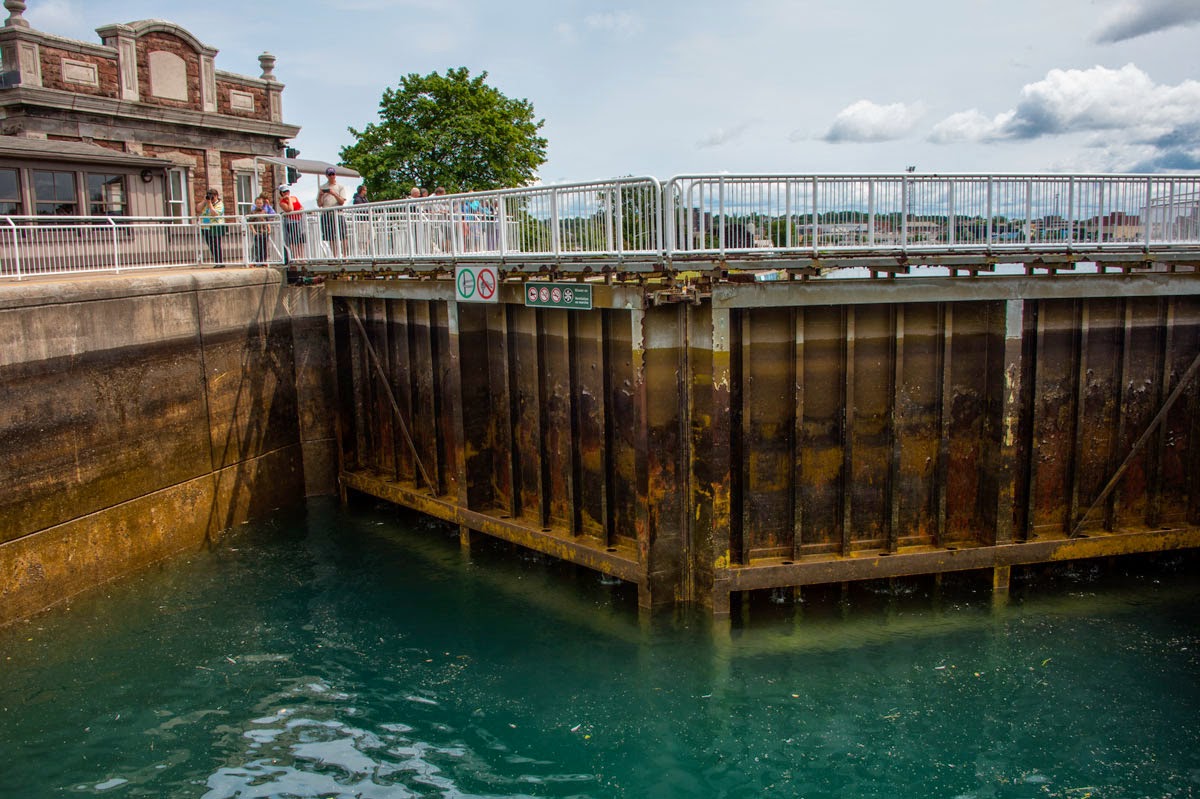 The gates then open automatically and we are again on our way!! 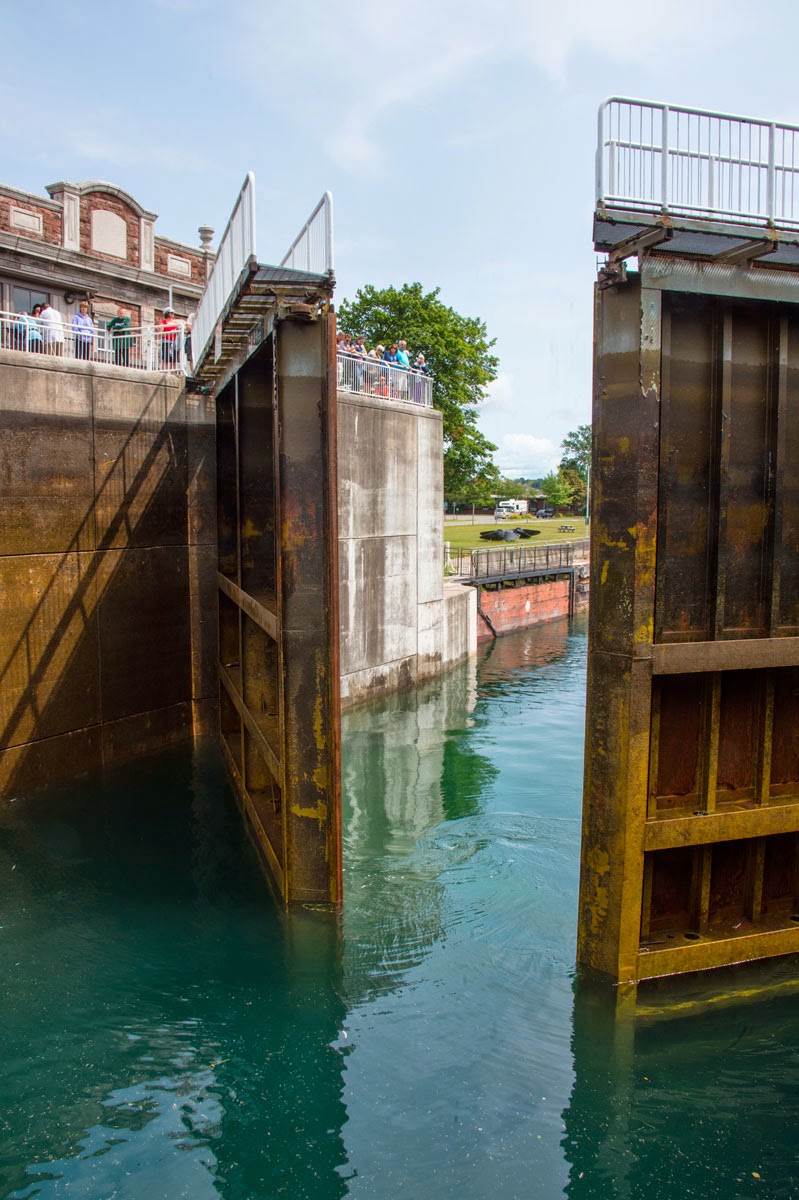 As we came around the bend, we got a glimpse of the original river rapids that the Indians traveled around and through.  This is the only portion of the Saint Mary's River that was left intact and is where the Sault dropped the mother and scattered her brains .... well at least it had a happy ending ... the boys lived and had lots of fish to eat!! 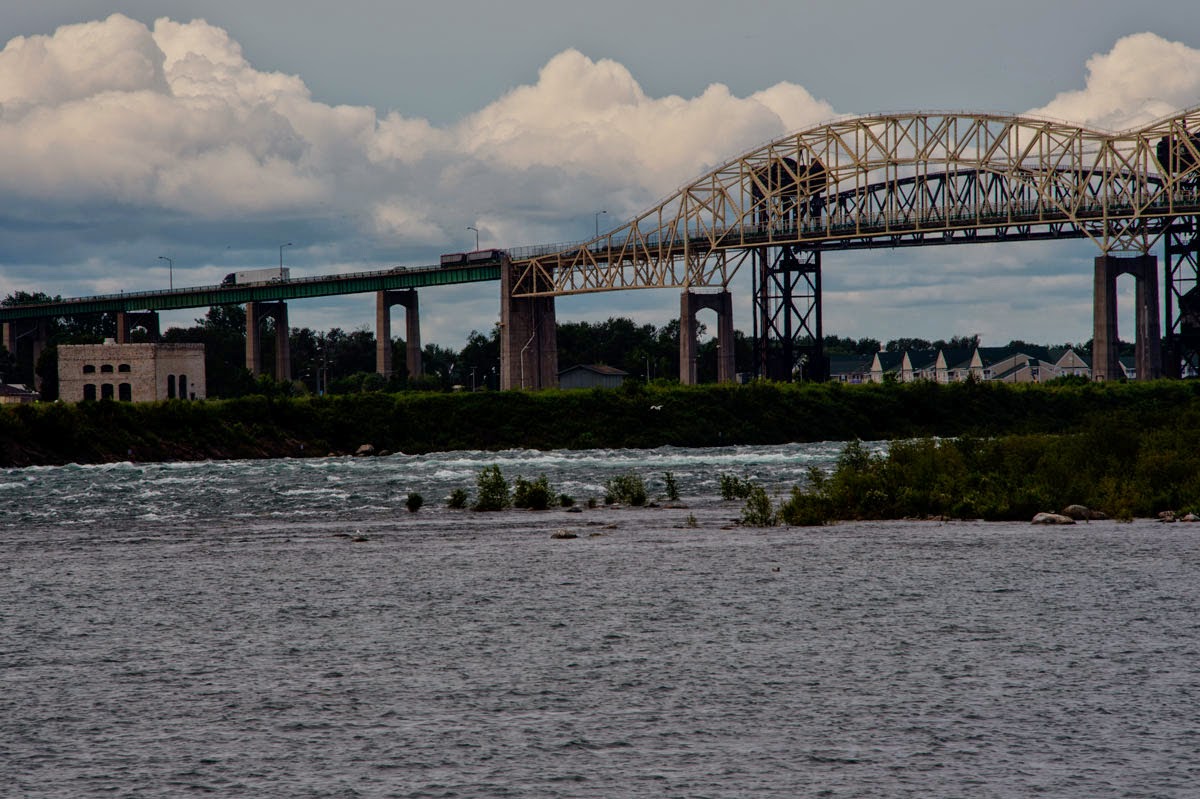 After another wonderful dinner at Karl's Cuisine ... with the second bread pudding not NEAR as good as the first (knocking it down to fourth place) ... we stopped in at the small museum run by the Historical Society.  When someone asked if any ships were coming through, I check my phone and said the Arthur M. Anderson was up next in the locks.  The museum docent said it was the most famous ship on the Great Lakes, so we quickly went to watch her journey through the locks. 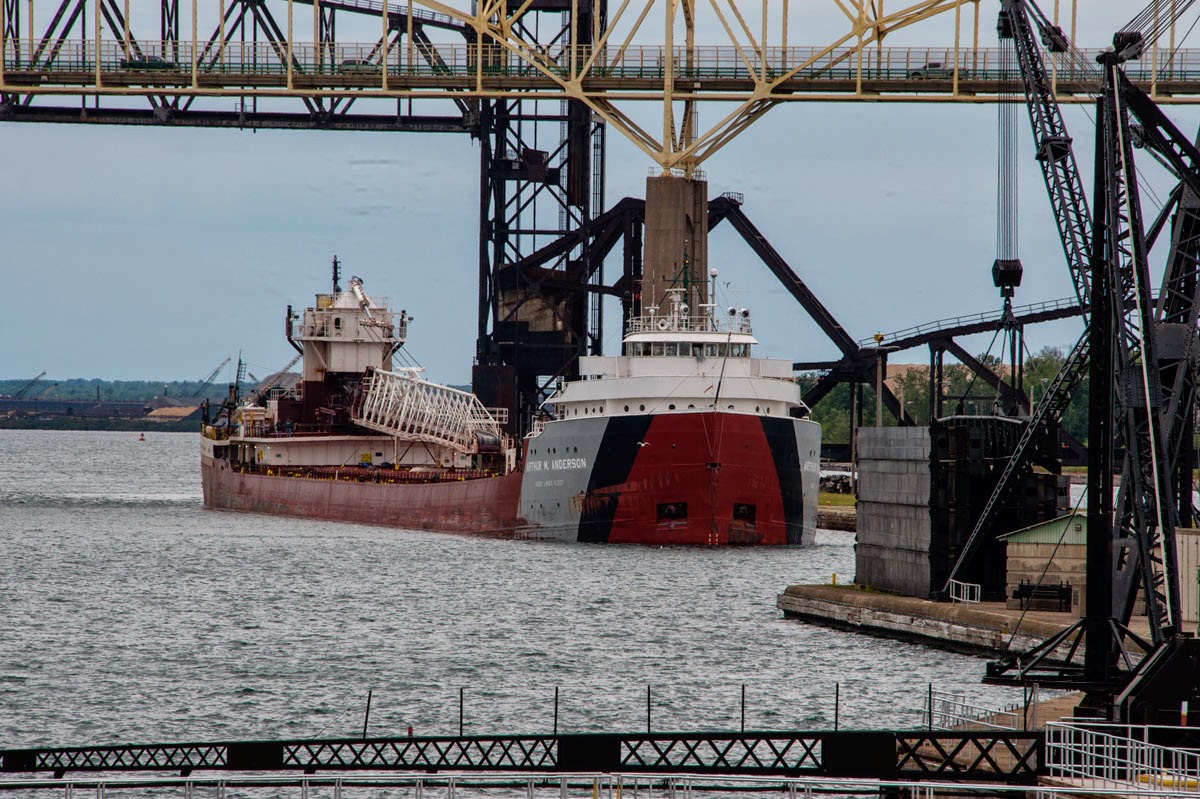 The Arthur M. Anderson was captained by Jessie "Bernie" Cooper in 1975 when he agreed to run with the Edmund Fitzgerald through an upcoming storm.  He was the last to have radio and radar contact with her before she sank and Capt. Cooper came back with the Anderson in the storm to look for survivors, as did several other ships.  Being too long for the MacAuthur lock, she pulled in to the Poe Lock and quickly dropped to Lake Huron level. 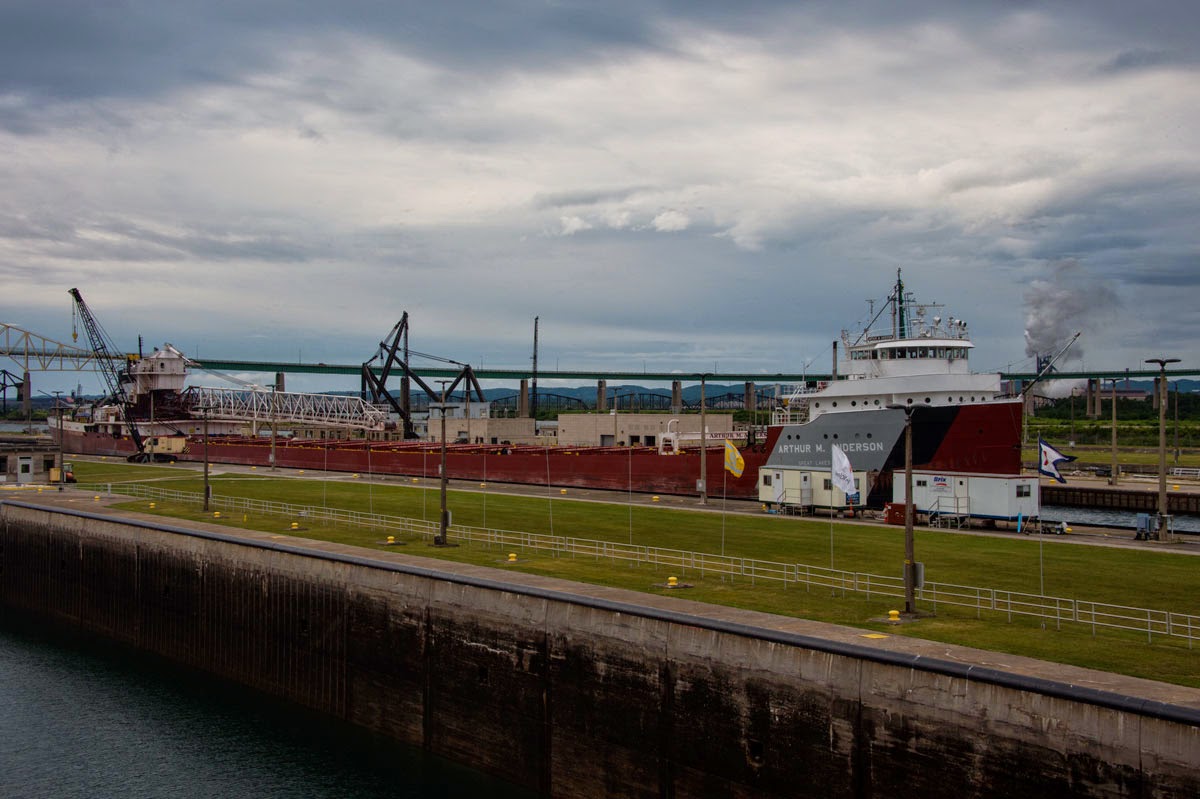 Now frozen to popsicle status, we left the locks and headed back to the rigs to thaw out.  We were just in time to watch the Arthur M. Anderson slide by.  By the way .. the small tug I mentioned last week that was keeping the Tregurtha straight, wasn't keeping her in line at all.  It was a supply boat!  The Captains radio ahead with their list of supplies, which this company acquires ... then as the ship passes by it goes very slow so the supply boat can come alongside and transfer everything to the ship.  That way, the ship never has to dock, saving valuable time and money!!  The small white boat next to the Anderson is doing just that. 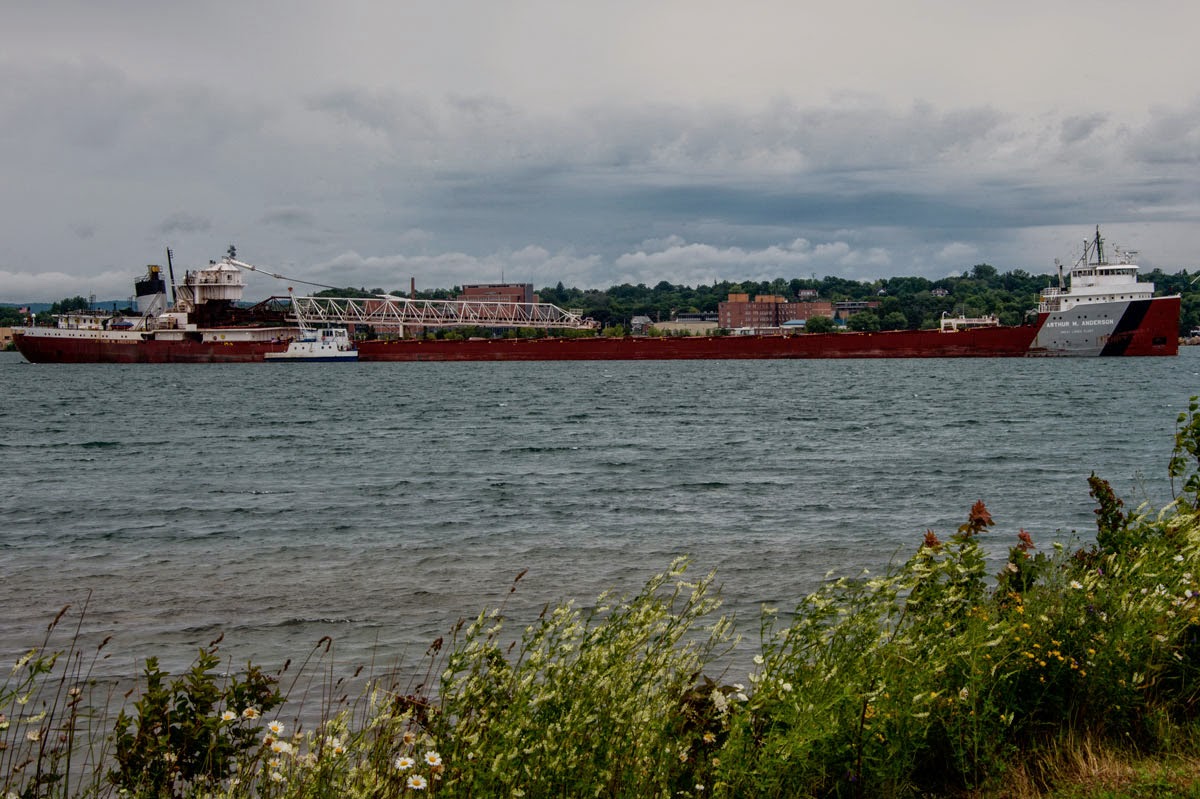 I bought the small Soo Locks Guide Book for $5 on the tour boat, and highly recommend both the tour and the book when you visit Sault Saint Marie!!

Posted by Nancy Kissack at 5:10 AM