Are You Ready For Some Football???

As you can probably tell, we made it to Green Bay Wisconsin yesterday, home of the Green Bay Packers Football League!!  We couldn't leave here without touring Lambeau Field and their new multi-multi-million dollar renovation!!  I'm not really much of a football fan ... I prefer baseball ... but I'll do my best here, because it really is an impressive stadium.  Here she is ... Lambeau Field ... in 1957.  When originally built, the stands held about 5,000 people and cars were parked in fields and neighbor's driveways. 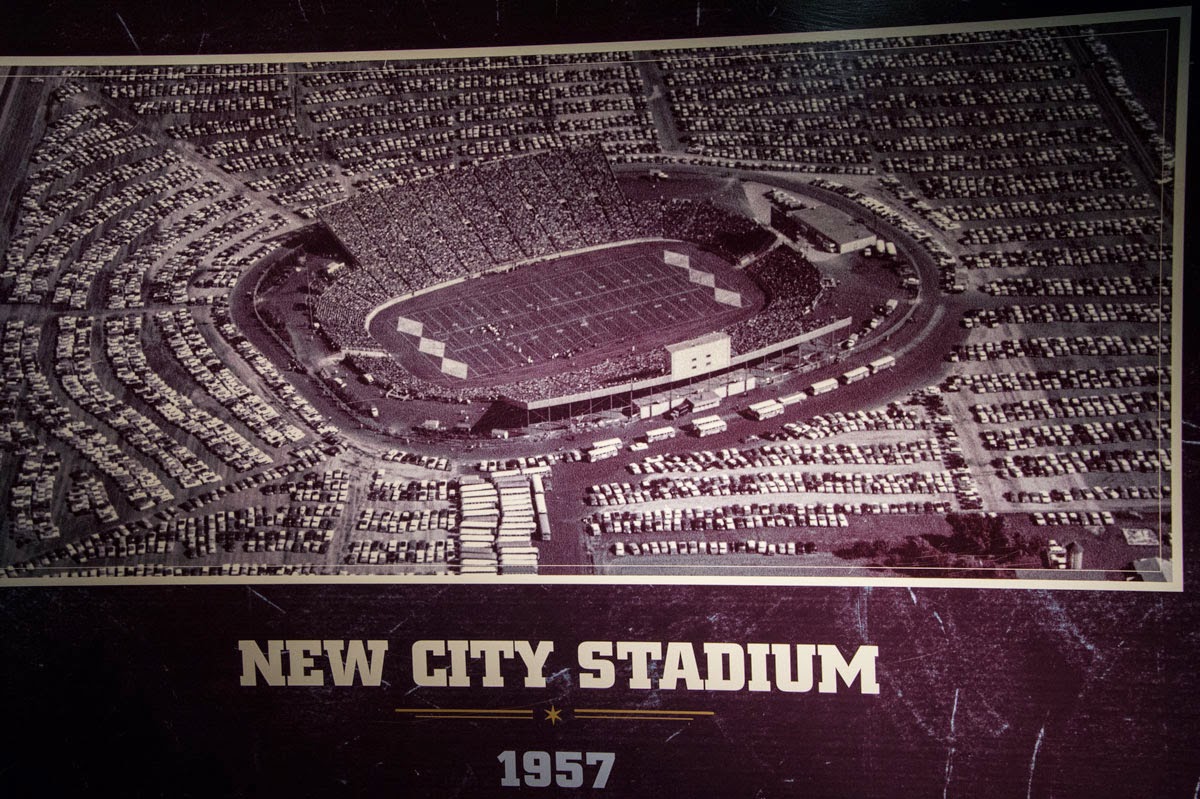 Here it is in 2003, an amazing renovation for a publicly owned football team.  There are seats here for 80,000+ people, with a waiting list for season tickets of over 100,000, the tour guide said.  I guess you shouldn't hold your breath.  The most recent renovation is still on-going, but unless they go UP, there's no more room for extra seats.  People still park in neighbor's driveways. 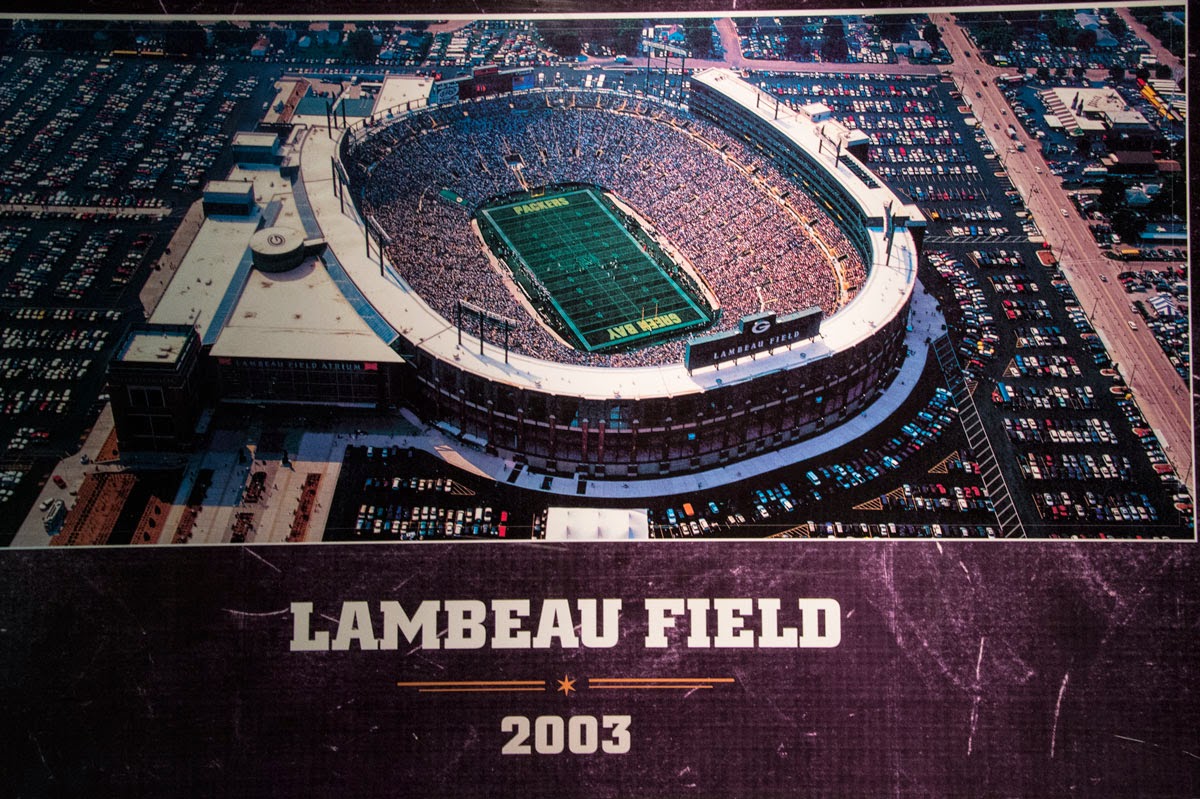 It's pretty impressive, with an entire football field laid out on the first floor.  There's so many stairs that an elevator was built just to get you to the front door.  The new renovation included a huge surround system and heated concrete floors in the stands to keep the snow melted. 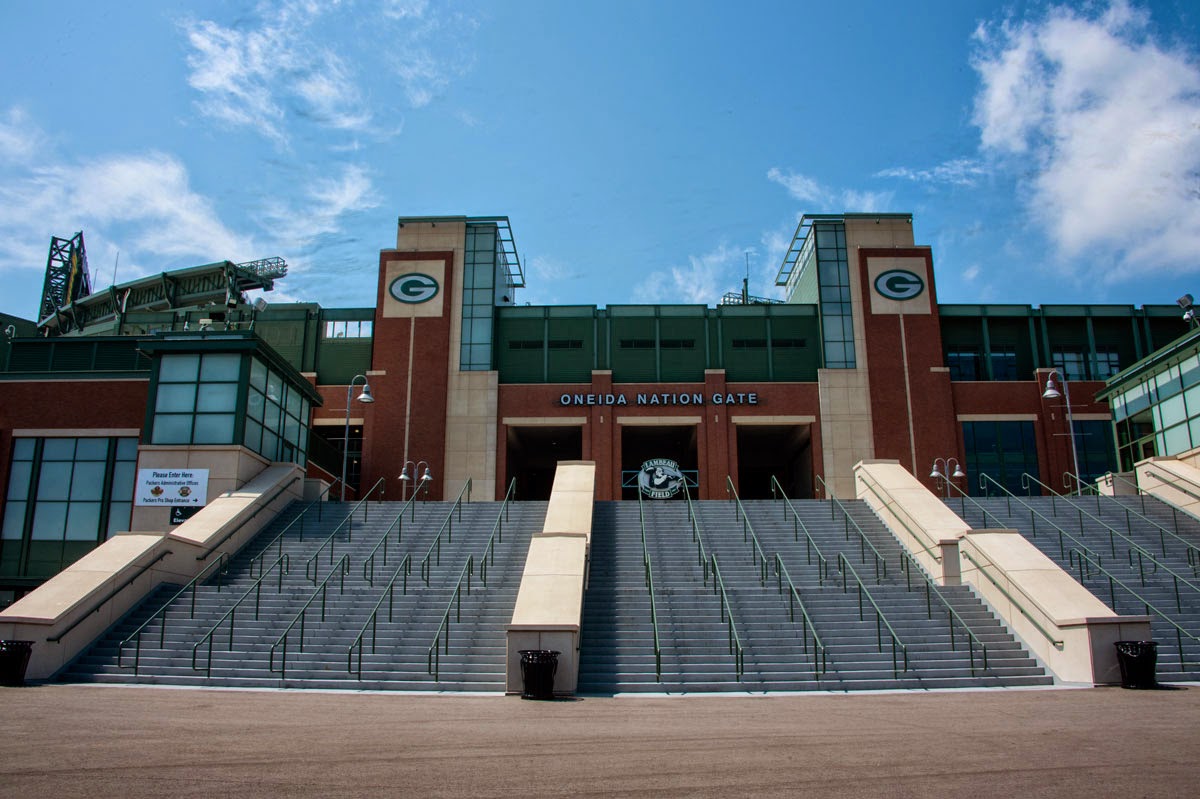 The view from the suites is pretty sweet.  With 166 of them available for yearly lease, they are raking in the money, which was the point of all the renovations.  They only play 10 ... count them, TEN, games a year on this field.  They don't even practice here because they might mess up the grass.  By the way, the grass is Kentucky Blue, laced with gabillions of plastic strings 7" deep to keep it all intact.  With such a price tag on the grass, they have to practice across the street. 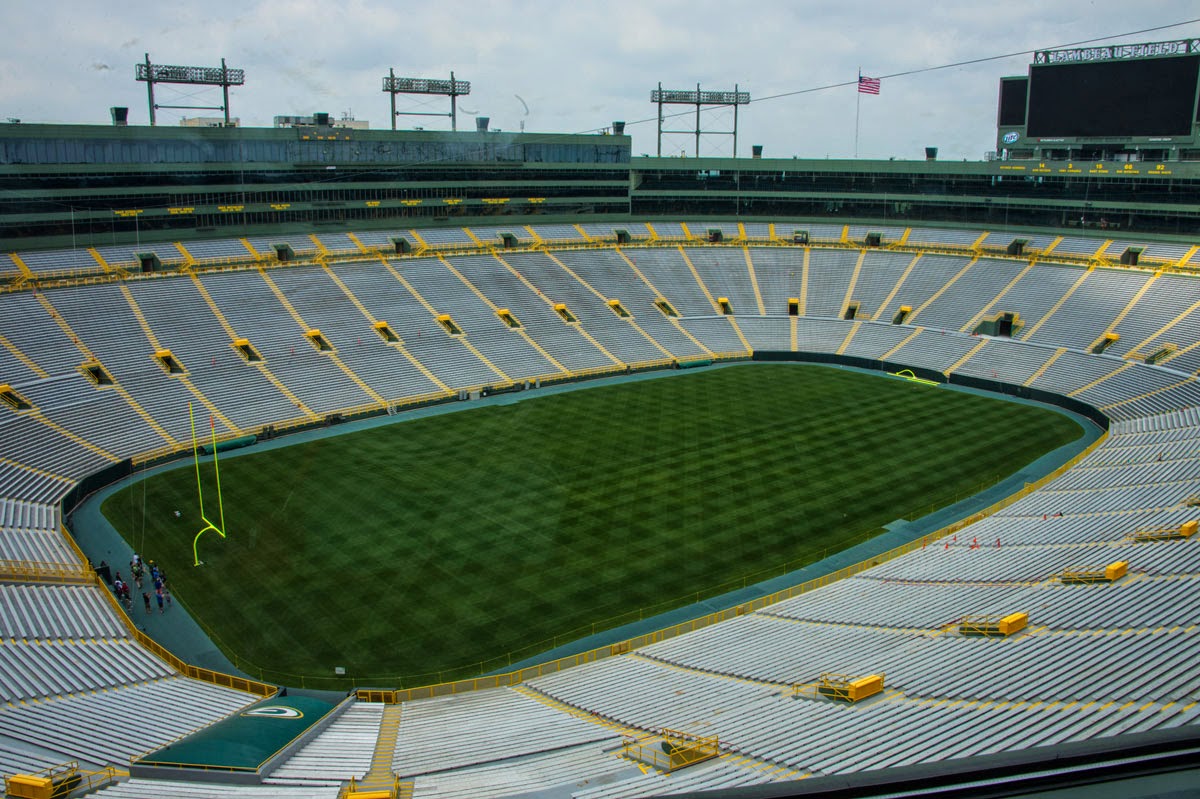 This was your view if you were Bart Starr ... running out to the field.  Since they wanted you to have the REAL experience, as we walked through the hall, fans cheered as we were announced as the CHAMPIONS!!!!!  I have to say, this part was a pretty cool experience ... as a photographer, we would kill to get in this hallway during a game!!! 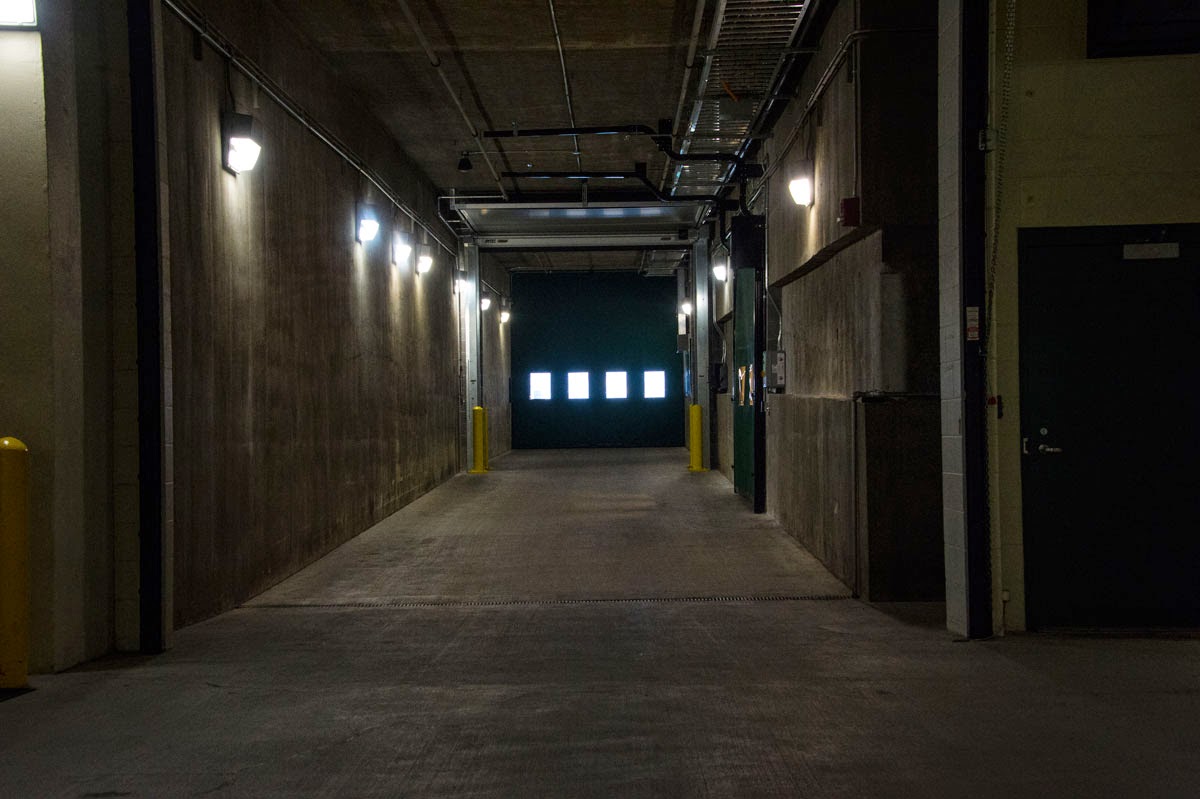 Standing behind the goalpost on the field was pretty impressive too.  This is a brand spanking new goalpost to boot ... with the arms reaching an additional 5 feet into the air, according to the new rules.  This one was just installed the day before.  The acoustics here are beyond belief.  We all yelled Go Pack Go and you could hear it echo around the entire stands.  With 80,000 people screaming, I don't see how you could concentrate on playing football!!  The noise must be deafening!! 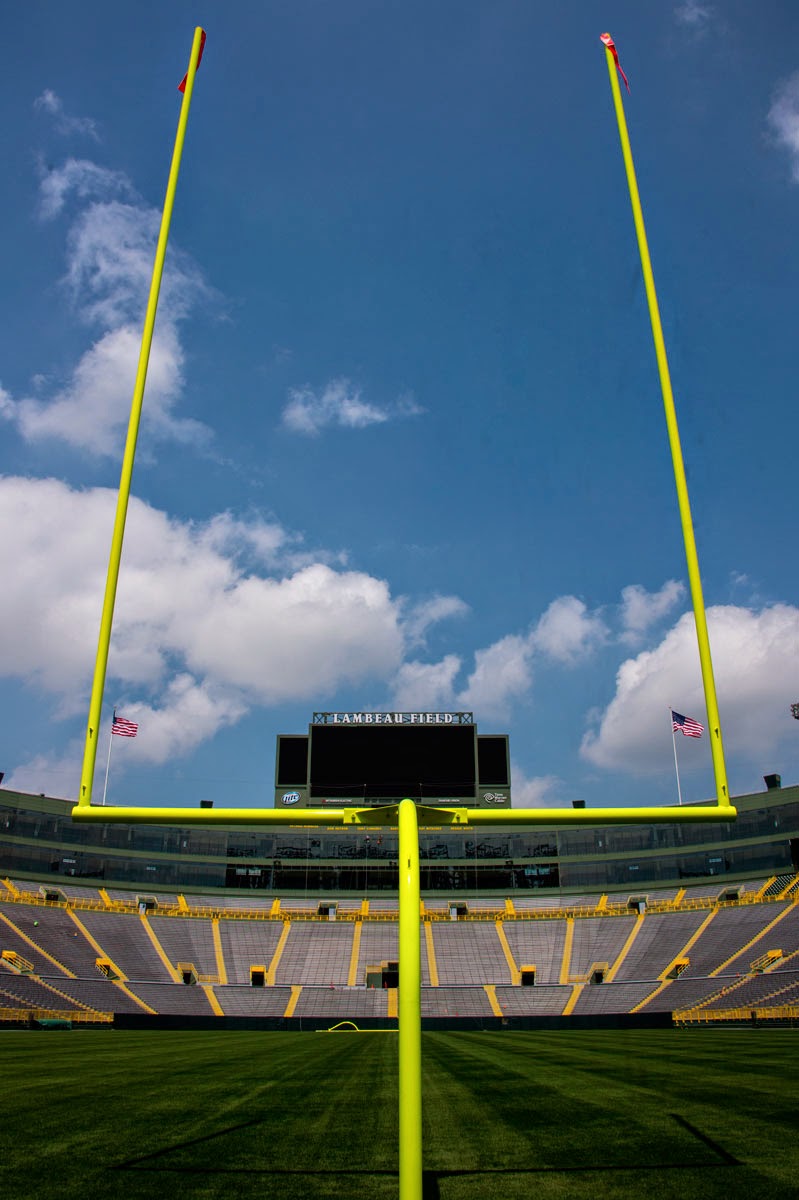 Even if you're not a football fan, if you are anywhere in Wisconsin, it is totally worth the drive to Green Bay for this tour alone!!  It took about an hour ... but if you want to stay longer, take the premium tour for 1-1/2 hours!!

Next up ... the National Railroad Museum.  I didn't KNOW there was a National Railroad Museum ... and it's right here in the Green Bay suburbs.  If you have been to the Museum in Sacramento, this one won't flip your skirt much ... but they do have a couple of "greats" here, including Dwight D. Eisenhower's command train.  Unfortunately, the engine was covered from top to bottom and the cars under minor renovation, so I have no pictures of it at all.  This brute was outside in the shed, along with many others like her, waiting for some TLC. 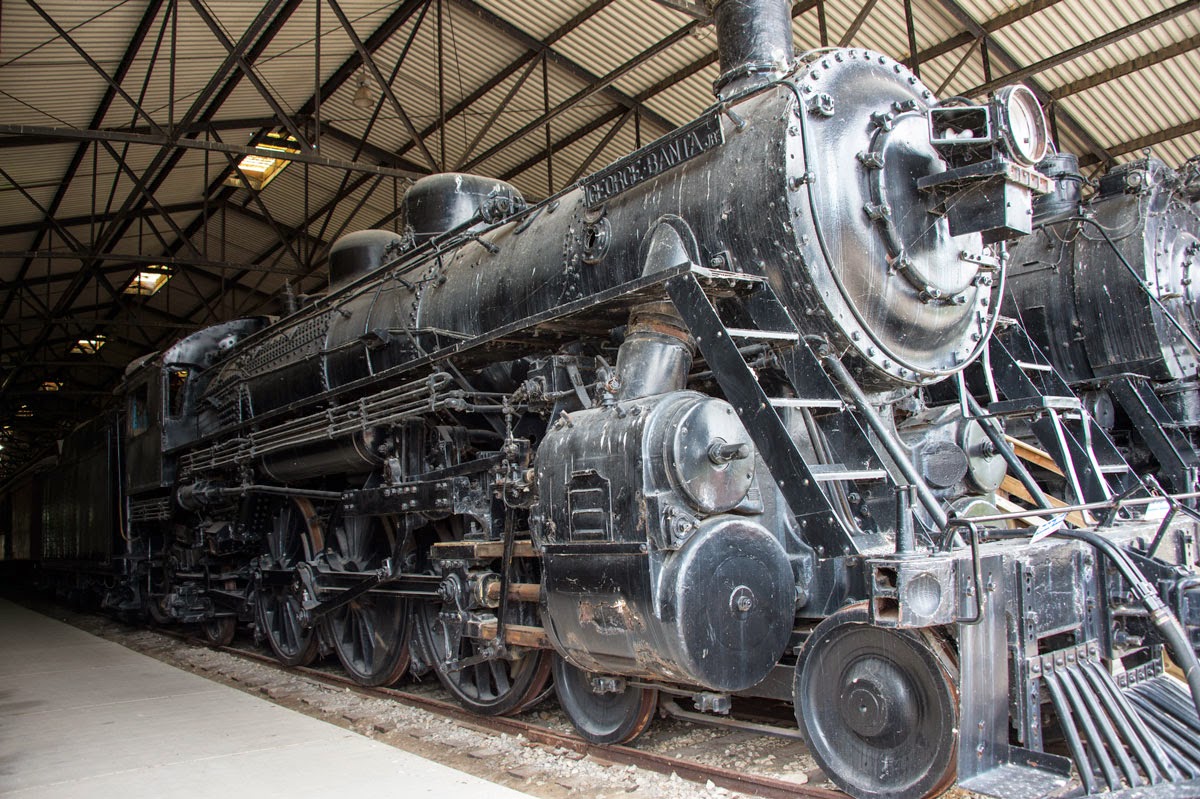 Here's an interesting tidbit ... have you hear of the trains highballing??  This is where it came from!!  These red balls were placed next to the tracks before the stations.  If the ball was at the bottom of the post, it meant they should stop and pick up passengers and/or freight.  If it was at the top, like shown here, the "high ball" meant they could scream on through without stopping, making for a much faster trip ... or highballing!!  This was a new one to me!! 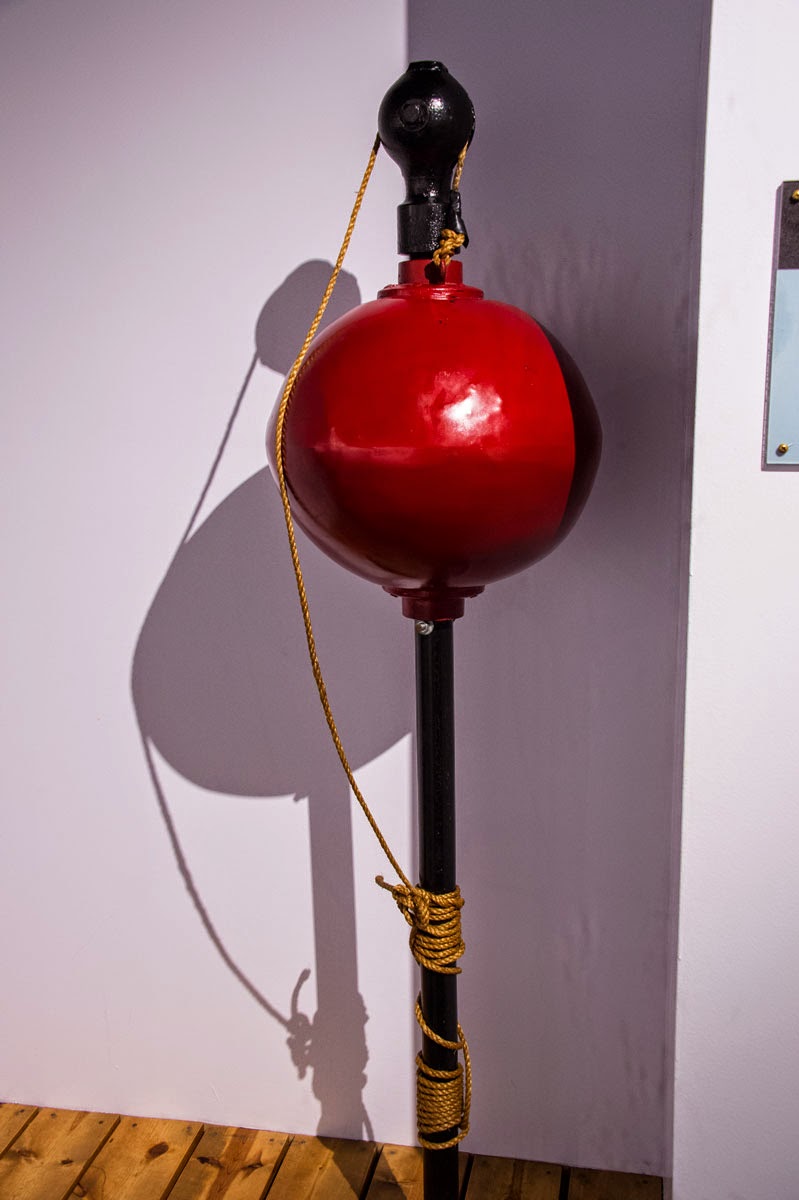 Here is a small replica of the AeroTrain, so named because it was built to resemble an airplane, to encourage passengers to buy tickets ... hoping you would think it was as fast as flying!! And can you believe it??  They have the ACTUAL Rock Island AeroTrain out in the shed. 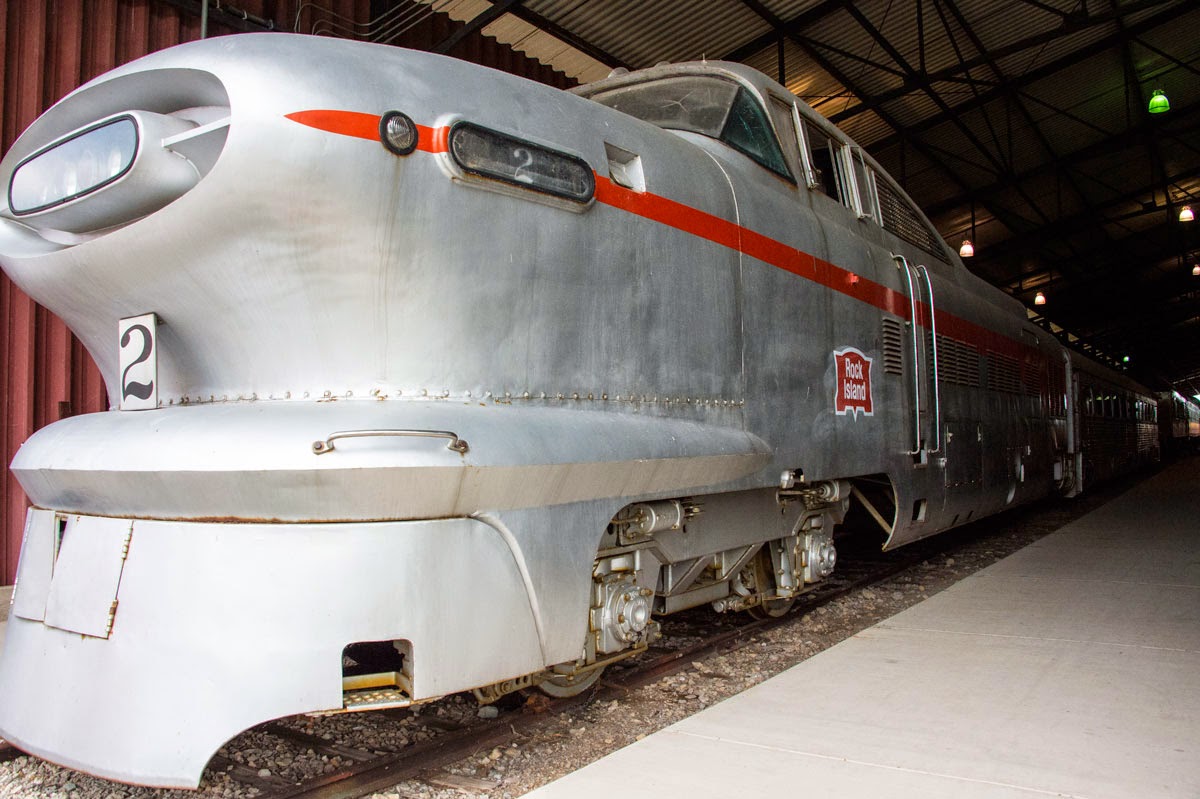 The museum's main attraction however, is BIG BOY!!  This brute was built to haul freight over the mountains from Utah to Wyoming.  I thought there was only one ... but actually eight remain, seven of which are on static display, including this monster.  One, #4014, has been used once a year on a trip to Denver and is currently undergoing restoration for excursion service.  Being a 4-8-8-4, she has an articulated frame, allowing the engine to make the curves without destroying the track. 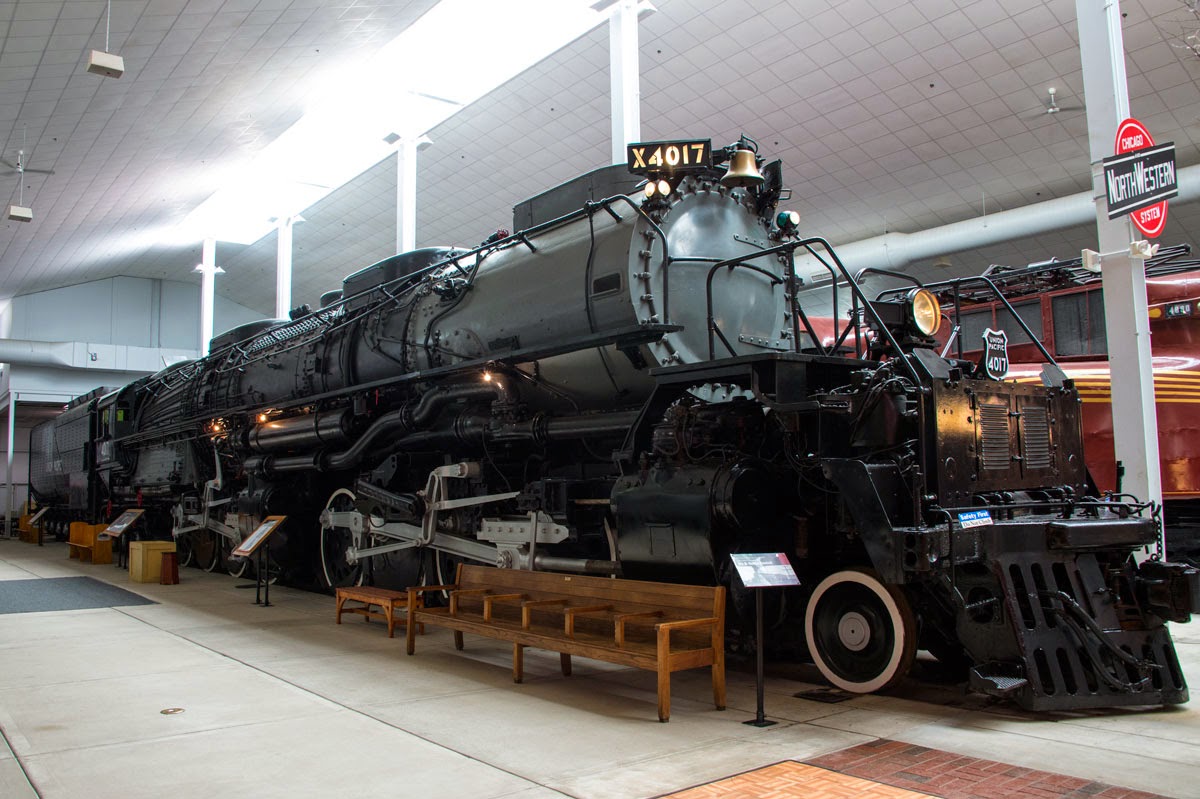 This is a monster of an engine that I kept walking around and around.  It's just an awesome display of workmanship ... that all these huge parts and pieces could actually all work at the same time, pulling 5-1/2 miles worth of railroad cars on a flat track.  Now THAT's some power!! 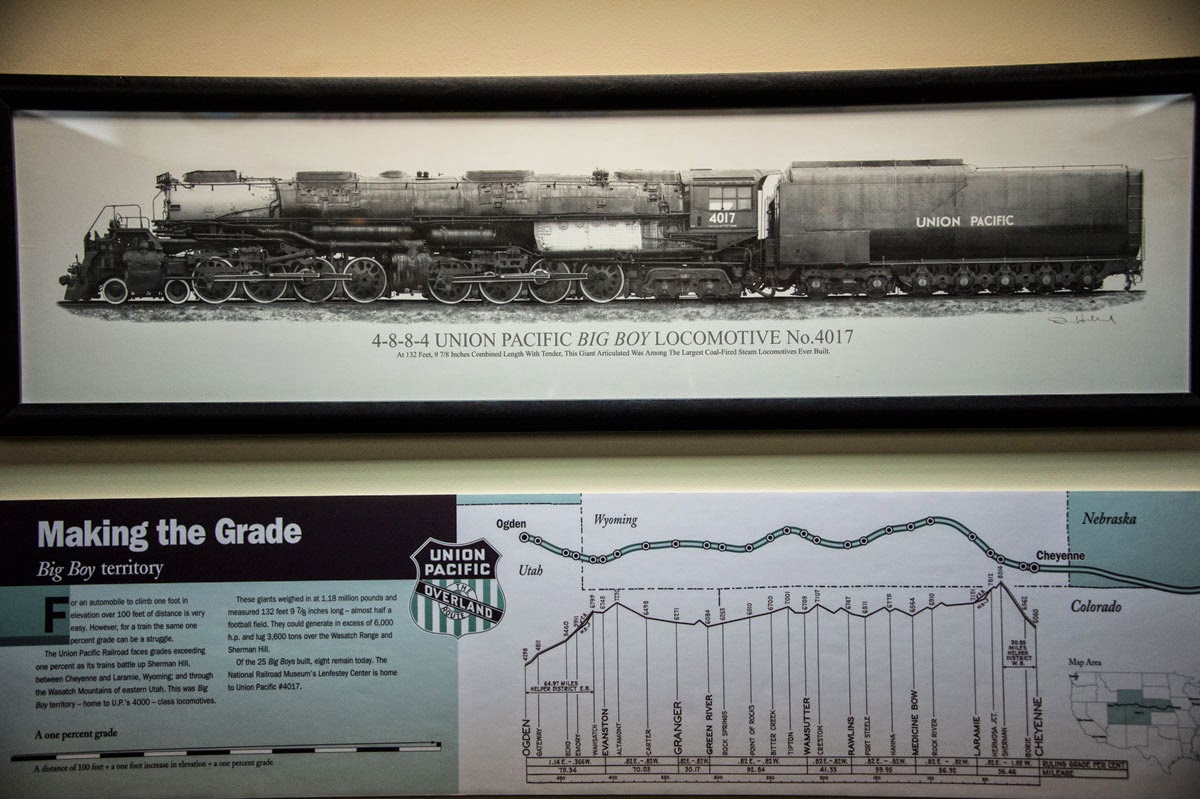 As the Engineer, here's what you would be looking at.  My oh my ... what if you turned the wrong handle the wrong way!!!  This must have been crazy complicated to operate!!  You can see the fire box with the door open.  Coal was augured in from the car behind ... there's no way men could shovel enough coal to keep this baby running!! 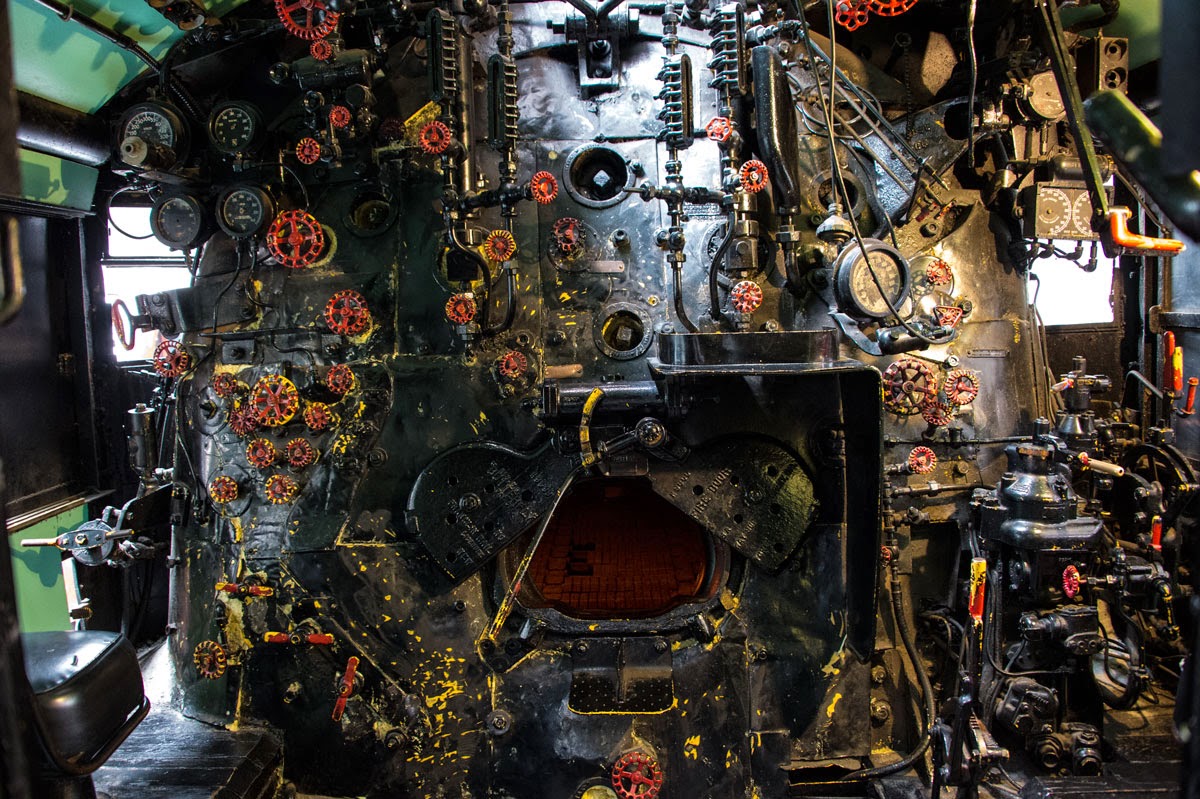 Ever wonder what that fire box looks like inside??  Well here you are ... inside Big Boy's fire box, and let me tell you, it's HUGE!!  I'm pretty sure I could stand up inside!! 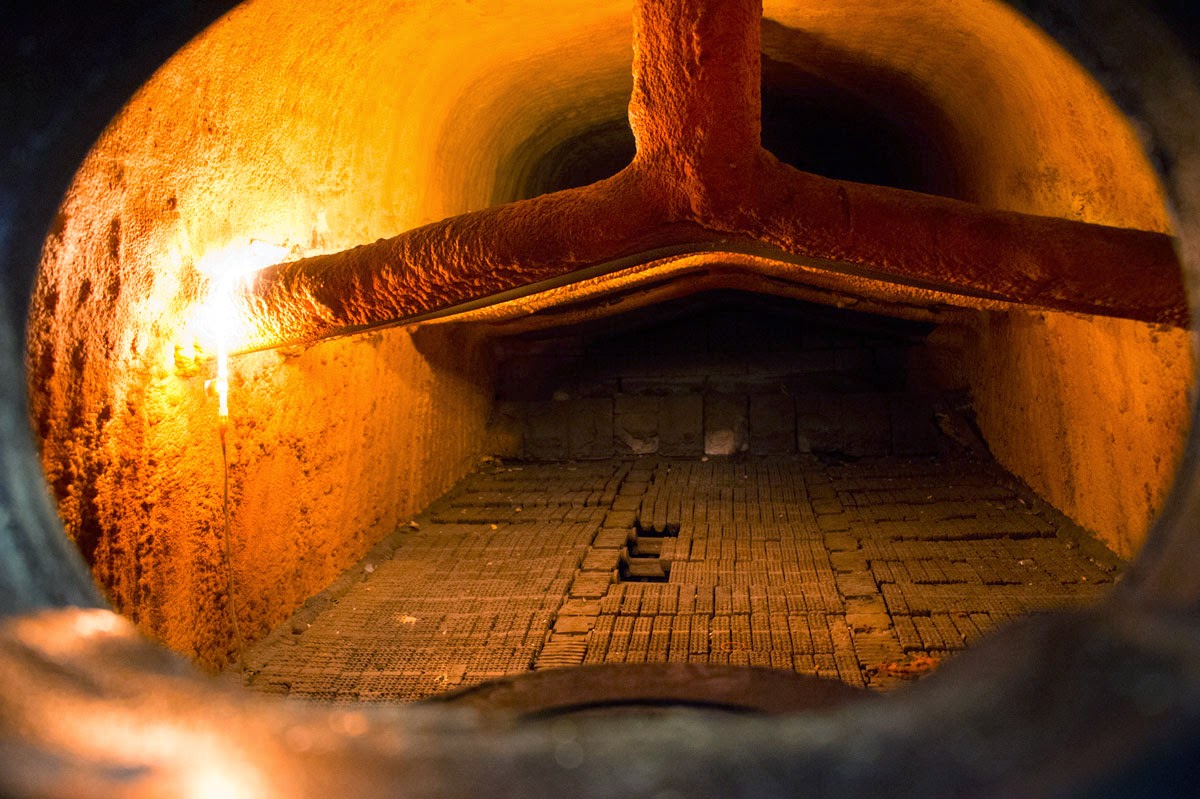 I really wanted an image of the driving gears, but this is the best I could do.  I entertained the idea of moving all the boxes, benches and signs out of the way, but there were too many employees running around ... so I crawled under the wooden stairs (going up to the engine next door), then partway under the engine itself, layed down and got this shot.  I'm sure everyone thought I was crazy, but I didn't get kicked out ... and I like this picture!!! 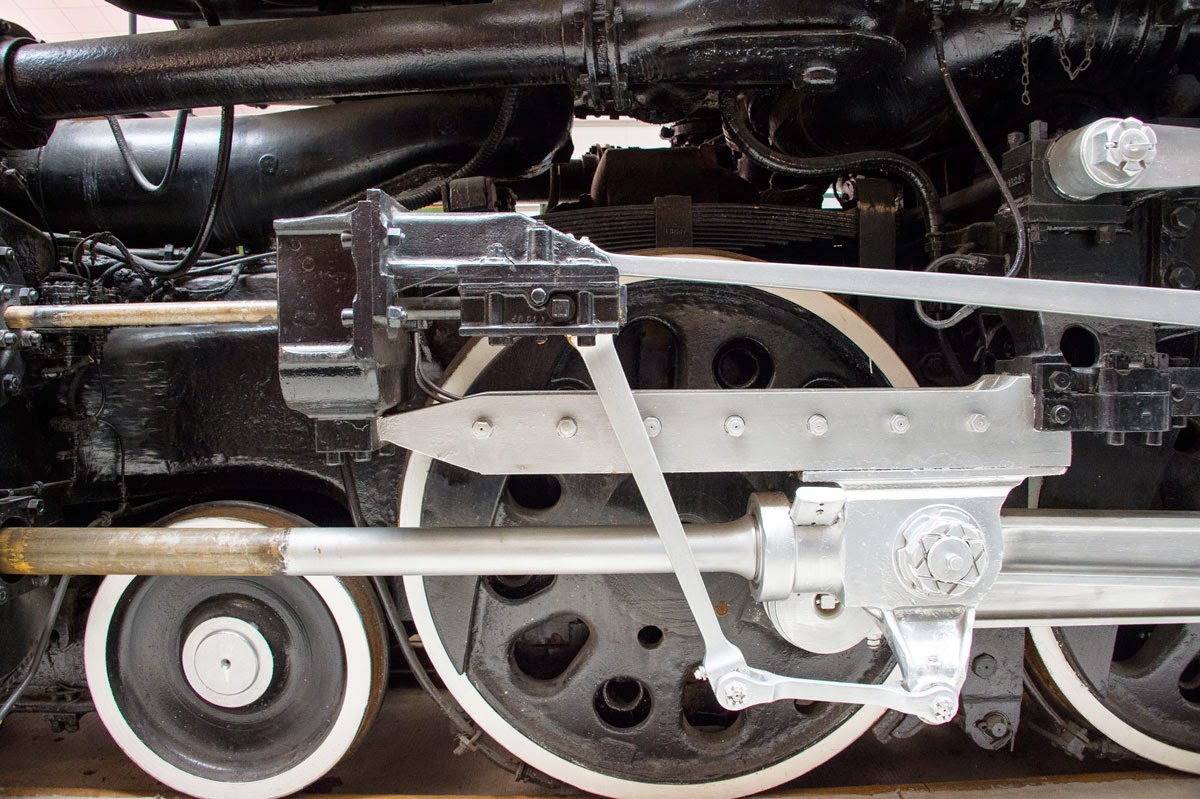 There was a very nice exhibit of Pullman Cars and the Porters who worked on them.  Although not restored, this one is in amazing shape, including the gray curtains in the back, used to block off your bunk.  In between the seats in front were sliding doors that blocked the aisles for "family rooms". 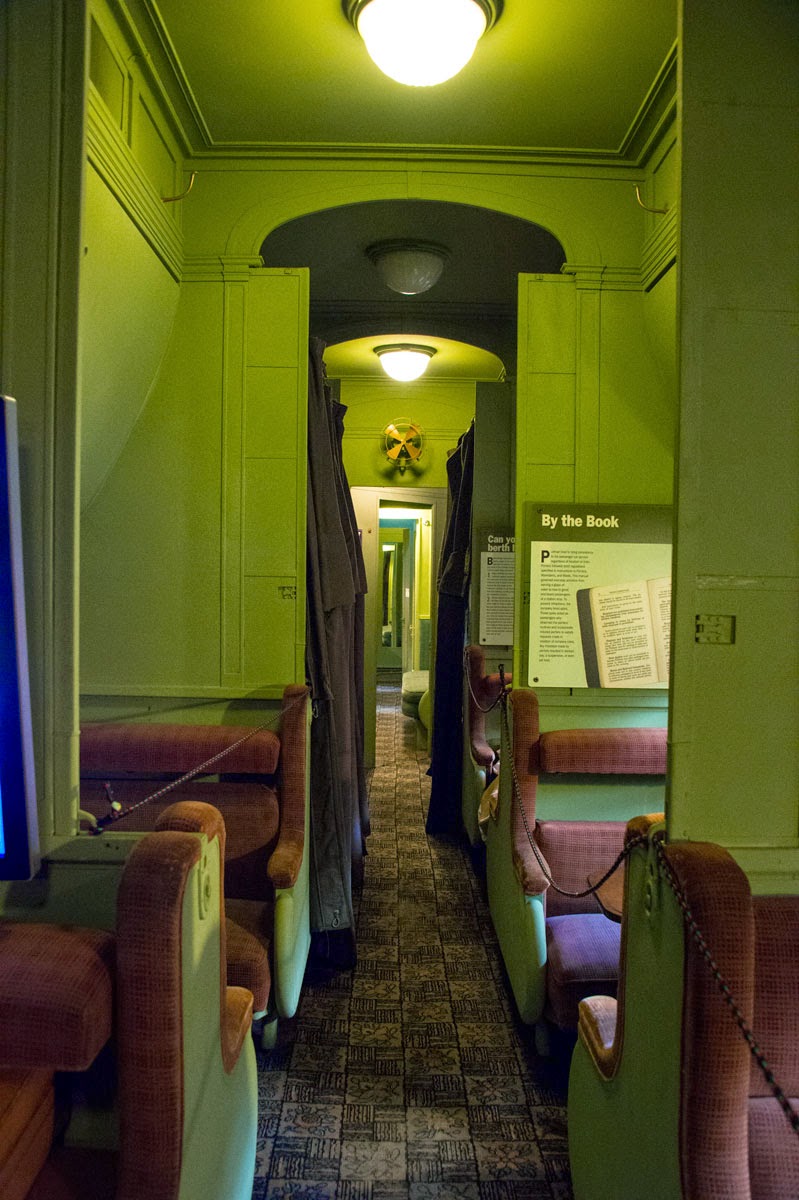 Although some had their own bathrooms, this was the community facility. 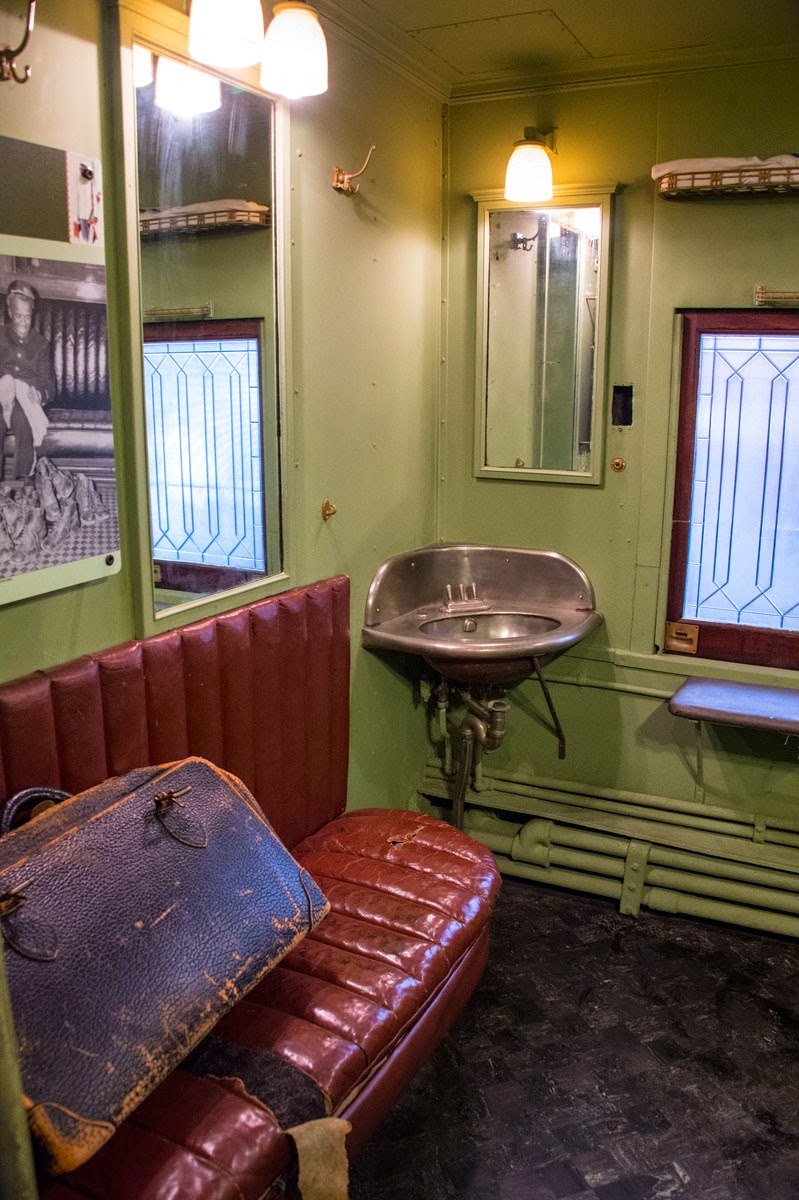 As I'm sure you know, the upper bunk pulls down to make the second bed.  They even have original bedding and coat hangars!! 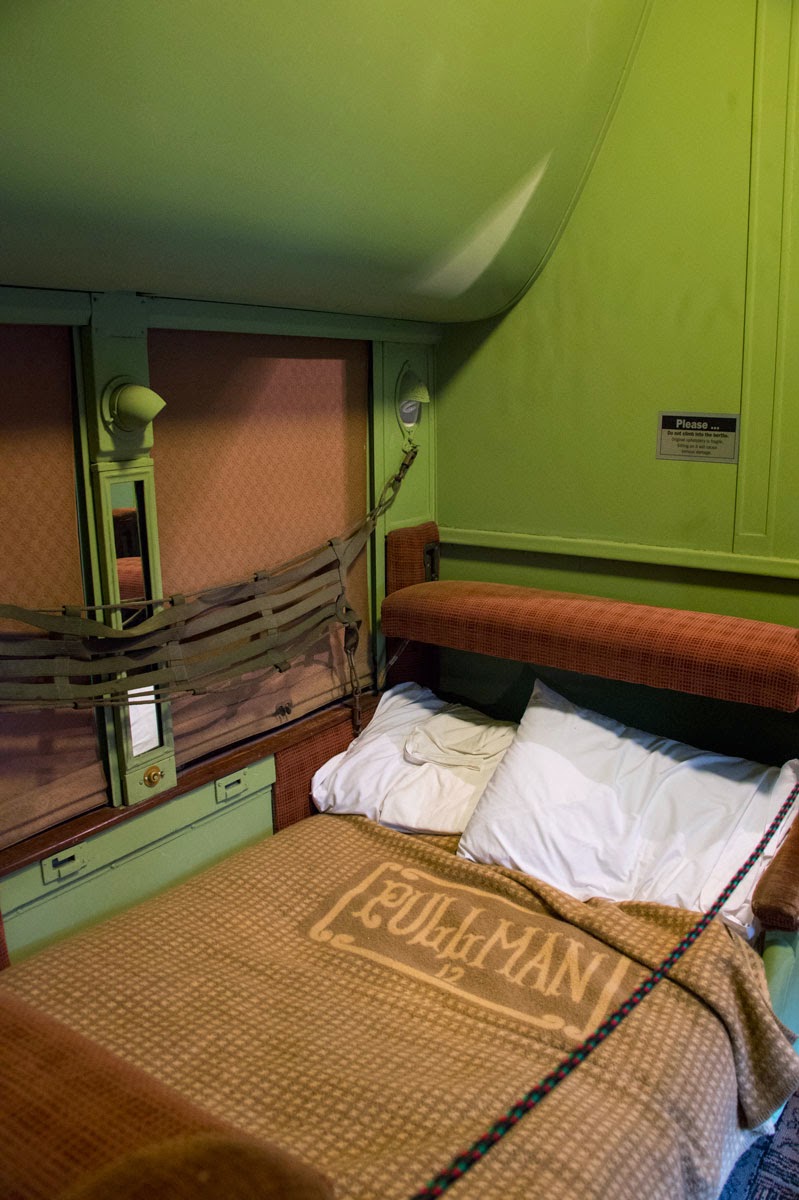 A great find here in Wisconsin ... the Grattitude Train (sometimes called Mercy Trains) delivered to each State in the U.S. full of goodies from France, as a thank you for ending the war.  This one has been restored beautifully, unlike cars from other States which were just destroyed!! 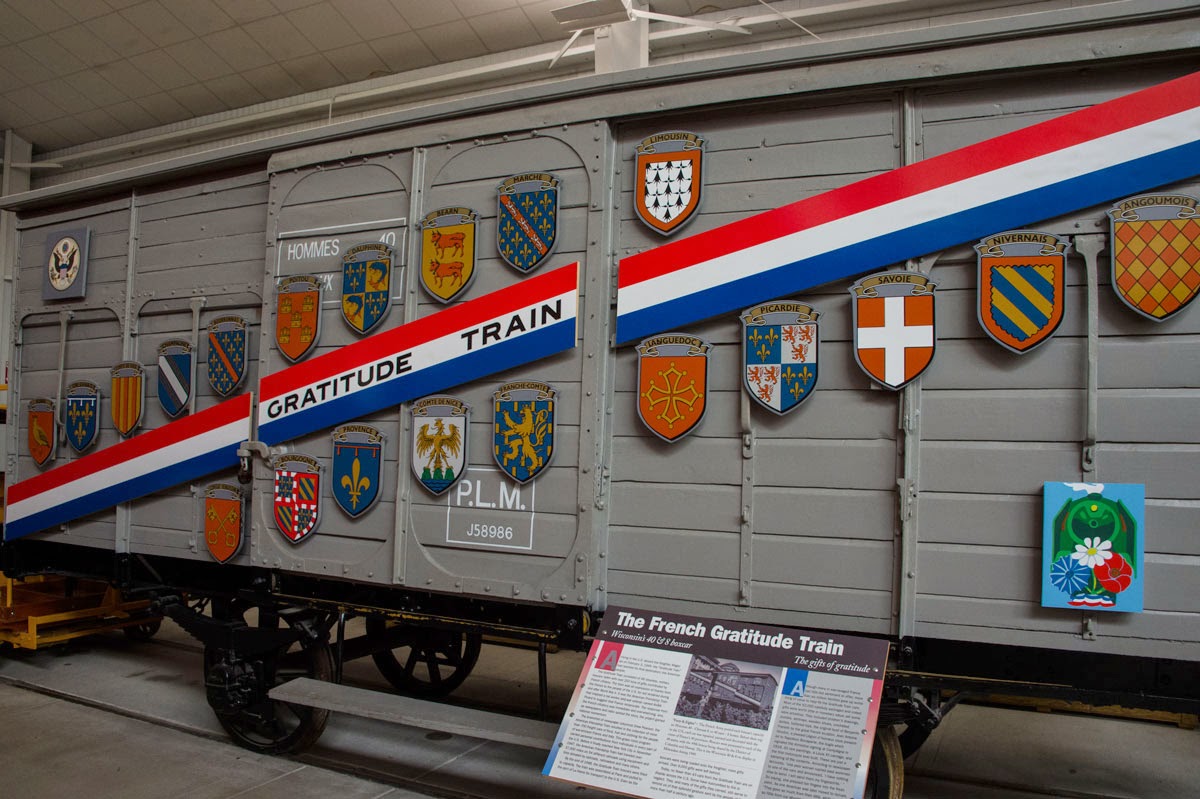 A collection of train drumheads is lit up inside the building ... these things are very rare and wonderful to see!!  As you touch images on a computer screen, you are given a description of each railroad it represents. 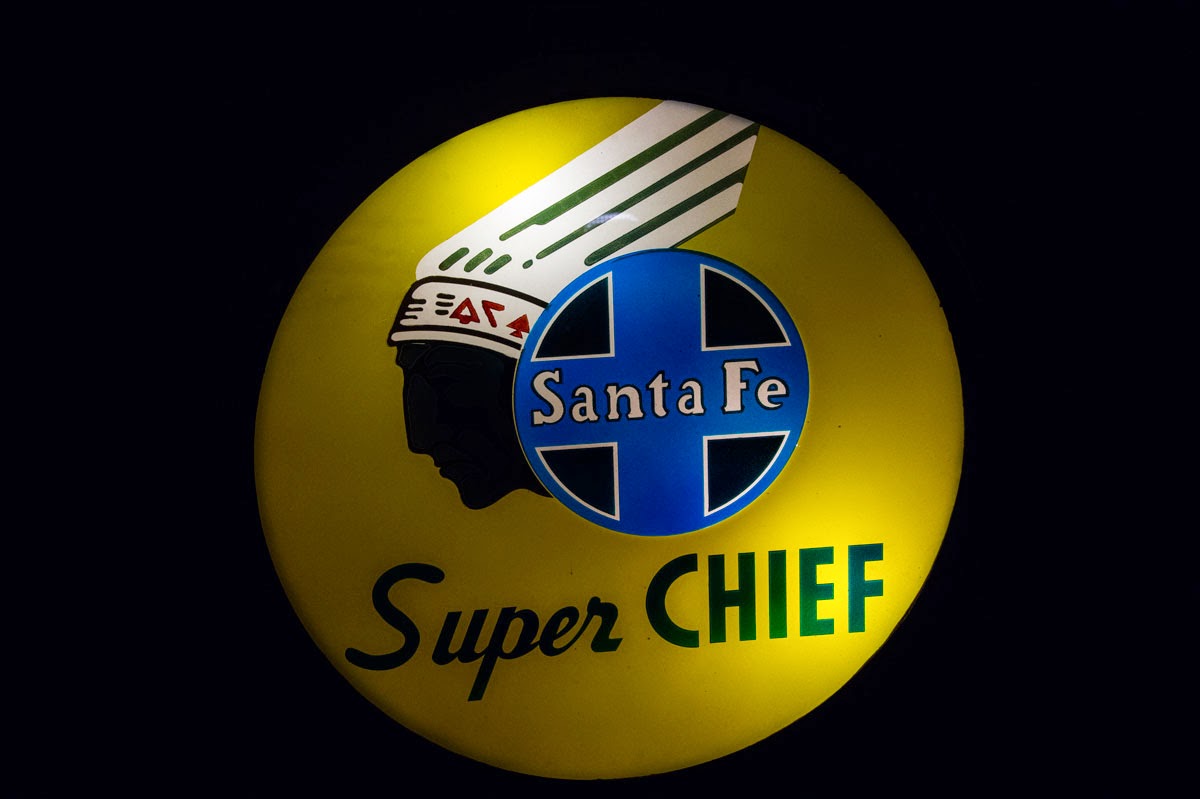 Ever heard of the Phoebe Snow??  A passenger train run by the Delaware, Lackawanna and Western Railroad, through New Jersey and Pennsylvania from 1949 to 1960.  Being from California, I've never heard of it!!  We could have spent another three hours here, but it got VERY hot and VERY humid ... so much so that we got a Weather Warning!! 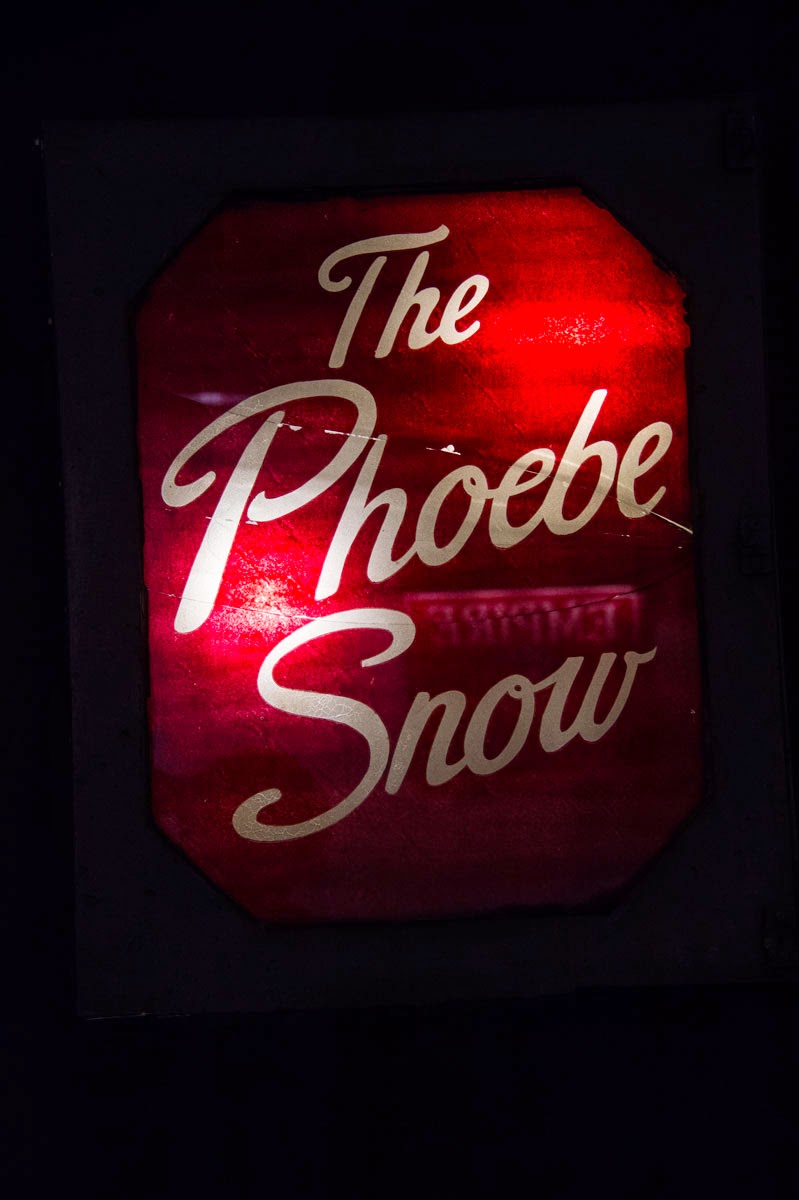 While I cooled off inside, Barbara and Tom rode the little train around the park.  Definitely not the Sacramento Museum, but it does have a Big Boy, making it worth the $8.00 entrance fee!!

Dinner at Golden Corral was a good end to a nice day in Green Bay.  It would have been nicer if the FedEx guy had delivered my two packages like promised.  The tracking info said it arrived at their station at 1:30 pm.  The driver said he tried to deliver them at 12:45 ... uhmmm something doesn't compute here.  I called to complain, and have been assured I will receive them today ... they will be left at the office as I requested!!  WE SHALL SEE!!!!!
Posted by Nancy Kissack at 5:58 AM