Once upon a time in a crime-ridden, completely broke and out of control State, there was a recall of the governor because of his punitive unlawful executive orders.  I have no doubt the State will not be recovering any time soon, but at least once in a blue moon, they do have nice sunrises.  Yesterday was one of those days.

I have to ask who turned up the heat however.  One day it was a lovely 75 degrees, which turned into a 92 degree heat wave in the snap of a finger.  Out came the short shorts I never EVER wear anywhere but at my house.  It's a harkening back to the 60's ... hot pants and short shorts.  I'm sure you can relate.

When you are young and only weight 118 pounds, you can wear anything ... and we did.  There was nothing quite as melodious as these three, since thankfully those horrible patterns of fabric had not yet been invented since Star Wars was only a thought in someone's brain.
As kids that age trying to hold down a job as a secretary to 20 companies in a huge Denver complex, we all purchased fabric (1/3 yard to be exact ... that's 12 inches) and sewed up the side seam.  Instant mini skirt.  We switched tops to make it look like we had more outfits than we really did. 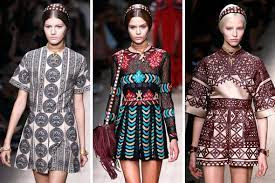 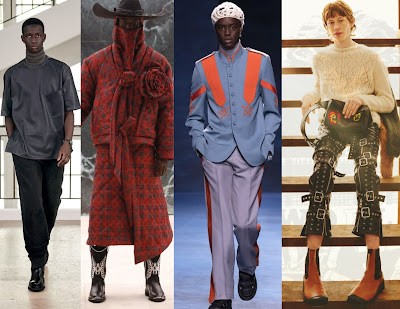 I'm sure someone SOMEWHERE is wearing this to a nightclub.  Wouldn't you just die of embarrassment if you were the guy that had to model this???  I think I would have to get paid big bucks to be caught in this on the runway, let alone the street!! 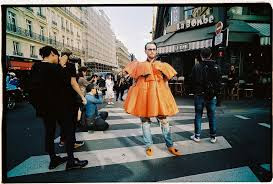 All that brings me to MY shopping spree yesterday.  Apparently being an officer at the Elks Lodge requires a range of outfits which do not currently reside in my closet.  Although it might be rather fun to wear the Halloweenish outfit above (you know Halloween is my favorite holiday), it was not on their "approved" list.  Khaki pants were.
Lucky me, I actually found a store of women's clothing in town that opened at 10:00.  I arrived at the appointed time to find a line out the door.  There must be a sale going on.  Yahoo!
I was helped by a lovely lady who didn't say one word about masks.  How refreshing!!  She found several things for me to try on.  Yes, we actually get to put the clothes ON to see if they fit.  I was needing the color khaki.  I suppose that is open to interpretation.  I took full liberties.  I think the great pair of pants I found are more grey in color, but at least they aren't Levis.
A little pricey at $79, beggars can't be choosers.  Unfortunately for all of us, big loud flower prints are the hit of the day.  I tried some on because you never know.  In a flash, I definitely KNEW they weren't for me.
That's when the nice lady brought me THIS little black number.  Ugh ... that's not my style either, but I tried it on to make her happy.  OMG ... I was in shock.  This fit so nice and looked like I was on the Paris runway.  I'LL TAKE IT!!! 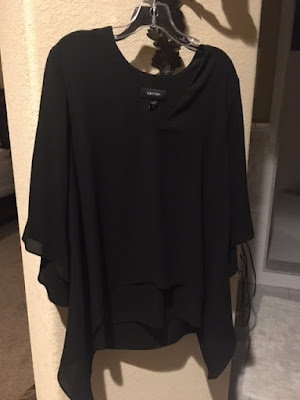 I should have looked at the price tags.  I ended up with two tops and two pair of pants.  I'm not even going to tell you how much I paid for them.  Let's just say I'll be eating hamburger for the next twelve months and then some.  It's the perfect time for a diet anyway.
I spent the evening saying oh well ... easy come ($$$) easy go ($$$$$$$).  My Jessie girl wanted to snuggle up on the couch, so we did.  She's 15 now, can't hear much at all and can barely see to jump up on the couch.  She deserves a little Mom time. 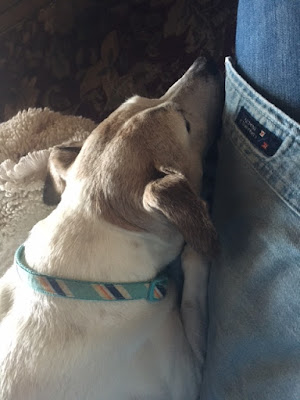 It's Saturday ... which means absolutely nothing when you are retired.  It's just another sunny day here in California.