The sweet smell of waffles has been replaced.  You KNOW what I'm talking about.  The WAR has resumed since confirming the availability of a prisoner of war camp several miles away.  I feel pretty beat up, having survived thus far on MRE's ... leftover egg casserole to be exact.  It may be fine when it's fresh out of the oven, but as a leftover it's ready for internment.

Here's the video from the day before with the enemy digging trenches in the flower bed.  It was a small one, comparatively speaking.  That being said, you still need heavy boots to walk in my corrals since the weeds obscure their handiwork.

This little brat, and I only say that because he is little compared to Big Mamma, didn't appear to hang around long.  Pretty much looks like he's on a mission to me!!

Leaving my patio lights on has helped.  They seem to hang out at the edge of the lawn, about 20 feet from the main part of town.  Thank goodness Miss Jessie can't see any more or I'm sure there would be some skirmishes along the line.
Just when you think it's safe to go outside ..... DANGER ..... DANGER .. WILL ROBINSON!  The Dark Troops have invaded again.  Not only do they dig trenches, but they have their own built-in poison gas bombs they can throw at you.  Watch this one carefully.  When that tail goes up, you better RUN!!  Something in the corral definitely disturbed him.
And so the strategic battle begins anew!!  I took the cage apart, getting rid of all the mud, dirt and pieces of plastic they chewed up previously.  It seems to be working, but I'm not sure the enemy weighs enough to trip the door spring.
The golf ball?  That's actually the egg I put in the trap two weeks ago.  I've discovered the enemy LOVE raw eggs, and boy is this one raw NOW!  It's bait if you will.  I'm fishing for black and white skunkfish with eggs, old cat food and Mexican casserole.  Here's hoping they bite!! 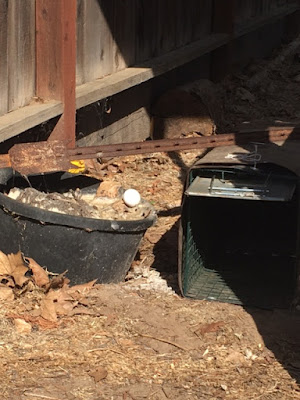 In the meantime, I'm happy to say I'm not sore from flinging full sheet pans around in a hot kitchen, but I am rather tired.  I spent most of the day on the couch, a pastime I'm not fond of.  Today will be spent house cleaning and going for groceries since company is coming!!  Back-up Troops for the front line of the war.
We have now gone dark.  All the motion sensor lights have been turned off.  Shhhhhh don't make any sounds.  The TRAP IS SET!