Another Black And White Project

The THIRD skunk saga is finally over and done with.  I must be getting used to it because I didn't have the dread I normally experience when I hear that scratching and digging.  Will they come back?  I live in my own little fantasy world where I'm sure they will be happy as clams in that burned out forest and leave me alone.  Yeah, I also know their cousins will be back.  Big sigh!!

In the meantime, I'm happy to announce the problem at the Lodge was quickly taken care of.  It turned out to be a mere reshuffling and all was well.  Yay for wonderfully smart and talented people.  I love it when that happens.

As a reminder of my recent black and white adventure, my next project involved getting rid of a big problem.  I have no use for the black and white mini fridge in the RV, as I have no use for skunks.  I mean really, I suppose you could fit two six packs of beer in there, but I don't drink beer.  As I looked at how to extract it, the two screws holding it in had already fallen out on the floor.

All I had to do was drag it out and unplug it before almost dropping it on the ground.  I was thinking a free sign on the driveway would work, but Cyndae suggested I keep it in case I sell the RV.   It might be a good selling point.  So into the garage it went with all that OTHER stuff I'm going to sell some day.

Oh ... you think I might need it for those RV rallies?  Remember the famous words "I don't have room in my fridge?"  Yup ... that's going to be ME saying that now! 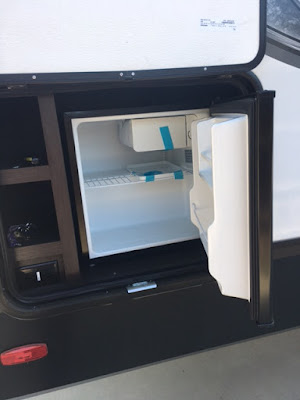 Pretty big hole, yes?  This should hold a barbecue.  As a kid, I probably would have crawled up in here and shut the door, locking myself in forever.  Yes it has happened.  I crawled in my County Fair cattle show box and shut the lid, not realizing the latch would fall down and lock me in.  I was probably 7 at the time.  I really did get smarter as I got older.  It took lots of yelling and screaming for someone to find me. 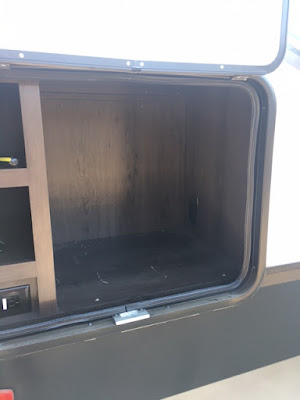 Instead of a body, THIS is what I'll put in the hole.  It's the latest and greatest in BBQ's ... a Blackstone flat top grill.  As with ANY barbecue, it required assembly.  I pulled the beast out of the box and set it on the table.  Hmmmm I said to no one in particular, although Cyndae was standing there.  We couldn't figure out where the gas hooked up.
Oh looky here .... there's another big piece still in the box.  No one said us two old ladies were smart, but if we work together, we actually CAN get things done.  We tried to install the handle ... that took us ten minutes to figure out .... then the top had to fit down into the base.  Got that done when we discovered it has feet!! 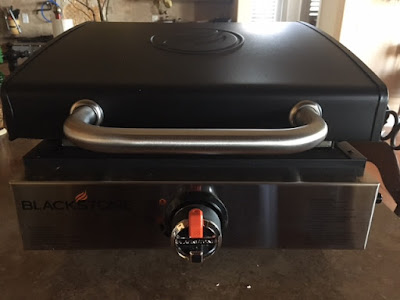 Of course that required us to completely disassemble the thing in order to put the screws in to hold the feet on.  Finally together .... VOILA!!  A barbecue that can cook pancakes and bacon.  That little hole in the back?  That's where the grease goes into a big cup that clips on.  We're in BUSINESS!! 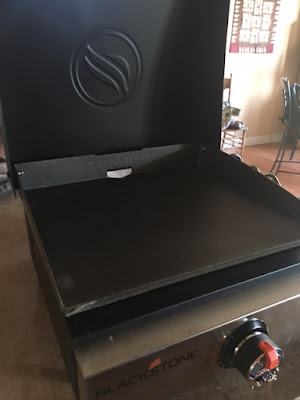 I haven't cooked anything on it yet, but I did finally, just BARELY, squeeze it into the hole.  The styrofoam pieces are to cushion it a tad and keep it from moving around too much.  I have a quick connect gas hookup coming out the side of the RV, or I can use those little bottles of propane. 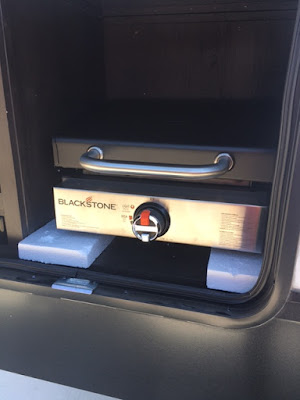 Today I'll remove it and do a little seasoning of the grill before cooking an entire package of bacon at once.  Nothing like greasing it up a little!!

Just for kicks, I set up the game camera again last night.  This morning I'll see if anyone else came to visit!!

Posted by Nancy Kissack at 5:59 AM