Once upon a time in a faraway land called San Francisco, they had baseball games at the best facility on the West Coast.  I was a season ticket holder with good seats when they were actually affordable.  They did a lot for their customers back in the day, to keep you going to games and paying the prices as they went up every year.

You actually own the seats, then purchase the tickets, even including the huge concerts they had several times a year.  Some day I'll tell you about the fight I got in to at the Kenny Chesney concert.  Anyway, some of those events were held in the glass-walled apartments across the street.  When I arrived, there were Giants coffee cups everywhere ... on the tables, on the chairs, on the walls ... and I decided I just HAD to have one.

Okay, I stole it.  Swiped it right into my huge purse when no one was looking and walked right out the door.  It's the only one I savor my morning coffee in while scanning the horizon for skunks and gophers. 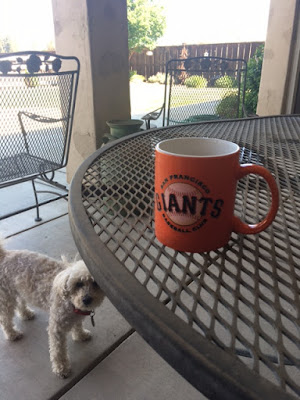 Obviously that also includes throwing the ball.  Cooper is always SO intent!!  Suddenly there was THAT SMELL, followed instantly by a message from my neighbor.  Is that a SKUNK?  Yes, pretty unmistakeable!  And I mean BIG skunk ... like Big Momma big.  There are two times skunks smell that strong.  They either hit a dog more than once, or IT got hit.
I didn't hear any dogs barking, but there was a tractor doing work in an orchard just half a block away, from the same direction as the eau-de-skunk came on the morning breeze.  It must be the tractor that uncovered the hiding hole of my black and white friends.  I can't say as I shed a tear ... I'm just hoping it is gone for good. 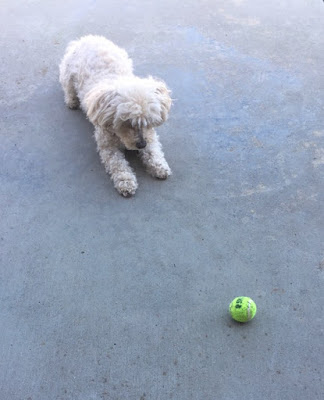 In other fascinating news ..... ONE DOWN!!  This one I know for sure.  My Jessie girl is a rat dog, a Jack Russell terrier who in her prime, used to bring me mice, gophers and all things creepy.  She's a hunter this girl.  I watched as she kept sniffing the grass, moving across the lawn.
I went inside for a second cup of coffee, only to return to see her pounce, grab and shake.  Uh oh!!   I know what THAT means.  Sure enough, there was a lump of fur no longer moving.  I don't know where she actually caught it because there were no holes near this spot.  He got an unceremonious burial in the horse corral.  Maybe now my lawn will remain hole-free and I didn't have to buy any pellets. 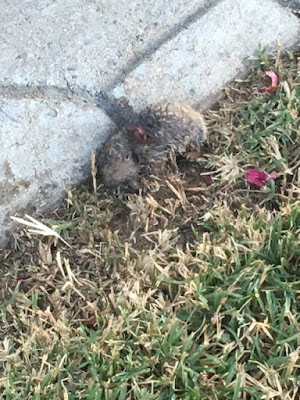 Time for lunch!!  Not that I had any real appetite after the morning's activities, but who can resist a grilled cheese sandwich on sourdough?  There's something about that bread.  It makes me dig in the bag to the middle of the loaf and pull out the biggest pieces possible for my ooey-gooey sandwiches.  Come on, admit it, you do the same!! 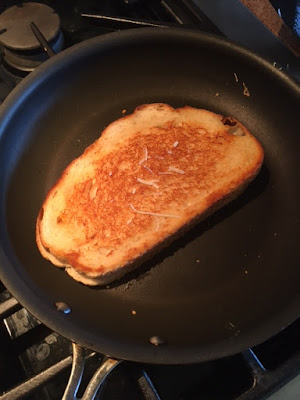 I was SO looking forward to my tasty lunch, but got slightly distracted by Miss Jessie wandering the outside edges of every room, as has recently become her pastime.  RATS and GOPHERS!!  I burned it! 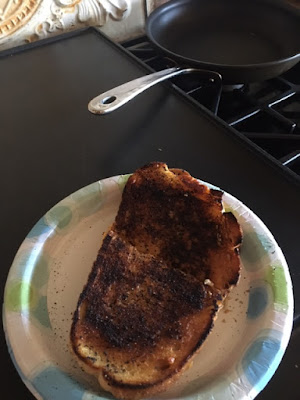 I would like to say I enjoyed the rest of the day on the patio, but alas, the eau-de-skunk kept me at bay.  I finished up the main section of this quilt, which now has to wait for a USP delivery of the border fabric. 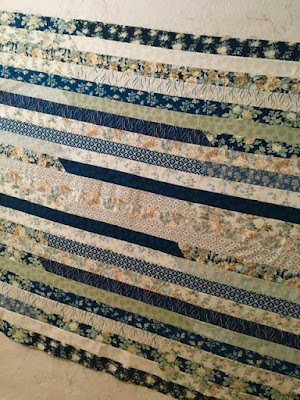 It's Sunday, meaning time for groceries.  Around here it's best to hit the stores before church lets out and it gets really crowded!  In the meantime, gee ... I guess I can start on another quilt!!!!!

Posted by Nancy Kissack at 5:44 AM