Blue Is Not Your Color

Every day is an adventure in fighting Mother Nature around here.  It's almost as bad as the scorpions and rattlesnakes in Arizona.  At least these guys won't kill you ... or so I hope.

They have been mighty busy ... busy as bees ... building a new condo in my back yard.  I noticed it when I was setting up the skunk trap and got bit.  OUCH!!!  What the heck??  I should have paid more attention to where I was stepping.

No worries, my buddy the Giant ORTHO guy stopped by to say hello and accidentally poured some of his 12-month insect killer down the hole.  Hey ... it's cheaper than gas right now, which is over $4.00 a gallon.  Knowing there are trillions more killer ants underground kind of gives me the creeps, but at least there aren't any close to the house any more ..... so far. 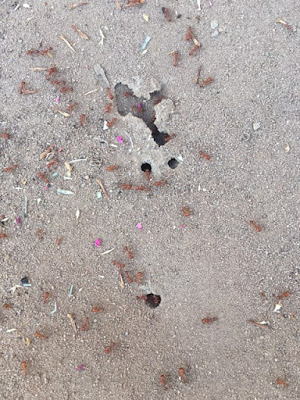 Here I am back with the infamous skunk trap.  It's actually made to catch kitty kitties, but seems to work well for the black and white kind also.  I stuck the entire thing in my garbage can, then proceeded to cut the tarp off.  Whoooeeeeee the smell!!
I have to tell you if you have never smelled a skunk up close and personal, it's not the same as what you smell far away.  It's very acrid and strong ... like sticking your nose in a vehicle exhaust pipe.  I slammed the lid on the bin.  Won't the garbage pickup guys be surprised!!
Then I set the trap in the sun to bake for the rest of the day.  It's on it's side here.  The big dark spot at the top is the door, while the little one at the bottom is the trip that shuts the door.  It's so well made I'm sure it will last me for years of trapping!!  Which is a terrible thought!! 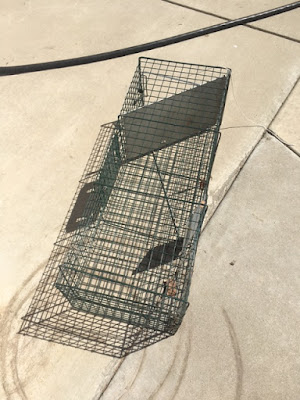 Once the smell was mostly gone, I grabbed a new tarp and wrapped it up, using a little duct tape.  Maybe a LOT of duct tape.  I'm pretty sure blue is not their color (it's a country song), or if they can even SEE in color.  Being the scientific skunk trapper that I am, it's an experiment to see if they care or not.
So far I haven't captured anything on video since the last chapter of Skunk #3.  Gosh ... it may just become boring around here!! 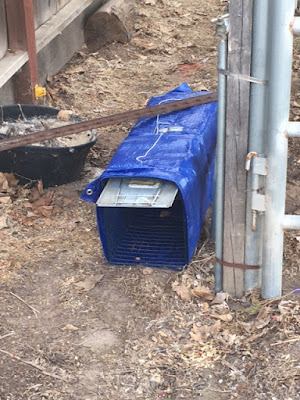 In a feat of extraordinary luck, I actually cooked a great dinner to celebrate the (hopefully) last capture.  I love pasta with freshly cooked veggies.  If you smother it in parmesan cheese, so much the better.  I made enough, not on purpose because you know how pasta explodes in size when you cook it, to feed me for three days.  YUM!!! 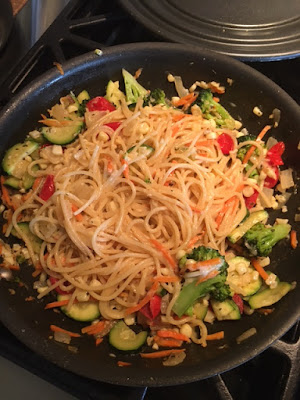 Two big happenings today ... at least in MY world ... I'm checking the video from last night before wandering off to the Lodge to have my portrait taken.

Pictures of all the lodge officers are posted on the wall in case you need to know who to complain to about something.  To be honest, we get more KUDOS than complaints.  We really do have a great lodge with  fun members, even if we are all older than dirt.

That of course means I have to wear the shirt, tie and jacket ..... and Levis.  It's only from the waist up.  The good news is I know the photographer well and am paying him to take twenty pounds off my portrait. Oh how I love PHOTOSHOP!!!

Posted by Nancy Kissack at 5:23 AM