Wandering the grocery store nowadays is an adventure in itself.  If you want to be shocked into silence, just walk down the meat aisle.  I will say that the cattle industry did NOT put on masks and hide in their house the last year.  Cowboys have been out and about every single day taking care of the herds that will eventually end up on your dinner table.

Unfortunately, someone has their finger in the pie.  Cattlemen are now getting around $1.20 a pound.  As a comparison, if we were lucky, we bought calves for 35 cents a pound, fed them all year, then sold them for 50 cents a pound to feed yards who fattened them up.  At the grocery store, you would pay $1.99 for that meat.  That's a 75% markup for processing.

This $8.69 a pound for tri-tip ... not even close to the best cut on the beef ... shows you what inflation can do to your wallet.  I guess I will be hearing "where's the beef" in this house.  Of course it could also be due to the long weekend coming up ... people barbecuing tri-tip and such. 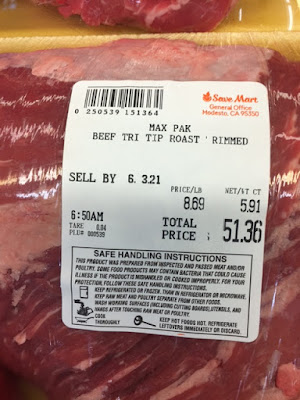 Instead, I bought $1.99 a pound chicken breasts, so big they look like they came off a turkey!  No worries, I'll just beat the devil out of it with a meat tenderizer!!
In the meantime, all that shopping for meat landed me right at Carl's Jr for another Chicken Wars taste test.  They have jumped on the bandwagon with a different animal ... the chicken and waffle sandwich.  Who could resist THAT?  Certainly not me!
So here it is ..... looks pretty yummy, right??  I couldn't wait to dive in.  I could smell that delicious syrup causing my mouth to water.
First off, the waffle is flat on the bottom, with only ridges on the top side.  That means it's not the least bit crunchy.  I was only half way through when I realized the syrup was a cursory quick dip on one edge only.  I searched the bag for a little container ... maybe they forgot to put it in?  Nope ... no syrup.
Had an elusive cup of sugar been available, I would eat this every single meal of every single day.  It definitely passed the taste test for me, but then I'm a sugarholic. 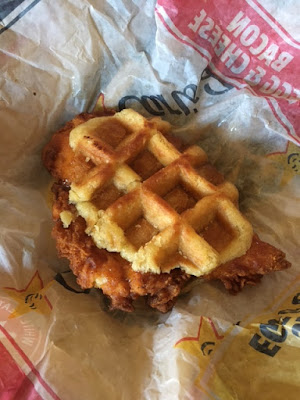 The chicken was good, although saying it was breaded is a stretch.   There's just a tad bit of flour covering the outside with absolutely NO crunch.  No matter, I licked what little sticky syrup there was off my fingers with relish.  Pretty tasty. 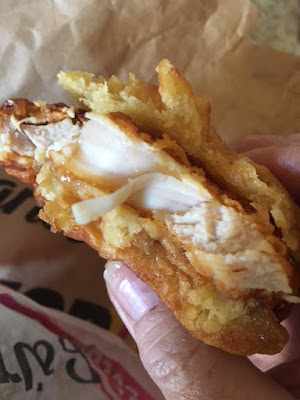 At the same time as the waffle chicken, they are advertising a hand breaded chicken sandwich.  Might as well try BOTH since I'm already there in the 1,000 calorie range.  This one left a LOT to be desired.  The bun is way too big and way too soft.  Think gluey.
As you can see, the "crispy" breading just isn't.  They did however get the mayo and pickles right. 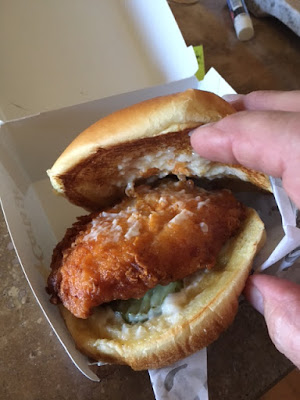 Possibly if the piece of chicken was as large as the bun.     Nope ... this was a NO for me.  If you want crispy hand breaded chicken, go to Popeyes or KFC.  This is down the list maybe in the number 6 spot. 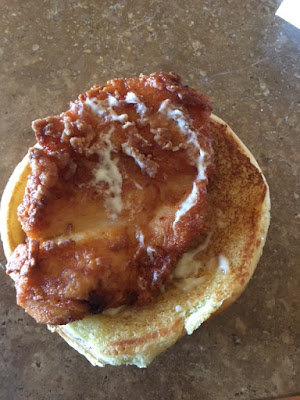 And there you have it, another Chicken Wars sandwich in the bag.  Or not, because I would only buy the chicken and waffle ... again and again.
To top off that fabulous meal I just ate (actually I only ate the chicken on the second sandwich), they asked if I wanted cake.  That's a silly question ... of COURSE I want cake!!  Now THIS I could eat every meal also!!  I ate half of it for dinner since I was still so full of chicken sandwiches. 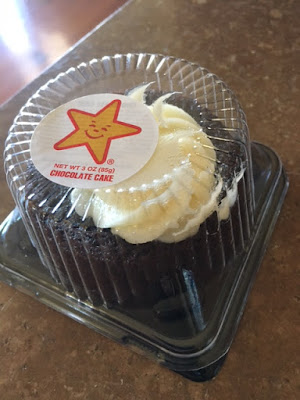 It's Memorial Day Weekend ... time for some rest and relaxation, not that that is any different from any other day around here.  I'm becoming pretty good at couch exercising.

My next food adventure comes from freezer meals.  It sure would be easier if I didn't have to actually think much about what to eat for dinner.  This may just be the answer I'm looking for and it's MUCH less expensive.