It's a Real Mish-Mash Today

I'm heading back in this blog to the trip Cyndae and I took before I got waylaid with the latest skunk adventure.  I needed, or rather wanted, a vest to wear with my tuxedo when it was required.  It's hot enough just wearing the tux in the house, but when you have to go to the Lodge where it's 90 degrees upstairs, coats just don't work well.  What can I say, it's a 100 year old magnificent building with very small air conditioners.

Since I had already begun the adventure at Men's Wearhouse, that's where we went, on a Friday.  Not a great idea when EVERYONE is picking up their wedding tuxedos.  Getting someone to wait on us was like catching that skunk.  Patience is a virtue.

It was all good until Cyndae tried to get me to go into the men's dressing room to try one on.  Uh Cyndae ... this is a MAN'S store ... you can't just walk into the dressing room.  So here it is ... we actually found one that fit and has nice details you can't see in the picture.  I pretty much feel like a waiter at a fancy restaurant. 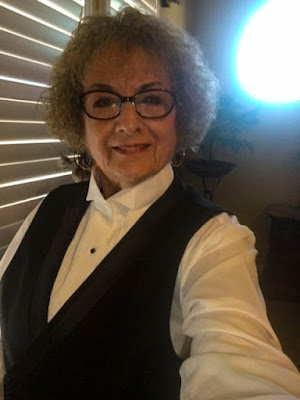 Speaking of which, once the transaction was complete, we walked across to BJ's Restaurant and Brew House.  It looked deserted.  After a walk almost around the entire building, we found a door.  Nothing indicated this was the entrance, or that they were even open, so we barged right in.

Sure enough, they were seating two people.  Since neither Cyndae nor I can eat an entire meal, we split a barbecued brisket burger with sweet potato fries.  The portions were HUGE!!  Mighty tasty, but I couldn't even eat half the fries, let alone half the burger. 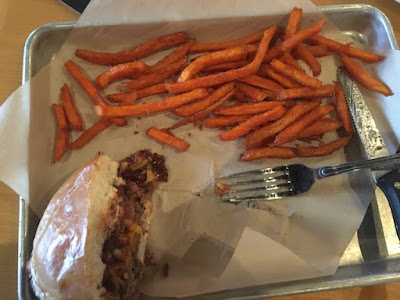 That of course gave us the strength to stop in at the nursery on the way home.  One long flowerbed by my garage needed something sturdy and colorful.  Lantana it is!! 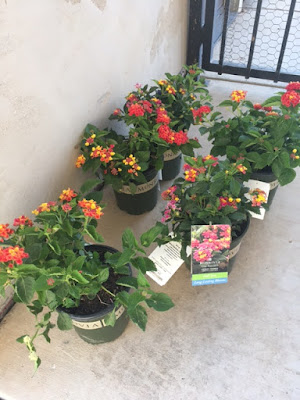 Aren't these gorgeous?  I picked up the pot and saw the $30 price and said no.  Cyndae scrounged around and found a line of them for $18.  SOLD!!  Here's the first one I actually got planted.  I'm crossing my fingers they survive. 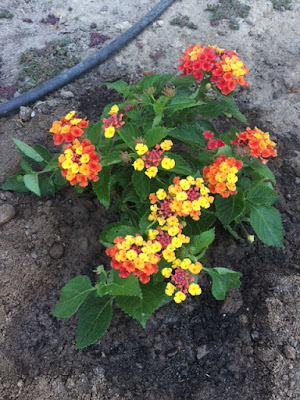 While planting, I heard someone singing their heart out.  It's a rather blurry picture ... I grabbed my camera with the long lens that I can barely hold steady and ran outside to catch these two. 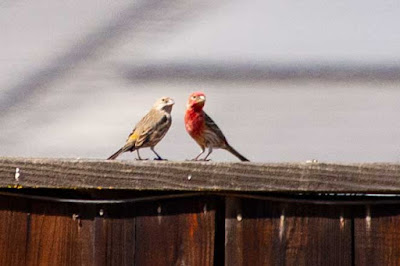 I have no idea what kind of bird they are, but he sang so pretty she gave him a little kiss.  Awwwwwww. 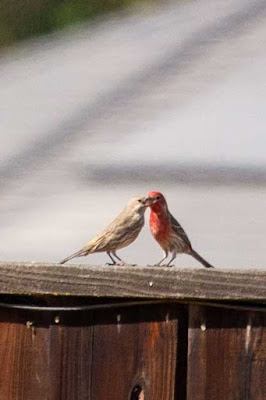 The rest of the day was filled with more fifth wheel prep.  SO many open spaces around the outside that yellow jackets can get in to.  I had that happen on my other rig.  Luckily someone spotted it before I turned on my hot water heater and burned myself up.
This is the back of the fridge.  Seems to me they would install a screen of some kind, but no, it's wide open to community wasp housing.  Thus you buy the screens and install them yourself. 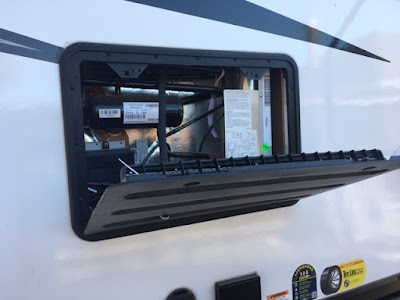 So there I was, on tippy toe trying to see what the heck I was doing.  They don't give you enough zip ties and of course I put the first one on backwards.  After several attempts I finally got one hooked.  Only five more to go, all of which will require a ladder!!  Of course that means a trip to Harbor Freight to get more since I broke one. 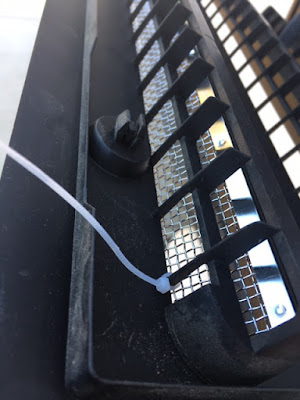 I know you are wondering WHAT, if anything, was in the skunk trap yesterday.  Surprisingly, the door was slammed shut.  Wait til you see ..... who knew there were so many critters tromping around at night.  I mean really, I DO live in a subdivision, albeit a small one.  I'll post the video tomorrow.

Posted by Nancy Kissack at 5:59 AM