From Making Jerky To Fireball

It's been interesting, the last few days.  In between skunks, tuxedo pictures, garage cleaning and playing great white hunter on the property, I decided to smoke a chicken.  My thoughts went something like this:

I love smoked chicken breast.  I think I'll smoke a chicken.  Why smoke an ENTIRE chicken when you could do just the breast meat because it's the best?  It's on sale for $1.99 a pound.  Let's DO IT!!

Back in the days of cattle wrangling on the slopes of Sequoia National Park, we didn't carry much fresh meat.  Everything was dried or canned.  There wasn't any way we could get ice chests packed on the mules to keep things fresh.  Canned dried chipped beef was the usual meat of choice.

That was unless "Jack" decided to act up.  He was our pack mule for the food.  He was so cantankerous that he wasn't led with a rope ... Dad just let him roam loose.  He followed because he didn't want to be left alone.

Pluggy he was ... never wanting to keep up.  Once out of site, we would ride our horses off the trail and hide behind a big tree, then wait for him.  Pretty soon he would come running, head up, braying the entire way, scared that he lost sight of us!  Silly goose!!

There were some sections he had to be led through, which ended up in disaster as he would smash into a tree here and there, creaking the bottles of beef (back then it came in thick glass bottles).  Eggs were always packed in plastic bags to salvage for scrambling because they rarely made it whole.

At any rate, one time we actually had real meat.  Instead of cooking it, Dad decided to make his usual beef jerky so it would last longer.  Our only refrigeration was the cold water in the creek, easily accessible by bears.  He cut the beef into strips and hung it on the barbed wire fence to dry, hoping the bears didn't catch a whiff!!  He smothered it in cayenne and black pepper to mask the smell. 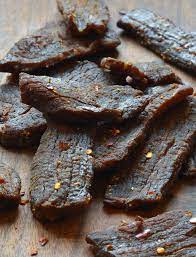 Lucky for us, it survived the bears, but not the meat bees.  The next morning it was completely covered with the flying crawling critters.  We salvaged what we could and made cowboy gravy for the biscuits.  The pieces were much thinner than in the picture above.  You haven't eaten gourmet campfire until you've had dried beef gravy over hard tack biscuits.

Little did I know when I started out with the chicken, I would end up with the same product.  Here's the thing ... you really need SKIN ON chicken.  After the first four hours, I stuck a thermometer in to check the temperature.   STILL not up to 165.  What the heck?

Sadly, I let it go another hour before finally taking it out.  I'm pretty sure this is the best chicken jerky I've ever made.  There's not one teeny tiny molecule of moisture left.  Oh it looks pretty, but is dry as a bone. My Dad would be proud if I was making jerky!!  I wasn't!! 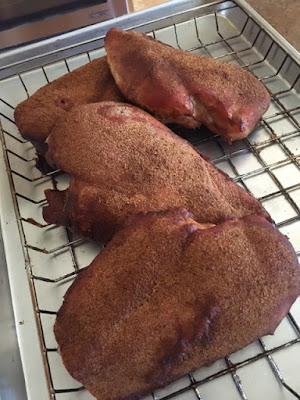 An update on the fence!!  Woohoo!!  I haven't seen anyone working out there for the last week at least.  All of a sudden yesterday I noticed the hole wasn't quite as wide.  I would think I would have heard the hum of a drill bit or hammering of the nails.  Nothing.  I'll take a close up look today and see how it's going.  Hopefully this will stop the long parade of critters marking MY territory as THEIRS. 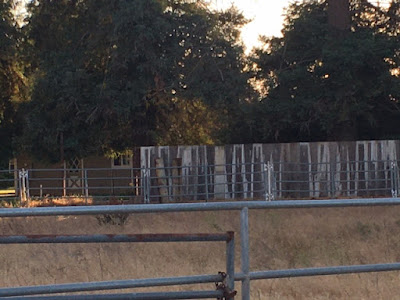 The photo shoot at the Elks Lodge went fine and I will report on it tomorrow.  In the meantime, meet Frank Paredes, a Veteran who survived Pearl Harbor.  He's 100 years old (almost 101) and going strong.  He only acquired the walker last year due to a fall.
Frank's favorite food is Fireball.  He's an Apache Indian who as a kid, cared for the horses of the cavalry at Fort Huachuca in Arizona, south of my place.  He still participates in our Lodge Honor Guard at every funeral they attend.  He's pretty much a legend around here.

Happily there were no critters on the game camera yesterday.  Almost a letdown.  I'm happy to report however that my skunk catching skills are the talk of the town.  I got two calls yesterday to remove FOUR skunks.  I'm not sure that's my new calling .... maybe I'll just show them how and they can take it from there!!  There's no use pushing my luck!!