You knew it was coming.  The Big Talk about everything water heater.  Previous big talks in my life usually centered around what was expected of you on the ranch.  Things like if you fall off your horse, you better figure out how to get back on, because if the cattle get away, you will be in BIG TROUBLE!!  I may have told you this story before.

I learned to shinny up that horse's leg like a pro and plop myself back in the saddle.  There was once however ......... my favorite horse Polly was getting on in years.  Even so, she was still fast as lightning.  We took off after a couple of calves trying to flee the field, when she stepped in a hole and went down to the ground.  I remember every second of that fall.  (My first horse here, I was maybe three?) 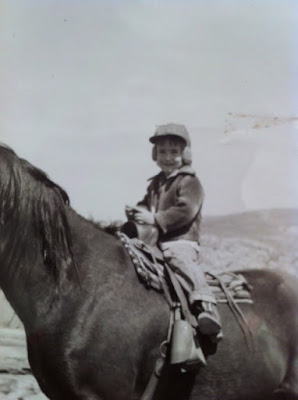 She landed on my left leg and I couldn't get out from under her.  She was able to stand just as my Dad rode up.  I of course was covered in tears, thinking I had just died.  "Get back on that horse, the cattle are getting away" as he threw me up in the saddle and off we loped at a slightly slower pace.  There was no kid coddling in the old days.  I figured I was lucky to be alive.

So when it came time for the Big Talk about the HOT WATER HEATER, I was ready Freddy with paper and pencil.  Then I called Bill Richards since he works for a company that sells these trailers.   I have to be honest, Bill and Patsy Richards have the coolest accents ... I just LOVE talking to them!!  So they won the calling lottery this time.

Of course while on the phone, I really needed to be in front of the heater.  Remember that lovely screen I put on to keep wasps out?  Funny ... with the screen on, you can't open the door.  I finally gave it a good yank, which caused the tiny spring to catch in my pinkie cuticle, ripping it wide open from end to end.  As the blood dripped to the ground, Bill began the talk.

Apparently I have a Dometic brand.  I'm hoping the water heaters are better than their refrigerators used to be.  There is no outside ON switch, only the one INSIDE the rig.  I've read so many postings on Facebook about the horrors of hot water heaters, but Bill said (in his best Canadian accent) not to pay any attention to those.  This picture is not my heater.
At any rate, I now have a better idea of how it works and how to make sure it has water in it before hitting the ON button.  I'm feeling much better about the entire process.  You see in my OTHER rig, I had on-demand hot water.  No water heater to deal with at all, meaning this is all new to me!!  I just don't want it to explode!! 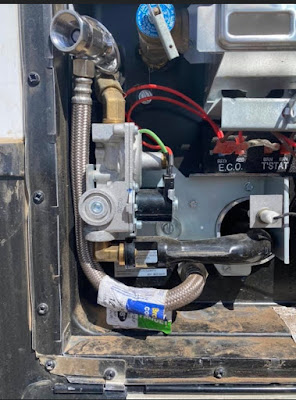 I got to speak with Patsy for a bit too.  I could listen to those accents all day long.  Why is that?  I even loved having to call Tiffin back East because their techs all had wonderful accents!!
By the way, HAPPY ANNIVERSARY to Bill and Patsy!!  May you have many more while riding your new motorcycle!!!
That afternoon, I was happy to see a box at the door.  finally, my extra valve had arrived.  To be honest, I had no clue how to put it on.  I thought maybe it would have to be returned since I couldn't figure out which side to hook up.
This is the exact reason I ordered it.  See that water on the ground?  The valves leak, apparently a problem on practically every single trailer they make.  When you open the cap, you get sprayed with lovely sewer water.  Luckily in my case, it's just PLAIN water.  I finally got the valve on and replaced the cap.  Now when I open it, THIS valve will keep the water at bay until I hook up the sewer hose.   Yes I will have two valves to open, but it's a small price to pay for staying clean. 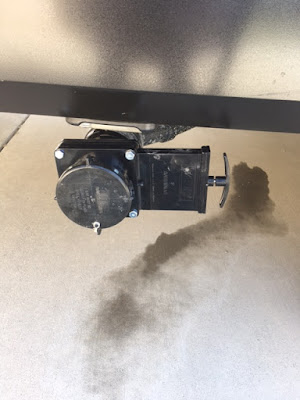 Hopefully there won't be any more big talks for awhile.  I'm still picking up stuff here and there for the trailer, like insulated covers to put in the overhead vents to keep out the heat, along with insulated window coverings.  There are so many huge windows, it's bound to get hot inside.  Outside window shades are also on my list, but that will have to wait until I get to the Indio rally.
In the meantime, I caught something HUGE on the critter cam.  I'll show you tomorrow!!