Mostly weirdness prevails around here.  I apparently pulled a muscle in my upper left back that runs down my entire left side rib cage.  To make it even MORE weird, the right side of my butt doesn't want me to sit down AT ALL!!  Unlike most people, it's the SECOND day that hurts the most for me.  Ummmm yeah, that's today!!

The good news is I didn't have to finish the "to-go" part of the fence because these posts are "okay for now".  I haven't seen or heard from the contractor since. 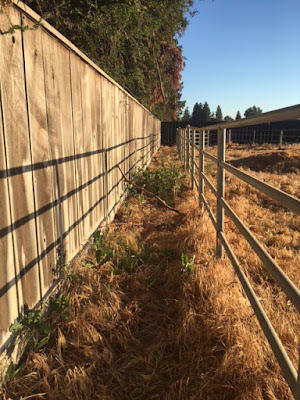 In an effort to repair the muscle damage, I actually had a breakfast of champions.  BROCCOLI!!  Yes, it's weird too, but that's what you do when you're single and really need to clean out the fridge before stuff spoils.  No it didn't help with the soreness OR the diet, but at least I wasn't throwing money away. 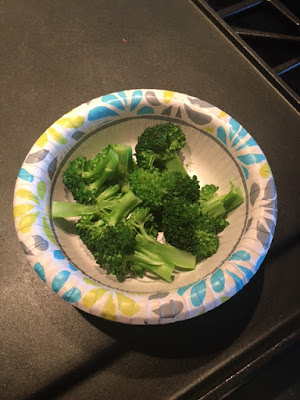 After breakfast, this is me hiding in the dark hallway.  The pups want to know what the heck gives!!  Well, the gardeners filled my bin so full that when the garbage truck came to dump it, nothing would come out of the bin.  Maybe it's the driver's fault for not shaking the can ..... I don't know.
I'm more of the opinion there is no WAY all that grass came from my lawn.  I think they are coming with a full bucket of green from someone else's lawn and dumping it in my bin.  I've tried to explain to them not to do that, but they don't speak English.
Now I've taken to hiding the bin in the garage, with ME hiding in the hallway when they ring the doorbell, looking for the bin!!  Not only weird, but ridiculous.  HOWEVER, with no bin they have to haul it off to someone ELSE'S house to dump. 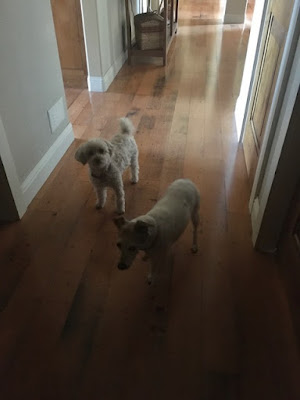 Here's another weird one ... you don't get far in our neighborhood without your picture being taken.  As I was leaving with the puppies to the Vet's office, he stopped in front of a driveway.  That's weird.  I took his picture.  He then pulled around my neighbor's driveway and parked here.  I took another picture.  We don't seem to have any trouble on our street, but the neighborhood has been hit lately by bums stealing trucks and tools.
I didn't confront him because I was late, but my other neighbor did after I called her.  He said he was there to pay the rent.  We now have closeups of his license plate.  You don't want to mess around with the ladies on this street!!! 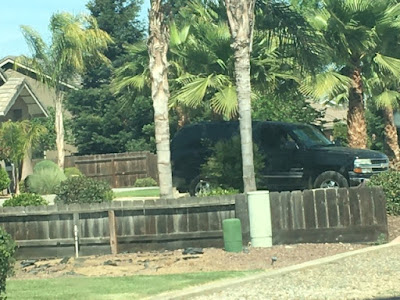 So here we are at the Vet's office, waiting for Miss Jessie to get x-rays.  Poor babies get totally stressed out.  Cooper is fine and got his Parvo shot, but needs his teeth cleaned to the tune of $800.  I'm mulling that over.  I think it's pretty ridiculous how much they charge.
As you can imagine, x-rays weren't cheap either, especially since Miss Jessie wasn't having any of it.  They had to sedate her.  She's like her grumpy old Mom when it comes to stuff like that.  Sadly, it's not looking good for Miss Jessie.  The Vet didn't even give her any shots.  My old girl has a shadowy lung, bad arthritis, and cancer growths that refuse to be stopped. 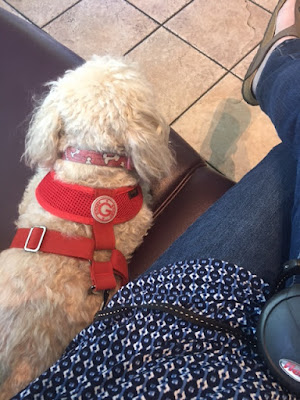 All that stress made for lots of sleeping all afternoon. 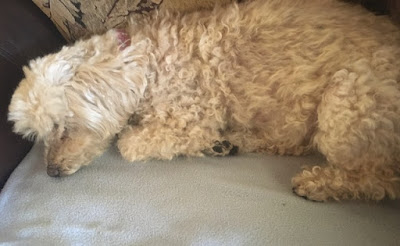 So we snuggled up on the couch, 16 year old Miss Jessie and 11 year old Mr. Cooper.  My my how time flies!! 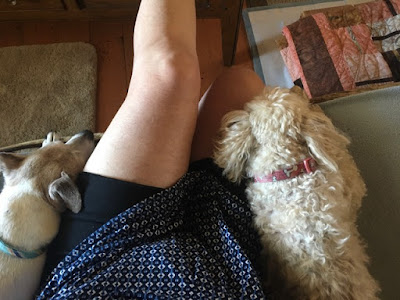 Amazingly, there have been no interlopers through the open back fence.  I'm thinking that last bad skunk smell was the end of the line for those little trespassers.  Not that another family won't appear out of the dark.  I'm still scanning the yard with my trusty flashlight.  Weird how sometimes it shines right into my neighbor's windows at 4:30 in the morning.  You know, just checking for skunks!!