Remember And Honor The Fallen

It's Memorial Day, a day to remember all those who have fallen fighting for our freedom.  A moment of silence. 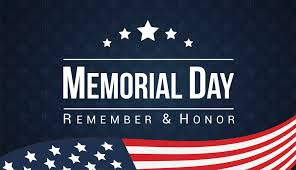 We can be ever so thankful that we haven't been in any wars the likes of World War I or II, or Korea or Vietnam.  Sadly, we are no longer the strong nation we used to be and so I pray we don't go there again. 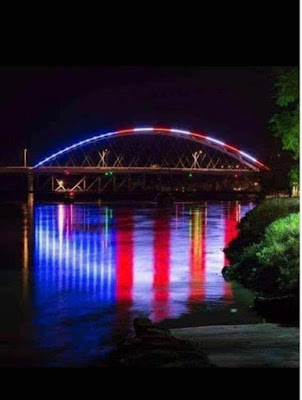 At any rate, those were my thoughts as I stared up into the sky yesterday while working on a little tan for the first time in years.  It's a good thing there were no drones flying overhead because they would have been shot down.
Squeezing into a five year old bathing suit is not a pretty picture.  At least those two helicopters that went by were too high to see anything.  Luckily I remembered the lounge chair was across the back forty up against the fence to keep the skunks at bay.  I drug it back to the grassy lawn and spent 30 minutes removing all the foxtails from my shoes. 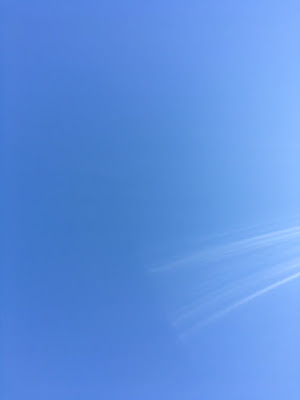 It's looks pretty awful, having laid on the ground for over a year.  This has to be the most sturdy, indestructible supposed-to-be-white plastic webbing on the planet.  It may have discolored, but it's as strong as ever, as evidenced by the fact that I did not fall through when I sat down.  I also covered it with a nice towel.
Of course being outside means play time for Cooper.  I hadn't been sitting one minute when he began barking.  The game is to roll the ball underneath the lounger so I have to twist and contort to reach it.  Then of course I have to throw the ball as far as possible, trying to wear him out running after it.  It never works.
If I try to ignore him, he barks, then does this ... sets it on the webbing and dares me to try and steal it.  What a card this kid is. 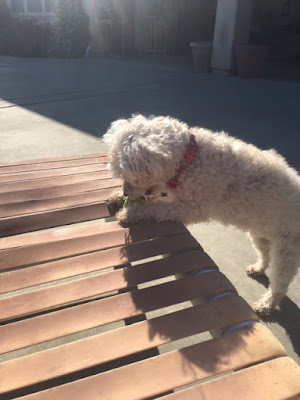 I actually spent the greater part of the day making this beautiful cherry crisp.  It's so easy ... just open a can of cherry pie filling.  On THIS occasion however, I made it ridiculously hard by deciding to use up all those cherries my neighbor gave me, rather than throw them away.
Have you ever pitted cherries?  My first thought was to make a beeline for the big box of antiques in the garage.  Way back ... and I mean WAY BACK, Miss Patty and I used to collect such utensils to adorn the walls of our kitchens.  We had everything red and green, which was the colors of the wooden tools we coveted.  There was everything EXCEPT a cherry pitter.
And so I used my handy dandy knife to cut each and every one apart and dig the pit out with my fingernails.  Five cups of cut up cherries later, as you can imagine, I was a lovely shade of red. 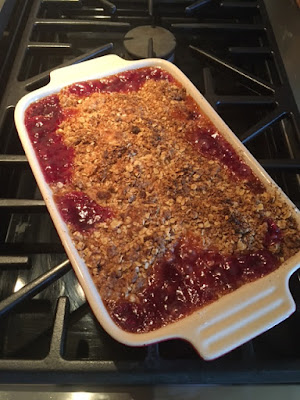 It was worth every single second.  Of course I put way too much topping on it, but who doesn't like oats, brown sugar and butter?  I served it up in my best china!!  It's my red, white and blue tip of the hat on Memorial Day. 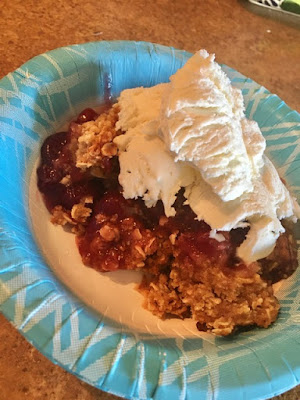 I missed one picture of the dinner prep yesterday.  This is the chicken chili.  I'll add a couple cups of water to the batch before cooking (it already has chicken bouillon in the mix).  Just to be sure I remember, I wrote the directions on each bag.  By the way, if in a hurry, these can all be cooked in an instant pot. 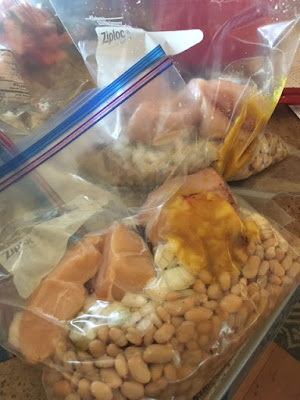 And so another skunk-free day goes by as I hit up Michaels and Joanns for my latest try to staunch the boredom.  CRAFTS!!  Not that I'm very crafty, but it's more fun (and less dangerous) than moving skunks!!

Posted by Nancy Kissack at 6:26 AM