First things first!!  Here's my latest catch, although you really can't see much.  The hole in back is small for a big reason.  If that's a skunk in there, I don't want any perfume escaping my direction if he happens to be looking the other way and gets scared.   I very carefully pulled the tarp back.  This is grey Kitty Kitty #3.

Pretty hard to see, I know.  It's very dark in there for a reason and kitties know EXACTLY what door they came in.  They wait with their noses up against the gate.  Once opened, they take off like a shot from a pumpkin chucker.  This one actually turned around and smiled for the camera.  At least the poor baby got a good meal of tuna, eggs and cat food before screaming off into the night once I lifted the gate. 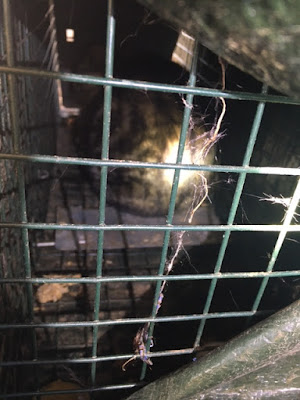 Company arrived mid afternoon.  This is Cyndae, my friend from the Sacramento area.  As you can see, Jessie is intent on what she is eating, which I think was ribs.  This picture came from our last visit.  We had shopping plans today, but I'm pretty tired from a late night meeting.
Cindy, who used to live here, adopted Cooper's twin brother once she met Cooper and saw how sweet he was.  Sadly, PoPo Gigio passed away not long ago. 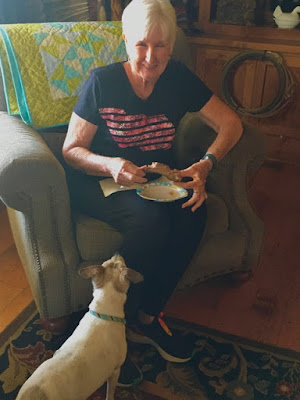 On the next front, those blood pressure pills seem to be causing lots of leg and foot cramps.  The answer of course is to drink lots of water.  I feel like I'm floating away.  My fairly expensive blood pressure machine (which should work, right?) doesn't seem to know what's happening.
First try it was 106 over 30-something.  I'm pretty sure that's dead, but I still seem to be moving.  I guess time will tell.
In other interesting RV news, I got a call from Lazydays, you know, one of those RV dealers that loves you until you drive out the door, then they never want to see you again.  They said my parts came in and they wanted to schedule an appointment.
Really?  What parts?  Well, the parts you ordered for your RV.  I didn't order ANY parts, but I didn't tell him that.  I asked for a list of what had come in to be sure they had everything ... snicker snicker.  He didn't know, but promised to call me back.
Sure enough, my LED lights and battery came in.  Oh good I replied ... except I actually DID get the battery, or at least I THINK I did ... maybe I better go check to be sure there ARE two like I asked for.  At least I know the BOX is there, I've just never taken the top off.
Okay then ... let's make that appointment ... and we did ... for July 20th.  That's how far out they are with repair appointments.  In the meantime, I'll write down everything I can think of and call ahead to be sure they have parts available.  Maybe I'll get lucky, have nothing to repair and cancel the appointment!!
I'm pretty sure they have me mixed up with someone else's rig, but you never know.  Maybe they forgot to tell me something when I picked it up!!

The Knight news happened out of blue last night after a phone call from Prince Charming.  I had no intention of going to any meeting, but the you-know-what was apparently about to hit the fan.  It has happened in every club I have ever belonged to.  Those developments will appear on the blog tomorrow, because right now I need a second cup of coffee.  I was awake most of the night!!

Posted by Nancy Kissack at 5:58 AM