Be Still My Beating Heart

You know that adrenalin rush you get when something scares you, like maybe that first step out of the airplane skydiving or that first step off the zip line platform?   That's what I get every time I go outside and check the trap.

My heart beats faster and I get that "feeling" in my chest.  Not a heart attack exactly, but close!! 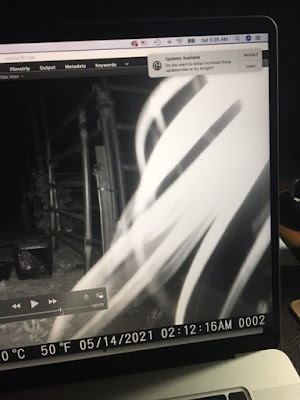 In spite of my desire to capture the above, which really did turn out to be Mr. Skunk up close and personal in front of the wide angle camera, I would much rather catch THIS kind of kitty.  He was sound asleep at the plant nursery we visited. 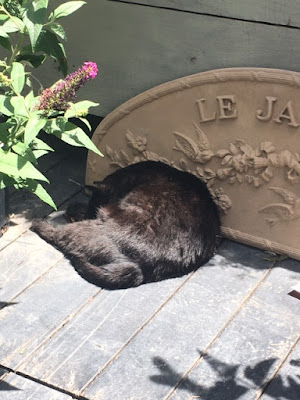 As I walked closer and closer, I heard the telltale scratching and digging.  HALLELUJAH!!!  That free buffet worked because guess who came back for seconds.  The adrenaline began to flow because NOW I have to transport Mr. Trespasser in my truck.
As I got close to the cage, he stamped his feet loudly.  He was MAD as a wet hen!!  I left him be until daylight.  By then he was even madder, if that's possible.  Maybe he was just scared.  He had dug a hole 10" across and 4" deep at the end of the cage THROUGH the wire.  Basically, he destroyed my best Christmas wrapping - duct tape skills - around the trap.  I'm no dummy, I completely covered the cage with a big tarp so if he DID spray, I wouldn't get hit.
Cyndae had an early appointment and I didn't want her to miss the adventure, so I covered the front with the usual black plastic bag and left him to veg out.  BIG mistake.  The sun came up, making him even madder than before.  He pulled half the bag INTO the cage.  THAT is a problem because it has to be removed in order to get the door open.
Ever so gently, I finally picked up the cage to move it to the shade.  Instantly he sprayed!!!  I mean it was like a garden hose hitting a plastic tarp!  IT WAS SO BAD!!!  Just as I set him down, he sprayed again!!  It's a good thing my Christmas wrapping skills are better than my cooking, because although it smelled pretty bad, NOTHING got on me.  I left him in the shade to cool off. 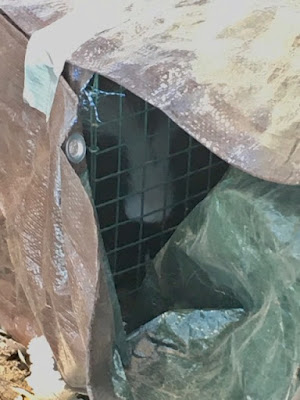 By now it was 11:00 and Cyndae wasn't back, so I decided to take him to the newest hotel on the block.  Ever so carefully and quietly, I picked up the cage.  Oh my gosh ... you cannot imagine just how heavy they are.  I pride myself on being pretty strong, but these guys are all muscle.  Must be all that food he ate the night before.
I very gingerly lifted him into the truck and wrapped him like a burrito with my old sleeping bag.  He did not go quietly.  He dug and dug some more.  Every time I heard him scratch, I shook the cage a little.  At long last Cyndae showed up and we jumped in for the ten minute trip. 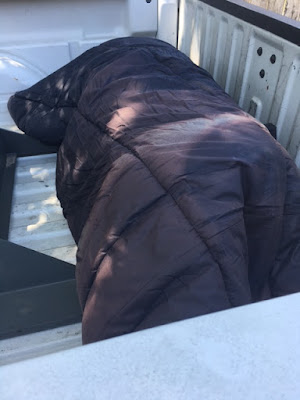 Oh so carefully we unloaded him.  Cyndae tried to dislodge the black plastic bag over the door while I held the cage.  Be still my heart .... it was beating like mad.  THIS is the scary part.  Unhooking the latch, reaching down and grabbing the door while pressing in the right place to allow it to open, then grab the latch, hook it and RUN FOR YOUR LIFE!!
Like the other two skunks, he didn't budge from the back of the trap.  He wanted nothing to do with the light at the end of the tunnel.
I breathed a big sigh of relief as we drove back home.  I'll pick up the trap today, hoping it's empty.  Boy do I ever pray that is the LAST of the mohicans and I don't have to go through this again.

Posted by Nancy Kissack at 5:44 AM