I really figured I would catch a lot more kitty kitties in my back yard with the skunk trap.  The favorite thing on a skunk's menu is cat food.  Many people around here feed the stray cats, thus the abundance of food favored by skunks.

I haven't seen this guy around in the daylight EVER.  He's the very first kitty I caught, whereupon he learned his lesson.  Never go near the trap!!  This is probably the fourth time I've seen him hanging around the area at night.  I do like these guys, since they are probably the reason I have no mice.  And I say that with a whisper so they too don't become another problem.

So one morning I go outside to find lots of bird you-know-what on the patio.  Where did THAT come from?  Of course I looked up to my roof, only to spot a big pile.  NOOOOOOO !!  Then I heard the telltale cooing which in English means I've got PIGEONS homesteading on my roof!! 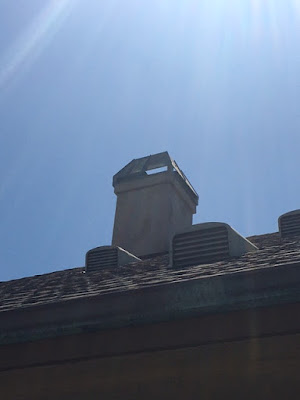 Good grief .... I've got enough vermin around here.  I really don't need pigeons setting up housekeeping.  This is a picture with NO birds.  Why?  Because I just threw ten tennis balls up on the roof to scare them off.

Do you know how hard it is to throw a tennis ball?  Especially UP and LONG?  I rather prided myself on my baseball skills in years past, but alas, they have all disappeared.  I barely got up to the first vent.  How embarrassing.  I'm sure they were laughing at me.

I finally got them to fly away, but then had to get out my tallest ladder and retrieve three balls from the gutter.  I went out several times a day for three days and scared them off.  A couple of times as soon as they saw me, they flew away.  Well that worked well ... I haven't seen them now in two days.   I mean really, WHAT will show up next????? 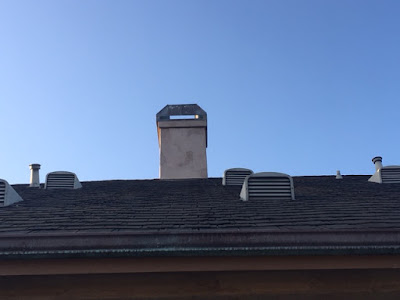 Here's some of those old images.  I didn't wear your everyday fashions, I wore vintage clothing.  Do you have any idea just how hard it is to NOT smile for the camera?  Most of the clothing came from various antique stores ... when there was such a thing ... and many of the items came from my grandmother and HER mother. 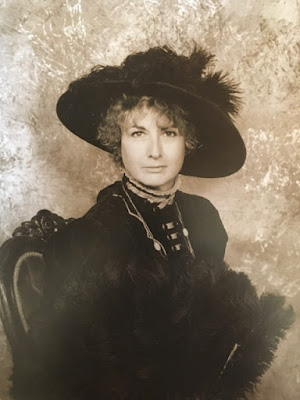 The hardest part was getting IN to these outfits.  Ladies of old were very tiny, unlike me.  Everything is authentic, including my all time favorite hat.  Those two black pieces sticking up are the dried wings of a crow.  I know, pretty disgusting, but VERY fashionable! 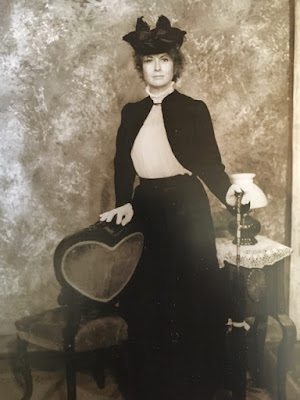 Just for kicks, we threw in the red tights with the button up boots.  It was a lot of fun.  Sometimes I even walked the streets of the gold mining towns in this area, dressed to the nines.  I would do it again except there's no way I could fit into those teeny tiny clothes now. 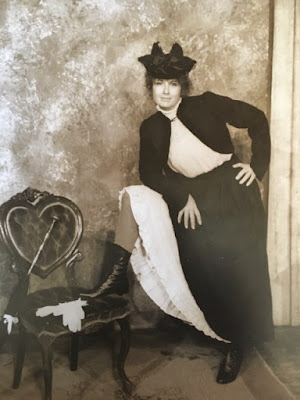 This dress was handmade by my grandmother when she was a teenage Southern Debutante.  It's made from maroon velvet with silk lining.  The hat, also velvet, is covered in ostrich feathers.  The big black fan I'm holding (barely visible) is also made of feathers.  I imagine she was the belle of the ball!  Too bad she fell in love with a Damn Yankee and her family disowned her. 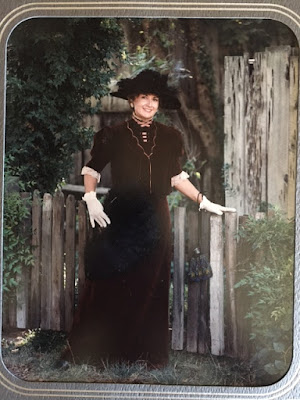 And so it's time for a little more modeling.  I found one of my photographer friends to take portraits of the Lodge Officers for this year, of which I am one.  It will be a LOT of fun working with Big Cris again.  I've told him to use the photoshop liquify button and take off 20 pounds, as well as make me look 10 years younger!!!  It's a win-win!!