Rattlesnakes and Bears OH MY!!

Here's something SO simple it makes me smile every time I pull in to my driveway.  Can you believe it?  My bottle brush tree has not only LIVED, but it's BLOOMING!!  It was the only one at the nursery and not in the best of shape.  I'm so excited it likes it's new home! 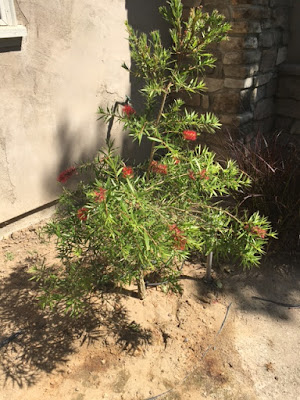 I was also very surprised as I wandered around in the dark looking for those elusive creatures of the night.  At least twice a day I have to be sure they are not lurking when I let the pups out.  Look what I found!  ANOTHER flowering plant.  Will wonders never cease.  Of course you really can't kill these geraniums, but they are a success story for me none the less. 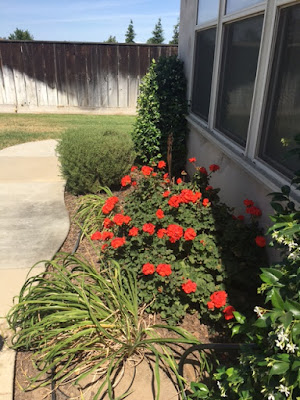 So here's a story completely off topic.  This is me with my Mom and Dad at our Cow Camp in Sequoia National Park.  I was probably a freshman in high school when this picture was taken.  Every year the cattle were driven up to this part of the country on our BLM lease.
They drove the cattle up the mountains on horseback from the high desert to feed on the grass.  Later in the year, the cattle were gathered back up and driven back down to the ranch.  This is a one room very small cabin with two beds made of rope, a small table and an old wood stove.
Food was kept in a steel box buried in the ground in front of us or hauled up and hung in a tree to keep it away from the bears.  We didn't sleep inside, but outside in sleeping bags laid out side by side on a big canvas tarp.  We basically slept in our clothes and occasionally took a spit bath in the creek below the cabin in 45 degree water.  Woohoo that was cold!!
The scary part was when I woke up one morning to huffing noises and later found bear tracks going right by our tarps.  For me, bears are the second scariest creature!!
What little food we had was carried in on pack mules.  The daily chore for us kids was to grab our fishing poles and catch dinner in the little creek.  We never failed.  It was fish or canned beef.  Fish won every time.
One day just for kicks, we went out on a hike.  That was rare since we always just rode the horses.  As I was stepping over a big log, my Dad yelled FREEZE.  And I did!  There was a huge rattlesnake right under my foot.  Since we always carried guns for safety, Dad shot the thing and I carried it on a stick all the way back to the cabin.  DINNER!!
On the way back, we walked by the big rock pile behind the cabin that was a rattlesnake den.  Now you know why they put the fear in me when it comes to snakes.  Sure enough there were a couple more hanging out. We snagged a second one for good measure.
You see right next to the rock pile was the outhouse.  No one, and I mean NO ONE was allowed to go near the outhouse at night because it was usually the hangout of one or two rattlers.  We are about 50 miles from civilization, so there was no doubt if you got bit, you would probably die. 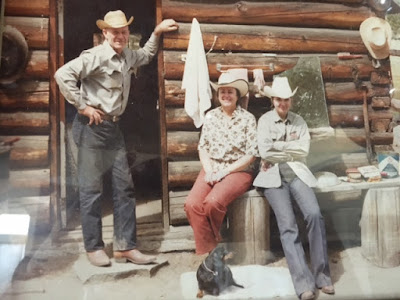 Those two turned out to be lunch.  Mom soaked them overnight in powdered milk and water before frying them up on the fire.  Mighty tasty those snakes!!  The wood stove inside?  That was just for heat.  We had a huge fire pit outside for cooking.
Since there was no running water, my first job every morning was to take the bucket down the hill to the creek, fill it up and trudge back up the hill.  Oh the complaining that came out of my mouth.  I'm sitting on the wash station and of course there's our old broken mirror to be sure your hat was on straight.  You can probably tell I never gave up my Levis and boots.
The little black blob is my dachshund Maggie.  I truly don't know how she survived that trip.
I have fond memories of my brother's broken arm and our attempt to airlift him out that failed.  But that's a story for another day.