A Day In The Blue Condo

It was just your ordinary day.  Up at 4:22 I caught a glimpse of the skunk trap under my morning flashlight as I cruised through the back yard.  It's not good when the very first thing you do when you open your back door is take a really big sniff of air to see who might be wandering the byways, followed by a searchlight scanning the perimeter.  I feel like I'm in a spy movie.

Uh oh ..... the trap was sprung and the door closed.  I listened intently, but didn't hear any scratching.  Probably another local kitty kitty of the sweet kind who couldn't resist the taste of tuna.  Yup ... definitely SOMETHING in the trap.

At first I thought maybe the fox, but surely he's too big!!  I finally got the tarp open enough to see the pink nose.  I KNOW WHAT THIS IS!!!  Mrs. (or Mr. as the case may be) OPOSSUM. 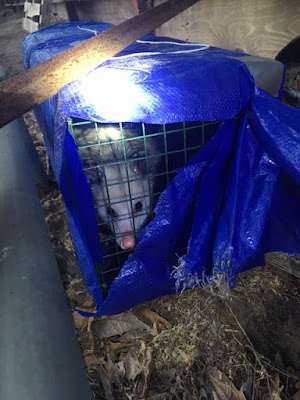 I grabbed the critter cam and took it inside, then quickly found my gloves and went back out for the release.  These are the GOOD guys!  They eat black widow spiders, potato bugs and every other creepy crawly thing they can find.
And they are SOFT!  How do I know that?  Because at the little zoo in Oregon, they have rescued a few babies, one of which I got to hold.  They cling to you like crazy and snuggle up like your favorite teddy bear.  I have to admit this baby is HUGE!  We apparently grow them big around here!!
I gingerly released the latch and reached down for the door, all from the back end of the trap.  Nancy is no dummy.  I do not want to get run over or bitten in the rush to escape.  Not a peep came from inside.  Nothing happened.  He didn't move.
Okay ... it's another night creature that doesn't like the sunlight.  I figured I would just leave it alone.  It would spend the day in the free blue condo and leave after dark. 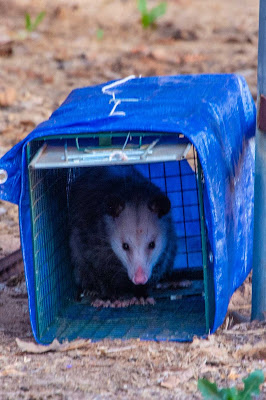 Look at that sweet face and those little feeties!!!  How could you not love these guys??  You do have to be somewhat careful however.  They have long sharp teeth that can give you a nasty bite.  No worries about rabies or diseases ... they are immune!
I figured it would not leave for hours, but alas, I was fooled.  I went back out 30 minutes later to check and it was gone in the bright light of day.  I rather imagine it's holding up somewhere near waiting for darkness. 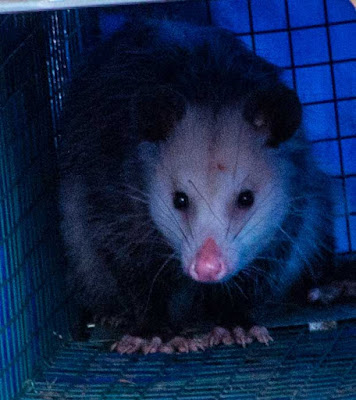 Hmmmm ... I wonder who else around here might be visiting the blue condo for a night's stay?  I seem to have quite the cast of critters in my back yard.
In other fascinating news, I went to Harbor Freight to purchase more zip ties for the screens covering the back of the fridge on my fifth wheel.  I'm pretty sure I got 189 for $1.89.  I also picked up a beautiful bright red cart on which to drop my hitch.  Of course it's made in China, with the crappy workmanship you would expect.  But that's a story for tomorrow!

Posted by Nancy Kissack at 5:40 AM