I was born and raised in the boon tullies ... that means no neighbors in sight.  Even after eminent domain and we were forced to move the ranch to Central California, there was only one neighbor a quarter mile away.  Having neighbors has always been hard for me.  Mostly because they aren't respective of THEIR neighbors.

Case in point ... my neighbor here in Seaside Oregon has moved his satellite dish three times, from next to his rig, to his picnic table, to 6" from the drivers side of my rig.  I'm sorry if he parked under a big tree.  Parked isn't exactly what he did, since he didn't really know HOW to back up a trailer.  He blocked the road for over an hour, wiping out one tree, before he parked directly under and up against another.

At any rate, apparently it wasn't working, because next thing I know he's got a Dish Network truck parked in MY parking space.  I asked them to move, unloaded the Jeep and went inside.  That's funny ... I hear people talking VERY close to the back of my rig.  I step outside for a look.  WHAT?????

Yup ... this is what I found on my passenger side.  They set up his dish at the back corner of my rig with the cable going UNDER my rig.  Really?  Don't you think you might ASK FIRST?  It's so close I can't walk between it and the back of my coach.  I suppose it's not as bad as the lady in Long Beach who carries around rocks and a ton of oyster shells, so she can carefully mark out her entire site all around (plus a few inches for good measure), install three easy ups, a stone patio, two chairs with end tables and a waterfall feature, not to mention the eighteen sets of wind chimes hanging from the easy ups.

The poor neighbors on either side have to listen to all that noise and be squished into their sites.  For those that remember, it's the same lady who was the nuisance at Whalers Rest in Newport who was finally kicked out.

So what do you do with these people?  Complaining around here does nothing.  I found out that the horrible Manager from Long Beach that I thought got FIRED, is now the Manager here in Seaside.  Put on your patience pants Nancy.  Just close the blinds and don't look!! 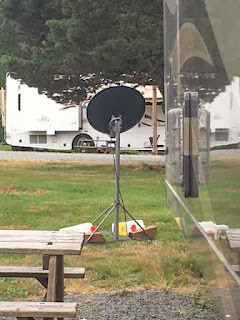 Being locked up in the rig is a double edged sword.  Even though I'm not all that good at it, I LOVE to cook ... to try out new things.  Trouble is, I then gain weight just looking at it.  Here's the hand pie I had at the Astoria Sunday Market.  I decided to try and replicate it. 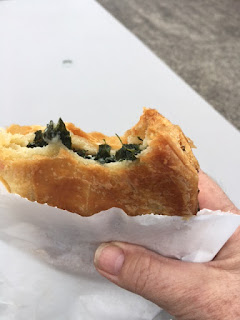 It looked pretty simple ... it's just puff pastry with filling.  I thought it was like spinach dip.  That's easy enough to make.  Not really sure just how BIG to make them, I cut the pastry in half.  Maybe I should have cut it into fours.  I plopped a big spoonful of spinach dip in the middle, brushed water around the edges and sealed it with a fork.  Wow ... they look pretty good!! 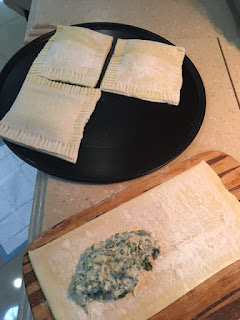 I had no idea how long to bake them, only that the vendors said I could buy some ($7 each) frozen and bake them at 400 degrees.  So that's what I set my Breville oven at.  When they were golden brown, I took them out.  Maybe I should have waited a little longer.  I let them cool for the taste test.

You might have noticed that hers had much more spinach.  Mine tasted pretty good, but when was the last time you ate an entire dish of spinach dip all by yourself?  That's how I felt after eating only half.  The crust was perfect ... the filling so rich with cream cheese and cream that my stomach instantly complained.  Oh my ... I wish I hadn't eaten that whole thing!!

I called Chef/Nurse Patty to discuss how to cut the cream and cure the stomach.  I'll give it a try maybe next year.  At least they didn't get buried, but then again they may remain in the freezer forever. 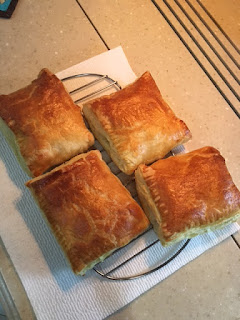 If you're looking for good fish and chips in Seaside, Bell Buoy Fish Market is a good place to check out.  One day on the way home I stopped in for a five piece $16.00 plate.  Their cole slaw is delicious with chunks of pineapple and their fish cooked to perfection.  Their waffle fries need work.   I would put this lunch third on the list of best places. 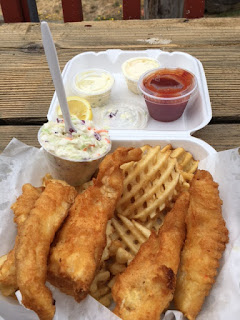 All the sitting inside at night has for some reason brought about a crafting bug in my brain.  After looking at my beautiful new basket, I figured to learn how to do it myself.  That's when I found out how many ways there are to make baskets.  This particular one suited me ... it's crocheted together.  I can crochet anything ... just don't ask me to knit!!  I'm over that now and on to monotype printing. 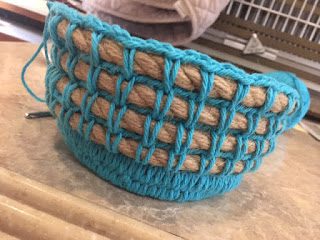 This was a cute crafty idea I saw at a local store.  They took out the cane bottom and added a flower box with bright paint.  Maybe I could grow cactus in one at the Lost Horse Ranch. 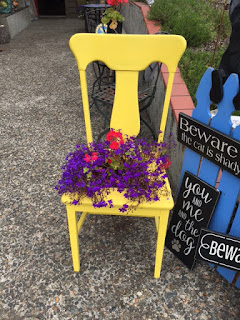 I did a little kite flying yesterday in what felt like 45 mph winds.  I tried for a picture of it in the sky, and promptly crashed it to the ground.  I'm happy to report no damage, but no SKY pictures will be shown.