I promise ... other than maybe one or two ... this is the end of the kite pictures.  I arrived early on Sunday morning to my appointed station to find the tide had come all the way up and deposited flotsam and jetsam in my tent.  I turned the table upright and grabbed a chair.  I had a long time to wait.

Seems everyone slept in today except me.  At 9:00 people started wandering by getting ready for the memorial fly.  If you haven't been to one, put it on your bucket list.  All the kites flown are white and it was amazing. 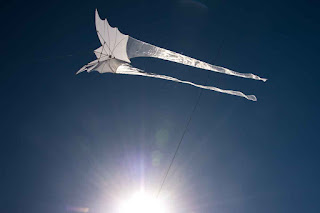 There were all shapes and sizes, including these two dove that flew side by side.  For the most part, this is a kite flyer affair, paying their respects to flyers who have passed in the last year. 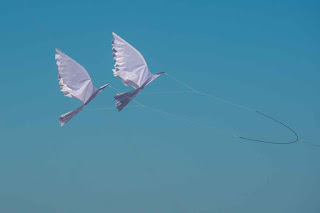 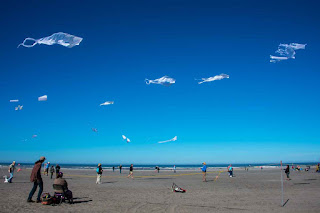 This kite is made especially for that purpose.  The names are printed on the sail and it is raised higher and higher until they let go and it disappears into the sky.  The thought is that when it comes back down, maybe someone will find it and become a kite flyer with their newly found kite. 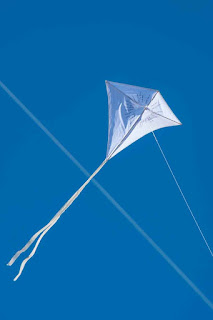 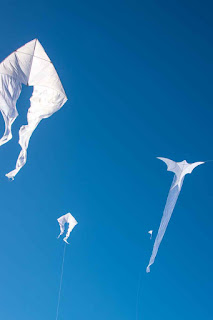 With the ceremonies complete and the cancellation of Revolution Kites Master Competition ... I've no idea why ... it was demo time.  Anyone wanting to give a demonstration of their skills to the crowd could fly to their music.  This is Cardin.  He was about 3 feet tall when I met him two years ago.  We were both beginning flyers taking lessons from John Barresi.  Too bad I didn't improve as much as this kid. 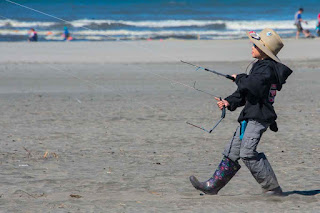 Since then, I've become good friends with his parents and brother Dylan, who flies just as well.  Mom makes them wear rubber boots so she doesn't have to deal with the sand!! 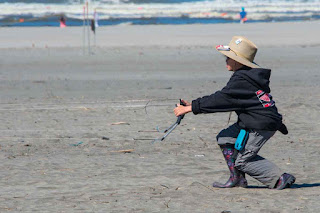 He's flying a Vicky.  Little fabric, lots of support ... sort of like Victoria's Secret, which is where it got it's name.  It lets all the wind go through the kite.  Otherwise, Cardin would be flying off like the Memorial Kite. 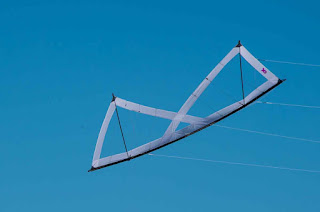 This is Spencer Watson.  He's up there with the John Barresi kind of flyers.  Yup ... that's the kite he's flying right in front of him, upside down and backwards.  Weird, right? 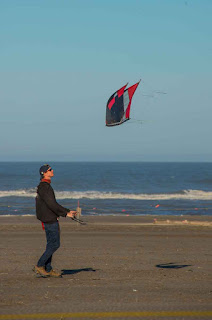 It's called a dog stake.  The four lines of his Revolution kite are run through this contraption and back to where he stands.  This makes every line work backwards.  I can hardly do stunts with my lines working the RIGHT way.  Doing everything backwards?  No way!! 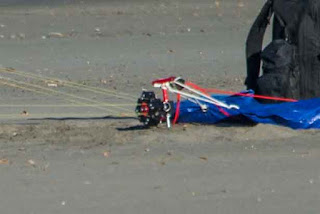 Kite people are amazingly friendly.  Just ask anyone how to do something and they will gladly show you.  I'm just too shy to ask.  When I saw him doing tricks like this before the show (and saw him walking my direction) I screwed up all my courage and asked if he could tell me how to make my kite rotate around the logo.  In other words, turn a perfect circle.  Little did I know who I was asking.

It's called a bicycle, since that's what your hands look like when you're flying.  He was so kind to take ten minutes and show me.  It was later I found out who he was.  Good grief ... couldn't I have picked on a lessor known celebrity???  He's one of the top Rev flyers in the world!!

His demonstration was amazing to say the least, and pretty crazy as the music and song (if you could call it that) was about walking in the forest and coming face to face with a killer, then fighting him off.  You'd just have to be there to appreciate what Spencer was able to do with that dog stake and his kite. 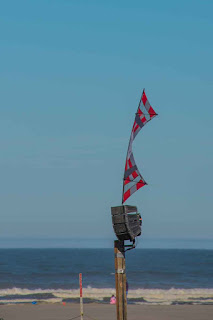 Next up were several groups.  I know Joanna will be familiar with these guys.  (I wish she had been here to tell me who Spencer was so I would have kept my mouth shut!!)  Katrina on the left is calling the "moves" they perform, along with Wayne, Chuck and Dylan, standing in for Mario who had to leave.  I mean really ... here's a ten year old flying with the pros!! 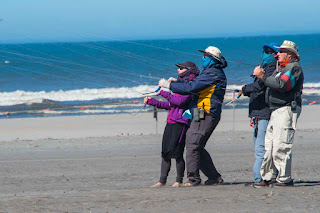 I'm thinking everyone got new kites this year.  You get to know who flies what, so even if you see them on the ground, you know who's kite it is.  Katrina's husband also flies big kites. 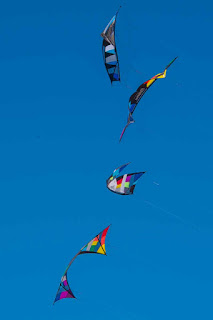 I couldn't pass up these ground stakes.  They are just too cute. 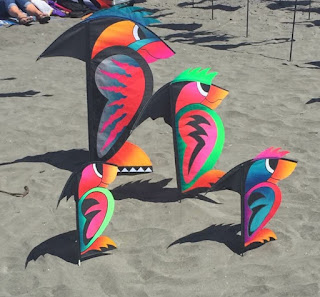 This one flew during the soft kite mass ascension.  The tail looks like a guy hanging on for dear life.

With the wind getting worse and worse ... probably up to 25 mph on Sunday ... I began to contemplate what was holding my tent down since the sides were moving furniture around inside.  Just the same, I held my post until noon.  Time to depart and get some flying in myself. 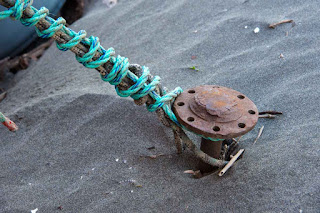 Or not ... since half a mile down the beach where I fly, there wasn't any wind at all by 2:00.  WHAT??That's crazy!!  So I hung out with the puppies in between getting ready to hit the road. 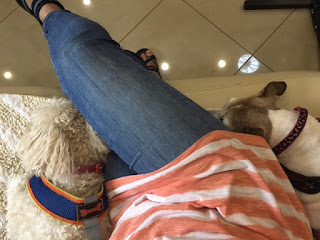 Surprise!!  I'm in Tillamook.  When I arrived, there was one space available.  I snatched it up.  I stepped outside and breathed in the fresh air.  Oh YEAH!!  This is Tillamook alright.  The lovely fresh scent of cow manure!!  It's a bad smell to some, but not to me.  I guess you have to have been raised on a ranch to appreciate it.

In the next hour, 14 rigs left.  I think they were trying to tell me something.  Before I could fix lunch, 15 more took their place.  They are building 15 new spaces here, 5 of which are now complete and can be used for those Elks who want to stay.  There's no grass, but everything else is up and running.

I'm only here for a couple of nights.  I've been trying to get new tires ordered, coordinating it with my stay in Florence and Newport.  So far that's not going so well.  I have no idea where I'll be, but I'll be somewhere.  Hopefully getting in a little more kite time.