Soaking Wet ... Not From Fog

Upon arriving at the Thousand Trails Campground in Seaview Washington, I was lucky to find a space right next to an OCCUPIED space.  In fact, there were TWO occupied spaces, as denoted by the big sign over the site designation.  That gave me lots of room for the puppies to roam, but it was too close to loud noisy neighbors for me.

I made quick friends with the rig directly behind me.  I coveted his spot, and him for that matter.  A nice friendly gentleman with a cowboy hat and three big dogs.  Since he was leaving the next day, he suggested I turn my rig around and just pull through as he pulled out.  Musial chairs basically ... and it worked beautifully. 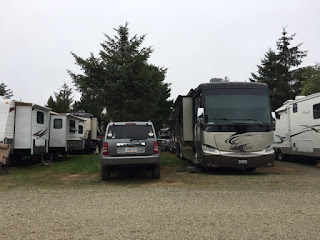 I'm now parked on the best side, with the best satellite signal and best view, at least until the tent campers arrive. 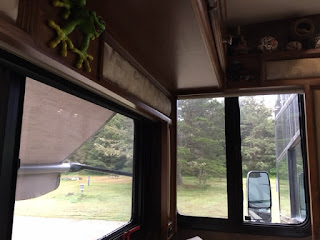 My first photographic exploration would be the North Head Lighthouse.  It was pretty foggy when I started out, but with all the tourists, the early bird catches the worm and the parking space.  I had seen a photo on Facebook from a location I knew was not publicly accessed, so of course that's the first place I headed.

Thinking I found it, I slogged through the wet bushes, stickers and berry vines galore, until I was getting damp around the edges.  With none of the flowers in sight, I snapped a couple of foggy pictures when all of a sudden ... WHAP ... I was hit with a wave of water.  YIKES!!  What the?????  I turned around to get whapped right in the face with another burst.  Well for heavens sake, there are sprinklers up here.  Okay ... I give.  I slogged my way out trying to shield the camera from even more water.

This is a beautiful lighthouse, but you probably don't want to visit until the reconstruction is complete in a year or so.  It's surrounded by scaffolding as they try to save the exterior from melting away due to water trapped INSIDE the walls. 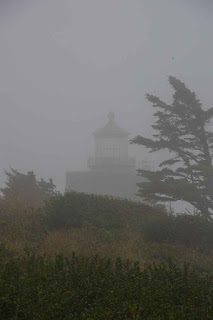 With the heater running full blast, I headed over to the second Lighthouse, Cape Disappointment.  Be sure and get the Discovery Pass for all parking in this area or you will receive a nice ticket for $99 ... and they give them out freely!!  Parked below the Lewis and Clark Interpretive Center, I hiked out the back of the parking lot and up this trail. 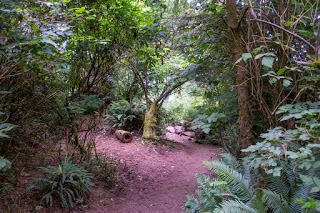 Yes it's steep in places, but you will be rewarded greatly for your one mile hike.  Along the way, you pass by the Coast Guard station peeking through the trees at low tide. 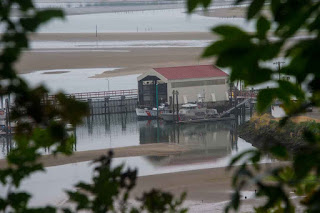 You'll miss this beautiful location if you aren't careful since someone took the sign down.  This is Pirates Cove.  It's just inside the North Jetty. 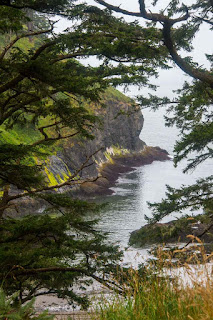 Be careful on the way down to the driftwood covered beach, as it's rather steep.  I can just imagine seeing a pirate ship on the horizon. 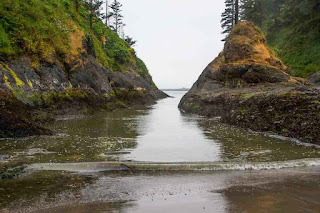 When you finally come out of the forest, you'll hit the steepest part.  Don't give up ... at least its a paved road.  This was part of the military defense installation protecting the mouth of the Columbia River during World War II. 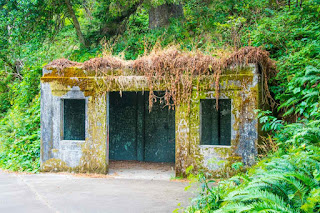 Just when you think you will never get there, the Cape Disappointment lighthouse comes into view.  Isn't she stately?  Too bad it never really did work well.  The light was too far back to be seen and ships still wrecked on the rocks.  That's when they built North Head further north, thus it's name, and a little further out.

Instead of tearing this one down, they installed a large bell for the ships to hear.  Unfortunately, in some artillery practice sessions at Fort Stephens across the river, it was smashed to smithereens.  Today the light doesn't work, but it's still used to monitor ship traffic and bar conditions.  Another light was placed to the left as you come up the hill. 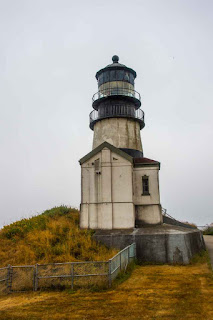 My shirt is finally drying out a tad, but there's no sun to be seen.  In fact, I haven't seen sun since I left Seaside.  It's been overcast, rainy and foggy every day. 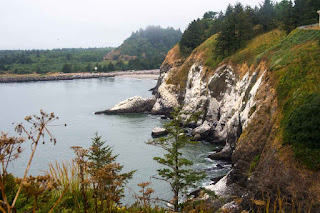 On the walk back to my car, I stopped for a few thistle pictures .... 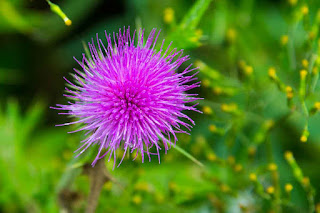 And this little guy who chirped and flitted around the bushes.  I'm pretty sure he was trying to entice a lovely lady into his territory. 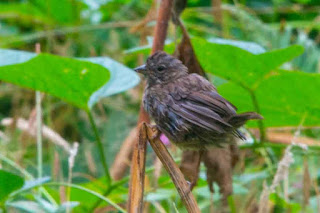 As I came around the corner, Pirates Cove came into view again ..... 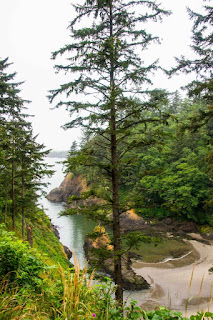 As did this lone tree on a rock with the tide still out.  See those pilings in the back?  They showed up again along with another piece of the railroad story I'll relate to you later. 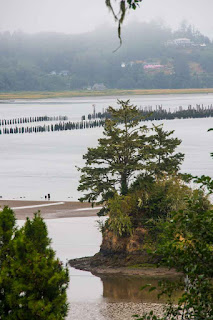 By now I'm hot from hiking and still soaking wet from the sprinklers.  I arrived back at my car just in time to see the Ranger drive off.  Uh oh ... sure enough, there's a ticket on my windshield.  But WAIT!!  I have a Discovery Pass and it's on the dash!!!

Wouldn't you know, you have to write your license number on it.  It's in writing so tiny I couldn't read it even with my glasses on.  A little irritated, I drove over to the Office in the State Park.  The nice gal said to write my license number on my pass and she would rip up the ticket.  When she asked why I was all wet, I couldn't really tell her I had wandered off the trail where I wasn't supposed to be, right?  Oh I tripped and fell near the water's edge.

Don't worry, I'm going back to North Head.  I'm bound and determined to find that location and get that perfect photograph!!!