Don't ask me how I know.  Okay, I'll tell you!!  It wasn't the slide-outs which seem to be the usual culprit when it comes to knocking yourself silly.

I drove out to Ledbetter yesterday morning to pick up a bear-free cache.  No, it wasn't there I got knocked silly, but I got back early enough to watch newbies try to set up tents and easy ups with at least twenty kids riding their bikes like crazy around the park.  When one ran into my car (no damage thank goodness) I figured I would do some laundry to drown out the noise.

Although I have a dryer, I don't use it much.  If I dried anything in the mechanical beast, I would never be able to get them on again.  I hang my shirts and levis all around the rig on every handle I can find that doesn't block the television.  One such handle happens to be by the entry door.

When it was time to take the dogs for a walk, I leashed them up and headed out the door, ducking around the levis and right into the television cabinet.  I've been whacked on the head a lot, but never has it been this bad.  The knot that instantly grew on my head hurt like the dickens!!

What to do??  I grabbed my trusty bag of peas and plopped it on my head.  As long as it was there, the pain was tolerable, but soon it was bed time.  I couldn't think of a way to strap it to my head, so back in the freezer it went.  An hour later I was wide awake with my brain throbbing.  Afraid to take aspirin (doesn't that thin your blood and make it bleed more?) I lay awake for two more hours.  Finally, in desperation, I took advil.

I'm happy to say that it still hurts this morning, but the big knot is gone.  The peas did the trick!!  I think I'll just lounge on the couch today while the fishermen go crazy in the salmon tournament.

The day before, I took Cooper for a walk down to the ocean.  He loves to run in the sand and water.  He doesn't exactly love the bath he gets upon our return.  Down the path we went, right over that snake!!  YIKES!!!!!  He didn't even see it!  I think it was a garter snake, blackish with white stripes the full length.  First time I've seen one on the coast. 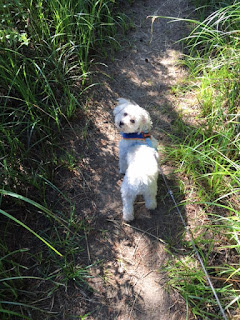 Why didn't I take Miss Jessie?  She's not dog friendly.  She becomes a rabid barking cyclone when she sees one, making it extremely difficult to handle two at once. 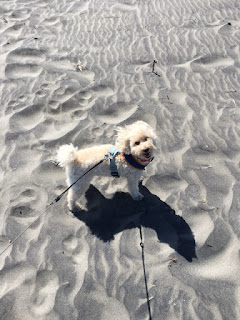 We immediately ran into this half eaten three foot long fish.  I have no idea what it was, but it looked kind of like a sturgeon.  The body was still intact and of course Cooper wanted to roll in it immediately. 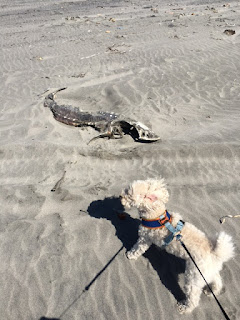 He loves the water, but I tried to keep him semi dry.  That white mucky stuff at the edge of the surf is hard to get out of his poodle hair. 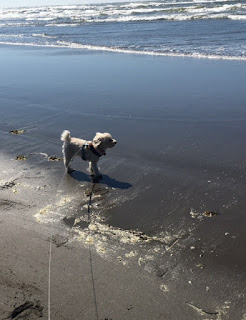 He ran straight out into the waves after a bird, got hit with a big one for his size and didn't care at all. He ran circles in the sand for ten minutes before laying down exhausted.  That didn't bode well for the trip back to the rig.  I had to carry him the entire way!!  Thankfully there were no more snakes. 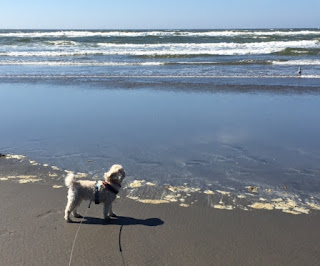 Lunch was a Gut Wagon in Ocean Park right around the corner from Jacks, the famous hardware store with everything you could ever need.  TuTu's Hawaiian BBQ had been on my list of dives to try. 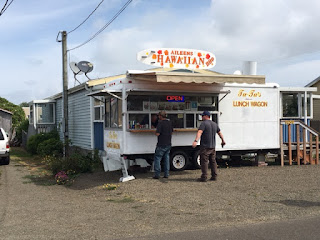 Boy was I glad I did!  I have to admit this picture doesn't do it justice at all.  There's a mound of beautiful white sticky rice under that teriyaki chicken and big pile of Hawaiian pulled pork, along with a side of macaroni salad and some just perfect not-too-sweet sauce.  Three meals for a measly $10.  I'll definitely be going back there!! 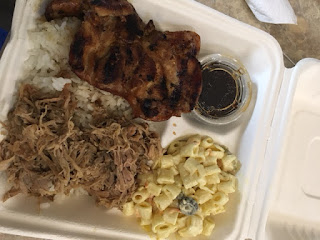 While up on the North end, I stopped in the town of Oysterville for a few pictures.  If I had lots of money, I'd buy the house that's for sale ... only $595,000.  It's a beauty!  If you're ever up in this neck of the woods, don't miss out on downtown Oysterville.