I'm just picking up the loose ends today as I scratch all my new mosquito bites.  Unlike the slow flyers in Alaska that you can swipe from the air, these guys are faster than Cooper with a dog biscuit and great at hiding so they can come out at night and feast on my blood.  I have three different types of mosquito spray ... none of them are working.

First thing this morning, I went toe to toe with my CO2 alarm.  It just decided to go off.  Come on ..... there was NOTHING!!  No hair spray, no neighbor's exhaust ... and it just wouldn't shut off.  I opened every overhead vent and turned on all the fans.  I hit the reset button six times.  When I was finally about to shoot it, as my neighbors were about to do to me at 5:15 in the morning, it quit and hasn't gone off since.  I double checked the date ... it's well within it's time stamp.  Hopefully I won't have to deal with THAT again!

The very rough beach has smoothed out a little with a few high tides and lots of rain, but I've only been out with my kites twice.  There's something about that half mile walk and stinky smell when I get there. 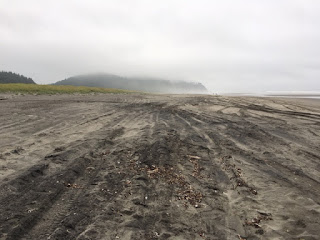 This is just a very small portion of the dead crabs dumped on the beach.  Unfortunately, they dumped them so far up (probably due to the very high tide that night) that they have never been washed away.  The water hasn't even come close.  Not even the birds have cleaned them up ... I guess they like their crab FRESH!! 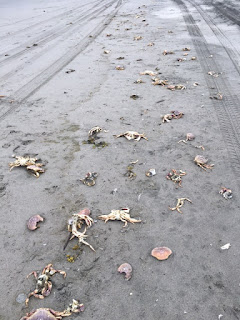 I did make one run to Pacific Bakery in Gearheart, but of course was too late in the morning to get the good stuff.  If you want good pastries, be there BEFORE 8:00 a.m. 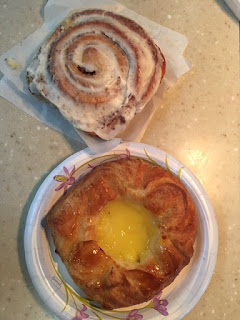 One of the celebrations I usually go to here is Jake the Alligator Man's birthday party.  Remember this guy?  He resides at Marsh's Museum in Long Beach.  It's a free museum of sorts, full of all kinds of weird things, including antique penny and nickel machines you can actually play. 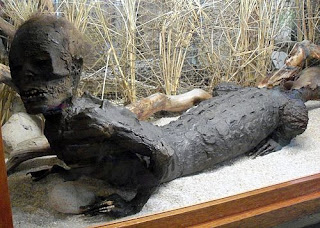 They went all out this year with the fire breathing-bagpipe-playing-unicycle rider, a new kind of skateboard made from a bicycle, along with all kinds of oddities, not unlike the museum itself.  It has become a circus of tattooed hippie children selling all kinds of crazy stuff in the park while the punk rock Alice Cooper type band screamed on ... there was no singing involved.  I did a slow drive by. 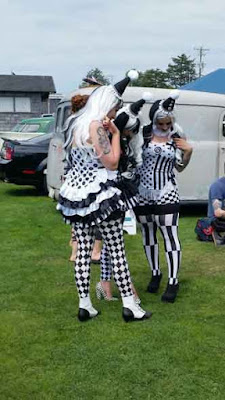 Where I DID stop was at a tiny place called Street Side Tacos.  I like little hole-in-the-wall places and that's definitely what this is, just a little out from the center of town. 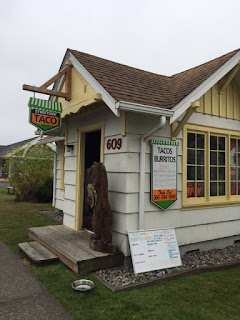 As you probably know, street tacos are tiny.  Those little tortillas you've seen in the stores lately?  Those are for these tasty morsels with delicious chicken, mango salsa and cilantro, called the Waikiki Special.  Not the Hawaiian version but the Waikiki Beach version that's down in Cape Disappointment Park.  It took me a long time to find out exactly where it was.  The State Park puts on little concerts there, with actual music and no head banging.  At any rate, these three tacos at $7 were SO yummy I'm going back for more. 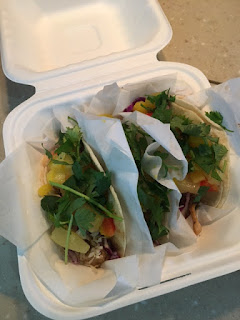 At long last the first half of those awful biscuits are gone.  I didn't throw them to the bears, I choked them down one at a time with a big bottle of water.  You know when you swallow and you can feel it go all the way down?  Yup ... that's these biscuits.  They may even have killed my desire to try another recipe. 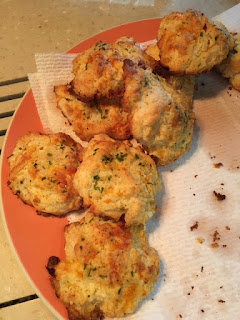 I'm going to work on my courage quotient today and see if I can up it enough to go back on the coyote hunt.  That's prime bear and mosquito territory.  I'm not sure which one is worse!!