As I travel around the country, I stop at all the usual touristy spots.  With geocaching, I stop at all the out of the way, weird and wonderful places there are to see that rarely get any attention at all.  Even if you don't bother to find the cache or sign the log, you're still going to have fun investigating these little known places.  Geocaching.com and downloading the app will get you going.

These geese were clustered in one spot in the early morning light on Willapa Bay.  I never would have found them had I not braved the mosquitos and walked the trail that rarely sees any feet.  Actually, I RAN the trail and won the mosquito race!!  HA!!!

There's another world out there beyond the little town of Chinook.  Who knew there were so many fields of cattle roaming around with pretty rivers everywhere!! 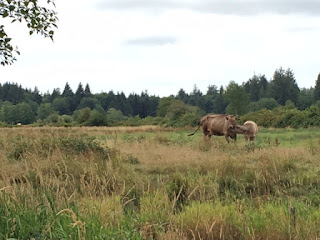 I even found the USS Plainview anchored in the mud of the Columbia River.  In 1960 the U.S. Navy commissioned a hydrofoil research ship, capable of speeds up to 90 knots, to explore the possibility of such a speedy ship for anti-submarine warfare.  Unfortunately, due to budget cuts, it was abandoned in 1978.  Eventually she was sold to a private party for $128,000 with the understanding it would become a fishing boat.  That never happened, and now she sits on a mud bar across from Astoria. 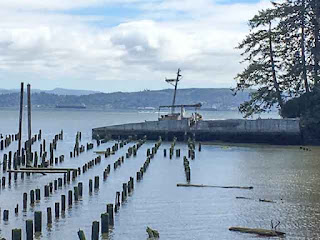 I have an idea you already know what THIS is!!  I saw LOTS of it on the peninsula this year!!  Just watch where you step. 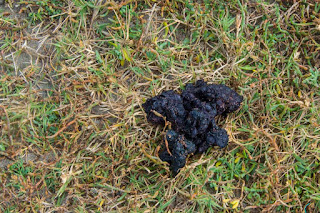 Ever wonder where all the old junk cars go?  On one geocaching foray around Chinook, I found not only the local scrap dealer but a beautiful long bayside road, virtually free of traffic and people.  What a neat spot to spend the day. 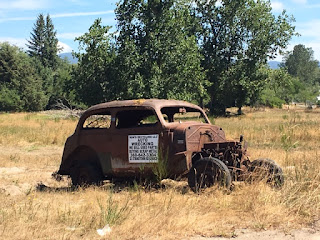 You never know what you'll run in to as you wander around the country roads looking for caches.  It happened on this day I saw a garage sale sign.  Normally I pass them right by.  THIS time I was just curious what they would be selling this far out in the boon tullies ... I mean WAY out.  There sat a mobile home with the most gorgeous view of Willapa Bay, and two little old people selling their stuff.

It was mostly glassware, but way in the back I spotted this chair, along with a beautiful television cabinet for $25.  Had I been able to get it in my Jeep, I would have had both.  The chair was a steal at $12 and it came home with me!! 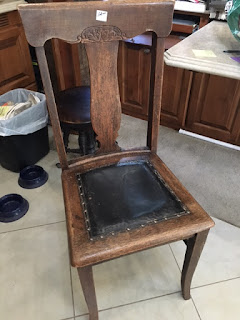 Just around the corner from the Cape Disappointment Lighthouse is the Harvey Allen Battery, built in 1904 as part of the military's harbor defense of the Columbia river.  It is open to the public at no charge.  As you wander through one of the concrete buildings, you will find photos like this one, showing what it looked like back in the day. 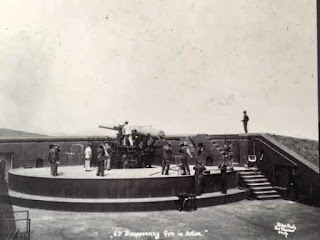 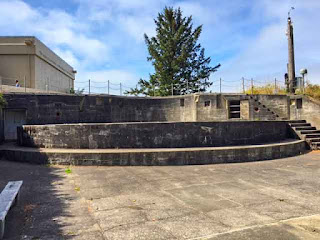 Most of the battery is open so you can wander in and out along the dark passages, getting the feel of what it might have been like to be stationed here. 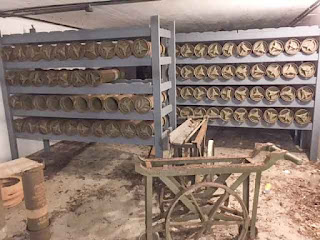 One of the paintings inside still exists, thanks to the plexiglass covering.  Cede Nullis ... Yield To None. 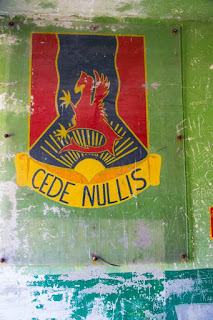 There are a few other outbuildings that look like guard houses.  This particular one was probably the latrine.  There's a cache out there somewhere ... the hint said fern near bunker.  Let me tell you, there are a million ferns here, along with lots of berry bushes to bite you on the arms while you are looking.  After sneaking around for thirty minutes, I gave up and headed up the trail.  There it was, under the FERN.  I can't say this isn't frustrating sometimes!!  But oh the elation when you FIND IT!! 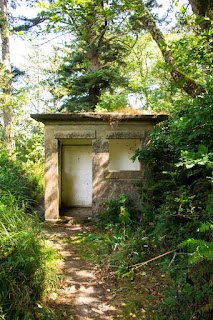 While there, I got caught by a Mom and had to explain what I was doing.  She was so excited ... her two young daughters just had a pirate birthday party with a treasure hunt.  This was right up their alley and they would learn lots of history as a side benefit.  She downloaded the App.  YAY!!!  Two new converts!!

By the way, the Scanner app I use is 5-0 Radio Scanner, along with Where Am I, another app that gives me the required County information.  It also gives you GPS coordinates if you get lost.

Today I'm on the hunt for some wind.  Unlike Long Beach, so far there's not a breeze to be had!!