That's a lie.  There will be at last two more Sunday Markets and a couple of Ilwaco's in there.  They don't have them where I come from, so I need to get my fill while I'm here.

Called Attack Of The Butterflies, this artwork was created by Bill Dodge.  His paintings are found in houses around the world, including Joan Fontaine and Beverly Sills.  He was even invited to paint an Easter Egg for the White House Annual Egg Roll, which now resides in Nancy Reagan's personal collection.  Who knew they even DID that??? 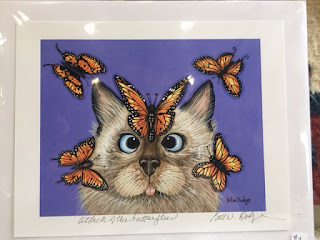 If you are an "All My Children" or "Falcon Crest' fan, his paintings were a permanent part of the sets.  He has been recognized by the Columbia River Maritime Museum and has painted many pieces for them including hand signed prints, note cards, jigsaw puzzles and other collectibles.  If you saw one of his prints, you would instantly recognize it.

This is his own cat, although not really named Muffy, who hoards the cat food.  This one is named "Mine! All Mine".  At 80 years old, he's at the market every Sunday selling his works to benefit the Museum.  These two will hang in the Lost Horse Ranch Kitchen. 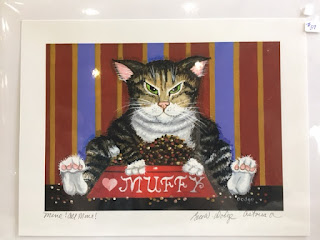 As I have said previously, go early, get a good parking spot at the top and walk the length before noon when it becomes too crowded and all the good veggies are gone. 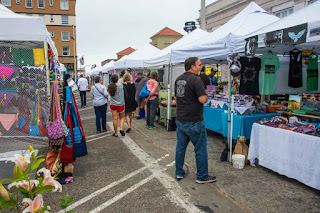 Of course I went straight to the food vendors at the bottom of the hill for my spinach hand pie breakfast.  WHAT?  They are gone again??  I wandered around the tables looking at everyone else's plates and got a great recommendation for Sue's Awesome Crab Cakes.  Cooked on two cast iron griddles, they MUST be good because the line is 8 people long. 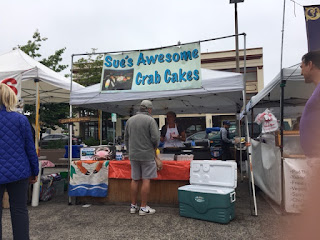 I waited ... it was worth it!!  Sue has awesome crab cakes.  They take a little time to cook even though she was going as fast as she could.  Finally it was my turn ... I dropped in a little roasted red pepper sauce.  OMG!!  You've GOT to try these if you like crab cakes.  They were the bomb!!  It even makes me want to try and recreate both the cakes and the sauce.  I almost licked the paper container!! 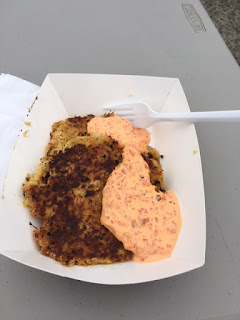 Now for some Sea Star gelato ... peach cobbler.  OH YEAH!! You can tell from the color, there are lots of peaches in there and it was delicious.  I got the $3 small version. 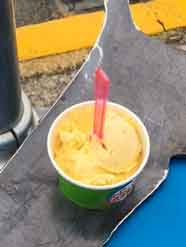 Also at the bottom end of the market is a guy selling garden art, although most of it is fish and cranes.  Even though reasonably priced, not many fish would really work at the Lost Horse Ranch in the desert.  A kitty on the other hand, would fit in nicely in the back yard with all the quail. 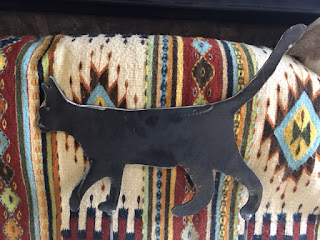 So here I am at the latest RV parking lot, in a holding pattern until the guy behind me moves on Wednesday morning.  Like a predator in the bush, I'll be parked in my car across from him at 6:00 am just waiting to pounce on that perfect site.  Having finally recovered from the MOVE STRESS, I covered myself in greasy mosquito spray ... they are REALLY bad here ... and headed out through the bushes.

I was pretty shocked when I hit the beach.  It looks nothing like it did the last time I was here.  The water was almost up to the grassy banks, although the tide was receding quickly.  There are huge holes, lumps and bumps along the entire length and sand so soft I wouldn't even try driving on the WET stuff.

Tracks there were 6 inches deep where some nice guy had driven along throwing out dead crab for a hundred yards.  What a stinky mess.  What's wrong with people?  I know the critters will eat this up, but really, isn't there some place else you can dump your dead crab??  Or at least leave them in one pile and not string them along, ruining the entire area!! 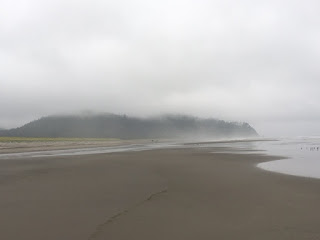 So I doubt there will be any kite flying at THIS beach until a really high tide washes it clean.  I'll have to drive down the way to the next entrance and hope it's in better shape ... or wait until low tide and fly at the water's edge, always an interesting dance to stay out of the incoming waves.

My next find ... a secret local hideaway!!